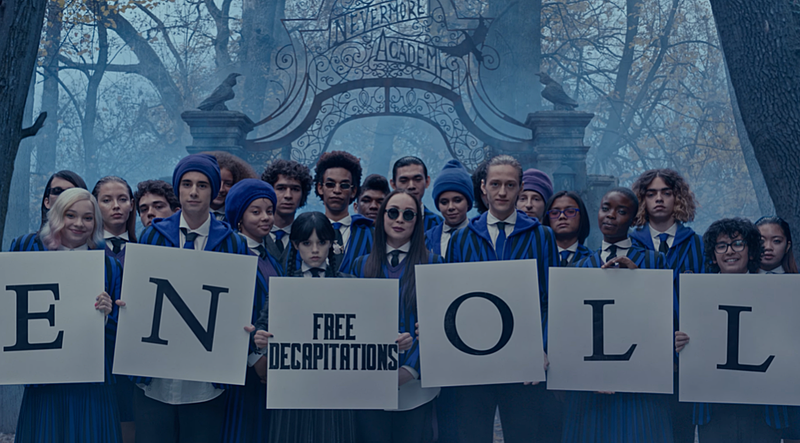 We're very curious to see Tim Burton's forthcoming Addams Family spin-off, Wednesday, when it hits Netflix later this year, and a brand-new trailer for the series has us more curious than ever about the world Burton's building here.

So, the Nevermore Academy (once attended by former Addamses Gomez, Morticia, and Cousin It, plus some guy named Edgar Allen Poe) appears to be Wednesday's version of Harry Potter's Hogwarts Academy, complete with matching uniforms, paintings coming to life on the walls, and students openly walking around whilst drinking blood (they did that in Harry Potter, right?).

The show itself will revolve around Wednesday (Jenna Ortega) navigating her years at the Academy, while also bringing in Addams Family mainstays like the aforementioned Gomez (Luis Guzman) and Morticia (Catherine Zeta-Jones). Previous Wednesday Addams Christina Ricci is also said to be making an appearance, though she'll be playing an entirely new role.

Wednesday has yet to receive a specific release date, but will debut on Netflix sometime before the end of the year. Stay tuned for further updates on this one as they become available. In the meantime, make sure you've enrolled at Nevermore for the Fall semester. We hear those classes fill up quick.