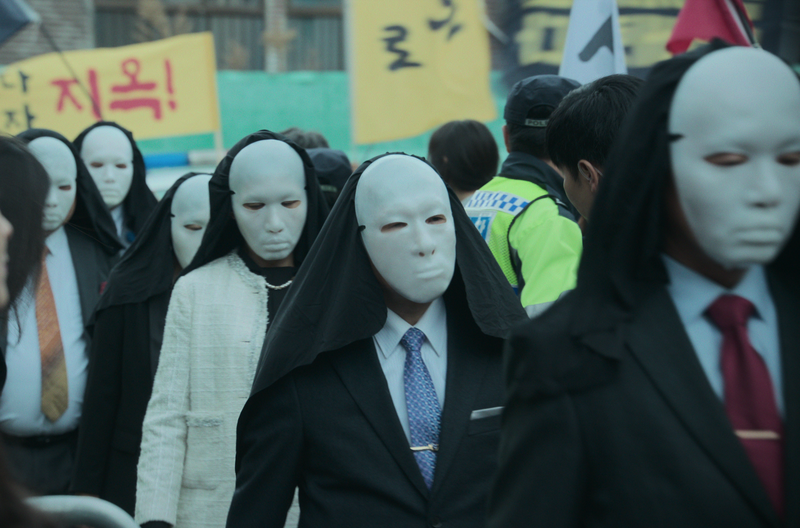 After the wildfire worldwide success of Netflix's Squid Game, the path towards Korean TV domination continues unabated as the streamer unveils the final trailer for the new K-series Hellbound. The show hails from South Korean animator-tuned-live-action director Yeon Sang-ho, who made the modern classic zombie film Train to Busan as well as its animated spin-off Seoul Station and more recent sequel Peninsula.

All the Squid Game die-hards out there jonesing for another Korean thriller series with scary people wearing masks are in luck, as Hellbound focuses on a creepy new religion/evil cult that appears to have the ability to summon giant muscular demon monsters straight outta hell. Sign us up!

Here is the official synopses:

A story about otherworldly beings who appear out of nowhere to issue a decree and condemn individuals to hell. These supernatural events cause great mayhem and enable the religious group The New Truth to grow in influence. A few people, however, become suspicious about its activities and begin investigating its involvement in mysterious events.

This show looks like an all-around blast, combining occult mysticism with modern-day political concerns. The creatures also look fantastic, much more of what the Deviants in Marvel's Eternals should have looked like (i.e. actually scary). While Peninsula did not earn the same raves that Train to Busan did, here's hoping that Yeon Sang-ho's visionary nature translates to television and allows him to tell an epic horror tale on a large-scale canvas.

All six episodes of Hellbound will be debuting on the streamer next Friday, November 19, for you to binge surrounded by burning candles and pentagrams.