My Pet Monster: Exploring the Set of GRUMMY

Processing trauma through a whimsical and bittersweet fairytale. 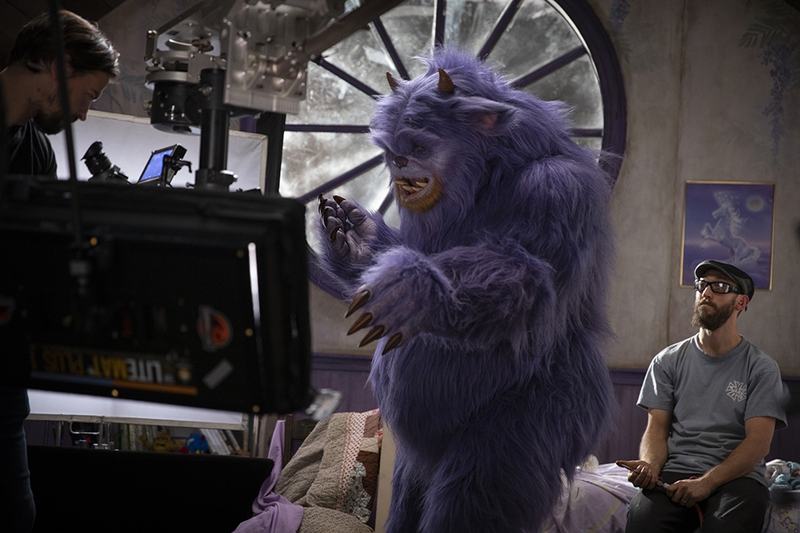 A giant furry monster is staring at me. Sitting atop a grassy hill, an empty chocolate bar wrapper falls off his very large, very purple lap, and he turns to look at a little girl, bedecked in a plastic tiara and playing in the long amber grass, trying to catch fireflies. He lets out a low growl. The girl turns to look at him, a bit irritated but not at all scared by the seven-foot-tall beast. 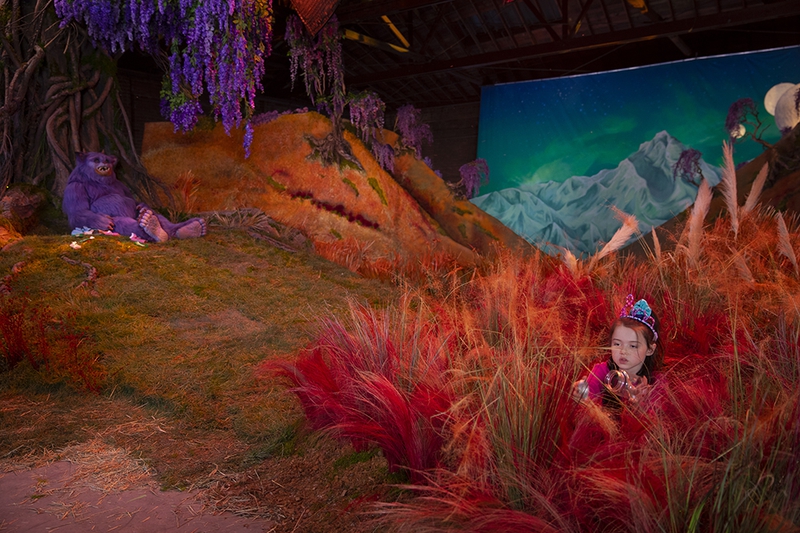 "CUT!" Shouts R.H. "Chip" Norman, and he begins to give notes to the monster and the little girl. The monster is Grummy, the titular character of a new fantasy/horror short from the mind of Micheline Pitt and co-directed by Pitt and Norman - her husband. A former mentee of Werner Herzog, Norman has written and directed several shorts, including Hajji, a film about the Afghanistan war, starring Ross Marquand (The Walking Dead) and Dayo Okeniyi (The Hunger Games). Pitt, perhaps most well known for her fashion design and popular vintage-inspired clothing lines — Vixen by Micheline Pitt and La Femme En Noir — is a multi-disciplinary artist and animator. She is also a staunch advocate for sexual assault survivors and serves as a member of RAINN's National Leadership Council.

In fact, it was her own childhood experiences with abuse and sexual assault that inspired the story of Grummy. "I was this little girl," said Pitt. "I used my imagination to escape from an abusive childhood; I used books, movies, and toys to get away. If I didn't have my imagination - if I didn't have these things - I don't think I would be here today. Grummy is a story of how fantasy saved my life."

Leaving behind the lush amber grass, large knobby tree, and twinkling fireflies (which are actually practical lighting effects) that fill the majority of the large downtown L.A. warehouse where Grummy is being filmed, Pitt guides us through to the smaller set - the little girl's bedroom. 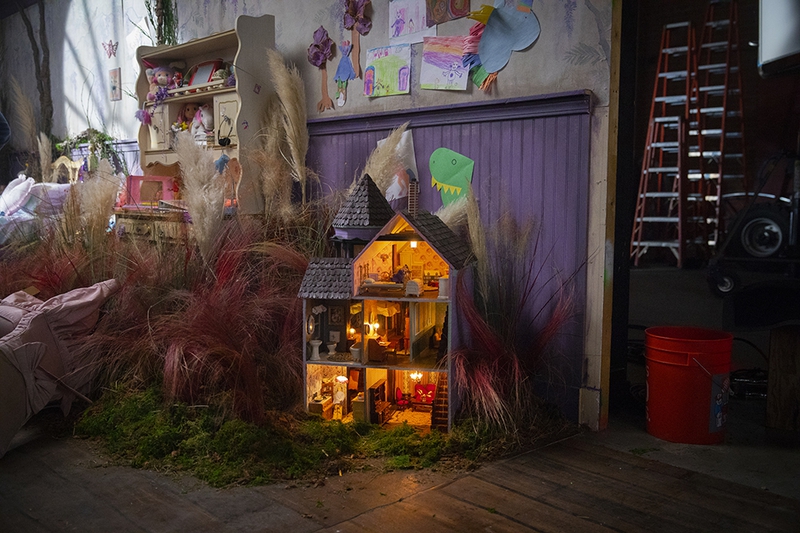 The bedroom is fully decked out in the trappings of the late-eighties and early-nineties (1988-1991 to be exact) but shrouded in melancholic purples and greys that feel evocative of Guillermo Del Toro (one of Pitt's favorite directors.) The smaller, cluttered room provides a gloomy contrast to the vibrant openness of the field that represents the young girl Sarah's imagination. Pitt notes production designers Nicole Balzarini and Doug Williams' intricate attention to detail. "There are a lot of things in this room that I had as a little girl," she says. "I wanted it to feel really authentic to my own childhood." In fact, she even spent a lot of the development time scouring flea markets, thrift stores, and eBay to find the exact toys she once owned. 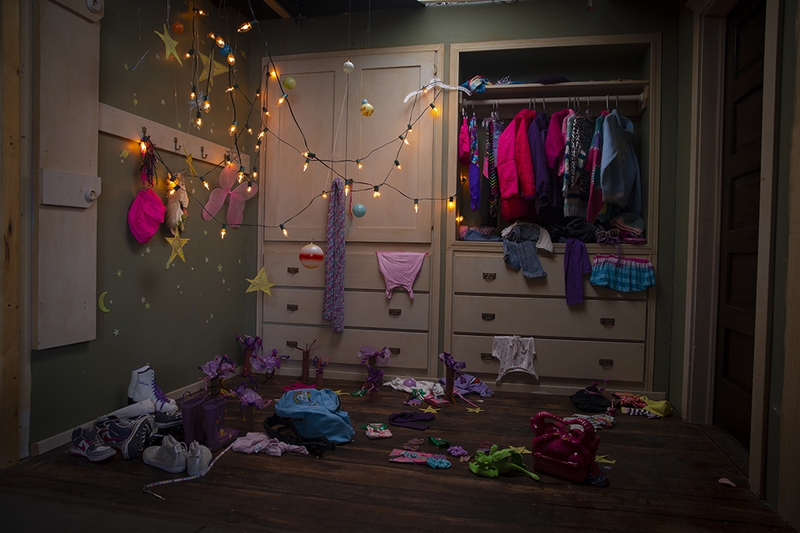 However, one of the challenging things that Pitt focused on in the writing process was figuring out the right way to tell such a personal and difficult story. "I spent two years really digging deep and going through and processing everything," says Pitt. "Figuring out how I could tell such a hard story in a way that would feel whimsical and beautiful but also still get the heartbreak across. Because not every fairytale has a happy ending. Sometimes it's bittersweet. And I feel that's very much what Grummy is - it's a very bittersweet fairytale."

Another challenge of such complex subject matter was making sure lead actress Violet McGraw (eight years old during filming) was kept protected and safe. "It definitely is challenging," according to Pitt. "We have to communicate with her mom and figure out a way to communicate to Violet, how to help her understand and break the story down so that it still protects her. Because she's a child, and she's impressionable. And blocking was a huge deal for us… Separating stuff so she's not there, and we have a dummy stand-in. There's a lot of stuff that we were very cognizant of and aware of and we worked heavily with Jackie [Violet's mother.] It was a collaborative effort." 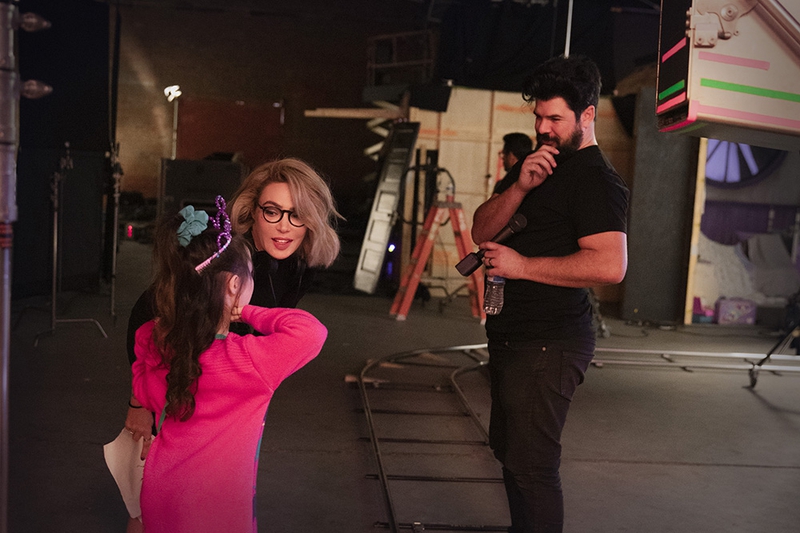 The final challenge was to tell her story in a way that felt authentic but also kept in mind other victims of abuse and their potential triggers because she wanted to create a space for survivors to feel less alone. "With this story," says Pitt, "I wanted to go about it in a way that would be very respectful for anybody that might have had trauma. That they could watch this and process it in a way that wouldn't be too triggering, but hopefully make them feel like they weren't alone. A lot of people that have donated time to this project have been victims of abuse and people that are parents, and this has meant a lot to them. It's been powerful because it feels like this is how children survive sometimes - by going someplace else. And I think that children can relate, and people can relate, to going someplace else and surviving in that place - and existing in that place - and finding a home there."

Lead actress Violet McGraw, (Doctor Sleep and Haunting of Hill House), who is quickly becoming one of the go-to child actors in horror, spoke about how she taps into her emotions when she's acting in a particularly scary or upsetting scene. "Like, what do I think about? Well, I have three things. I think about Ruby [her favorite stuffed rabbit]. Because she's the most important stuffed animal that I've ever had. And I also think about… I had this chocolate lab, and his name is Cody. We had to put him down when I was six. He also makes me sad because my parents won't let us have pets because we're never home, because we're always working. And I also think about my sister Maddy, because I play with her all the time. And sometimes when I'm in another country or state – I always think about her to make me sad because I love playing with her, and we have such great imaginations together."

And while she's not necessarily allowed to watch every part of the finished product, she enjoys acting in horror films and programs. "I like them," says McGraw. "Especially working on them 'cause I love all the CGI and stuff, and all the ghosts, and all the makeup. It's so cool, especially on The Haunting of Hill House because of the Bent Neck Lady. They made this bent thing and glued it on her neck, it was so cool!" And when asked if she has her own sort of Grummy now, she brings up her beloved Ruby the Rabbit. "It kind of reminds me of Grummy… 'cause Grummy can also turn into a toy, like a small-medium stuffed toy. So I was like, 'Ruby's my little Grummy now.'" 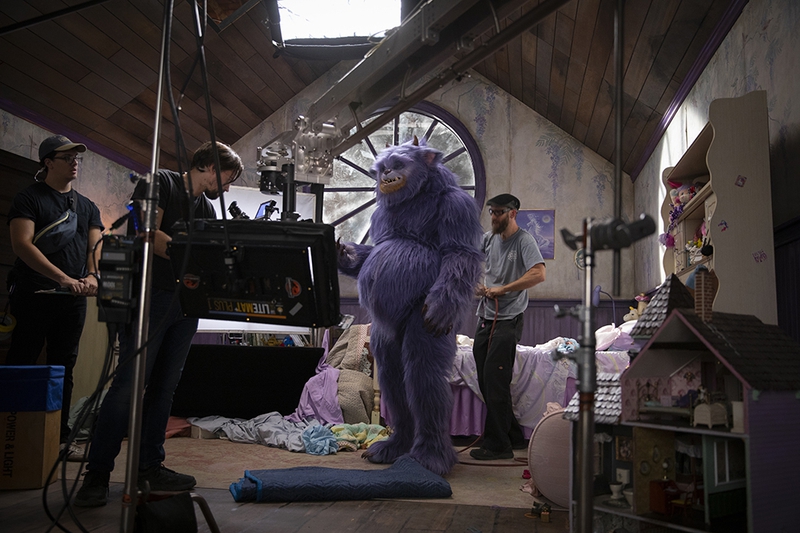 Which brings us to the monster himself. Standing around seven feet tall, with a face that includes articulated eyebrows, ears, and mouth, the Grummy suit was taken from illustrations drawn by Pitt and brought to life by renowned creature effects artist Kevin Yagher (Child's Play, A Nightmare on Elm Street 2.) Pitt describes Grummy as "a mixture of some of my favorite toys growing up and then something completely original. Maybe you'll see a little 'Popple' in there. Because when I was a little girl, I had my pet monster, my Grummy. We worked with Kevin and I just did a sketch of this toy, and he ended up doing a bunch of drawings. He's like 'I really liked your toy design, and I just tweaked it a little bit, but I kept it.' And when he did the Grummy design - his interpretation of what it would be as a physical entity - he nailed it. The first design he showed us, he just got it." 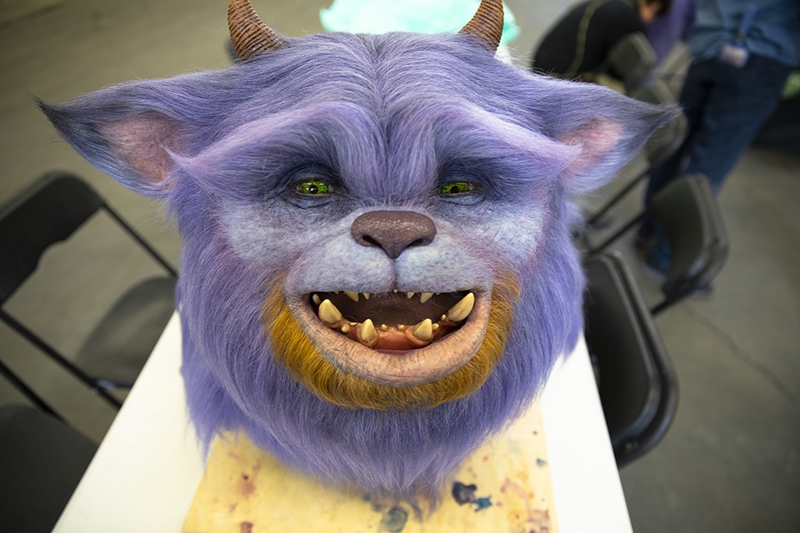 Yagher, when asked about how he became involved with the project, brought up his experience of getting to know Pitt and her lifelong love of monsters. "Micheline told me that she went around with a Crypt-Keeper and a Freddy doll, as a six-year-old," he says. "Now that I'm at the twilight of my career - I want to help young people. I have opened myself up to helping filmmakers. And I thought they were going to say they wanted to borrow a couple of bodies or some arm or bones or something I had in the shop, but then they came up with Grummy which was a huge thing to do."

Huge, but not impossible, especially after Pitt mobilized her fanbase for a successful Kickstarter, which raised enough money for Yagher to create an incredible practical monster, performed by actor Alexander Ward. We hoped to get to speak with Ward, but the demands of production and a particularly pesky passing train prevented us from speaking with him for more than a few seconds. But perhaps it's best this way, to preserve the illusion. To keep Grummy, as Grummy as possible: a perfect purple monster helping a child survive a far less than perfect world.

Grummy is now available to stream and has been submitted for Academy Award consideration in the shorts categories.