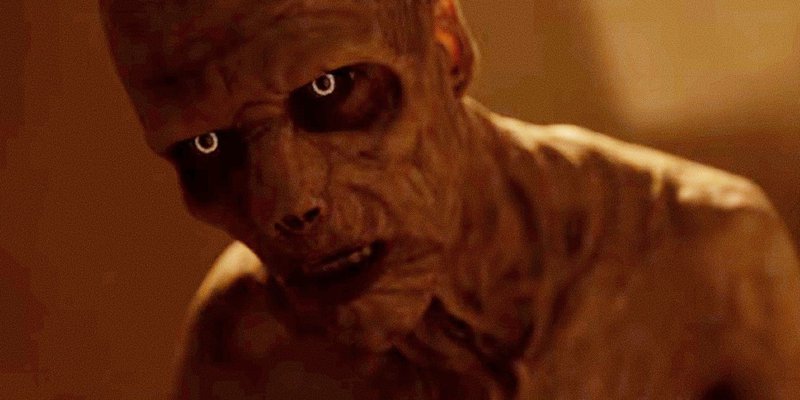 Javier Botet as the apeth in HIS HOUSE.

Welcome to Monster Anatomy, a new monthly column in which Meagan offers a peek behind the curtain at what goes into creating modern movie monsters. Read them all HERE.

Remi Weekes' feature debut, a horror movie, holds the rare distinction of earning universal praise from critics as well as a BAFTA award win for Outstanding Debut by a British Writer, Director or Producer. His House tells a heart-wrenching story of a refugee couple attempting to adjust to their new life in an English suburb after making a perilous escape from war-torn South Sudan. That in itself makes for a gripping horror tale, but Weekes balances grim realism with folklore and gives a twist to the haunted house format. Bad memories and trauma followed Bol (Sope Dirisu) and Rial Majur (Wunmi Mosaku) across the sea, creating the perfect weapon for the entity lurking within the decrepit walls to use against the couple. Instead of ghosts, it's the past and an unnerving night witch that haunts this couple.

Bol and Rial approach their assigned residence in opposite ways. Bol attempts to assimilate into the neighborhood and adopt British customs, from singing in pubs to dining with silverware. Rial holds fast to her heritage, a comforting armor in an oft hostile environment. It illustrates a divide between the couple, but it's what's unspoken that festers. From the first night, Rial retreats to bed and leaves Bol alone in the dark with his thoughts. He's tormented by strange sounds and eerie visions, much tied to the loss of their daughter, Nyagak (Malaika Abigaba), during the flight from South Sudan. When Rial comes to experience the paranormal activity herself, she quickly deduces it to be the workings of an apeth, a Dinka term for witch, or night witch.

Rial recounts a story from childhood in which a poor man from her village longed to have a house of his own. To achieve it, he began to steal from others, an apeth unwittingly included among them. When the man built his home, the apeth moved in and haunted him. This brief exchange between husband and wife offers the film's most extensive exposition on the supernatural entity feeding off their pain. Weekes intentionally paints the apeth in broad strokes. Much like folklore itself, the night witch is vague and fluid. His House doesn't spell out too many concrete rules for its night witch, but it suggests that it cannot cause direct harm. Instead, the night witch wants to exploit its prey on a psychological and emotional level, pushing their victim to self-harm or inflict violence.

British anthropologist Godfrey Lienhardt dedicated much of his life studying the Dinka people, native to South Sudan. His 1951 paper, "Some Notions of Witchcraft among the Dinka," presents a nebulous notion of apeths and witchcraft. While it's an extensive essay on the varying levels of witchcraft, totems and beliefs, it's interesting to note that the apeth is often referred to in the masculine, like "he who bewitches at night."

That distinction comes into play late in His House. Throughout, Bol and Rial are tormented by visions of their past. Feral manifestations of Nyagak terrorize Bol at night, and Rial gets plunged into lucid nightmares of her village. It's not until the final act that the apeth final reveals itself. The Witch promises to return Nyagak to the couple for a price, and Bol's guilt over stealing then losing Nyagak drives him to succumb and cut his arm. The intent is to self-sacrifice as atonement for his grave sin that attracted the apeth in the first place. His blood spills onto the floor, formally inviting in the apeth.

The house rattles, and the floor cracks open, revealing a pit of sand. From it emerges a gaunt, hairless apeth with glowing eyes. The witch's ghastly grin spreads across its lipless mouth, eager to claim Bol as his as it digs into the gaping wound on Bol's arm.

The emaciated yet imposing entity is played by horror mainstay Javier Botet, to whom modern horror fans owe a massive debt for instilling endless nightmares. After breakout found footage hit REC, the lean 6'7" actor quickly rose the ranks to become one of the most in-demand actors portraying movie monsters today, thanks to his unique physicality.

The design and creation behind the Witch's makeup belong to DDT FX; a special effects company Botet worked with previously on Crimson Peak, Malasaña 32 and Mama. The Witch's look, created by creature designer Daniel Carrasco (A Quiet Place Part II, Crimson Peak), fits into Weekes' loose interpretation of the apeth. The prosthetics and dentures Botet dons make for a genuinely ghoulish being. Still, the no-frills creature design with neutral coloring supports the idea that the apeth defies easy classification and could assimilate into any culture. The Witch seems as malleable as folklore itself. The apeth's physical appearance heralds in a potent climax, but the witch's true power lies with the paranormal manipulations that led to its summoning.

Botet revealed in an interview with Without Your Head podcast that the Witch's grand entrance was as intimating to film as for viewers to watch. In keeping with the director's desire to complete as much on camera as possible, the sandpit formed on the kitchen floor was as practical as the monster. Production built a pit into the set, Botet climbed in, and they filled it with sand up to his neck. Then, once the camera was ready to roll, they covered the actor's head with sand and gave him a count of five seconds before emerging from the sand in character. Just the thought of getting buried in suffocating sand for any amount of time is enough to induce anxiety, let alone performing through it.

The visual imagery of this moment, the physical summoning of the night witch, packs a punch in an already emotionally powerful debut by Weekes. Through the neutral design of the apeth, rendered effectively chilling by DDT FX's work and Botet's unsettling movement, Weekes drives his monster-as-metaphor home. The night witch, a folkloric representative of Bol and Rial's culture designed for maximum terror and relatability, forces the couple to confront their guilt. It bridges the chasm between them as Bol and Rial learn to live with their ghosts.