Into The Mind Of A Monster: Celebrating Miki Saegusa, Godzilla’s “Final Girl”

A tribute to the most recurring human character in kaiju history. 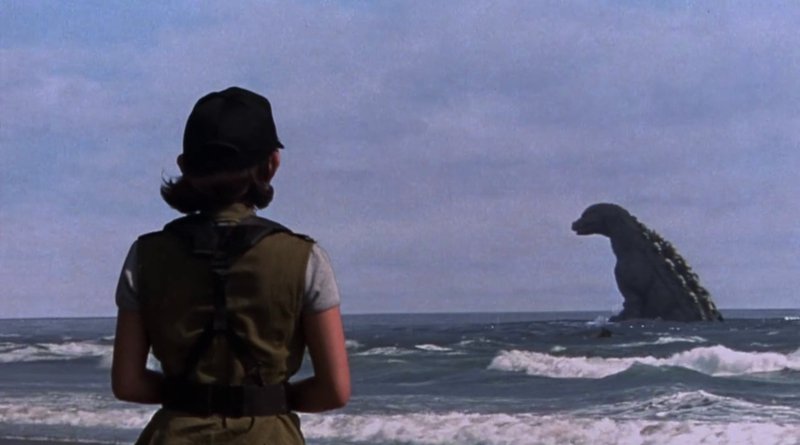 Miki Saegusa in Godzilla vs. Destoroyah.

Across literature, art and politics, it is often remarked upon that few are privy to the thoughts of a king.

…and in the case of the King of the Monsters, that fact holds doubly true.

Yet, for nearly a decade, one human woman had access to a realm few would dare tread: the mind of Godzilla. Her name was Miki Saegusa… and it is high time we honor her legacy.

However, to fully appreciate the impact of this character and Megumi Odaka, the actress who played her, we must first dig our claws into a little kaiju history. Following the introduction Godzilla in 1954, the filmgoing public was immediately transfixed by a world of giant monsters. Under the guidance of film company Toho, the kaiju subgenre would become a definitive pop culture benchmark, creating a complex cinematic universe that would make even Marvel blush. During that initial run of films, known as the Shōwa Era (in reference to the reign of Emperor Shōwa), Toho would produce upwards of fifteen Godzilla features, as well as various off-shoots and movies about other monsters set “in universe.” This zeitgeist-defining run not only would introduce a bevy of characters that have become part of our genre lexicon, but would provide the basis for essentially everything we know about the world of kaiju. As many of these movies became celebrated late-night cable and drive-in fare, the visage of Godzilla and his monstrous mates came to be so embraced by the public that by the time the franchise hit the ‘70s, the character was less a behemoth to be feared… and more a family friendly icon. While it’s unclear whether Godzilla’s aesthetic shift toward the softer side affected audiences or if it was just twenty years of market saturation, ticket sales eventually became uneven. Thus, with the release of Terror of Mechagodzilla in 1975, Godzilla returned to the sea for a long nap.

With the rise of the ‘80s, pop culture was unquestionably experiencing a horror boom. Even as slashers were seizing the scene stateside, Toho was hard at work scheming a way to introduce their most celebrated creation to a new generation… and give the King of the Monsters his teeth back in the process. In 1984, Toho released The Return of Godzilla (released in the US a year later as Godzilla 1985), simultaneously bringing the titular monster back to his horror roots and ushering in the Heisei Era in the process. Serving as a franchise reboot, The Return of Godzilla ignored all that came before it with the exception of the events of the original 1954 Godzilla (not dissimilar to how Blumhouse handled Halloween 2018). No longer tied to complicated and expansive mythology, this reset allowed Toho and the filmmakers to head into bold new directions… and let Godzilla do what he does best: rule.

No longer a benevolent protector of mankind, Godzilla’s return to his darker, antagonistic ways meant the world was once again put on notice. And thanks to the success of The Return of Godzilla at the box office, it was assured his reign of destruction would continue. As such, 1989 brought a follow-up, Godzilla vs. Biollante, and with it, the arrival of Miki Saegusa.

Introduced as a woman with unique psychic abilities, Miki is first shown working as an assistant to a geneticist who inadvertently creates the eldritch-looking plant monster Biollante after combining Godzilla’s DNA with the DNA of a rose and his late daughter (as you do). Draw into battle with Biollante due to its unnatural existence and the call of his own genetics (no one ever said these were low-concept), Godzilla arrives on the scene… and in the process, Miki discovers that her psychic abilities not only are enhanced in his presence, but that she may share a unique telepathic connection to the legendary kaiju.

Using her psychic powers to help steer Godzilla away from several near moments of destruction, Miki is witness to Godzilla’s defeat of Biollante and watches as he returns to the ocean, now with slightly more understanding than most of what motivates the gargantuan creature.

It could have been a one and done role. Goodness knows we’ve seen enough horror protagonists pop in for a franchise installment only to disappear from the landscape once the credits have rolled. But in establishing the link between Miki and Godzilla, Toho realized that they had stumbled onto something special. Beyond just the potential for developing story arcs, Miki Saegusa represented something Godzilla had never had before: a human counterpart.

Originally created by Shinichiro Kobayashi as part of a story writing competition for a sequel to The Return of Godzilla and reimagined into her eventual onscreen iteration by filmmaker Kazuki Ōmori, the character of Miki Saegusa offered a slice of the metaphysical for kaiju fans, not only raising the question of what makes a monster… but what makes their mind. Cast in the role, actress Megumi Odaka was given the challenge of bringing nuance to a character whose emotional counterpart was a stories-tall lizard.

Known previously for her role in Japanese fantasy film Princess from the Moon (in which she starred alongside the legendary Toshiro Mifune) and subsequently as a pop music star, Odaka’s vibrant realization of the character of Miki Saegusa became a defining characteristic of the Heisei Era of films, and in many ways made the franchise as much hers as Godzilla’s.

From Biollante onward, Odaka would appear as Miki Saegusa in every entry of the Heisei Era, ending with their conclusion in 1995’s Godzilla vs. Destoroyah. Sometimes, such as in 1991’s Godzilla vs. King Ghidorah, wherein Saegusa participates in a time travel expedition spurned on by aliens to destroy Godzilla, the character would feature prominently in the story. Others, like 1992’s Godzilla and Mothra: The Battle for Earth, where the character served solely in an advisory capacity to the government, she’d be more ancillary. But, come hell or high water, Miki was always there. 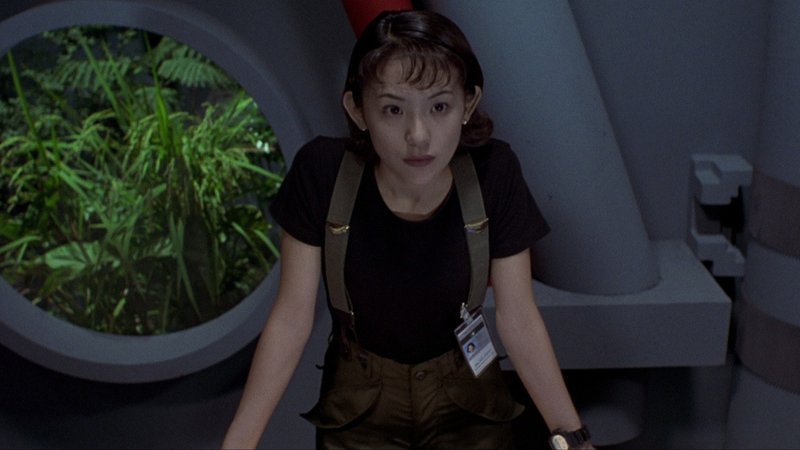 More so, as the character continued to be exposed to Godzilla’s misadventures from film to film, she had a remarkable evolution in her relationship with the kaiju king. Introduced to Godzilla as a threat in Biollante, Miki’s psychic connection to the monster encouraged her to want to understand him, and as the franchise progressed, her fear transformed into empathy. The character’s finest hour probably comes in 1994’s Godzilla vs. SpaceGodzilla, when the government tries to manipulate Miki to use her psychic abilities to help them weaponize Godzilla. It is with this revelation that she comes to realize that perhaps the truest monster of all is the folly of man.

With six appearances across the franchise, Miki Saegusa (and by extension, Megumi Odaka) holds the record as the most recurring character in kaiju history. What’s more, with an evolving and allegorical arc, as well as a heavy significance placed on her relationship to Godzilla himself, there’s little denying she holds an important place in the franchise’s mythology.

In short, for all extents and purposes, Miki Saegusa is Godzilla’s final girl.

… and yes, I understand that the moniker of “final girl” outside slasher movies can be debated, but the sentiment remains: for this particular era of Godzilla, Miki is the opposite side of his coin. Just as Laurie is connected to Michael or Nancy to Freddy, for six films these two were linked… and yet Miki rarely gets her due.

Time and again we see articles and listicles declaring “favorite final girls” and “horror’s best heroines,” and Miki is often nowhere to be found – which is particularly odd when we consider the fact that her counterpart is one of pop culture’s most beloved monsters.

While I do realize that there’s oft a mantra surrounding kaiju cinema wherein fans like to claim they don’t particularly care about the human characters and that they just “want to see monsters fight,” I will admit that I’m one of those weirdos who not only likes the people stories in these movies… but needs them. To see humanity contend with something so grandiose and incomprehensible brings a tangibility to that world. More so, watching a character like Miki’s initial fear grow into empathy and the eventual embracing of humanity’s insignificance… that’s an epic journey. She’s the conduit. She makes Godzilla more than a special effect – she makes him the harbinger of our mortality and place in the world.

…and that’s cool as hell.

Which is why, outside of the deeper kaiju fandom, I’m always surprised that the character isn’t celebrated more. Granted, I’m not naïve. I understand that Miki’s omission from more mainstream horror conversations is the culmination of several factors, including the bias of a Western lens. The sad truth is that most round-ups of horror heroines tend to exclude non-English language foreign cinema and undeniably veer toward white performers. This, combined with the fact that many of the Heisei Era Godzilla movies frequently are out of print in the US and hard to see stateside, unfairly contributes to this magnificent character and the performer behind her not quite getting their due.

Still, even with the obstacles of problematic bias and cinematic accessibility, Miki’s imprint on the Godzilla franchise is undeniable. The current American/Legendary Monsterverse owes a great debt to the Heisei Era’s intricate interweaving of the kaiju and their cohabitation with humans, and a third act reveal in the recent Godzilla vs. Kong serves as a major tip of the hat to an adventure from Ms. Saegusa’s time with the King of the Monsters. (No spoilers!)

While Miki Saegusa is far from forgotten (indeed, IDW recently included the character in a 2012 comic where she was running a psychic institute), the release of the new entry felt like a good a time as any to take a moment and pay homage to a character who has more than earned her place in the Horror Hall of Fame. While many genre protagonists can claim a knife-wielding maniac as their adversary, only one spent a decade inside the mind of Godzilla and lived to tell the tale. As such, it’s high time we made sure we put some respect on her name.

This one’s for Miki Saegusa and Megumi Odaka.

I’m thinking of you. And I bet Godzilla is, too.