Loved By Death: A Tribute To Anne Rice 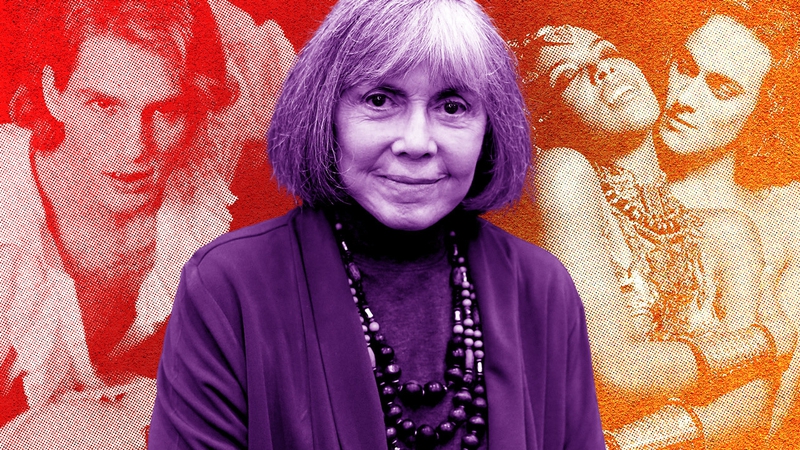 Anne Rice was Anne Rampling and A.N. Roquelaure. She was a sex goth and a Catholic fangirl, an open fujoshi and a Catholic prude, an author who was too good to be edited, and the terror of the early fanfic world. She was each of these things and more; a series of stances and declarations later softened or reversed entirely. Like any author with multiple pseudonyms and thousands of worlds within, she contained multitudes. The horror world mourns her now in the mirrored catacomb she built for us; not coming to praise Lestat but to bury her.

Most readers will remember her best for her 1976 novel, Interview with the Vampire. In a genre defined by blasphemy and grotesquerie for the century that intervened between Rice and Stoker, Rice chose to draw vampire literature closer to the sexy and enigmatic image put forth by the popular cinema, and hewing closer to Stoker's gayer (and more intriguing) predecessor, Sheridan le Fanu's 1872 gothic novella, Carmilla. The popularity of Interview exploded after the 1994 film directed by Neil Jordan introduced the world to the powerful homoeroticism of Tom Cruise and Brad Pitt as Lestat and Louis, respectively, and introduced audiences to young powerhouse, Kirsten Dunst, as the serpent's-tooth sharpness of Claudia. The child vampire character was based in part on Rice's daughter, who died young of leukemia, providing yet another metaphor for eternal youth typified by the vampire for both author and reader.

Rice was not the kind of author to be defined by her adaptations. Through prolific decades, her works continued to dominate sales charts and enthrall readers from the '70s through 2022, which will see the release of Ramses the Damned: The Reign of Osiris. Films made of her novels Queen of the Damned (2002, Michael Rymer) and Exit to Eden (1994, Garry Marshall) performed poorly and disappointed Rice herself, but did not deter her from continuing with her visions of vampires, witches, and saints.

Those saintly visions came to prevalence in the early 2000s, when following a brief coma caused by Type 1 diabetes, Rice recommitted herself to Roman Catholicism. Her 2005 novel, Christ the Lord: Out of Egypt, and its 2008 sequel Road to Cana, represented an unusual turn for her longtime fans, detailing the early life of Christ as both a human man and an avatar of the divine. Rice's journey through her faith conflicted with her social views, which were broadly liberal, particularly in the causes of queer liberation and same-sex marriage, and she distanced herself from all organized religion in a public statement in 2010. A third book she had planned on the life of Christ was never written.

Despite this interest in embroidering on the literary works of others, Rice was known to despise fanfiction writers in the early days of the internet, going as far as sending cease and desist letters and demanding that Fanfiction.net remove content related to her works from their website. Rice's fearsome and litigious reputation among fanfic writers came up in discussion once again when her death was announced. However, Rice had softened significantly on this much-discussed overreach, admitting in 2012 that she had expected the existence of fan fiction in her oeuvre to interfere with her ability to keep writing. But after enough time with the concept, Rice allowed that even fanfiction has its place: "It's been very easy to avoid reading any, so live and let live. If I were a young writer, I'd want to own my own ideas. But maybe fan fiction is a transitional phase: whatever gets you there, gets you there."

This uneasy relationship with her army of fans did not begin and end with the strangeness of fanfiction. In the recent years' ongoing negotiation with the power of well-known writers and the parasocial expectations of readers, Rice fought openly with reviewers and artisans who made craft of her printed pages. She defended, time and again, the complicated nature of slavery and the rightness of love relationships evolving under conditions of ownership. She waded into squabbles about internet justice and cancel culture on behalf of other authors, falling into the common trap of referring to all resistance to or action against a new book as some form of censorship, intending to defend artistic license and never really coming around to accepting that the conversation between authors and readers had become a much busier two-way street than it was when her career began.

We also remember those missteps and mistakes that complicate the author's person who is not dead and cannot be divorced from her still-speaking works with any sort of ethical honesty. But as we have watched the white women authors of Anne Rice's generation fall apart into appalling racism, cringe-worthy conservatism, and outright TERFery, Rice's failures cannot help but seem gentle by comparison.

The great gift Anne Rice gave to horror, gave to literature, gave to the world, was vulnerability. In her vampire novels, in her witchcraft novels as Rampling, in her baroque and ineffable erotica as Roquelaure, she made it possible to see humanity and develop sympathy for characters often cast as simply cruel and irredeemably evil. She gave us vampires as victims, children as vampires, witches as heroes, and sadists as loving guardians. Rice wrote queer characters in full and lifelike dimension, mostly sidestepping the tropes of buried and unfulfilled queer lives to point out the faceted, dimensional loveliness of being different. She succeeded in the unforgiving business of writing, the soul-shaking process of adaptation, and the misogynist world of horror in a time when women authors still had to fight to be taken seriously. She compartmentalized her work as she messily built and rebuilt her own identity (often in the form of long, pontificating Facebook posts) and famously rejected the work of her editors in the later stages of her career. Anne Rice was a woman who would be known in her own words.

Those words are her legacy. The mess of the author's life, questions of identity and loyalty, of politics and poor choices, may now be laid to rest. Rice lives now in the literary present, where she is as immortal as Armand and as unlikely to return as Christ. She leaves behind her children, her thirty-eight published novels, and her deathless hordes of bloodthirsty fans.