A recurring missive from our resident soundtrack expert. 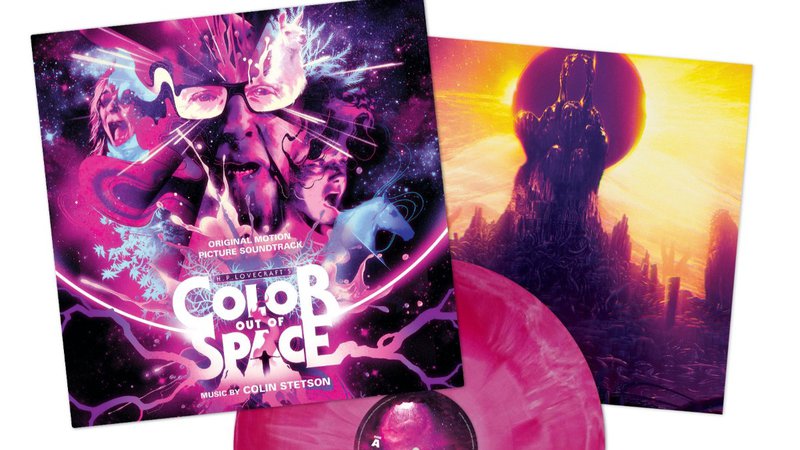 As a longtime collector of scores and soundtracks, the idea of this column has been gestating for a while: dig through the increasing onslaught of new digital, CD and vinyl releases, look at – and listen to – what’s new and what’s different, and offer some recommendations for discerning horror fans about titles of particular interest. I’m sure I’m not the only person in this community intrigued by an unearthed score or re-released soundtrack only to discover it didn’t live up to my expectations or otherwise wasn’t to my tastes. But particularly at a moment when individuals are isolated and need more different kinds of stimulation, I’ve conceived Let’s Score Todd To Death as a respite and badly-needed alternative to material on computer or television screens where daily news, much less a deluge of movies or series options, provides an escape that often becomes numbing.

Conversely, these selections help introduce diehard horror fans and aspiring collectors to pieces of movie music they might not even know they will love, and acquaint themselves with composers and distributors relegated to the margins of a bustling, ever-expanding landscape. And while you are quarantined with a loved one, friend or roommate, hearing some of these scores may prompt new viewing experiences to determine what possible imagery might have inspired them. Hopefully my selections will inspire some new purchases, or introduce you to labels soon to become your favorites! 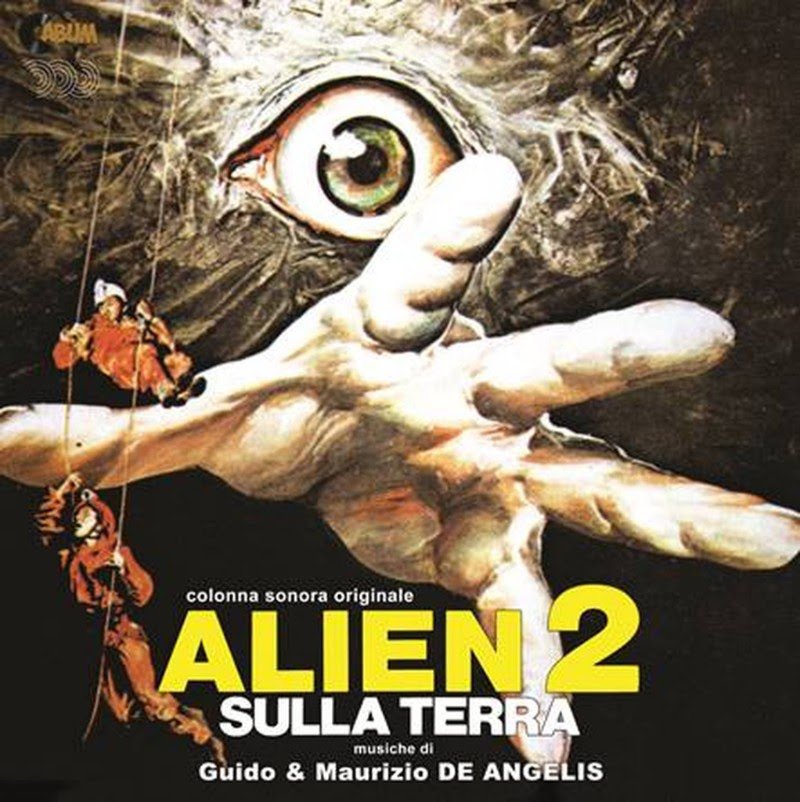 The Italian label Beat Records has been releasing film music for almost 50 years, honoring the work of icons like Riz Ortolani (Don’t Torture A Duckling), Fabio Frizzi (Zombi 2) and Nico Fidenco (Zombie Holocaust). One of their latest releases is a personal holy grail for yours truly, the soundtrack to Ciro Ippolito’s 1980 film Alien 2 Sulla Terra, an infamous Italian copycat cash-grab inspired by Ridley Scott’s Alien. Unsurprisingly, the movie’s connections to its would-be predecessor are dubious at best; but composers Guido and Maurizio De Angelis, working under the pseudonym Oliver Onions, create a vivid score that piggybacks delicately on Jerry Goldsmith's score for Alien while striking out in some bold, original directions.

Where Goldsmith’s music embraces the emptiness of space, exuding symphonic elegance, the De Angelis’ build their central theme on harmonica and acoustic guitar, backed by swirling synthesizers: the guitar twangs with the lightness of a summer day over a low, constant growl of menacing keyboards, punctuated by a repeated, discordant series of electronic chimes hinting as terrors lurking in the shadows. Like so many Italian scores of the era, the tracks are distinguished by sequences rather than dedicated titles, but even if these motifs repeat themselves, Guido and Maurizio slowly develop and deepen them throughout the album’s 21 cues (on vinyl; the CD version features four bonus tracks). They use electronic percussion to amplify a sense of atmosphere, and occasionally break into an unhurried climax or cacophonic breakdown performed with drums, guitar and keyboards that echoes Goldsmith’s escalating melodies without copying them.

It’s always fascinating to hear how musicians used synthesizers in the 1970s and ‘80s, and the De Angelis brothers are no exception; they create some utterly fascinating textures bending sounds to create a sense of disorientation, and then integrating human voices, slowed down or manipulated, to really drive the mood home. “Seq. 10,” for example, leap-frogs between a series of different motifs utilizing all of these elements beautifully. “Seq. 13” picks up where “10” leaves off, forming a propulsive rhythm with keyboards and drums that becomes increasingly eerie after introducing wailing electric guitar and slurry tape-manipulation effects. Though the film is (deservedly) less memorable than, well, one of the greatest sci-fi/ horror movies of all time, Alien 2 Sulla Terra soundtrack is a really wonderful, unique piece of film music – worthy of acquiring whether or not you can associate it with the images for which it was created. 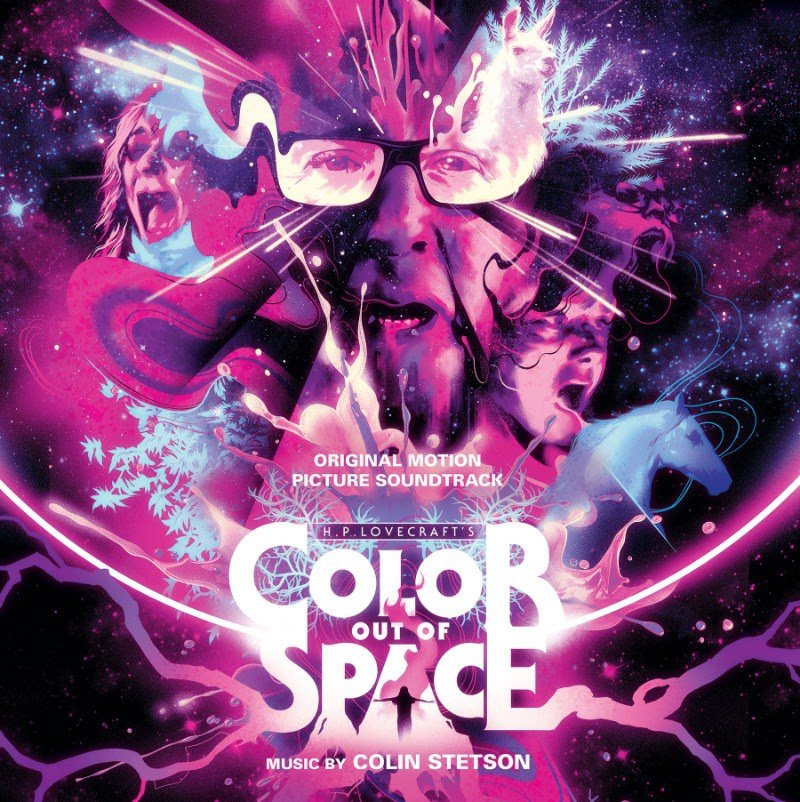 As a seeming apocalypse bears down on all of us, Color Out of Space feels like a sort of ideal film for our current moment, and Colin Stetson’s score, released onto vinyl by Waxwork Records, will certainly deliver those vibes to your turntable. Prolific but not yet well-known, Stetson previously did the score for Ari Aster’s Hereditary, and here he skillfully combines the home-studio creativity of so many other contemporary composers with the ensemble ambience of a room full of musicians, working elegantly in concert with one another.

The title of the film is more literal than one might expect, but the premise allows for some really great opportunities musically as the characters make new discoveries in the visual spectrum. “West of Arkham,” the opening cue, booms ominously, heralding unexpected and terrifying experiences for the filmmaker’s characters. “The Gardners,” meanwhile, begins with piano and strings and woodwinds infiltrate a beautiful, atmospheric mix. Delightfully, the music evokes the feeling of leading someone – the characters, and the audience – towards an uncertain fate. The film is itself a piece of classical filmmaking that flirts and explores with the dark and dangerous edges of its set-up, which makes tracks like “Contact” so powerful, with or without imagery: overbearing keyboards, burbling sound effects and reverberating instruments hint at something trying to break through the surface – of water, of the perceptible spectrum of color, of reality itself. Environmental noises complement the film’s mostly arboreal setting – are those voices, animal sounds, or something else entirely? The album gives listeners much to examine.

In comparison to Alien 2 Sulla Terra (and other film music of that time), what’s especially fascinating about Color Out of Space and Stetson’s work is the clarity and acoustics of the latter score. Because it’s been recorded in an era where multi-track stereo is an option, and the general quality of recording (and mixing) is so much more sophisticated, you can strap on headphones or put a score like Color and really feel it envelop you as a listener. The insect and animal sounds that loop behind Stetson’s sonic collage feel present, even organic, and then they recede as the composer’s guitars saw away as transformations and evolutions occur on screen. Colin Stetson’s music offers a perfect complement for the film, but as a separate listening experience Color Out of Space feels capable of inspiring some profound, unexpected moods. 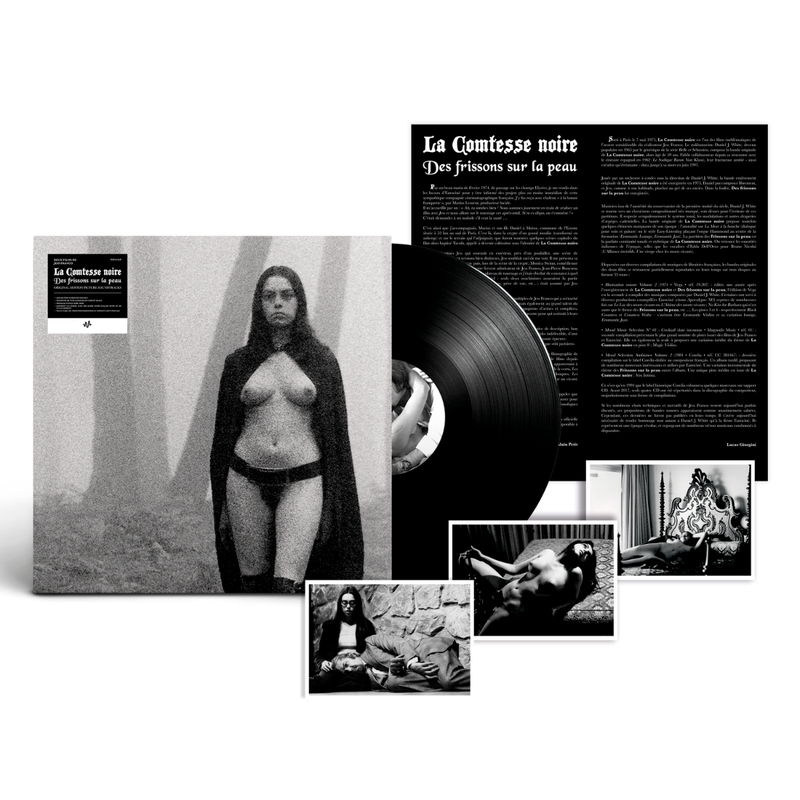 Omega Productions is a fledgling French label specializing in soundtracks from different sorts of French genre films – some vintage, others more contemporary. If you’re like me, Jess Franco has long been a favorite filmmaker, particularly in terms of soundtracks, thanks first to the German label Crippled Dick Hot Wax (possibly the greatest label name of all time) and its release of the Vampyros Lesbos soundtrack back in 1995, which led to a massive rediscovery of both his films and their soundtracks. After a release of the soundtrack to Martyrs in 2019 (along with a broad spectrum of other French films), Omega recently collected work from composer Daniel J. White from two Franco films, La Comtesse Noire and Des Frissons Sur La Peau (both 1973).

Where the Vampyros Lesbos album (actually a repackaging of Manfred Hubler and Siegfried Schwab’s The Vampires' Sound Incorporation – Psychedelic Dance Party) offered an exotica-tinged celebration of depravity, White’s music for these two films is positively restrained by comparison, offering a decidedly more romantic, even jazzy atmosphere. The La Comtesse Noire theme aches with strings and piano not unlike Ennio Morricone’s work from that time – or even Nino Rota’s themes for The Godfather. Pieces like “La Mort a la bouche” and “Vox intima” definitely flirt with Martin Denny-style exotica, but crossed heavily with the seeming influence of Morricone’ longtime muse Edda del Orso to give it greater weight, and even tragedy, especially when paired with gently strummed acoustic guitar. Conversely, “Eromantic Jazz” bounces peppily along, evoking the cheerful grooves of Peanuts composer Vince Guaraldi.

The perfectly titled “Eromantic Lounge” coasts along on a slinky groove probably best listened to on a bearskin rug in front of a roaring fireplace, martini in hand. And “Piano romantique” wraps the Comtesse tracks with emphatic solo piano, revisiting White’s central theme one more time to powerful effect. The cues for Des Frisson Sur La Peau pick up on side two, where White merges beautiful female vocals and rapturous piano playing in the style of Francis Lai’s Emmanuelle score, but slightly darker. But the fifth track on the B-side, “Viree nocturne,” remolds the main theme into a funk instrumental, with slinky bass driving drums, keyboard, guitar and trumpet. It’s a standout especially for folks acclimated to Franco’s raunchy kitsch, especially with another piano instrumental afterward delivering a sober finale. Ending with “Ca tourne!,” a session recording featuring that wonderful female vocalist as White arranges all of the pieces of his score, this LP features absolutely beautiful packaging that amplifies the sexy, mysterious vibe of the music. 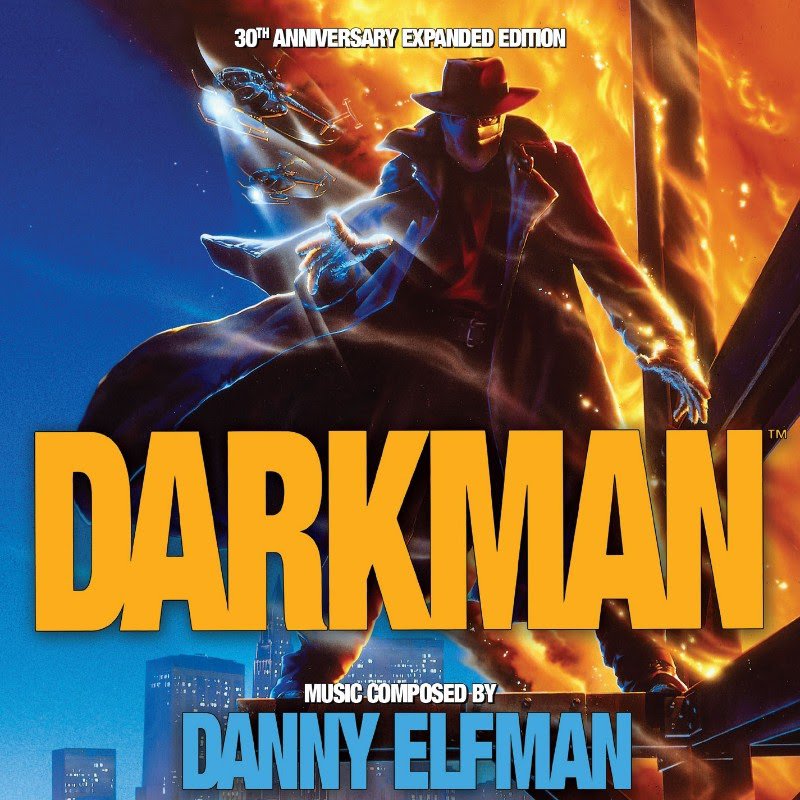 Finally, there’s La-La Land, one of the premiere distributors of soundtracks from all different genres – mostly on CD, but always featuring the highest-quality mastering (or remastering) and great packaging. Danny Elfman’s Darkman score has been a personal favorite since I was a teenager – it was one of the very first CDs I ever bought – and I can remember every gothic note from start to finish, complete with the scene and in some cases even the shot it accompanies. La-La’s new two-disc, 30th Anniversary Limited Edition completely remasters the original album release, and then adds 32 more tracks, some extended editions of existing cues and some completely original or unused pieces. It’s an embarrassment of riches both for Darkman and Elfman fans who never heard a lot of this material before.

La-La Land’s sense of archiving and completeness is unrivaled; as good as Waxwork’s vinyl version was in 2017, this really compiles and sequences the tracks as accurately as possible to mimic the flow and sound of the movie itself. Disc Two doesn’t feature the Main Titles until track three, but then dives into tracks that Elfman either had to edit, combine or excise completely. “Peppy Science,” “Woe the Darkman… Woe” and other cues return in the version seen in the film; others last less than a minute, such as “Persistence / Marry Me,” conjuring immediate associations with the film. But whether you know Sam Raimi’s film well or know Elfman’s score, it feels slightly like a skeleton key between the composer’s work for Tim Burton and the other filmmakers he began to collaborate with around this time - his growth, his evolution, the overlaps as he developed a signature sound.

Mike Matessino has produced several of the label’s remasters, and does another exceptional job here protecting the composition and mixing of Elfman’s work while quietly sprucing it up for 2020 ears. Darkman as a film remains this wonderful creative oddity, and even if Elfman’s score already did it justice, La-La Land’s new two disc anniversary edition celebrates an element that made it special, and capable of enduring as much as a musical masterpiece as a cinematic one.