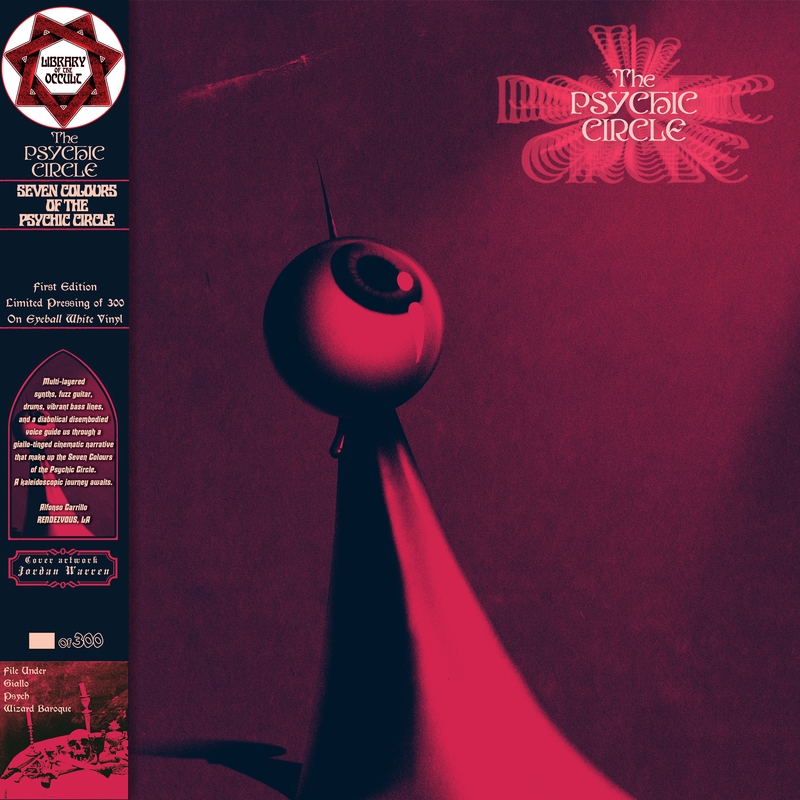 As the world continues to descend to a new level of hell, record labels continue to release some great titles — some current, some classic, and some ready for rediscovery. But before I get into this month's buffet of actual film music, I wanted to spotlight The Psychic Circle's Seven Colours of the Psychic Circle, a clearinghouse for funky, moody instrumentals that finds the halfway point between '70s horror luminaries like Ennio Morricone, Goblin and Stelvio Cipriani and contemporary ensembles such as El Michels Affair, Budos Band and BadBadNotGood. Any group that can recreate the timeless groove of Melvin Bliss' "Synthetic Substitution," as The Psychic Circle does on "The Eternal Colours," will always earn a special place in my hip-hop-loving heart; but Seven Colours' seven tracks spotlight the way that contemporary musicians are absorbing the influence of horror movies, replicating the technique or style of composers they love, and then updating it with their own creativity. It's a great record for a funky séance, or a dinner party.

Anyway, onto the bona fide film scores. Generalization alert: Prior to 1970, horror scores were not nearly as often the exciting, complex affair that they later became as composers experimented with different genre influences and equipment, musique concrète exerted its influence, and sound design became a more vital (and sometimes difficult to distinguish) component of the filmmaking process. Part of the problem was that big-budget genre fare, especially horror, largely did not exist; even after Rear Window and North By Northwest, Hitchcock didn't have the same resources for his proto-slasher movie Psycho. His scruffier, less commercially successful competitors were working with true shoestring budgets to bring their visions to life — and they seldom reserved the lion's share of them for the music. But in between the Universal renaissance of the 1930s and '40s and the post-Psycho period when distributors began to subsidize horror at a higher price point, many of the scores that accompanied these films did not distinguish themselves as classics on the level of what came before or after. 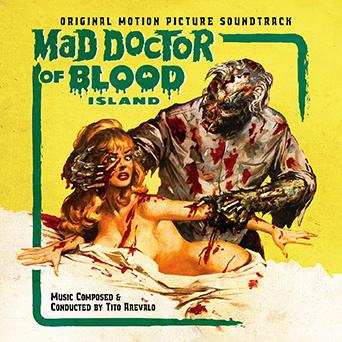 This is just part of why composers like Tito Arévalo and William Lava are not well known, if they're known at all, to soundtrack collectors. Both have an extensive list of credits, but what they were making was never meant to be great art; Arévalo was a Filipino actor who also happened to be a prolific composer, and Lava primarily worked in TV, with a few dalliances in film. Real Gone Music presses a lot of interesting and unique records onto vinyl, and they just announced releases of two scores from these musicians, Arévalo's music for Mad Doctor of Blood Island and Lava's for Dracula Vs. Frankenstein. I have a lot of admiration for anyone who counts these among their must-have holy grails, because I don't even know the films, much less their soundtracks, but the releases offer a thorough and high-quality collection of cues in packaging that provides some context about their respective legacies even if (like me) you're not already familiar with them.

Mad Doctor was an exploitation film starring Christopher Lee, originally released in 1969. Arévalo's score sounds almost exactly like you would expect from most of the scoring of that time: melodramatic and ubiquitous, nudging the viewer along with an almost overwhelming sense of dread or suspense. Ed Wood, and Howard Shore's Ed Wood, comes to mind. But the composer includes a handful of "Dance" tracks, including an alternate take, that bridge the gap between that theatricality and Martin Denny-style exotica, with lots of xylophone, cacophonous percussion and choral chanting. Additionally, the record closes with a vintage advertising spot for the film and an "Oath of Green Blood Intro," which advised audiences to drink a green 'blood' potion distributed before the movie as a gimmick. The release notes that this score was so good that distributor Hemisphere Pictures actually used it two more times, including for the 1971 Al Adamson film Brain of Blood; but as a time capsule of vintage horror sounds of a bit of spooky fun, Mad Doctor of Blood Island is definitely worth checking out. 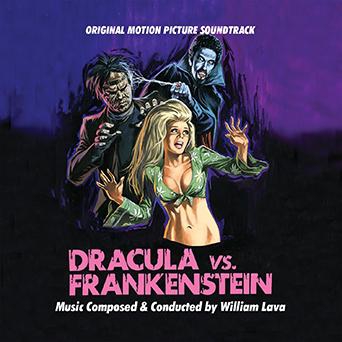 The same is true for Lava's urgent, theremin-laced score for Dracula Vs. Frankenstein. He really works that anachronistic instrument like crazy over the title theme before collecting a series of oddball sounds that, without images, make the film seem like it might have been heavier on sci-fi than horror. If it's not quite kitsch, the music also isn't necessarily a profound moment in film music history; but Lava seems unfettered by any restraint or even guidance as he throws everything and the kitchen sink into this menacing collection of cues. Like the Mad Doctor record, this one also features a radio spot for the film, a delightful little coda to a record that will leave your nerves frazzled; if it's not quite an automatic purchase, this is the kind of record you add to your collection and end up loving years later because you needed a soundtrack for, say, your kid's haunted house, and realized it was actually pretty great on its own. 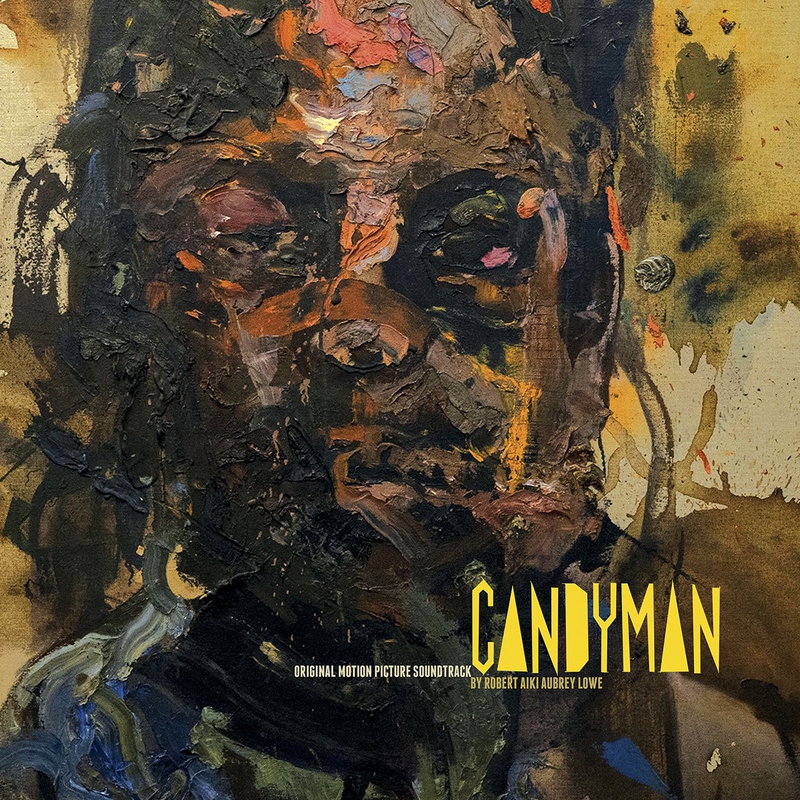 Nia DaCosta's Candyman revives Clive Barker's monstrous creation in a familiar but completely different context, offering new dimensionality to the original film while striking out in bold, new, and pointedly culturally relevant directions. Robert A. A. Lowe's score to DaCosta's film pays homage to the composer of Bernard Rose's, the legendary Philip Glass, while similarly striking out into new territory. Although he offers a slightly updated but otherwise identical rendition of Glass's "Music Box," for example, Lowe, whose background includes work in doom/ stoner rock, uses many menacing atonal sounds to evoke the evil of the legendary killer. But then on cues like "The Sweet," he also uses a similar sort of repetition and minimalism that evokes the structures that made Glass so singularly identifiable, while deepening the intensity of the story that DaCosta tells with her film. Available digitally and on a new LP set from Waxwork Records, Candyman is a record best listened to with friends, and certainly nowhere near a mirror. 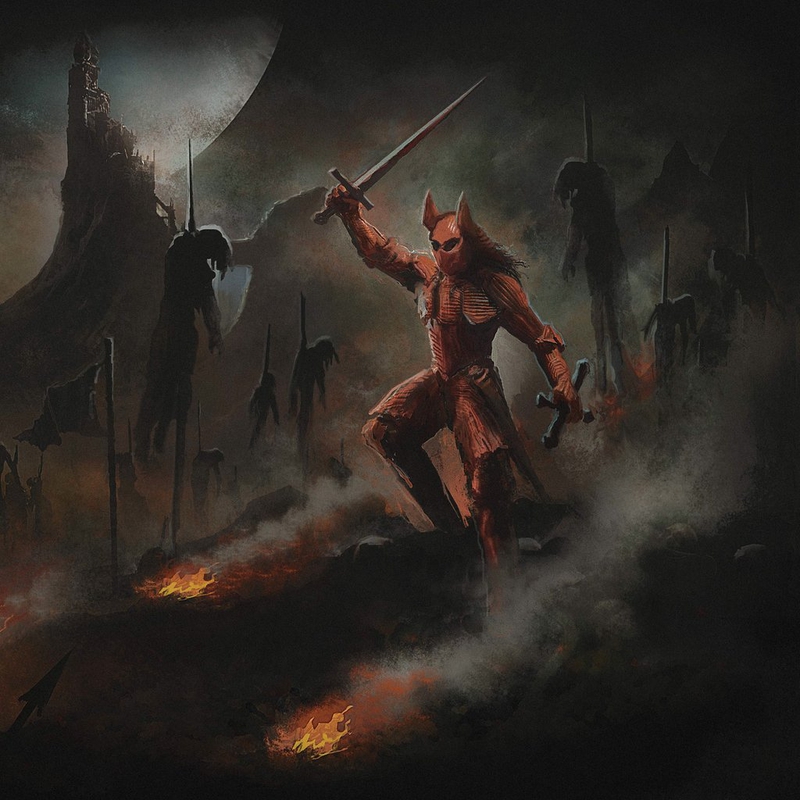 Finally, Mondo released what is truly a holy grail of a score recently, and one that has to some extent been absorbed into moviegoers' collective bloodstreams via the dozens of movie trailers that used its cues to promote the films of the early to mid-1990s. Wojciech Kilar's score to Francis Ford Coppola's Bram Stoker's Dracula is for my money one of the greatest horror film scores of all time, not simply because of its ubiquitousness during that time, but because of the extraordinary way that it weaves danger and romance together in such a palpable way, a combination that lots of horror films stress but few accomplish as beautifully.

"The Beginning" is wonderfully rhapsodic, detailing Vlad's tragic history and the malevolent pact he strikes after the death of his beloved, before "Vampire Hunters" treads through the same territory as, say, Danny Elfman's Batman scores, except with a different kind of creeping intensity. It's this second cue that was used so often on so many trailers, whether or not it was particularly suited to the films (and indeed, few of them were horror at all, much less gothic horror romance). But Kilar's music here also overlaps with a different Gary Oldman film from that era, The Professional, although he uses that love violin to a much more emphatically romantic effect than Eric Serra did (or perhaps intended to) in Luc Besson's film. Still, this score's swinging, operatic moods make it extremely fun to listen to because of the little lulls and leitmotifs that showcase how the film aligns itself with Dracula, but also knows that he must be its villain. An extraordinary score released in predictably extraordinary packaging, Bram Stoker's Dracula is an all-timer, and hopefully its revival will inspire collectors, filmmakers and lovers to embrace the multitudes within them — well, without requiring quite so much blood, anyway.