Manfredini remastered, the sounds of Italian horror, and more! 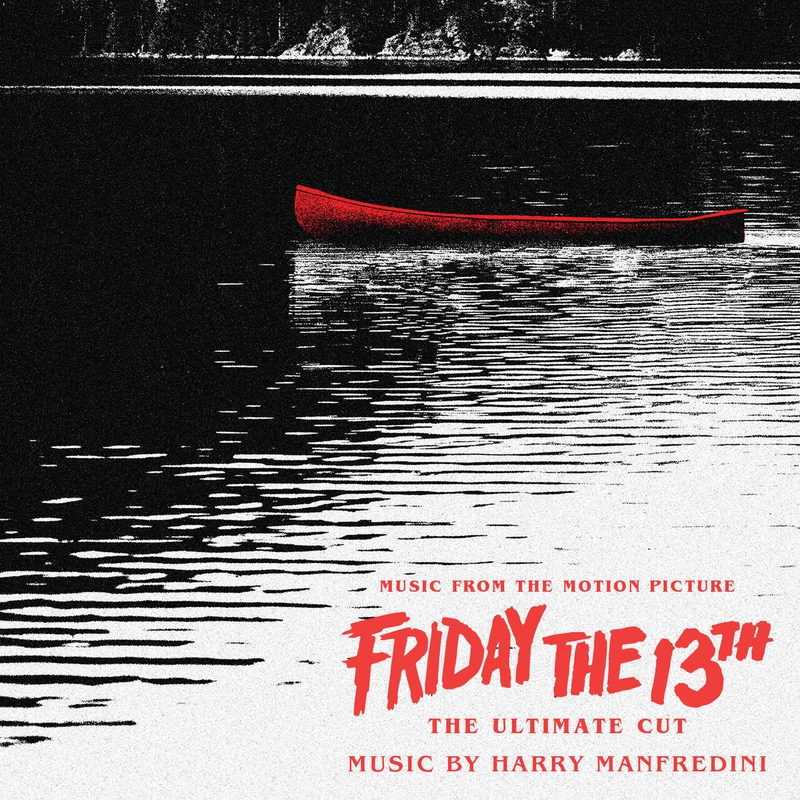 Indisputably, the big movie music news of January 2022 is Varese Sarabande’s one-two punch releases of its Scream 1-4 box set and Scream (2022), which offers a fascinating timeline not only of the film series but also eras of scores and even horror subgenres. What worked in 1996 didn’t work the same way in 2011, much less 2021, so following Marco Beltrami as he developed as a composer, pivoted to the needs and limitations of each new installment, and then handed it off to Brian Tyler gives listeners a really interesting history lesson in artistic growth, in the sound of film music, and slasher films themselves. You can actually read a more detailed breakdown of those releases in an article I wrote last week. At the same time, there’s still plenty to check out, even if this month’s column may not have quite as many titles to showcase (God damn you, supply chain issues!).

In fact, the first perhaps most exciting title I received after those two collections was Friday the 13th: The Ultimate Cut, La-La Land’s expanded and newly remastered CD edition of Harry Manfredini’s iconic score to the original Friday the 13th. It feels almost like a bookend to the Scream material — this being an absolutely classic example of peak-era slasher movie music, and Scream being the moment the subgenre got reborn by commenting upon itself. But as a release, this single-disc release is what I would call definitive, even for a franchise whose music has successfully and more than satisfactorily been reissued and celebrated in the past. Quantitatively, this increases the number of tracks available from the film from 17 or 18 to 33, which means more “ki-ki-ki”s and “ma-ma-ma”s per minute. But much more importantly, the material was all taken directly from original two-inch 16-track audio masters, and then fully remastered and remixed by Manfredini’s longtime mixer Jerrold W. Lambert, who worked with an amazing restoration team to create the clearest and most sophisticated mix in the history of these recordings.

I consider it no small compliment to say that for horror fans, this disc is sort of the equivalent of Prince’s 2014 remastering of Purple Rain — an invitation inside the music like never before. From “Overlay Of Evil” to not one but two versions of “Boat On The Water,” you can seemingly hear each of the 13 musicians (yes, I’m serious) that performed Manfredini’s music in a new, different, much deeper way. When I first started listening to the disc with my headphones, I hadn’t realized that I turned the volume all the way up, and the first “ki-ki-ki-ma-ma-ma” actually startled me because it felt so close and immediate. But even source cues like “Banjo Travelin’” and the Dolly Parton-inspired “Sail Away Tiny Sparrow” have a new vitality and energy that makes this music fun and newly interesting as a listening experience. One can only hope that this mix will someday make it onto vinyl, but until then, Friday the 13th fans should not just look at this as a double-dip; it’s an upgrade from DVD to 4K, and it’s spectacular. 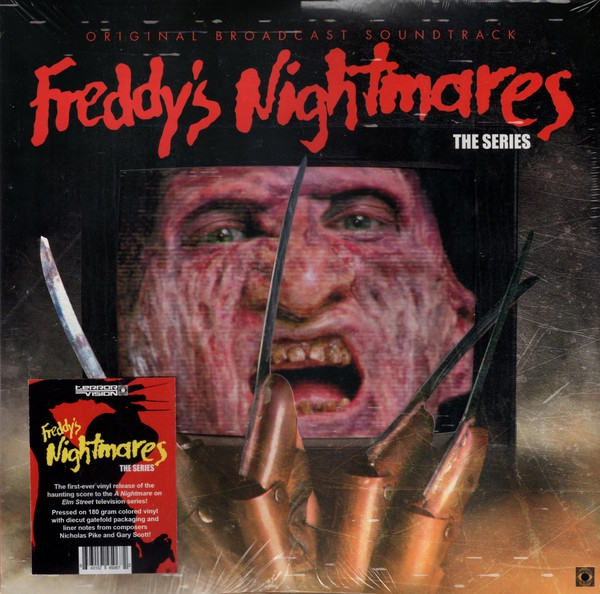 Somewhere in the middle distance between a well-established classic and an iconoclastic franchise reboot falls Freddy’s Nightmares, a television series I was almost certainly too young to watch in 1988, but secretly stayed up for anyway. For slightly more casual or nostalgic fans like me (and those who were diehards or perhaps Nightmare On Elm Street completists), the record label Terror Vision just released two amazing versions of the score to the show, one on a single slab of vinyl and another stretched across three. Thesingle-LP version runs about 42 minutes and features 28 tracks, while the other is (needless to say) much longer. But what’s interesting about the music is that even if it’s definitely synthesizer and keyboard-driven, which made it much cheaper to produce than a traditional film score, it actually pretty closely matches the sound of many of the synth-driven film scores of that era — though whether that’s a compliment to this music or an insult to late-‘80s horror film composers is up to you.

Inspired by the series’ anthology format, director Tobe Hooper, who helmed the pilot, and New Line Cinema founder and CEO Bob Shaye, composers Nicholas Pike, Gary Scott, Randy Tico and Junior Homrich pooled their efforts to create this moody, sometimes poppy, but consistently propulsive and intriguing collection of cues. Nicholas Pike’s title theme doesn’t come particularly close to Charles Bernstein’s skeletal piano motif from the first film, but it creates a great sense of atmosphere that the show went on to milk whether Freddy was involved or not (and often, he wasn’t). There are tracks that use the ubiquitous-in-the-‘80s sound of synthesized bells, others feature piercing heavy metal guitar, and still others that bump along like they deserve to go with an aerobics routine. Whether you will want the three-LP version, again, depends on how well you might have known or loved the show, but I’ll say that after listening to the single-LP version a handful of times, I’m actually eager to check out more. 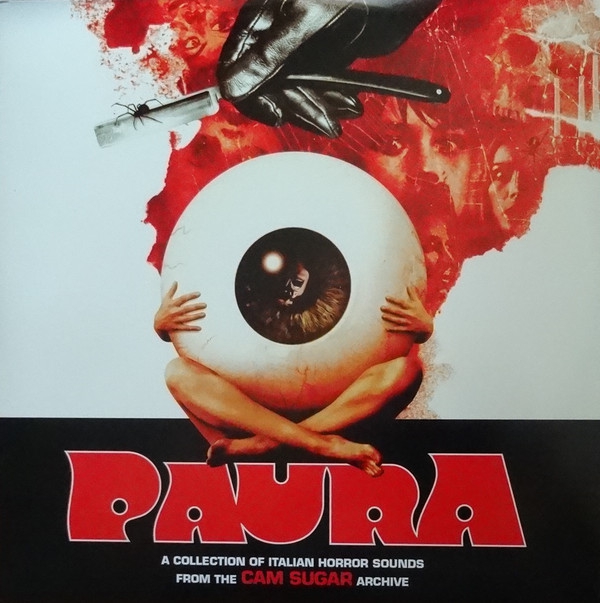 Genre compilations can be a real crapshoot these days, but as a bit of a classicist (and especially a fan of discovering stuff I haven’t heard or didn’t know existed), Cam Sugar and Decca Records put together one of the best I’ve heard in a long time with Paura. Billed as “a collection of Italian horror sounds from the Cam Sugar archive,” the double-LP set features 25 incredible cues, some unreleased, from an array of iconic and lesser-known composers made for films released between 1971 and 1985. This collection starts with no less than Ennio Morricone and ends with Daniele Patucchi, who not only did dedicated film music but library music (search for his track “La Dimostrazione,” which appeared on the compilation Unusual Sounds, and tell me if that shouldn’t be in some sort of horror-cop TV series immediately). In between, there’s music from Bruno Nicolai (The Night Evelyn Came Out Of The Grave), Franco Micalizzi (Chi Sei?), and more.

Stelvio Cipriani’s “Il Sesso Del Diavolo (Finale)” (from the 1971 film of the same name) starts with a pretty shameless “Inna-Gadda-Da-Vida” rip off, but also sort of anticipates Incredible Bongo Band’s funked-up reworking that came two years later. (It’s also a real party-starter.) A lot of the first half of the compilation is real fuzzed-out funk rock and the kind of ethereal melodicism I feel like I’ve talked about a lot in the past, where composers made music that was so sweet and beautiful it disarmed audiences and distracted from the fact they were watching grisly, sometimes deeply disturbing acts of violence. The competing instrumentation in Patrucchi’s “Giallo In Tensione” (from 1972’s Frankenstein ’80) is so fascinating to listen to because it sounds like virtually nothing composed today, especially as it vacillates between funk workouts and an almost John Barry/ James Bondian orchestral sweep.

Between all of these different modes, and especially arranged as they have been here, the compilation is just plain fun to listen to in a way that, notwithstanding the two mentioned above, a full feature score may not always be. There’s real musical variety, with something to catch your attention or keep you connected to it all of the way through, where others may fade into the background. Nico Fidenco’s “Il Demonio In Convento” (from 1979’s Immagni Di Un Convento) uses creeping percussion, a primary-melody keyboard, and some other kind of synthesizer that’s vamping out underneath it, just kind of keeps you riveted. Ettore De Carolis’ “Flavour Of Death” (from 1983’s Il Cavaliere, La Morte E Il Diavolo) exudes a haunting, psychedelic romanticism that evokes François de Roubaix’s music for Daughters of Darkness. And it wraps with “Minaccia Sulla Citta” (from 1984’s Wild Beasts), a previously unreleased track from Patucchi that he presumably recorded right after watching Escape From New York, since it sounds so much like a pastiche of about four or five of Carpenter’s themes from that film.

While Friday the 13th: The Ultimate Cut is already shortlisted for me as one of 2022’s best reissues, Paura is probably one of my favorite releases from 2021, because it offers one exciting discovery after another while delivering an experience that feels wonderfully appropriate at the beginning of a new year. But whether you’re looking for rediscovery, reappraisal, or pure revelation, there’s already plenty of great horror movie music to explore in the new year.