A new graphic novel enlists an all-star group of creators to celebrate the fiftieth anniversary of THE NIGHT STALKER. 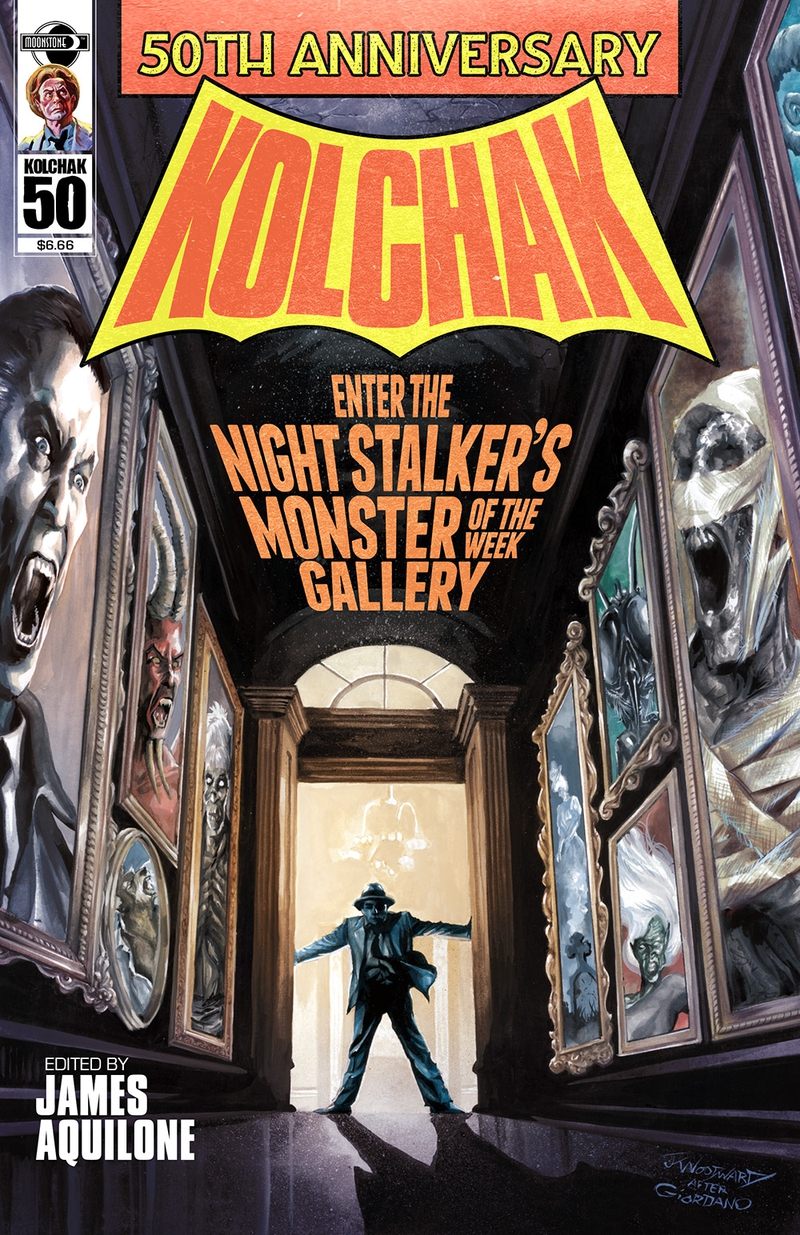 Agents Dana Scully and Fox Mulder. Buffy Summers. The Winchester Brothers. Besides making a living killing the creatures of the night, these beloved television characters have something in common creeping around their family tree - and he wears a white seersucker suit and a pork-pie straw hat. The X-Files, Buffy the Vampire Slayer, Supernatural, and more all walked the path cut by Kolchak.

This January marks the fiftieth anniversary of The Night Stalker, the ABC Movie of the Week that introduced the world to Carl Kolchak, an investigative reporter who had a bad habit of stumbling into supernatural happenstance. Based on an unpublished novel by Jeff Rice, The Night Stalker starred A Christmas Story's Darren McGavin as Kolchak, a Las Vegas crime reporter on the trail of a killer whose victims were drained of their blood. You can probably guess what Kolchak found at the end of that rainbow. McGavin would return to play the character across one more made-for-television film (The Night Strangler) and twenty episodes of Kolchak: The Night Stalker, a follow-up television show. As he came across werewolves, mummies, demons, and ghosts, Kolchak would match each new monster with his trademark humor and dumb luck. Never able to actually prove the existence of the monsters he was helping to stop, Kolchak's career was often the real casualty - with the character frequently run out of town by the authorities or demoted by his newspaper editor.

With only two films and a single television season, you might expect that Carl Kolchak would only be a footnote in the history of horror - Archie's Weird Mysteries ran longer. Thanks to years of reruns on late-night television and a dedicated fanbase, The Night Stalker would see its legacy cast a long shadow as the show went on to inspire a new generation of creators. Chris Carter, in particular, was extremely outspoken regarding The Night Stalker's influence on The X-Files - going as far as to cast McGavin in a fifth season episode of his show after years trying to convince the former Kolchak to play Agent Mulder's father.

Kolchak may not have enjoyed as long a run on television as some of the shows the character inspired, but he's still looking pretty good at fifty, as made evident by a highly successful Kickstarter campaign currently running. The campaign, which surpassed its goal and then some - will launch a comic book anthology graphic novel celebrating Kolchak's fictional monster squashing career.

At the center of the campaign is editor James Aquilone. Working with Moonstone Books, a Chicago-based publisher that has been keeping the Night Stalker legacy alive for the last few decades through a series of comics and prose novels, Aquilone has assembled a who's who list of creators and artists to tell stories set across multiple decades in Carl Kolchak's life. 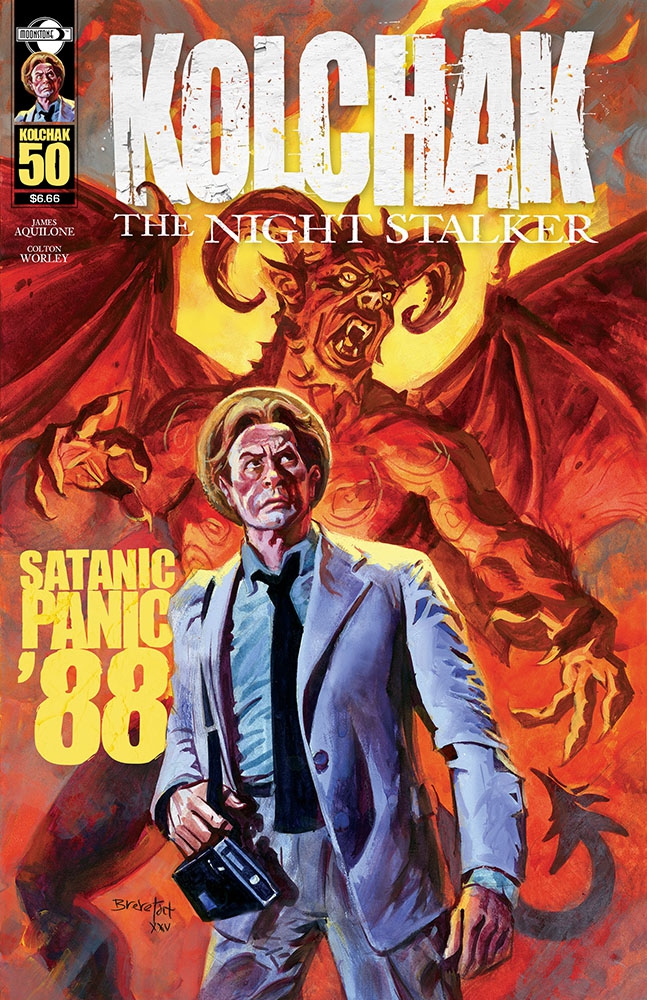 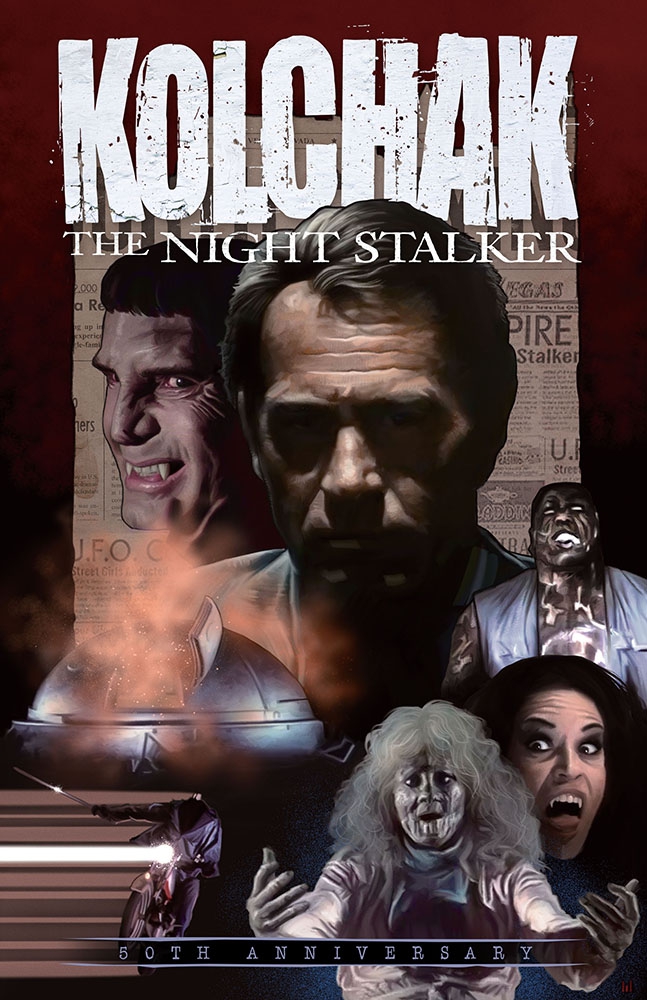 Aquilone, who grew up in the '80s, first discovered Kolchak thanks to reruns and his love for A Christmas Story. "I was a big fan of the series' blend of horror and humor," he said. "I have a series about a zombie detective named Dead Jack that was inspired by the show."

Having just completed a successful Kickstarter campaign for the prose anthology CLASSIC MONSTERS UNLEASHED, which saw authors pay tribute to Universal Studios' classic horror film slate of the '30s and '40s, Aquilone went looking for a new project to tackle and remembered his love for The Night Stalker. "This is the first time I'm doing a major comic book project," Aquilone said with a laugh. "Everything I've been doing is a ploy to get into comic books."

Aquilone reached out to Moonstone Publishing, who has regularly released a series of books and comics using the character set in a new contemporary continuity, about a new project using the character. Unlike Moonstone's books, though, Aquilone felt it was necessary to have his comic book project use a period setting. "It's not a reboot," he said. "We're not going to screw up Kolchak. We're going to have all the tropes you would expect - in a continuation that's in line with the TV show and movies."

Aquilone thought exploring the character's entire life would be a great idea.

"Kolchak is the same age as Darren Mcgavin - both were born in 1922 - so we stuck with that timeline exploring his earliest case up until his final days in the early 2000s, around the time McGavin died."

Aquilone started working on the project last June - knowing that the character's fiftieth anniversary was coming up in January. The editor quickly assembled a dream team of writers - all creators inspired by the show - and assigned out time periods, a process that came naturally. "Nobody fought over the time periods," he said. "Everything fell easily into place."

With writers picking time periods they were excited to explore, the opportunity opened up for some fun meta opportunities - including famed horror author Nancy Collins writing a story set in the '90s that is inspired by The X-Files.

The end result is a 100-plus page anthology. But wait, there's more. In addition to the standard softcover book, fans can choose to buy a deluxe hardcover edition of the book that will include an additional ten prose stories. In addition, there are extra incentives, including statues, t-shirts, posters, and more. Aquilone is hoping to have the book in readers' hands by Halloween. "We already have half the scripts in and some of the artwork," he said.

While there is the chance additional copies might be available to purchase after printing, the only way readers can guarantee to get a copy of the book is by backing the campaign on Kickstarter.

With multiple versions of the book being printed and plenty of add-ons for fans to choose from, getting the book printed and shipped out is going to be a lot of work. "It gets a little overwhelming," Aquilone said. "It's going to be really busy this year. But as long as I don't lose money, I'm fine."

For Aquilone, this project is 100 percent born out of a passion for the character.

"I was too young to work on the show and now, by writing a Kolchak story, this is the closest thing to doing an episode," he said. "It's kind of insane."

BACK THE PROJECT HERE and scroll to take a peek inside. 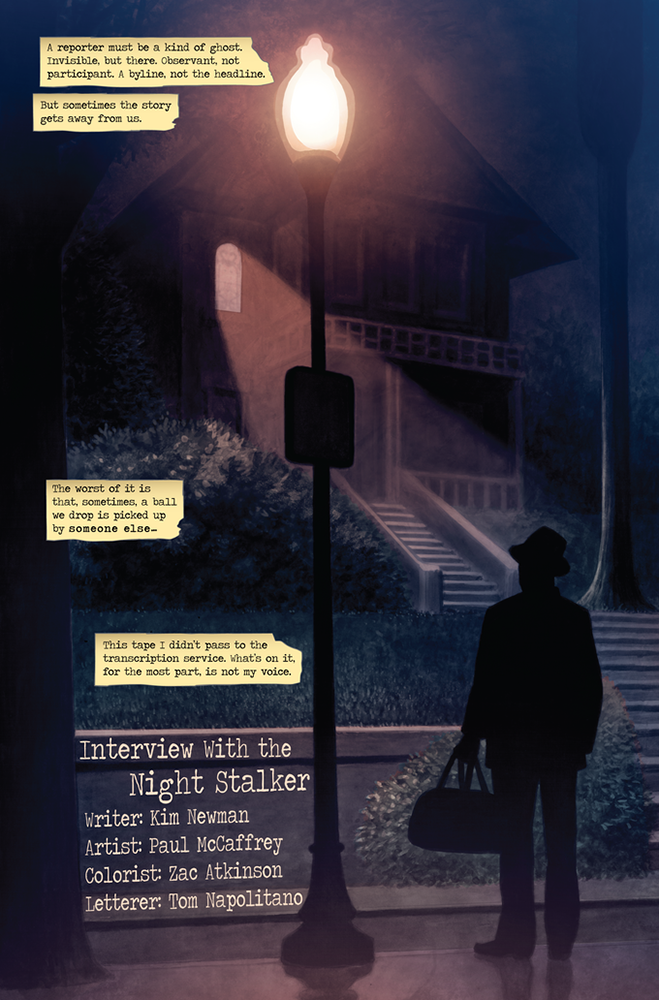 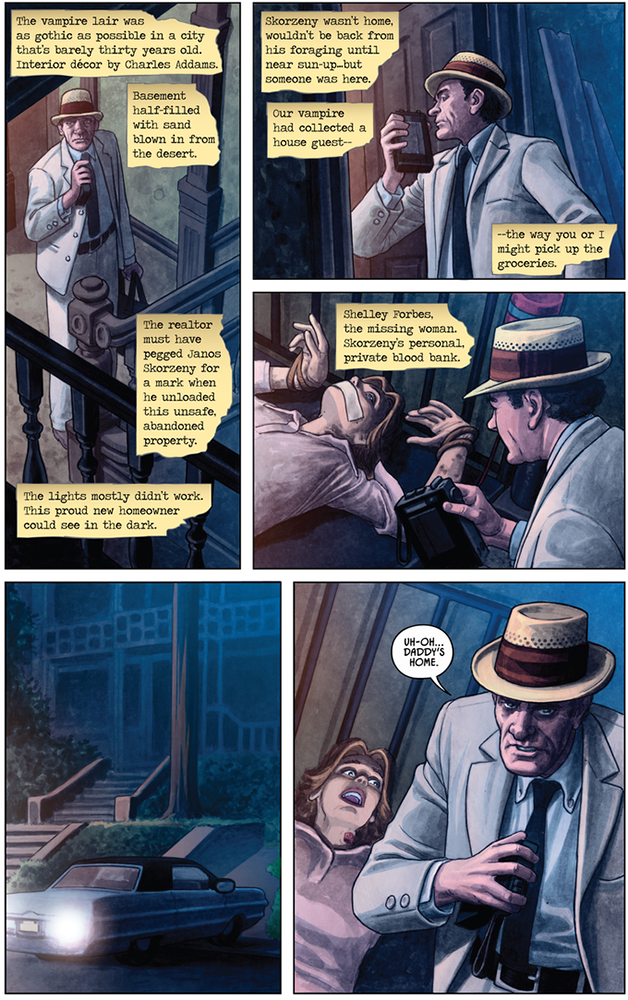 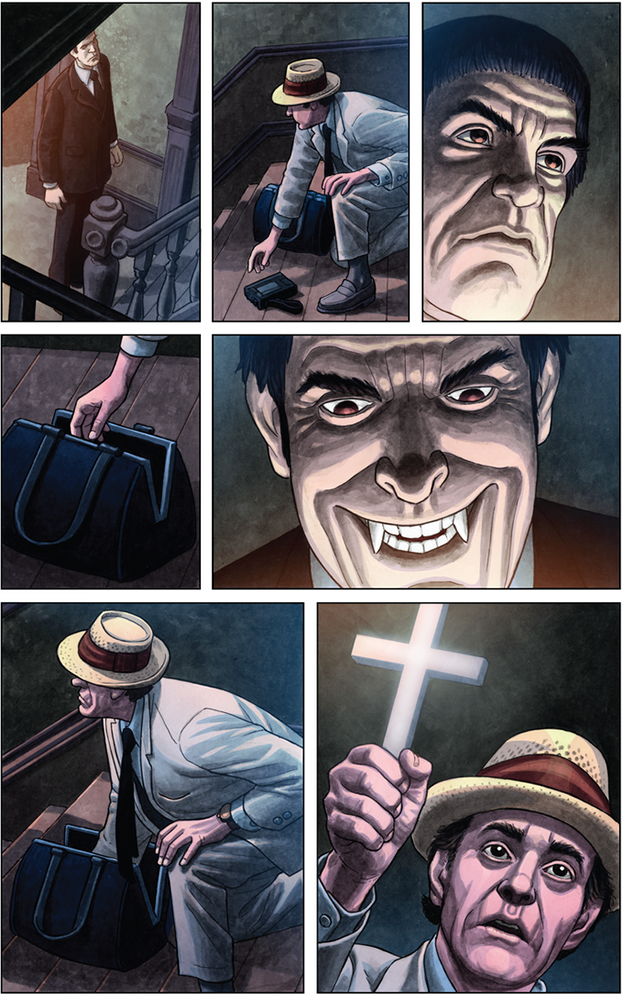 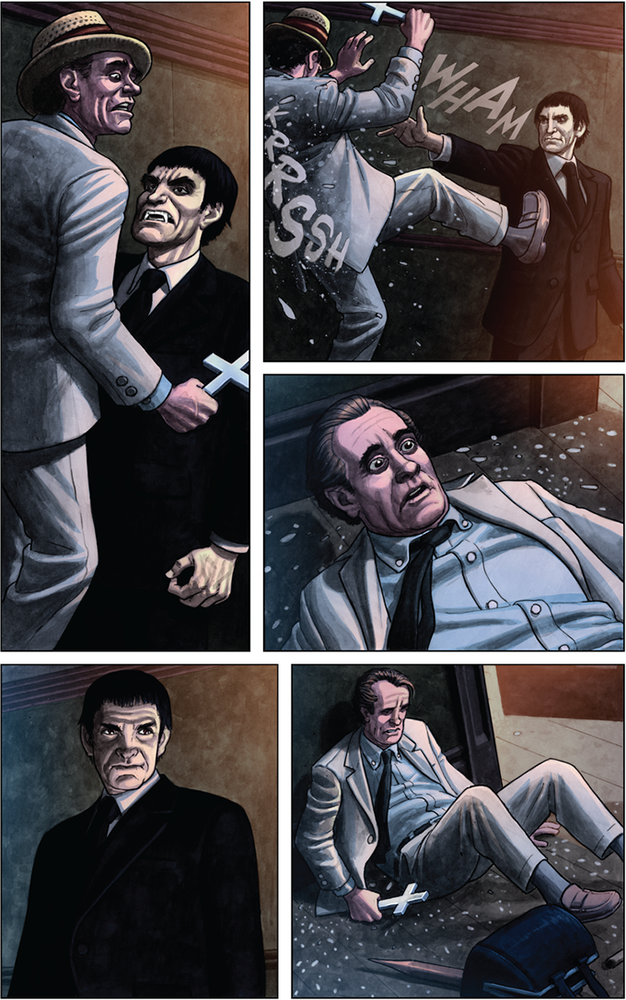 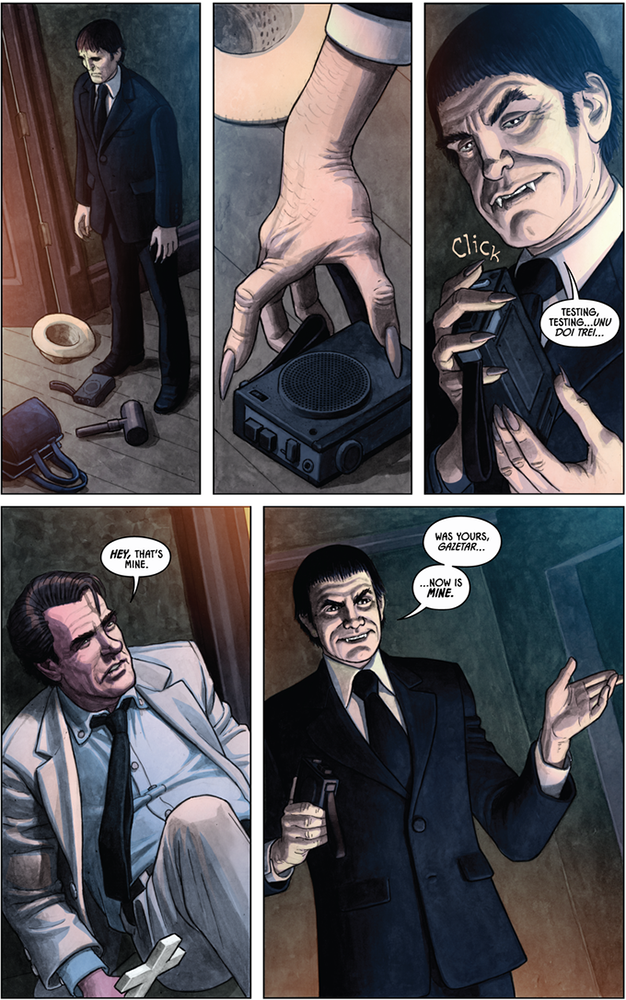