Just How Real Is THE MUMMY's Curse? 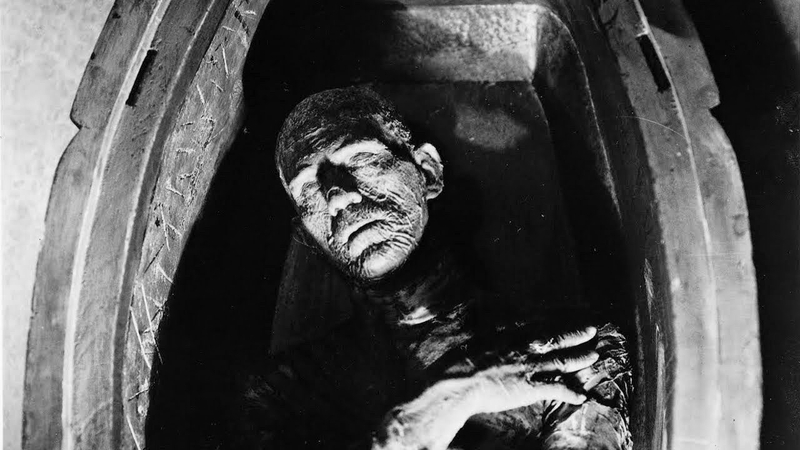 It did not truly dawn on me that mummies are actually cursed until I was inside a tomb in Cairo. I had always assumed the lore around the curse was some Orientalist xenophobia that I perpetuated against my better judgment with my infatuation of The Mummy movies. One of my fellow Arab Americans on the tour had joked earlier as we climbed inside the great pyramids, hunched and breathless, "So which ones are cursed?"

Later, at the Valley of the Kings, Alaa, our guide, shrugged and sidestepped, saying, "Tutankhamun's tomb is being restored. I recommend going to the others. They are more colorful."

The wheels in my mind cranked. Of course, I knew from Hollywood's iterations that mummies were associated with curses. The opening of Karl Freund's 1932 The Mummy starts with the spell that Isis used to resurrect Osiris, but that's not really a curse.

In fact, in The Mummy films of both 1932 and 1999, Imhotep (played by Boris Karloff and Arnold Vosloo, respectively) used that same spell to try to resurrect his beloved Anck-su-Namun. They call the spell by different names, The Scroll of Thoth and The Book of the Dead, but it's the same spell. It's the spell on which much of the Ancient Egyptian faiths rely.

Here is that origin story at breakneck speed: in the mythology of the gods, Set grew jealous that his eldest brother Osiris was elected to rule over and civilize humanity. Set killed Osiris by tricking him into his own coffin and throwing him into the Nile. Isis, their sister and Osiris' wife, recovered his body, and she hid it from Set. Set found the corpse, and he dismembered Osiris' body into 14 pieces. Isis then scavenged to find all Osiris' parts. The only missing part was his penis, and she created a replacement. When his body was whole, Isis worked the spell of resurrection. Then, Osiris became ruler of the deceased, where he aided human souls to the afterlife. Needless to say, when it's the foundation of the entire religion, the resurrection spell that Isis performed to resurrect her brother-husband is pretty important, even holy. According to Dr. Bob Brier, "Almost every funerary belief that the Egyptians had can be traced from this story." And we all know how important funerary beliefs were to the Ancient Egyptians.

But how does that relate to the curse? In both iterations of the film, when Imhotep tries to raise Anck-Su-Namun from the dead, the ceremony gets interrupted. Then, Imhotep is condemned to be buried alive, and Imhotep himself — his mummy, is cursed.

Let me reiterate: in the Hollywood representations, the mummy himself is cursed. He's cursed because he tried to use a holy spell for secular purposes… I think. He does it for love. But he's punished for treason. 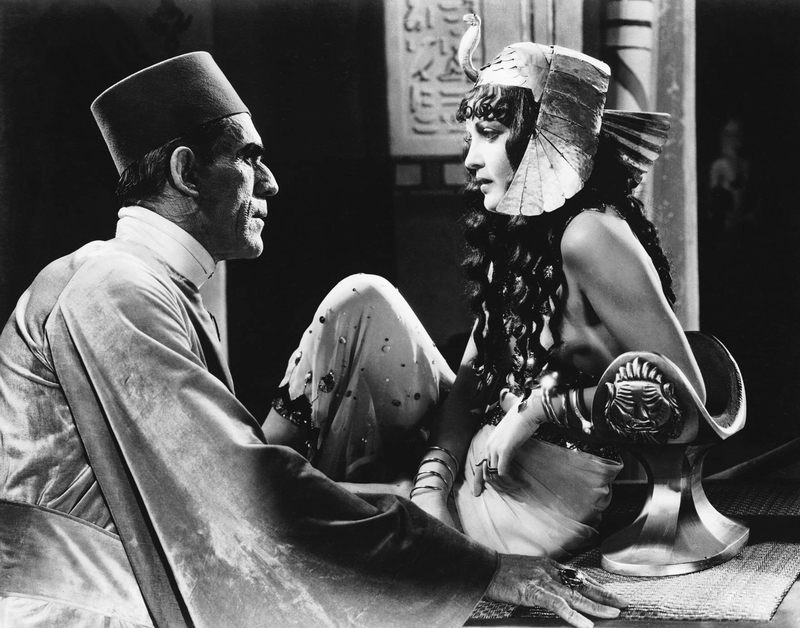 That's why in the movies, it's not only Imhotep who is punished and cursed, but everyone who comes near him. Open the coffin? Cursed with insanity like Ralph Norton (Bramwell Fletcher). Or he'll collect your soft organs as replacements for his own like he did to Dr. Terrence Bey (Erick Avari). And the phrase from 1999, "It's just a book. No harm ever came from reading a book," is a textbook example of dramatic irony.

The catch is, in the movies, the curse leaves no space for accident. It does not accept ignorance as an excuse. You messed with Imhotep's body, so you get punished eternally.

That rigidity begs the question: whom does the curse protect? And from whom are they protected? Well, factually speaking only a few of the people who worked at Tutankhamun's excavation site died within the decade, but anyone can equivocate for or against a curse with that type of fact.

According to one source, "some mastaba (early non-pyramid tomb) walls in Giza and Saqqara were actually inscribed with 'curses' meant to terrify those who would desecrate or rob the royal resting place." Egyptologist Salima Ikram goes on to explain, "They tend to threaten desecrators with divine retribution by the council of the gods. Or a death by crocodiles, or lions, or scorpions, or snakes.'"

Either way, the cursed-for-love trope of the Hollywood movie is clearly an artistic interpretation of the original. 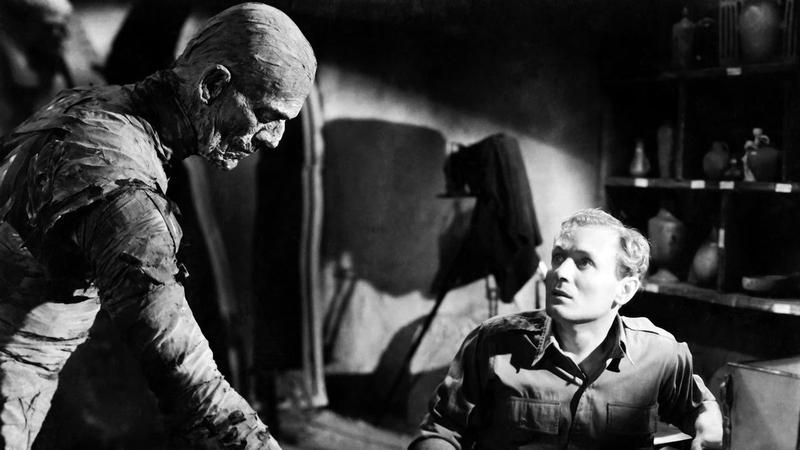 But let's go back: why did they want to terrify intruders?

Remember how Isis couldn't find all of Osiris' body? Egyptologist Brier says, "The significance is if you're going to use your body again in the next world, you want it to be complete." Similarly, the placement of the organs in perfectly fitted canonical jars (like the perfectly fitted coffin of Osiris) was essential to the passage into the afterlife.

Bottom line: cursed or not, when it comes to the contents of the tombs, You need that for later. The curses associated with mummies in real life are to protect the bodies so that souls can later reinhabit them.

So, if the curses are to protect the mummies, then who gets cursed?

Let me explain with a line from The Mummy (1932), Ardeth Bey (Karloff) scouts an incredible dig for the British Museum. When asked why, he says, "Egyptians are not allowed to dig up our ancient dead. Only foreign museums." In the context of the film, viewers are meant to infer that Egyptians cannot dig up their ancient dead because they will be cursed, which is true enough. They're protected against graverobbers, Set-imitators. But more corporeally, because Egypt was at that time occupied by the English, it was illegal for Egyptians to dig in their own home soil. (Read more about the Abdel-Rassoul story, if you're curious about that history.)

With those colonial laws in mind, we can read the exposition of the 1932 film in a different, ironic lens. Sir Joseph says, when encouraged to skip to the juiciest find of the day's dig that the purpose of archaeology is to "increase the sum of human knowledge of the past, not to satisfy our own curiosity." That's a very pretty sentiment, but it's not at all accurate of the time period, not by what Imhotep says, and not by the Finders-Keepers rationale still in place. In fact, many of the artifacts recovered from Egypt by western powers have never been returned to their homes. That's why you can see the Rosetta Stone in Paris, but not in Egypt.

This type of plunder — literally, "the violent and dishonest acquisition of property […] typically in a time of civil disorder" — is in fact, exactly what activates the curse of the mummy. In real life, the mummies are not the buried-alive corpses of those who suffered heinous punishments for crimes against the state, like in the movies. They're preserved bodies of people who need to reinhabit them later to get to the afterlife. The artifacts surrounding them are not treasures; they're supplies for the journey. If a person doesn't have enough supplies for the most important passage of their life, then they don't make it. The original curses protect the mummies themselves against plunderers and archaeologists.

I'll have to be honest, though, that I'm part of the problem: when I laid eyes on an actual preserved mummy in the Egyptian Museum, it did satisfy my own curiosity.

"So… this is a real mummy," my boyfriend said aloud, too loud, from the other side of the bulletproof display case as he stared at the sandaled feet of Yuya. "This is someone's body. Right here. In their coffin. This is a person. From 3,000 years ago. Isn't this disrespectful?"

The short answer is, Yes.

The longer answer is, Yes, and this kind of exploitation and relocation is one thing that the original curses tried to protect against.

The longer, but still not-too-long answer is, Yes, but it is in fact, "increas[ing] the sum of human knowledge of the past."

"But," I said back, over the gold-painted surface of the centuries-old sarcophagus, "we're not the ones who robbed them from their graves. We're learning about how they lived. And died."

He paused and asked, "Yeah, but would they want us to do that?"

My guess is that they would not, that they would prefer to be left to rest intact, ready for their pilgrimage to the afterlife. They certainly would not like their organs to be stolen and sold for profit on black markets or even displayed for educational purposes. But does that mean I still get to reap the benefits of these transgressions without consequence? More recent history indicates that my innocuous intention absolves me, but the ancient curse is likely more rigid.