Their remakes of HOUSE ON HAUNTED HILL and 13 GHOSTS kicked ass. And then… 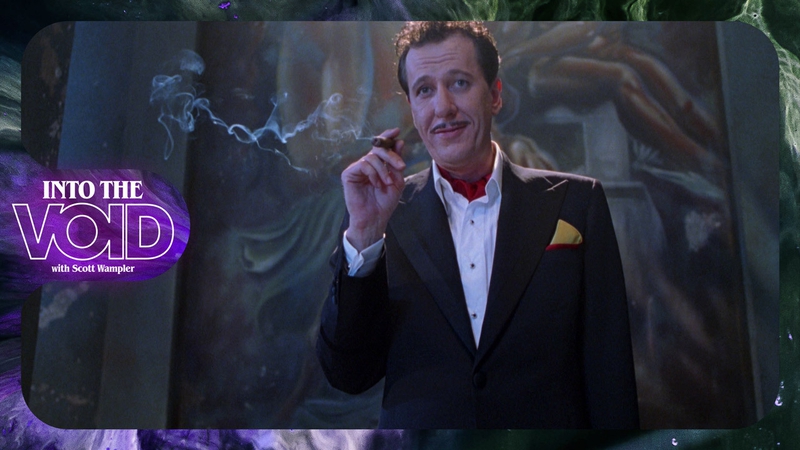 Back in the late ‘90s, legendary film producer Joel Silver joined forces with director Robert Zemeckis and fellow producer Gilbert Adler to form a new production shingle under the Silver Pictures umbrella. They called it Dark Castle Entertainment, and their mission was simple: to remake the horror films of William Castle, the beloved huckster/director who’d struck box office gold in the ‘60s by pairing in-theater gimmicks with spook-a-blast spectacles like The Tingler (the theatrical rollout for which involved installing “buzzers” under certain seats in the auditorium), 13 Ghosts (audiences were given what were essentially blue-and-red pane 3D glasses, which – depending on which pane you looked through – would reveal or hide the film’s titular ghosts), and House on Haunted Hill (which terrorized some of its viewers by dangling a red-eyed skeleton over the crowd on a bit of string).

At first, Dark Castle’s plans called for bringing back these Castle-style gimmicks along with the properties themselves, but in the end, both of those intentions would be abandoned. The company, which is still going strong today (they’ll release a highly-anticipated prequel to 2009’s Orphan later this year; last year, they produced Simon Barrett’s Seance), only ended up remaking two Castle features … and only one of them got an accompanying gimmick. That’s a real shame because those first two efforts were legitimately fun, impressively freaky affairs that have only grown sharper and more beloved over the past two decades. 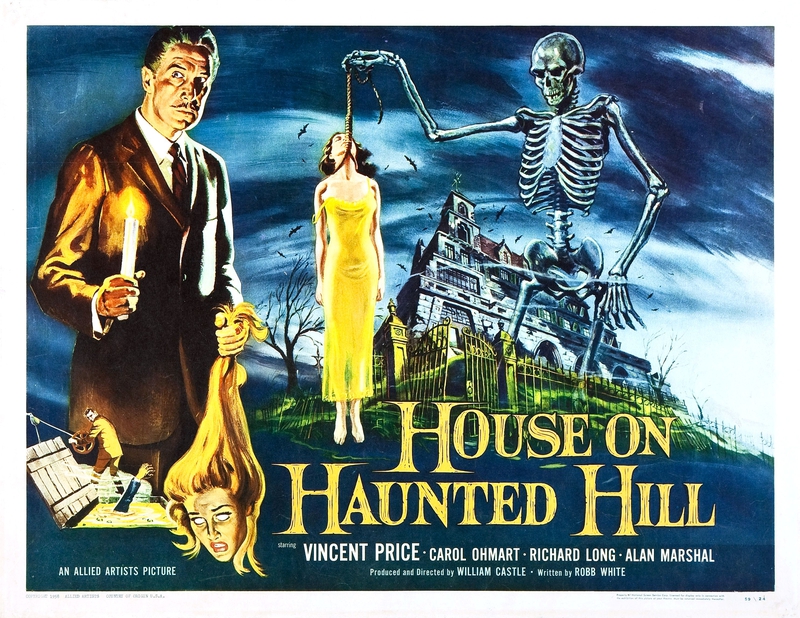 Work began in 1997, when the company hired director William Malone and screenwriter Dick Beebe to hammer out a screenplay for a remake of 1959’s House on Haunted Hill. A year and a half later, their script had been locked and shooting had begun with a cast that included Geoffrey Rush (filling in for Vincent Price; I once heard someone describe Rush’s performance here as “Geoffrey Rush playing James Woods playing Vincent Price,” and that’s about as spot-on a description of a performance that I’ve ever heard), Famke Janssen (in the Carol Ohmart role), Taye Diggs, Ali Larter, Peter Gallagher, Jeffrey Combs and Chris Kattan (aka Mango), among others. As before, the plot revolves around an eccentric millionaire throwing his wife an elaborate birthday party, at which a number of strangers are offered a large sum of money if they can survive one night in the profoundly haunted house that’s been rented just for the occasion.

Of course, there’s a bit more to it than that. The “haunted house” is actually a decommissioned insane asylum where a number of ghastly, utterly horrific crimes against humanity were meted out by the psychotic doctor who used to run the joint. Rush’s eccentric millionaire happens to be a theme park impresario who designs attractions that seem to exist purely to scare the ever-loving shit out of whoever rides them, which leads to skepticism from the guests when shit starts getting spooky. And speaking of the guests, they are not always who they appear to be; indeed, one of them might even be involved in an elaborate murder plot with another attendee. In other words, plenty of twists and turns along the way, along with some genuinely frightening scares and more than a few gnarly kills. 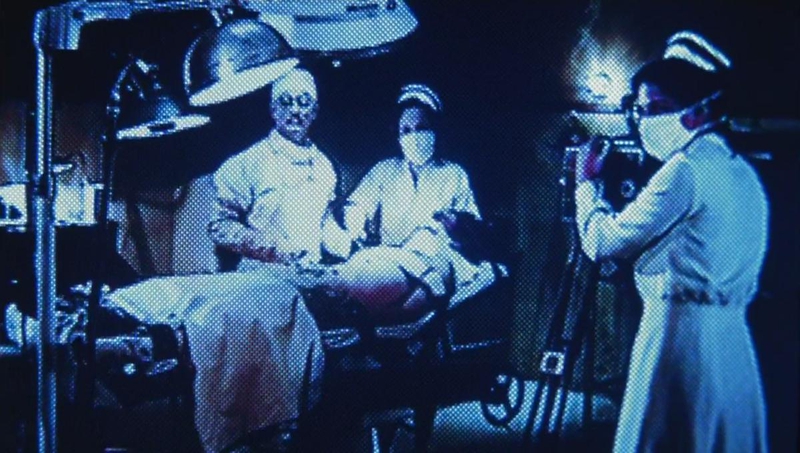 And let’s talk about that for a moment. House on Haunted Hill has a lot going for it – its cast, its production design, its well-balanced script – but a good share of the film’s power must be attributed to its director, William Malone, whose work tends towards the grimy, jittery, and viscerally upsetting (see also: Malone’s Tales From the Crypt episode, “Only Skin Deep,” as well as his installment in the Masters of Horror anthology series, “Fair-Haired Child;” Both will fuck you up). Malone balances the inherent camp of House on Haunted Hill’s script with a pleasingly slick, late-’90s-horror feel, never pulling his punches when the time comes to shed some blood. There’s a sickness roiling just under the surface of this movie, one that comes through in every scare and every cantered shot up a decomposing hallway. Good, scary stuff.

Dark Castle followed Malone’s film with their next William Castle remake, 13 Ghosts. Directed by Steve Beck (from a script by Neil Marshall Stevens and Richard D’Ovidio), the film shares a number of similarities with House on Haunted Hill – the bonkers production design, the gleeful amount of gore splashed onscreen, a talented cast that seems game for whatever, and more than a few killer ghost designs. It also performed reasonably well at the box office. A little less of a return on Dark Castle’s investment than Haunted Hill, perhaps, but still – far from a complete bomb. What’s more: it’s a movie that’s aged just as well as its predecessor (side note: I’ve got a pet theory that most viewers are either Haunted Hill people or 13 Ghosts people, with virtually no one actually loving both of them equally; I’ve even been known to stoke that possibly-imagined rivalry from time to time, but the truth is that they’re both strong in their own ways). 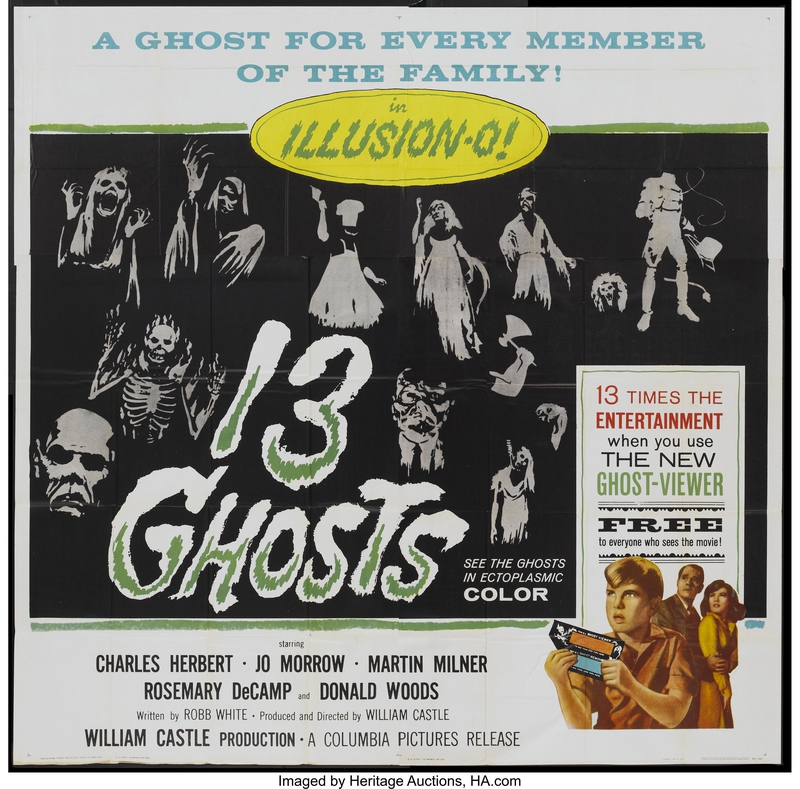 Like Haunted Hill, Stevens and D’Ovidio’s screenplay honors the goofy spirit of the William Castle source material while ladling a generous helping of late-‘90s edge over everything: the haunted house of 13 Ghosts is a slick marvel of interlocking glass rooms, traps, and such, while the ghosts themselves are far more grotesque (and bloody!) than the collection of comparatively adorable spirits Castle presented audiences with back in 1960. It’s not as faithful to the source material as Malone’s remake was, but that’s fine. It gets the job done in entertaining, grisly fashion and feels very much of a piece with Haunted Hill. You watch these two movies back-to-back, and you’ll definitely be able to imagine what an entire franchise of William Castle remakes might’ve looked like in the early aughts.

Unfortunately, this was to be Dark Castle’s final stab at the concept. 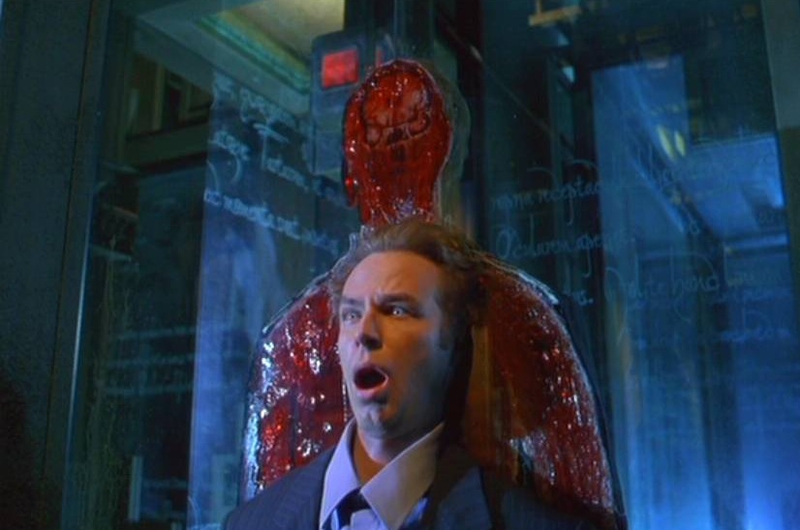 What caused ‘em to abandon their approach so early in the company’s lifespan and without an all-out box office disaster to discourage them? Dark Castle didn’t even bother giving 13 Ghosts an in-theater gimmick when it hit theaters – did they know they were done even then? I’m guessing the returns simply weren’t as high as they wanted ‘em to be. Perhaps the mandate to only produce Castle remakes proved more limiting (and less creatively inspiring) than Silver, Zemeckis, and Adler expected. Whatever the case may be, it’s a real bummer we didn’t get more of ‘em. Films like The Tingler, Strait-Jacket, and even The Old Dark House (itself a remake of a 1932 film by the great James Whale) could all do with a fresh coat of paint. And besides, wouldn’t it be nice to have a few goofy horror films in the pipeline, if only to balance out the current crop of trauma-focused efforts? I certainly wouldn’t be opposed!

If nothing else, I suppose we can take comfort in the fact that Dark Castle’s grand experiment did produce two highly watchable Castle remakes. Also worth noting: though the remake mandate might’ve been abandoned, the company has plenty of other equally entertaining titles in its catalog, including Ghost Ship, a remake of House of Wax, Orphan, and Vincenzo Natali’s excellent Splice. Both of these Castle remakes are unique enough to have drawn their own cult followings in the years since they arrived. It’d be very cool to see Dark Castle return to its roots all these years later (I would particularly love it if they brought back Malone, who’s been sadly MIA from multiplexes for quite a while now), but if I gotta be happy with just those films … well, they make for one helluva consolation prize.