Kyle Starks and Artyom Topilin talk with us about their new comic I HATE THIS PLACE. 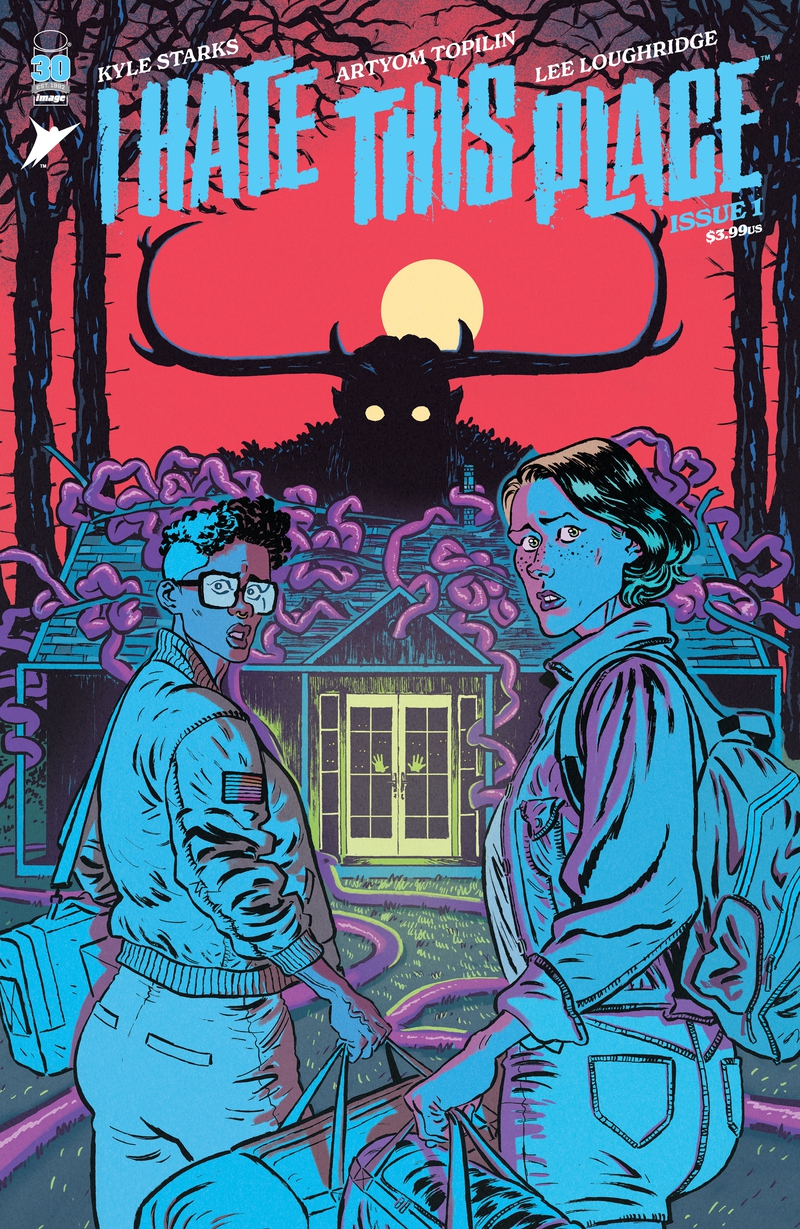 For many, when the words "comic" and "book" are combined, the mind wanders to images of superheroes such as Spider-Man and Batman with the thought of little else creeping in. But the fact of the matter is that the medium of comic books existed for decades before superheroes and is an incredibly diverse storytelling vehicle. Historically speaking, it has also been a haven for great genre storytelling, dating back to the '30s and up through modern times with books like Robert Kirkman's The Walking Dead, which inspired one of the most popular shows in the history of cable television.

The duo of Kyle Starks (Kill Them All) and Artyom Topilin (Ice Cream Man Presents Quarantine Comix Special) are keeping the tradition of horror comics alive and well with their new book I Hate This Place, which hit shelves just last week. The book, which hails from Image Comics' Skybound imprint, sees a couple, Trudy and Gabby, inherit a farmhouse as they start the next chapter of their lives together. The only problem is that the farm is already home to a mysterious force that has attracted ghosts, aliens, and other supernatural beings for decades. Awkward.

Oftentimes, horror will focus on one thing at a time. Maybe it's ghosts, or maybe it's werewolves. But it's relatively rare that someone boldly decides to take many of these horror mainstays and put them together. So, where does one get the idea to bring a bunch of disparate horror elements together under one roof? For Starks, it all started like so many modern stories do - with a podcast. "A few years back I heard about Skinwalker Ranch on a podcast. If you don't know, it's a ranch in Utah that's basically a paranormal nexus: Lights in the sky, cryptids, ghosts, so on and so forth," Starks says. "I had never heard of a story set in a place that had all the supernatural stuff and thought it would be a great setting for a larger story. I mean, why is there only one place like that, what made it that way, why is it such a magnet to the weird and horrible?" 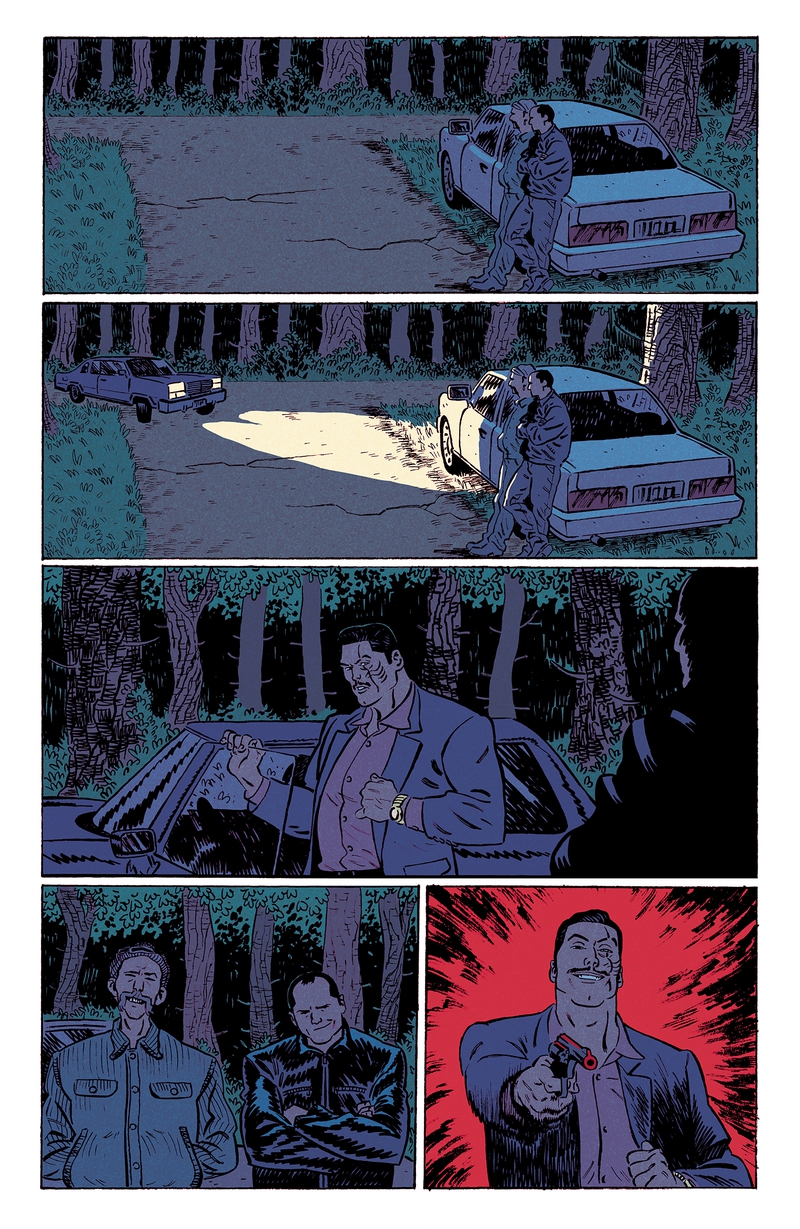 When it came to the artwork, Topilin took inspiration from various places, including the pages of Dark Horse Comics and the work of Sam Raimi. "I love Guy Davis' run on B.P.R.D. comics and occasional James Harren's arcs on it, I think this is my biggest influence on this book. I also love Junji Ito and lots of '70s, '80s, and '90s horror movies. I think there's a lot of Sam Raimi's Evil Dead specifically," Topilin says. On that front, horror lovers and comic book readers will notice the colorful nature of this book, which might be a bit counterintuitive when one thinks of horror in broad terms. Red and black come to mind, but this book has an intense color palate. Again, Topilin had classics on the brain when deciding to inject so much color into the series. 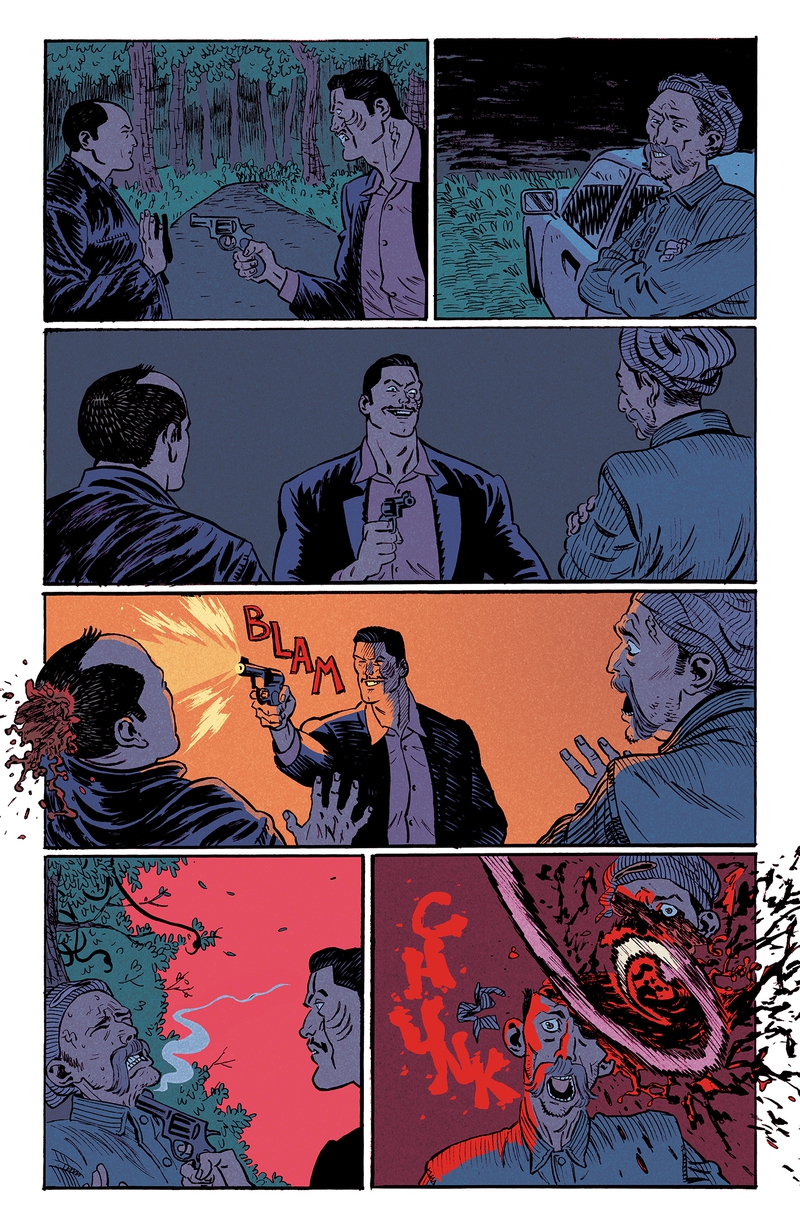 "I love the aesthetic of EC Comics and old-school comic coloring in general," Topilin says. "There's also a lot of inspiration from giallo movies and their neon colors. I was also specifically inspired to give Lee Loughridge, our colorist, some direction in colors using scenes from 1982's Creepshow, as there are a lot of scenes in that movie where colors suddenly go nuts once something spooky is happening." 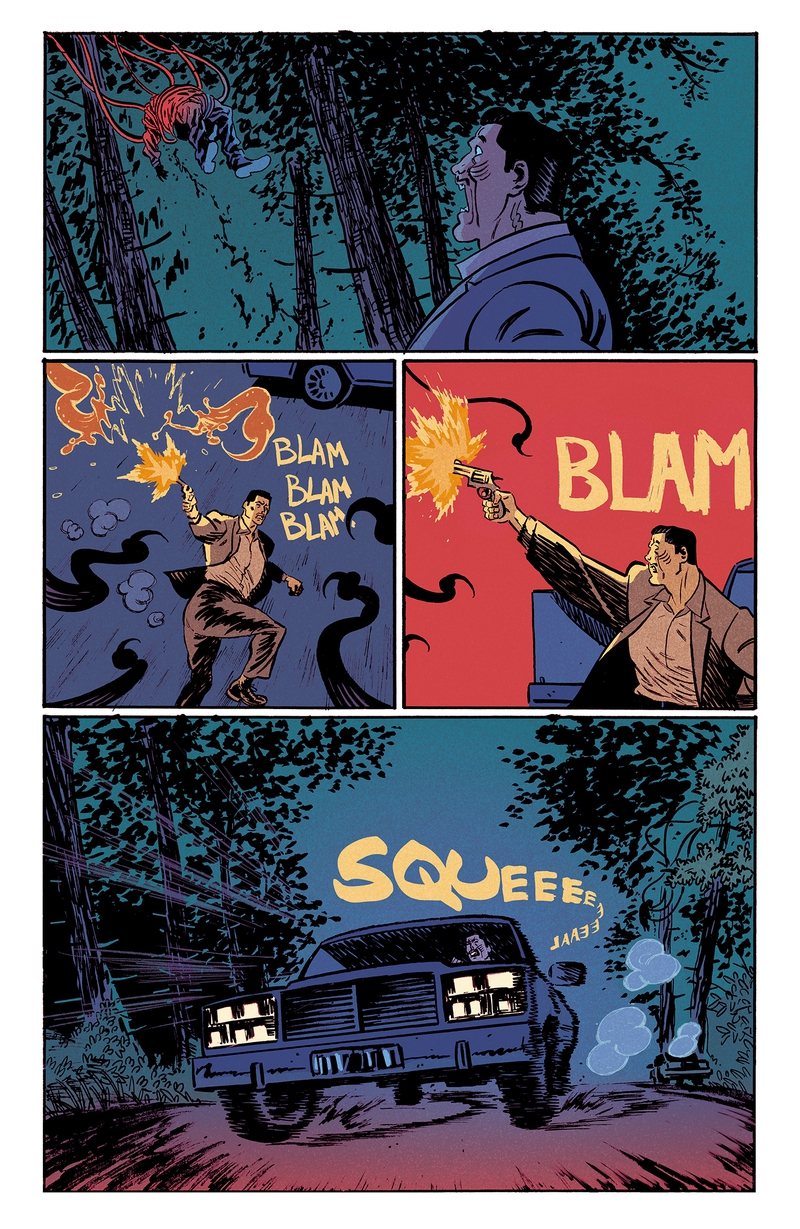 One interesting thing is that Starks admits he wasn't a big horror fan as a kid, but he found his way to it eventually, the way many of us do, through a friend. "My friend Benito Cereno does this yearly October horror list of what's streaming and where to watch. When it started years ago, he made strong recommendations, and I started just watching all of those he tagged," Starks says. "I think I can really clearly thank that list for turning me on to horror and making me a real die-hard now. I used to watch sparingly a decade ago, but now I watch anything that I hear is good." 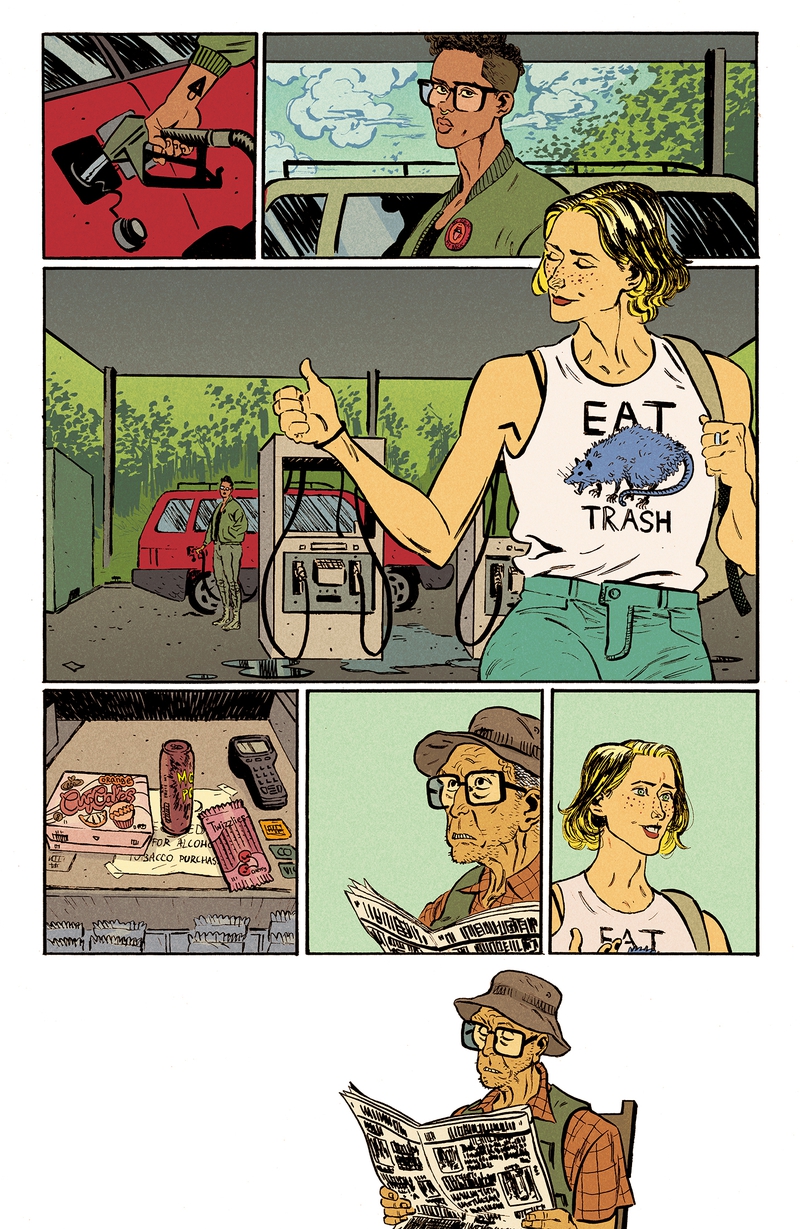 Benito is actually going to be involved with I Hate This Place, as it turns out, he will be writing backmatter for the book, starting with the second issue. "He has a great mind for appreciating and dissecting horror and what makes a good horror tale, so I'm excited to have him on the team," Starks adds.

One thing worth noting is that the original title was a bit more aggressive, imagined as Fuck This Place. While that title is still available on an alternate cover, it was changed for the main cover, and Starks explained how the original title captured a lot of his thoughts about being in such a horrific scenario. "When I pitched the book, I pitched it as Fuck This Place, and in fact, my editor Jon Moisan and I fought pretty hard for that title. It set the exact mood that I wanted the series to have. If I was in a horror scenario, it's what I would say over and over!" Starks explains. "But I think pushing for that title showed a fair amount of naïveté on my part. I didn't consider the retailers displaying a dirty word on a rack in a public setting. We were happy to make the title change, it was the smart move to make." Topilin, for his part, really liked the original title and says he still considers it the "canon" title. However, he does say that comic shops weren't crazy about it for obvious reasons. 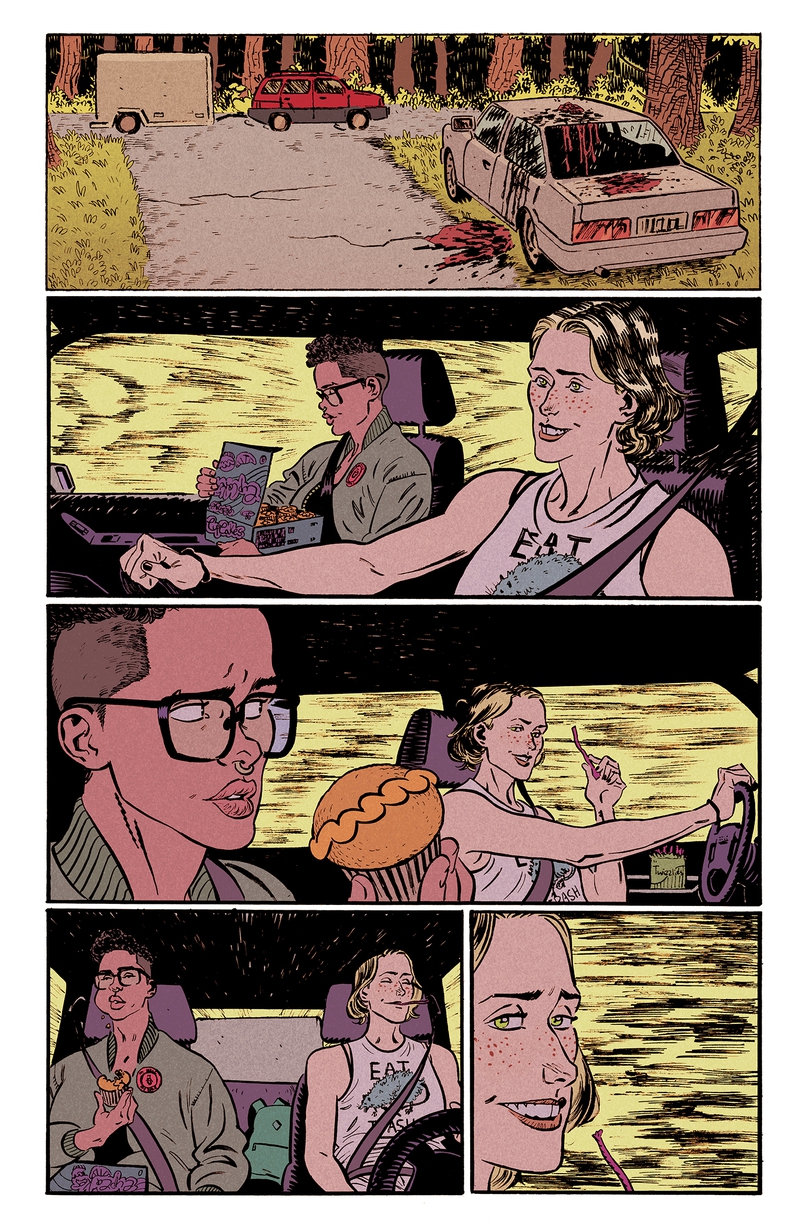 As is almost always the case with comics, the first issue tends to merely set the stage for what's to come. I Hate This Place is no exception. So, what can readers expect as the series unfolds in the months to come? In a word, "Escalation," Starks says. "Everything is going to get bigger and worse and more complicated for our protagonists, Gabby and Trudy, and for Rutherford Ranch as the home of all these awful things. I really want this to be a great, horrible story that's going to engage people for the long haul." For Topilin's part, when it comes to his contributions, he's most excited for readers to get to the third issue to see what he's cooked up - but he's not willing to spoil any surprises just yet. "Wait for issue three, and you'll know!" Topilin teases. "I can only say it might've been some bugs."

I Hate This Place #1 is now available.