I, For One, Welcome The Arrival Of Our Alien Overlords

Especially when they arrive on film. 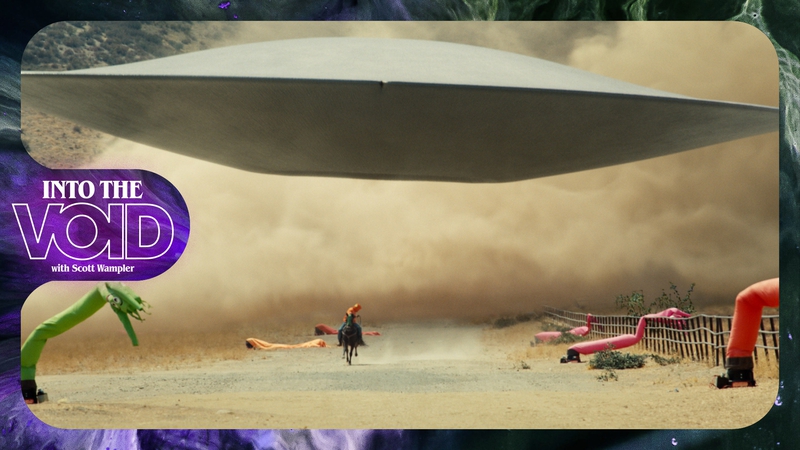 Unless you've been living under a rock for the past six months, you are well aware that Jordan Peele's highly-anticipated Nope hits theaters this weekend. It's been a long time coming – three long years since the arrival of Peele's last theatrical mindfuck, Us; nearly two years since the project itself was announced; one year since the arrival of Nope's intriguing first poster; and five months since the film's very first teaser trailer debuted during the Super Bowl – but the wait is finally over, and (in this writer's considered opinion) turns out to have been well worth all the time we spent impatiently eyeballing our calendars and tapping our watches. If you're anything like me, you're gonna have a helluva lot of fun with it.

But then, of course, this is where I landed on Nope. From the talent involved (Peele scripting and directing, Hoyte van Hoytema shooting, Keke Palmer and Daniel Kaluuya and Steven Yeun and the legendary Michael Wincott in front of the camera) to the film's nods to Spielberg and Shyamalan to my enduring love for films with titles that throw a sizable middle finger in the face of SEO practices, I was basically in the bag for this one from the moment all the contracts were signed. That Nope also turned out to be a brand-new, winning entry in the alien invasion/UFO horror subgenre is almost too much good news to bear. 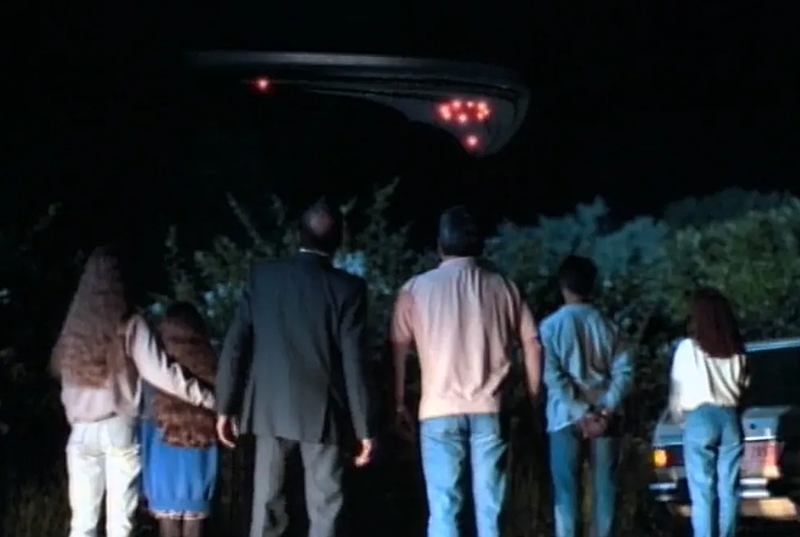 If we're being honest, this particular subgenre doesn't get a lot of attention, and I mean that both financially and creatively. Dig into the guts of Amazon Prime or Netflix, and you'll find all manner of alien invasion/UFO movies, and very few of them are any goddamn good (even worse, many are also of the found footage subgenre; if you've seen even one found footage alien abduction movie, you have more or less seen the majority of what that particular sub-subgenre has to offer, and it ain't much). Even fewer have any real budget behind them; fewer still have a script or set pieces that you can really sink your teeth into. This is all very bad news for me, a dude who grew up sort of obsessed with the very concept of UFOs.

Some of that was just my natural inclination – I was a morbid kid who loved monsters, creature FX, and pushing my tolerance for scary movies ever further. Rolled into those interests was an insatiable hunger for stories of the unexplained: Bigfoot, the Loch Ness Monster, the Bermuda Triangle, aliens, you name it. The classic version of Unsolved Mysteries was always good for a fix on one of these fronts, and I could frequently be found with my nose jammed into one of Time-Life's old Mysteries of the Unknown hardcovers. Adults seemed to have the answers about fucking everything, but none of them seemed to be able to explain Bigfoot tracks or missing airplanes or whatever the hell Betty and Barney Hill saw in the woods that one night, and what could be more fascinating than a thing my parents didn't have an answer for? Finally, I thought, even ground! 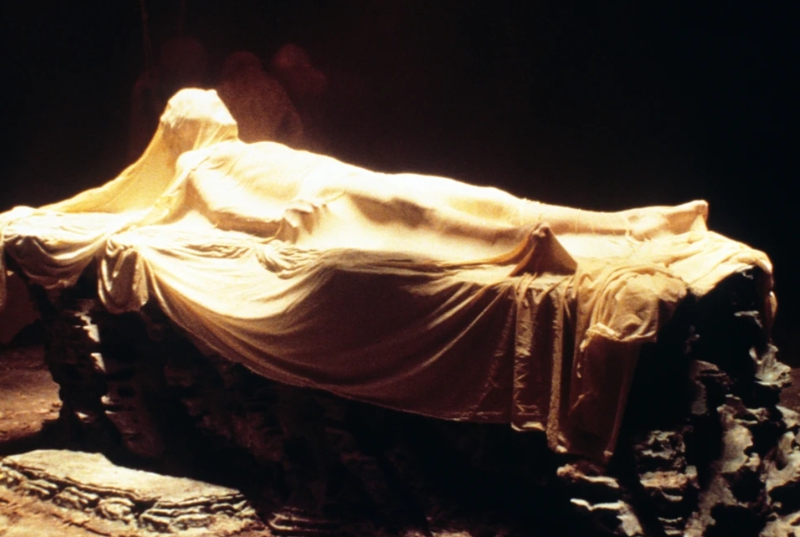 Knowing that, it should come as no surprise that I was utterly galvanized by Robert Lieberman's Fire in the Sky when it theaters in 1993. A dramatized retelling of the infamous Travis Walton abduction story (which may or may not have been heavily dramatized by the people who originally told it, depending on who you ask), Fire in the Sky remains one of the few legitimately frightening UFO movies. It earns bonus points by unfolding the story in a slow burn, building the tension methodically over about 80 minutes before showing us all the horrifying details surrounding Walton's (alleged) time on that dastardly alien ship. There's a direct nod to this sequence in Nope, and I just about threw my fist in the air and cheered when it happened.

Related: I've rewatched Fire in the Sky since catching Peele's latest, and can confirm that it holds up well. That masterful ratcheting of tension I mentioned holds up very well, and once D.B. Sweeney's Walton gets on that ship, the scares (Walton escaping his stasis pod, Walton being dragged up one of the UFO's detritus-filled hallways by yet-to-be-seen alien creatures, Walton under a thin, rubbery sheet, screaming impotently as his eye gets drilled by that giant-ass probe) still hit like uppercuts. Were Walton and company telling the truth? No idea and don't really care! A good scary movie's a good scary movie, and I'm happy to leave it at that. 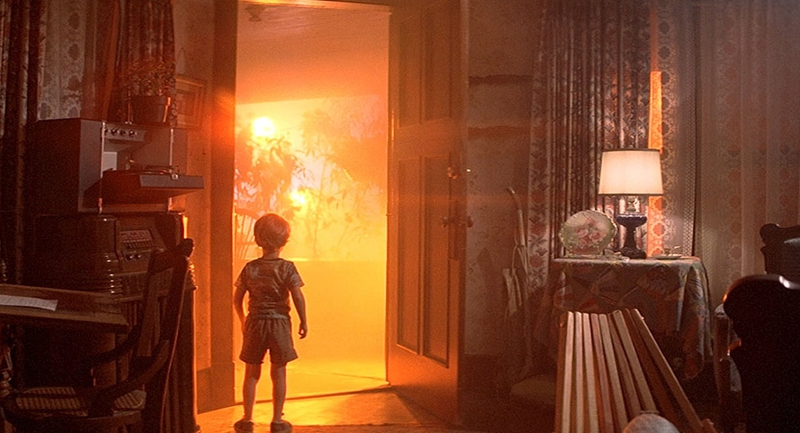 Fire in the Sky ain't the only scary invasion/abduction story Nope nods to, however. Like I mentioned up top, the film contains moments and, indeed, entire sequences that call to mind Spielberg's 1977 classic, Close Encounters of the Third Kind (which is, admittedly, only truly scary in its first half, where it's still unclear if the aliens themselves mean us any harm; the film's third act is basically the exact opposite of the one found in Fire in the Sky). That Peele and Hoytema were able to craft something that might reasonably be compared to that iconic entry in The Beard's filmography is fairly extraordinary, particularly when Peele is a mere three features into his career as a filmmaker.

Nope's closest corollary, however, must be M. Night Shyamalan's Signs (2002). They mirror one another in structure, in tone, and even in terms of their scares (I'd love to elaborate on this, along with a few other claims I'm making in this piece, but I gotta stop short to avoid spoilers; maybe we'll revisit some of this up the road a spell, once everyone's had a chance to see Peele's film). The two films are ultimately playing different games – in addition to spectacle, Nope offers up an elaborate metaphor about the perils of working in Hollywood, whereas Signs is far more concerned with matters of faith – but they're both absolutely playing around in the same zip code … up to and including the fact that I suspect Nope's third act will prove as divisive amongst moviegoers as the one they encountered in Signs. Time will tell! 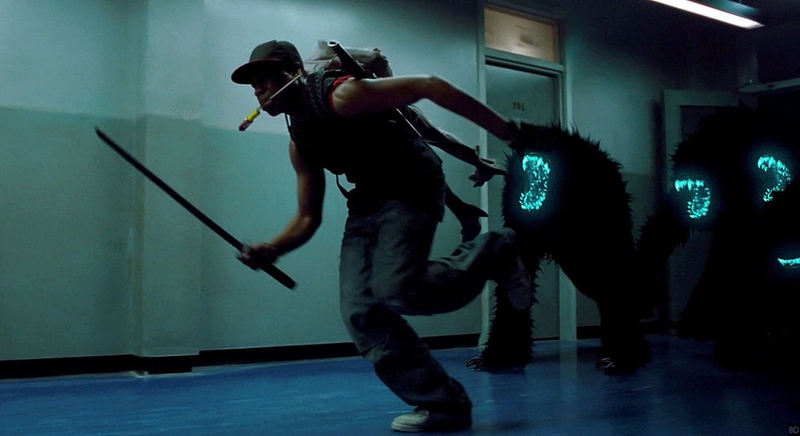 The film I'm really looking forward to double-featuring with Nope, however, is Joe Cornish's exquisite Attack the Block (2011), which finds John Boyega leading a crew of affable miscreants against an alien invasion happening in and around a low-income housing block somewhere in London. The two don't share many similarities beyond the surface level, but their differences are precisely what make me want to watch them back-to-back. If Peele's film is about spectacle, wide-open spaces and awe (and a bit of low-key, justified anger regarding the entertainment industry), Cornish's film foregrounds a different kind of anger and jettisons grand spectacle in favor of close-quarters combat. There's spectacle to be found in Attack the Block, to be sure, it's just of a completely different sort, and I'm curious to see what these films bring out in one another when approached side by side.

Given how tireless I've been in my pursuit of well-made, actually-scary alien invasion/abduction movies over the years (sorry, no, Independence Day does not count) and given how intrigued I've always been about the concept of being of alien life, I often wonder how I'd feel about the idea of living – and, presumably, quickly dying – during an actual extraterrestrial invasion. Short answer: pretty great, actually! If the apocalypse were to happen within my lifetime (a question which, quite frankly, seems to be less and less of a question every day here in 2022), I think I'd prefer to go out that way rather than in an eyeball-melting climate disaster, or as the victim of some sorta plague, or wiped off the map in the blink of an eye by a nuclear explosion. I mean, at least with the aliens, you'd get to see some awe-inspiring shit before cashing in your chips, right? Plus, you'd be getting confirmation of alien life in the process! That, my friends, is what this writer calls a "twofer."

Anyhoo, I'll be curious to see where audiences land on Nope. From where I'm standing, it's a more-than-worthy addition to Peele's body of work, a rollicking bit of spook-a-blast, popcorn entertainment whose greater metaphors and symbols are less foregrounded than they were in his earlier films (they're there if you want 'em, basically; I wanted 'em and was happy with what I got). But it also doubles down a bit on the "You're just gonna have to go with me on this" dream logic that left some folks scratching their heads after Us, and I'm interested to see if that ends up being embraced by Peele's fanbase or offered up as proof of his burgeoning skills as a storyteller. All I know for sure is this: if you, too, are big on alien-based scares or UFO abduction stories, you're probably gonna end up having one of your favorite moviegoing experiences of the year. This summer ain't so bad, after all!