Heart In The Art: YOU'RE DEAD HELEN Exclusive Trailer Debut

Supernatural horror romantic comedy shortlisted for an Academy Award with a feature-length adaptation produced by Sam Raimi in the works. 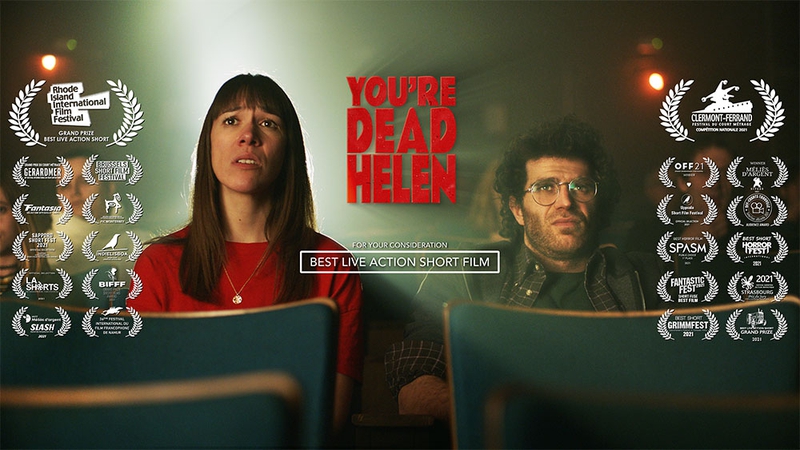 Twenty minutes jam-packed with heartache, visual FX and yes... horror. You're Dead Helen (T'es Morte Hélène) is a tender (and horrifying) live-action short film from writer/director Michiel Blanchart. And it's shortlisted for an Oscar nomination. Voting is currently underway, through February 1st. This genre-blending and bending supernatural romantic comedy explores grief and the pain of letting go with a whole lot of heart and healthy doses of horror. Blanchart approaches it in such a way that one can't help but be instantly drawn in. Don't take my word for it, just ask Sam Raimi who is set to produce the feature-length adaptation. Raimi tells Variety, "I saw the great potential as everyone does who sees it, that it could be a great feature film. It’s so entertaining and scary. It’s hard to do scary and funny and Michiel does both beautifully, building suspense and telling a romantic story in 20 minutes."

The real Cinderella story aspect of this is that Blanchart had Raimi in mind as inspiration for this project. And now he's adapting the feature-length version with Raimi. It's one of those wilder than wildest dreams moments that you can't help but root for. In an exclusive Convo X Fango, Blanchart was very open about feeling depressed and out of place. The movie was completed but nothing was happening with it just yet, Blanchart was living in a new place that didn't feel like home. So to cheer himself up he went online, bought a Darkman poster, and hung it on his wall. Two months later he was on his first Zoom with Raimi. Like his own very specific version of a summoning circle. (Individual results may vary).

Of that first meeting, Raimi said, "I was impressed with him on our Zoom meeting and saw that he was intelligent, funny, savvy and mostly super talented from watching the movie." After a brief chat with Blanchart it's impossible not to agree. The short film is beautiful and funny and scary, and the real-life story behind the journey from short to feature is perhaps nearly equally so.

The film has been acquired by TriStar Pictures for a feature film remake.  Blanchart will direct the feature as his feature film debut, produced by Sam Raimi and Rob Tapert at Ghost House and Michaël Goldberg and Boris Van Gils at Playbox Pictures. Watch our full conversation with Blanchard about the wild journey to get here and watch the official trailer debut below. The full-length short film is available for free on Shortoftheweek.

The live-action short is produced by Daylight Films and Formosa Productions; is supported by Canal+, FWB and Region Grand Est; and has played at numerous film festivals around the world. It won the Oscar-qualifying Grand Prize at the Rhode Island International Film Festival, Best Short Film at Sitges, the Short Fuse Award at Austin Fantastic Fest and the Grand Prize at the Gerardmer Film Festival.