Groping In The Dark: Evoking Fear In THE NIGHT CAGE Board Game

The creators discuss building dread and tension within the realm of a tabletop game. 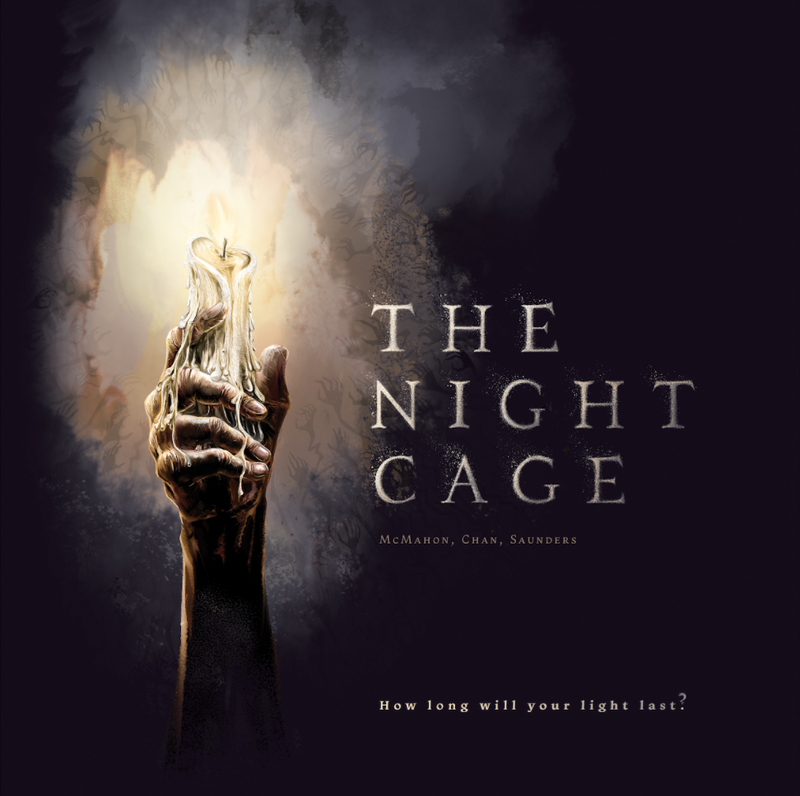 “You awake to discover that you and several others are imprisoned within a pitch-black labyrinth.” This first line from the rule book for The Night Cage, a cooperative tile-laying laying game designed by Chris McMahon, Roswell Saunders, and Christopher Chan and published by Smirk & Dagger Games, is tantalizing in its directness, it’s simplicity, and its implications. Who are we, where are we, and why are we here? You might be surprised that I’m happy to report The Night Cage will offer definitive answers to none of these questions as players seek to escape the Tartarus into which they’ve been dropped.

Of this minimalist approach, co-designer Chris Chan says, “You’d think working with two writers, you’d have tons of lore, but, that’s how you know you’re working with two good writers. You have literally none, and it still does the trick.” 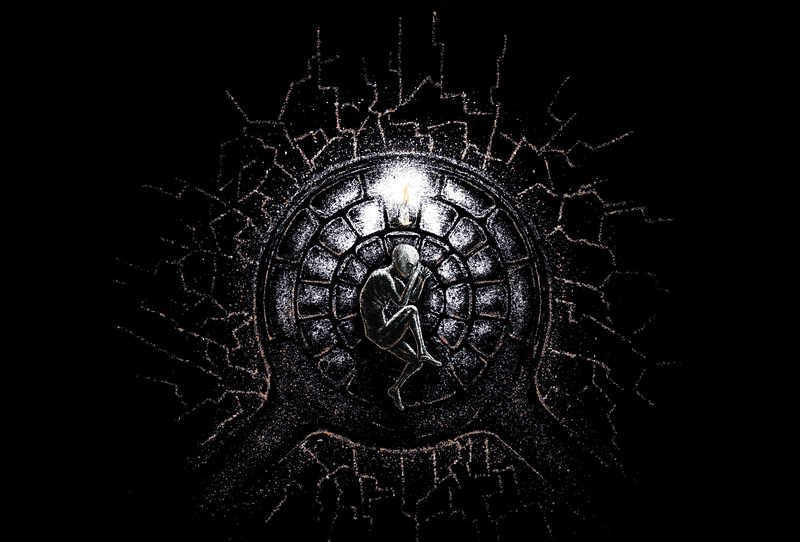 In The Night Cage, one to four players find themselves alone in a cramped, rocky passageway, each possessing a single candle lighting only the areas immediately adjacent to them. On their turn, players will move a single space in the orthogonal direction of their choice, drawing tiles from the limited stack to illuminate their new surroundings. However, as they leave their previous tiles behind, they are discarded from the game, lost forever in the darkness. Moving back to a previous space illuminates new tiles and the alarming discovery that the labyrinth has shifted.

“There’s something really wonderful about the broad concept of the world being created and destroyed by the range of your candlelight,” says the game’s publisher and CEO of Smirk & Dagger, Curt Covert. “Certainly there are lots of tile-laying games, there are lots of maze games, but this one was unique in the fact that, as you move forward, it’s lighting your way, but the tiles you leave behind disappear forever and, if you turn around and go back, it’s something completely new, and nothing makes you feel more like you’re lost in a labyrinth than that sense of the unknown, and I thought that was absolutely brilliant and that’s one of the things that absolutely captured my heart and soul.” 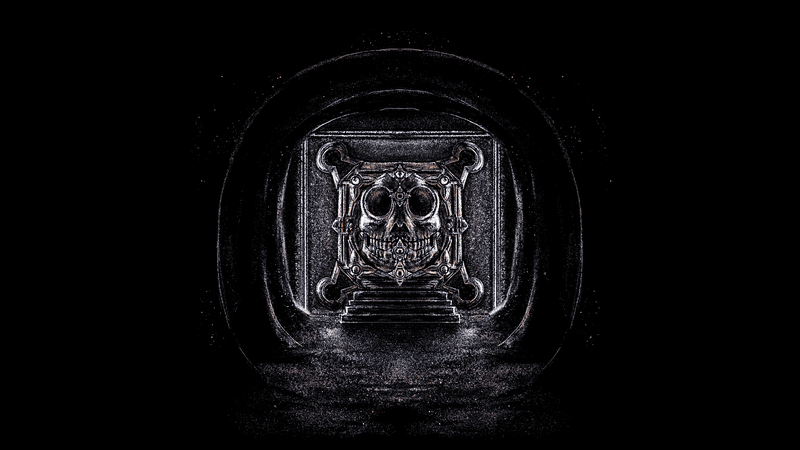 To avoid groping around in the dark forever, players must locate a gate, opened by four keys located somewhere in the labyrinth, and pass through together. And yes, everyone must escape, or no one does. Players may hold only one key each, so if one of them discovers a tile with another key, they must strategize a way to keep that tile illuminated by staying in its vicinity until another player can claim it. Gates operate the same way, and once too many gate tiles or keys are lost, so is all hope.

So why not just stand still, and everyone can move along together? Players may, indeed, choose not to move during a turn, and they will gain a “nerve” token, a spendable resource in the game used to mitigate consequences, but remaining motionless comes with its own perils. Many tiles show cracks on the ground, and these tiles will crumble on the next turn, casting players into a pit and extinguishing their candle. You can have your candle relit by moving adjacent to another player carrying a lit candle, but until then, your movements reveal only the single tile beneath your feet. Without a light to guide you, your world becomes a bit smaller and your situation more desperate. 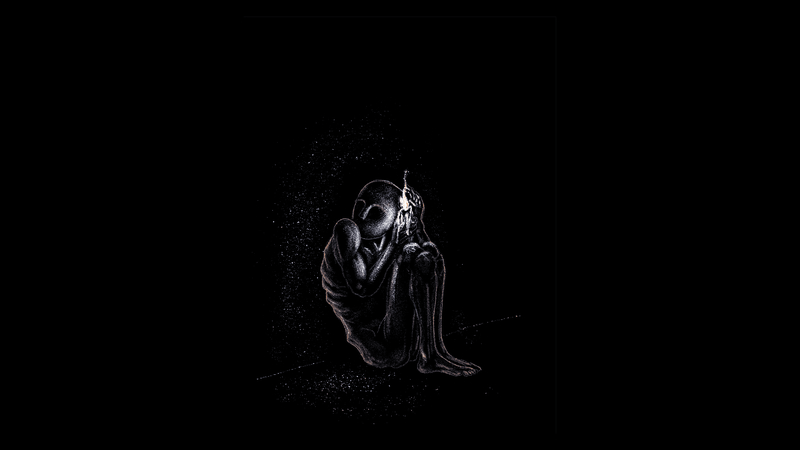 And you’re not alone in the dark.

Periodically, players will encounter strange creatures known as “wax eaters.” If players remain in a wax eater’s line of sight at the end of a turn, the creature will attack in all four directions at once and along a straight line. If a wax eater’s attack hits you, your candle is extinguished and, frustratingly, three tiles are discarded from the draw stack, bringing everyone closer to being trapped in this lightless hellscape forever.

Chris Chan adds, “with The Night Cage, something that was really important to us is that one, it has to actually evoke fear. A lot of horror games put horror genres onto things or horror tropes, and that’s fun, there’s absolutely nothing wrong with that, but evoking fear is really, really hard in a board game because you can’t do a jump scare, so you have to evoke a different kind of fear. You have to look at a game in the way that it creates dread, and that was a big guiding principle to a lot of the mechanical choices we made with the game, ultimately.” 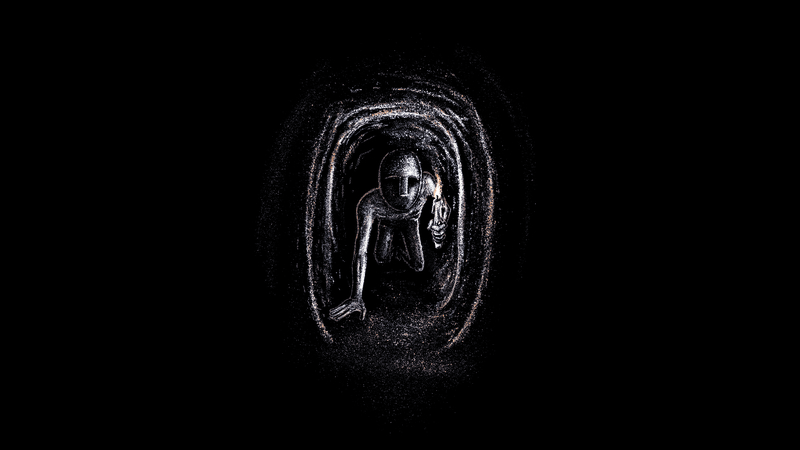 There is a delicious tension in the game. You need to move forward and find those keys and the gate, but there is danger potentially lurking under every new tile. You can stand still, but there is peril there, too, and that slowly diminishing draw stack of tiles, which acts as a timer in the game, moves closer and closer to the end, after which players enter the “Final Flickers” phase of the game. Once no new tiles can be drawn, after each turn, an already laid tile on the board must be discarded, steadily shrinking the player’s world and removing potential avenues to escape.

Sartre’s No Exit includes the famous statement, “Hell is other people.” For Sartre’s trapped protagonists, that might be true, but in The Night Cage, your fellow prisoners are your only salvation. Publisher Curt Covert says, “It really is about risk mitigation. The strategy of the game is: how are you, as a group, going to deal with the risk that exists in that random nonsense? How do you prepare for it, and then how do you deal with the things you end up being forced into?”

Regarding the themes of The Night Cage and its cooperative gameplay, co-designer Chris McMahon comments, “Ross is a recovering English major, Chris is a recovering theater major, so we all wanted to do something that spoke to thematic storytelling, so the idea of personal vs cooperation, of making decisions with other people, of solipsism and existence… all of these things play into it… It also sort of gives the game kind of a three-act arc, too, which is nice and something that we wanted.”

The designers of The Night Cage came together through their work at an advertising agency in Manhattan. The game sprang from their imaginations at lunch one afternoon when trying to avoid thinking about solving some more work-related problems. Luckily for them, the restaurant they chose had square coasters, which led to some quick and dirty prototyping at the table.

“We ate there a lot,” adds Saunders. 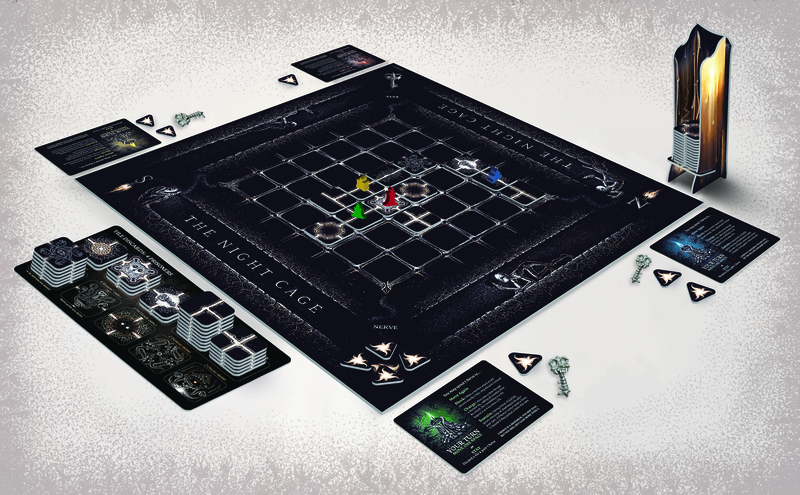 The art direction went through several iterations, as would be expected, but the look and feel of the artwork of the final production of The Night Cage is a bit of an anomaly in the board game world. Co-designer Chris Chan is also the game’s illustrator, and he provided all of the stark, mostly black-and-white artwork. The only color elements are muted, glowing pools of light emanating from the players’ candles. It’s beautiful and quite striking. 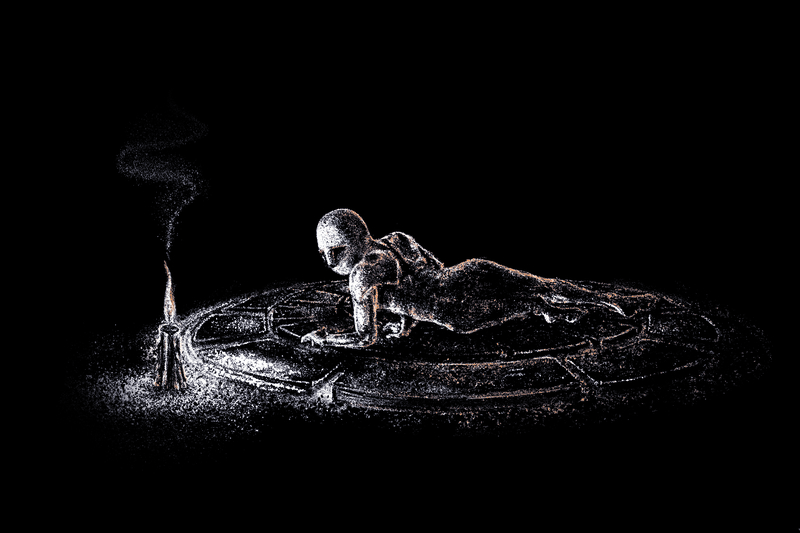 “The way that we got that stippled look for it,” says Chan, “I was getting frustrated, and I was distracted, and I went and did what I do and looked at a camera review because I do that when I get distracted sometimes. And one thing that they always talk about in camera reviews is what’s the ISO tolerance, what’s the noise tolerance on this thing? How grainy does this stuff get when things get dark? Well, your eyes do that, too. If you close your eyes in a dark room and open them and stare at a mostly blank wall, you’ll see the noise. So, I started exploring that as a sort of texture to build things out of, and then it became the defining feature of the tonality of the world in the way that light and dark interacted.”

The Night Cage has been a great success for McMahon, Saunders, and Chan and for publisher Curt Covert’s Smirk & Dagger Games. Not surprisingly, the four have been conspiring on what’s next. While they might publish some additional content, the group doesn’t want to release anything that will make the existing game any bigger than it is. Covert offers a hint of what’s to come for a follow-up game: “I think it’s a matter of the story continuing. So, you’ve gotten to the gate, you’ve turned your keys, you’ve escaped this hell… into what new hell? With what new challenges? I think that is going to be the way forward for The Night Cage.”

Chan adds, “One thing I can say for sure about whatever the next thing is… it will not tell you what it is. It will actively refuse to tell you anything about yourself, and you’re just going to have to experience it.”