Grady Hendrix Knows HOW TO SELL A HAUNTED HOUSE

Now on bookstore shelves, but we have your sneak peek inside right here! 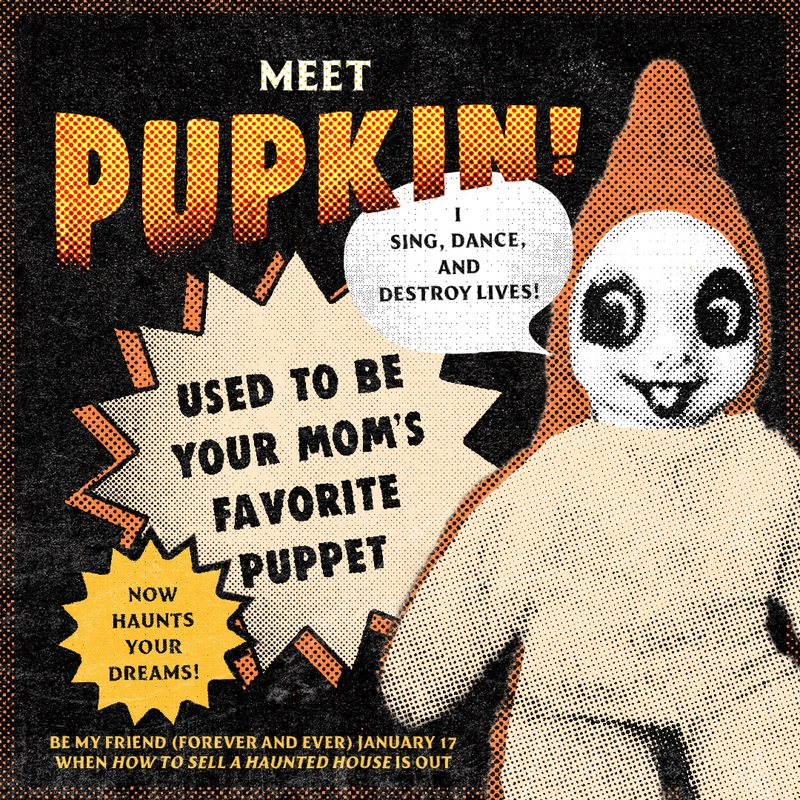 Today is a good day for Grady Hendrix fans! The best-selling author of My Best Friend's Exorcism, Final Girl Support Group, has a brand new book hitting bookstore shelves — How To Sell A Haunted House. And even luckier, we have a little sneak peek inside the pages of the book in the form of a little excerpt to whet your Haunted House appetite. Enter into a house of dolls, but first have a look at the official synopsis below.

Most of all, she doesn’t want to deal with her brother, Mark, who never left their hometown, gets fired from one job after another, and resents her success. Unfortunately, she’ll need his help to get the house ready for sale because it’ll take more than some new paint on the walls and clearing out a lifetime of memories to get this place on the market.

But some houses don’t want to be sold, and their home has other plans for both of them… 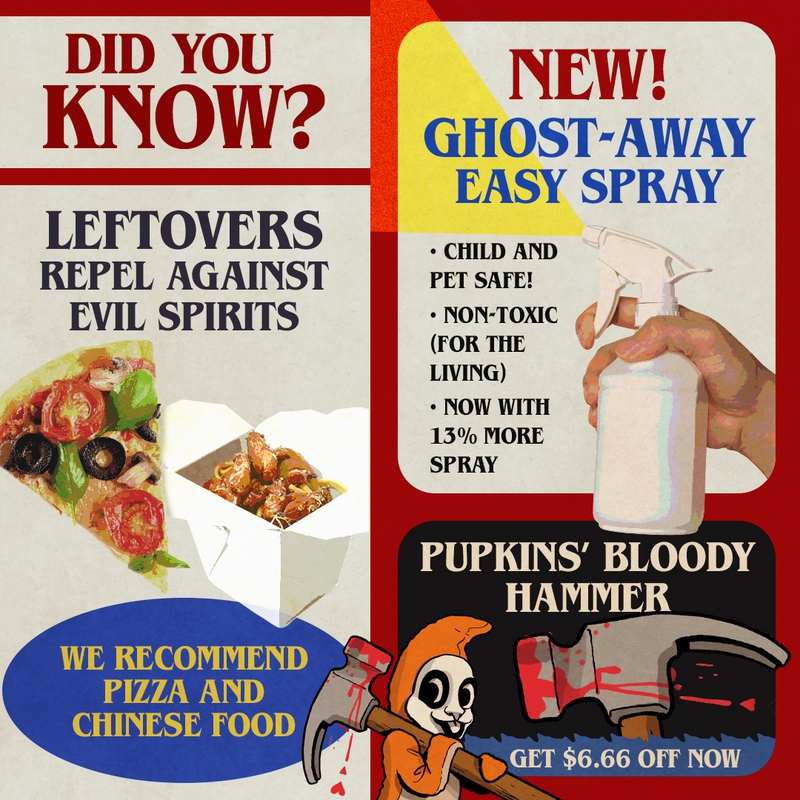 Grady's signature style of heartfelt horror and humor fuse effortlessly together, and we can't wait to see how he tackles the real estate market and the art of selling haunted houses. The use of leftovers to repel evil spirits and the ghost-away marketing give us the sense that we'll find the brand of dark humor we've come to love. Here's an official excerpt from How to Sell a Haunted House by Grady Hendrix.

Louise pulled into the driveway and got out. Her rental car looked too bright and blue next to the dry front yard. The camellia bushes on either side of the front step looked withered. The windows were dirty, their screens blurry with grime. Dad hadn’t put in the storm windows yet, which he always did by October, and no one had swept the roof, where dead pine needles clumped into thick orange continents. A limp seasonal flag showing a red candle and the word Noel hung on the front porch. It looked grimy.

The first blank line from Listr appeared inside her mind and filled itself out: Walk through house. She’d start here. Do a walk-through. Assess the situation. That made sense, but her feet didn’t move. She didn’t want to go inside. It felt like too much. She didn’t want to see it so empty.

However, being a single mom had made Louise an expert at doing things she’d rather avoid. If she didn’t rip off the Band-Aid and take care of business, who would? She forced her feet to walk across the dry grass, creaked open the screen door, and grabbed the front doorknob. It didn’t turn. No keys. Maybe the back? She walked around the side of the house where the yellow grass faded to dirt, unlatched the waist-high chain-link gate, banged it wide with her hip, and slid through.

Mark’s lumber sat abandoned in the middle of the backyard, a pile of once-yellow pine faded to gray. Louise remembered how excited her mom had been when Lowe’s dropped it off for the deck Mark had promised to build back in 2017. It’d sat untouched ever since, killing the grass.

Not that there was much grass to kill. The backyard had been a blind spot in their family, a big weedy expanse of dirt and whatever mutant grass could survive without watering. Nothing significant grew out back except for a ridiculously tall pecan tree in the middle that was probably dead, and a twisted cypress in the back corner, which had gone feral. A wall of unkillable bamboo separated them from their neighbors.

Louise grabbed the rattling old knob on the back door to the garage and her heart stopped. She expected it to be locked, but it turned beneath her hand and opened with a familiar fanfare of squeaky hinges. She made herself step inside.

Shadowy cousins and neighbors and aunts crowded the garage, drinking Coors the way they always did on Christmas Day, Bing Crosby playing on a boom box, the women smoking Virginia Slims, adding mentholated notes to the pink perfection of roasting Christmas ham. Louise’s eyes adjusted to the gloom and the phantoms faded and the garage looked twice as empty as before.

She walked up the three brick steps to the kitchen door and froze.

She heard the muffled voice of a man speaking with confidence and authority from somewhere inside the house. Louise stared through the window in the middle of the door, peering past its sheer white curtain, trying to see who it was.

The brick-patterned linoleum floor unrolled past the counter separating the kitchen from the dining room and stopped at the far wall where her mom’s gallery of string art hung over the dining room table. Its plastic tablecloth got changed with the seasons, and right now it was red poinsettias for winter. The JCPenney chandelier hung overhead, the china hutch pressed itself into the corner, the chairs kept their backs to her.

The man continued talking from inside the house.

She could see a small slice of the front hall with its green wall-to-wall carpet but no people. A woman asked the man a question. Was Mark in there with a Realtor? Was he already taking stuff? Louise hadn’t seen any cars parked outside but maybe he’d parked around the corner. He could be sneaky.

She carefully turned the latch. The door cracked its seal, then swung open, and the man’s voice got louder. Louise stepped inside and eased the door closed behind her, then crept forward, ears straining, trying to figure out what he was saying. Details registered automatically—her mom’s purse sitting on the end of the counter, the answering machine blinking its red light for 1 New Message, the smell of sun-warmed Yankee Candle—then she reached the dining room and stopped.

The man’s voice sounded big and small at the same time and Louise realized it came from the living room TV. Her scalp tightened. She looked into the front hall. To the left, it got dark, leading deeper into the house. To the right was the living room, where someone was watching TV. Louise held her breath and stepped around the corner.

Hundreds of her mom’s dolls stared at her. Clown dolls on top of the sofa, a Harlequin wedged against one of its arms, German dolly-faced dolls crowded a shelf over their heads, a swarm of dolls stared through the glass doors of the doll cabinet against the far wall. On top of the doll cabinet stood a diorama of three taxidermied squirrels. The TV played the Home Shopping Network to two enormous French Bébé dolls sitting side by side in her dad’s brown velour easy chair.

That’s what her mom had called them when she bought these ugly, expensive, three-foot-tall dolls, with their hard, arrogant faces and coarse, chopped hair.

No matter where you two go, I can keep my precious babies with me forever, she’d said.

The girl sat stiffly in her layered summer frock, arms by her sides, legs sticking straight out in front, strawberry-stained lips puckered into a pout, eyes blank, staring at the TV. The boy wore a navy blue Little Lord Fauntleroy jacket with a white Peter Pan collar and short pants, and his blond hair looked like it had been hacked into a pageboy with a pair of dull scissors. Between them lay the remote. They’d always creeped Louise out.

She looked down the hall but didn’t see any other signs of life—the bathroom door was open, the bedroom doors were closed, no lights were on—so she made herself pluck the remote from between doll Mark and doll Louise, trying not to touch their clothes, and turned off the TV. Silence rushed in around her, and she stood alone in the house full of dolls.

Excerpted from How to Sell a Haunted House by Grady Hendrix, published by Berkley, an imprint of Penguin Publishing Group, a division of Penguin Random House, LLC. Copyright © 2023 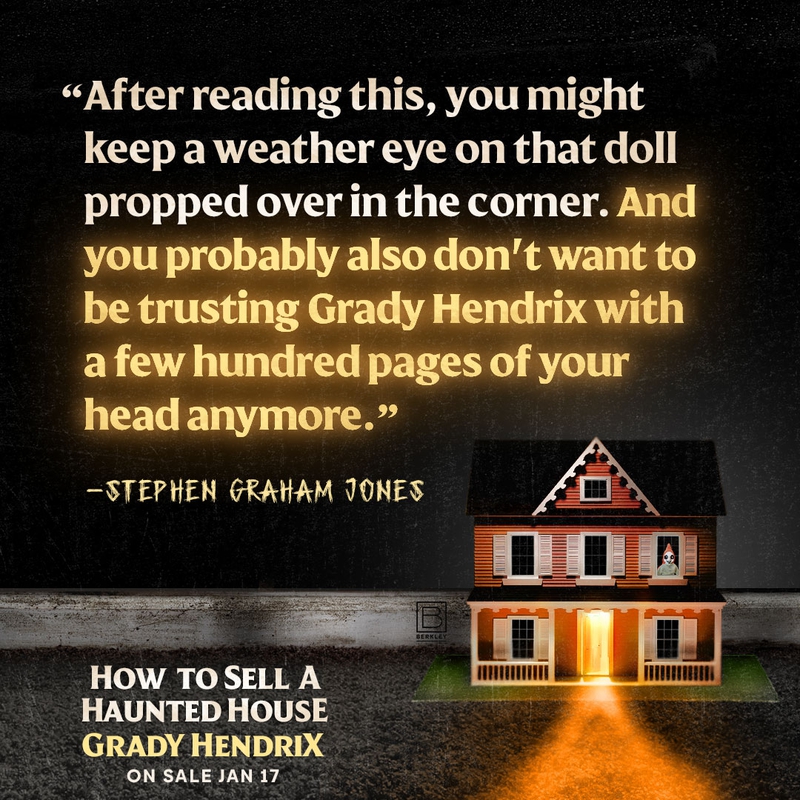