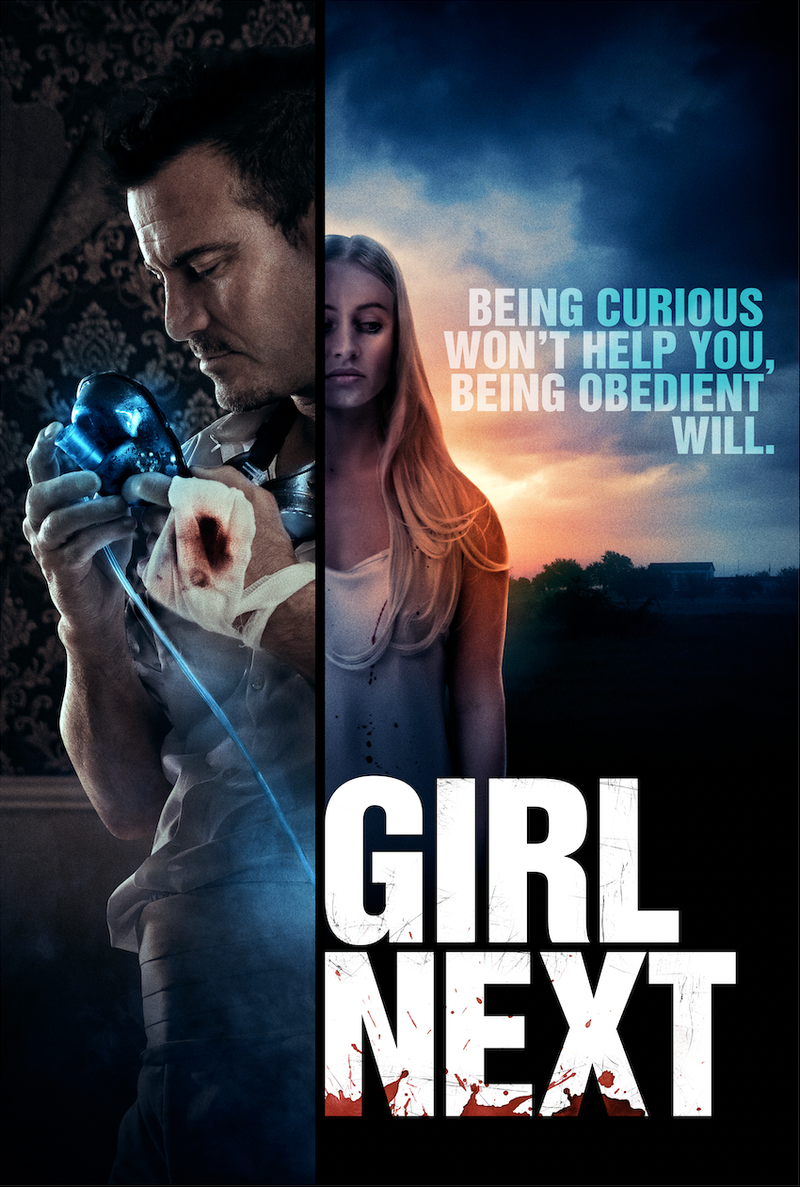 The notion that art imitates life allows for creativity to run rampant and rip reality to shreds, especially within the horror genre. While horror can be raw, cathartic entertainment for viewers, it can also be an enjoyably sinister playground for filmmakers who utilize their own passion, experiences and views as a means to create stories that simultaneously disgust and delight. Writer/co-producer Zeph E. Daniel and award-winning director Larry Wade Carrell apply a diabolically inventive and ruthlessly full-throttle approach to revenge with their latest film, Girl Next.

Widely known and loved for his work on the 1989 cult horror film Society, Zeph E. Daniel (previously named Woody Keith) co-wrote the satirical screenplay along with Rick Fry, whom he met at Hollywood Scriptwriting Institute, for one of the most impressive and comically gruesome body horror films to date. Daniel says, “Society was about things in our society that shouldn’t be there but are. It was a project that freaked me out... but that’s always the one you want to be writing”. The rich literally consume one another in a furiously flesh-mangling orgy that is a masterly piece of practical effects courtesy of Joji Tani (aka Screaming Mad George), who also worked with Daniel and director Brian Yuzna later on Bride of Re-Animator.

With an affinity for exploring concealed and menacing subject matter that many wish to turn a blind eye to, Daniel penned the screenplay for his latest film about the wicked underbelly of human trafficking – a timely story filled with violence, drugs and revenge. Daniel explains, “Horror films show us what we can’t look at or what we don’t want to remember or acknowledge. It makes it palpable and digestible for us. A lot of it is real; you just don’t see it." Girl Next follows a young and beautiful woman from the suburbs by the name of Lorian West (Lacey Cofran) who is kidnapped at the hands of a deranged couple. An evil doctor named Heinrich (Marcus Jean Pirae) drugs Lorian and takes her back to a remote Texas ranch where he uses torture methods to deconstruct young women’s personalities in order to break their spirit, forcing them to become compliant sex dolls called “SOPHIAs”. Once brutally brainwashed, the fabricated girls are sold into the sex trade. Drawing inspiration from real-life torture techniques, Daniel wrote the screenplay with MK-Ultra in mind, a top-secret CIA project lasting from 1953 to 1973 that used LSD for mind control methods and various forms of psychological torment – sometimes even verbal and sexual torture. Yet, despite Heinrich’s best efforts to control and destroy Lorian, her impenetrable resilience has something else in store for her captors and their clandestine operation.

The hallucinogenic properties of a drug used in the film called "Aqua Velva" allowed Carrell’s creativity to flex its mighty and morbid muscles. Despite a couple of psychedelic drug-induced scenes, the majority of the film is practical. CGI was mostly used only to enhance the unraveling of one’s sanity. As a result, special FX artist Kristi Boul had a plethora of pain to visually bring to life through prosthetics. There are scenes of a face being ripped to shreds, heads being bashed in, appendages cut off, and a sex machine with a large blade that will literally fuck its victims to death. All of these action sequences speak to the amount of gore on set. Carrell wanted the killer sex machine to have “a dirty, nasty and vintage look to it, as if anyone could build it.” This make-shift approach makes the device all the more terrifying, considering the plot. A self-proclaimed actor at heart, Carrell serves as the film’s director and editor, but also plays the corrupt sheriff in Girl Next, subjecting himself to Lorian’s hellbent revenge. Both the practical effects and screenplay are cohesive, working parts that contribute to the authenticity of the genre. Daniel says, “You can say things in horror that you can’t say under normal, everyday context. In horror movies, you can say things you otherwise may not be able to.” Similarly, in terms of practical effects, genre films like Girl Next allow make-up artists and prop designers to showcase their abilities by creating visuals that will sear into the minds of the viewer.

While Girl Next doesn’t shy away from violence and carnage, Carrell states, “There’s also a spiritual dimension included, as well as supernatural and violent elements. I love the way we explore drugs in the story because it gives me the chance to explore cool nightmare and dream sequences that were inspired by films such as Hellraiser, Hellraiser 2 and early Nightmare on Elm Street films – especially how they did long shots and used a reverse dolly zoom." David Lynch, Stanley Kubrick and Terry Gilliam were the primary directorial influences for Carrell. Before shooting, films like Blue Velvet and The Shining were played heavily to get into a relevant mental space. Heinrich’s character is a parallel to Frank Booth and a kaleidoscopic amalgamation of some of Carrell’s heroes, including Hunter S. Thompson, Gomez Addams, and Mads Mikkelsen’s version of Hannibal. Daniel and Carrell both raved about the actors’ talent. They specifically decided to take an alternative route to find their hero and villain by avoiding a casting director and instead opting for more of a hand-picked approach.

The vibe on set at Texas Republic Studios is friendly and upbeat despite the dark subject matter Girl Next addresses. Carrell and Daniel clearly share an appreciation for one another’s creativity and enjoy the opportunity to collaborate. Carrell’s passion and excitement for filmmaking radiate with each take and his emotional investment into his work is palpable.