Our favorite author, dreamweaver, visionary plus actor is BACK. 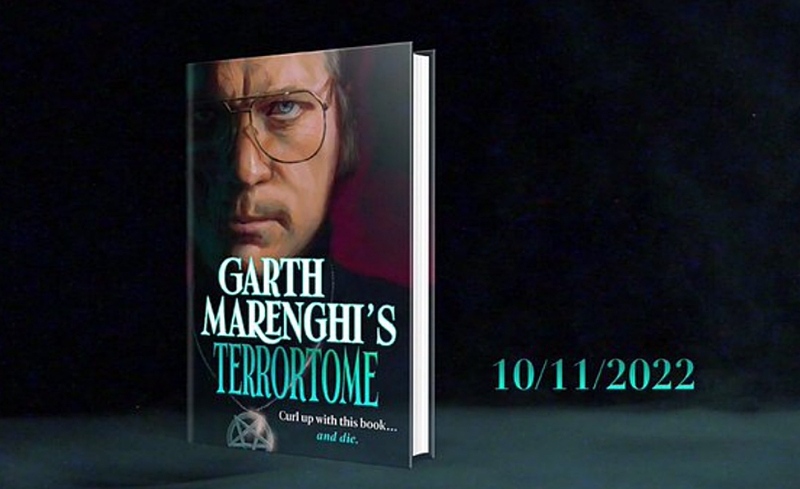 Please stand by for an important announcement from Garth Marenghi:

That's right: the brilliantly funny Matthew Holness is back in Garth Marenghi's dark, evil saddle with a brand-new novel called TerrorTome. What's TerrorTome about? I'm glad you asked! Here's a description from the novel's publisher (via comedy.co.uk):

"When horror writer Nick Steen gets sucked into a cursed typewriter by the terrifying Type-Face, Dark Lord of the Prolix, the hellish visions inside his head are unleashed for real. Forced to fight his escaping imagination - now leaking out of his own brain - Nick must defend the town of Stalkford from his own fictional horrors, including avascular-necrosis-obsessed serial killer Nelson Strain and Nick's dreaded throppleganger, the Dark Third.

"Can he and Roz, his frequently incorrect female editor, hunt down these incarnate denizens of Nick's rampaging imaginata before they destroy Stalkford, outer Stalkford and possibly slightly further?

Oh, yes, this is certainly the tone we all know and love from the UK's dearly-departed Garth Marenghi's Darkplace, an utterly bonkers (and ultimately too-niche-for-this-world) TV comedy revolving around a terrible horror author (Holness' Marenghi) who writes and directs his very own primetime TV series called Darkplace. It's a show-within-a-show thing, in other words, combining elements of horror, sci-fi, awful '80s primetime programming, and the vanity of big mouth authors.

Post-Marenghi, Holness' career took an interesting turn in 2018 when he wrote and directed Possum, one of the most skin-crawlingly terrifying horror films of the past few years (absolutely look into that if you've not seen it already). That film showed a wild new side of Holness' talents, but I couldn't help but wonder if he might not loop back around to Garth Marenghi one. Well, here we are, and I'm thrilled.

Nothing further to report at this time, but do plan to pick up your copy of TerrorTome when it hits stores in November.