Watch the brand new trailer and dive in as the filmmaker discusses his latest entry in the series. 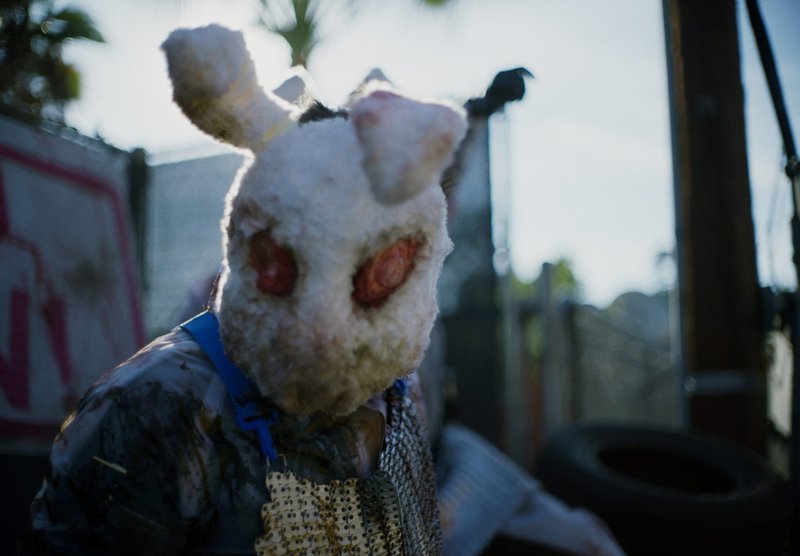 Sound the alarms. The Purge is back, and this time it doesn’t end with the coming of daylight. As showcased in the new trailer for Universal Pictures’ Blumhouse and Platinum Dunes collaboration, The Forever Purge, the annual Purge may be over, but that doesn’t mean that everyone has gotten their fill of violence. The fifth installment of The Purge film franchise follows a young Mexican couple, who after escaping from a drug cartel, find themselves on a Texas ranch with a group of lawless individuals who don’t need any government to tell them if they can Purge or not.

If the latest Purge looks a little different from what’s come before, it’s because director Everardo Gout has infused western genre aesthetics and daylight into the traditionally urban and after-hours franchise. James DeMonaco, the mastermind behind the franchise, returns as producer and screenwriter for this installment, which looks to expand the franchise while still delivering on the masks, bloodshed and pointed social commentary fans of the franchise have come to expect. Although The Forever Purge was originally suggested to be the final installment, and was made with the intention of putting everything on the table, horror fans know by now that nothing ever truly ends. And of course, America has proven to be too fertile a soil of inspiration for continuing Purge films.

Ahead of the premiere of the first trailer for The Forever Purge, FANGORIA spoke with Mexican filmmaker Everardo Gout, who brings his own style and social concerns to the franchise while delivering a much welcomed entry into the horror-western canon with a film he calls "the pinnacle" of Purge movies.

How does it feel to be directing the next installment of The Purge franchise?

It’s ever-after, like we see in the movies. I think it’s a fucking great joy ride. There are so many fun elements about it that I hope that people are ready to go to the cinemas because they will really enjoy it.

I’ve been a fan of the series since the first one and each installment has upped the ante. What can you tease audiences with about The Forever Purge?

It’s the tsunami of the Purge movies. To me it wasn’t about doing another Purge movie but the ‘last’ Purge movie. But I wouldn’t be surprised if James [DeMonaco] came up with a new idea and it’s no longer the last one [laughs]. But that’s how we approached it, as if this was going to be the last one in terms of scope, in terms of storytelling, and in terms of where the movie goes. And so we changed the rules, we broke them out, without eliminating the codes. Those we kept because we want to be in the Purge universe and we don’t want audiences to go, 'What? What? This isn’t the Purge!' But at the same time, we had a huge opportunity to turn it on its head. We made a lot of it in daytime, and shot it wider and with much more scope to tell the story and explore the characters. So that’s what’s very refreshing about this one.

I noticed in the trailer there’s an interesting western flair to this installment. Were there any films in the genre – western, horror, or both – that influenced your work on this film, or that you’d want to recommend to FANGORIA readers?

For sure. There are so many. Not even movies, but books, and paintings, and music that influenced me. But I’m a big fan of westerns. I used to watch westerns with my dad all the time. He’s now 91 and I still watch westerns with him all the time [laughs]. As for recommendations, The Proposition by John Hillcoat is an Australian western that’s an amazing movie. And in the horror element of it, Bone Tomahawk, also shot in daytime. It’s fucking scary as hell. But there are many, many more.

The Purge franchise has always leaned into politics and it’s pretty fascinating that the franchise has existed in three distinct American presidential terms. Are there any major societal concerns driving The Forever Purge?

I think in terms of the universe of The Purge, it’s not a secret that James [DeMonaco] always tries to have his say in the franchise. I think that’s what makes it an interesting franchise. It’s not just a bleak take on the world. It has something to say. But the most important thing is that it’s a thriller/horror joyride. You have a big piece of entertainment that, at the end of the day as you’re leaving the cinema, you’re not dumping it in the trashcan with the rest of your popcorn. You come home and it makes you think. And I think those are the best kinds of movies, when you have this sort of black mirror that you can see yourself in. And that goes along with the authenticity of the type of cast we brought in to this movie. I wanted it to feel as real as possible so that people could identify with the characters as much as possible. And that’s what takes you a long way. It’s not a movie that is trying to be preachy, or trying to tell you how to think, but telling you, ‘This is who we are. This is our world. Take it home, guys. Talk among yourselves and come together.’

In terms of that authenticity you mentioned, you have a largely Latino cast. Correct?

Yep. I brought on board my dear friend Tenoch Huerta [who] I had made a movie with that went to Cannes. He won his Mexican Academy Award for that movie. So this being my first Hollywood movie I thought I need to bring my guy [laughs]. The character was screaming for Tenoch to play him, and I refused to see any other actor until someone could prove to me that he wasn’t the right choice. So that was great to be able to do that.

There’s a great history of Mexican directors doing awesome Hollywood horror films. Is this a genre you’re excited about staying in and exploring further as your career goes on?

I’ve got a daughter and I talk about this all the time, but my idea is that you have to leave the planet in a better place than you received it from your parents. So I always choose my work in terms of what does the movie or project have to say, and if I can contribute to that or not. It’s never about the money and it’s never about the genre. I’ve done utopian universes with the series I did for NatGeo called Mars, and dystopian like The Forever Purge. It doesn’t matter. You find different tools. It’s very exciting that The Purge universe reaches a lot of people so you have a lot of tools, so you have to make sure that they’re satisfied. And then you find the thing for yourself. 'Can I say something intelligent about this? Do I have something to say, or not?' And if you do then you go to that genre. So if more interesting work comes in this type of universe, I’ll do it. If it’s something completely different, I’ll do it as well. The only thing is that I don’t like to repeat myself. I think you need to keep the challenges up, otherwise you become Hollywood fat and I don’t want that [laughs].

Is there anything else you else you want audiences to know about The Forever Purge before they check it out this summer?

This is the pinnacle of the Purge movies. Scope-wise, it’s tremendous. I think they’re in for a gut-grating, really visceral bloodbath that they’re going to enjoy!

The Forever Purge will hit theaters on July 2nd, 2021.