The director of IN FABRIC talks with Fango about his latest film – his oddest, funniest, and most relatable work yet. 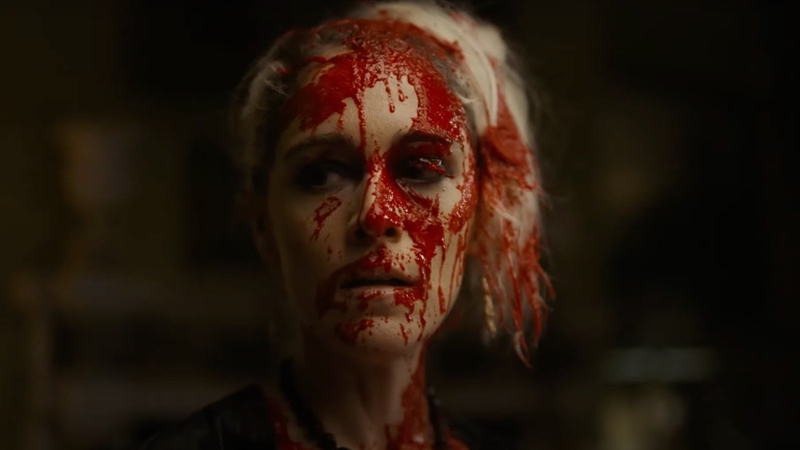 A new Peter Strickland film is such an exciting cinematic event that we at FANGORIA don’t particularly care if it’s horror or not. When a filmmaker is behind the giallo-flavored audiovisual experiences of Berberian Sound Studio, or the consumerist nightmare vignettes of In Fabric, you’d do well to show up for his somewhat out-of-genre works like The Duke of Burgundy and his newest film, Flux Gourmet.

What the films have in common is that they are complete worlds, increasingly unlike our own, each one delivering a reality separate from our own that nonetheless feels considered and bespoke down to the last detail. (Perhaps the closest current American analogue, for the uninitiated, would be the matter-of-fact, made-up technology seen in David Robert Mitchell’s It Follows or Under the Silver Lake.)

Through it all, the collective’s host and patron Jan Stevens (Gwendoline Christie) encourages, gives notes and attempts to steer the group’s creative choices (much to their leader’s consternation) while staving off increasingly unnerving harassment from another group she's rejected. As this drama unfolds, a hapless, helplessly flatulent journalist (Makis Papadimitriou) who's tasked with interviewing the group desperately struggles to not rip ass in front of his subjects.

Got all that? For the horror purists, rest assured Flux Gourmet does indeed dip into horror territory before its runtime is over, but by then its surprising, often brutally funny metaphors about artistic freedom, the symbiotic nature of fandom, and the sad fate of those doomed to document artistic talent will have already won you over.

FANGORIA was pleased to speak with Mr. Strickland about Flux Gourmet, which opens in limited release on Friday, June 24th. 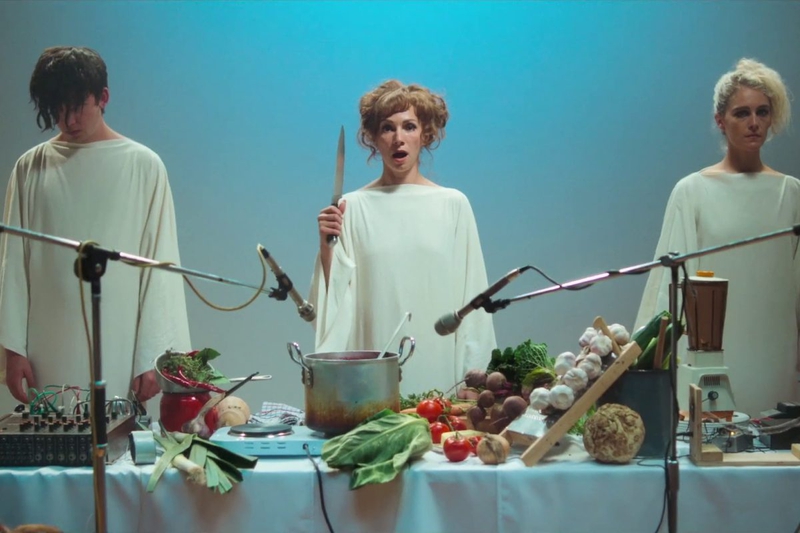 Discounting for the moment the meta detail of a journalist trying to not embarrass himself in front of creatives, what’s so relatable about each of your films is this frustrated feeling of compromise the characters endure. With Berberian Sound Studio, there’s a workplace/artistic compromise, with an artist taking a job that he feels is maybe beneath him. The Duke of Burgundy, as kinky and specific as it is, is ultimately about the compromises we make in trying to keep the person we love happy. And in Flux Gourmet the compromise is the central conflict: artists versus the people who foot the bill. I'm curious about that thread in your work.

My interest here was more about power than actual artistic compromise. (In the power struggle between the collective and Jan Stevens), Fatma's character actually doesn't really care about the specifics of Jan’s input. I wanted to look at egos, and deceits, and the way Elle (Mohamed's character) mythologizes herself by completely twisting her past. It's not the most sympathetic portrait of a bunch of artists.

But yes, that conflict between them very much concerns people making films, or music or art; that very tenuous relationship between the people funding you and the work.

I'm curious if the people who financed this film have a sense of humor about themselves. This is in some ways a film about them.

Yeah, I think there was a bit of an elephant in the room. We never really discussed that element of the film with financiers versus people making things. It was just a bit too uncomfortable, really.

I suppose at this point in your career, though, you've found the people that are rowing in the same direction as you, and it's not quite the friction that Elle might be feeling.

Well, there are arguments when you make a film. I think the thing for me was not to turn it into a one-sided, ‘This is what we have to put up with’ thing. I really tried to step back and look at everyone's perspective and be more like a football referee. It would be too easy to take the side of the artist. I wanted to look at what it must feel like to be the person saying 'no' to all these artists, showing the stress involved in that. That must be a very difficult job. Unless you're an asshole, nobody likes saying 'no' to people.

And a lot of people don't take rejection well, sadly. So we have the threat of these artists who are terrorizing the institute, just because they were rejected. 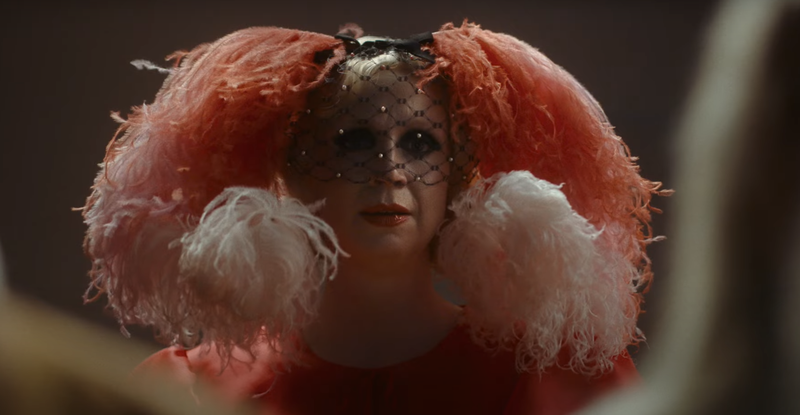 Well, what you see in the film is completely absurd. You associate that kind of thing with male hard rock performers, you don't associate it with these academic bands, but I liked the absurdity of it. It seemed that, again, it was highlighting something else. There was going to be some ejaculation shots. I liked the idea of the band being ejaculated on by their audience. It felt like there was a metaphor there.

The tones of your films are so specific to themselves, and not particularly naturalistic. How do you translate your intended tone into marching orders for such a disparate group? Is there a group meeting? Is there a lookbook? How do you get these folks all singing in the same key?

I think, after a certain amount of films, your body of work goes in your favor; they get into that register. There is a danger with that sometimes, such as when you want to do a different register, and it doesn't always help that they've seen the other films. But much of a tone is in the acting; that's the building blocks of it. I think the sound and other things come afterward, but if the acting's not there, then the tone just doesn't work.

Especially with Makis (who plays Stones, the journalist), that was a very key thing, because you're dealing with a subject (chronic flatulence) which is almost always done as comedy. Fair enough, why wouldn't it be? But I wanted to look at it more seriously. How to do that with dignity, how to pull it off, that was a key thing to finding the tone. Taking something which is classically frat-boy comedy, but giving it a very solemn treatment. Almost like Bresson's Diary of a Country Priest, with this priest who was terminally ill and had these mournful voiceovers detailing his thoughts.

At the same time, Dr. Glock (Richard Bremmer) seems to almost be delighting in Stones’ embarrassment.

That is a good point because there's being solemn, but then there's being earnest, which personally it's not to my taste. We were very in danger of going in that direction, so I think when we get to the diagnosis, when I wrote that, I thought ‘I've got to make it much more devious.’ It's a very tricky line to follow because if you're too devious, you're just laughing at the character, but you want to put the characters through something.

When I had that scene with the diagnosis, I spoke with Richard about X Factor, and Britain's Got Talent, all those talent shows. The way the presenters play the participants, and they've got the envelope, and they hold it for as long as they can, they milk it to death, and you can see that glint of sadism in their eyes. So I said to Richard, ‘just really enjoy playing him until Stones is just going to burst and start strangling you.’ That was a way for me to avoid being too earnest with that scene. 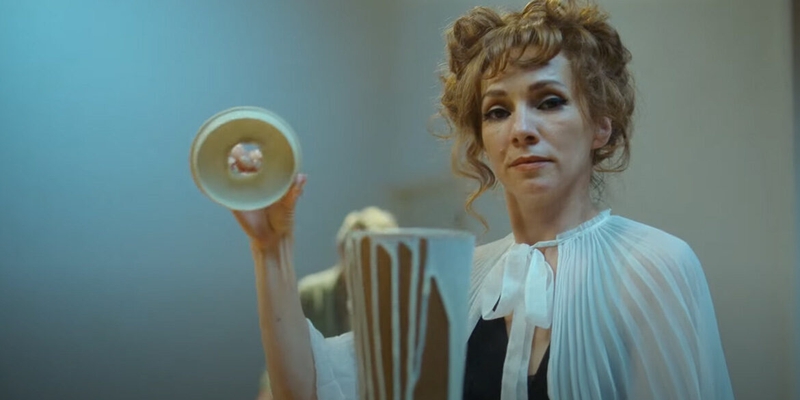 You have favorite actors, it seems. Fatma Mohamed is in all your films, and Gwendoline Christie is back after In Fabric. Does rehiring them make your job easier, because they know what you're after, or are these collaborators that you’re excited to explore new things with? Talk to me about returning to actors.

I think it's a mixture of things. There’s a shorthand, of course. But as a viewer, I always loved seeing a little troupe of actors who'd come back again and again. My favorite was John Waters and Divine. Bergman with Liv Ullmann. Fassbinder with Margit Carstensen or Hanna Schygulla. There was something really interesting about, ‘What are they going to play next? How are they going to do it?’

And I just think Fatma’s a great actor. No one else offers her roles; God knows why. I feel so lucky to have found someone so amazing. In this tiny theater in the middle of Transylvania, there she was. And on each film, it's very much about always trying to do something different from what we've done before.

This interview was edited for length and clarity.