A set visit report from The Gingold Files. 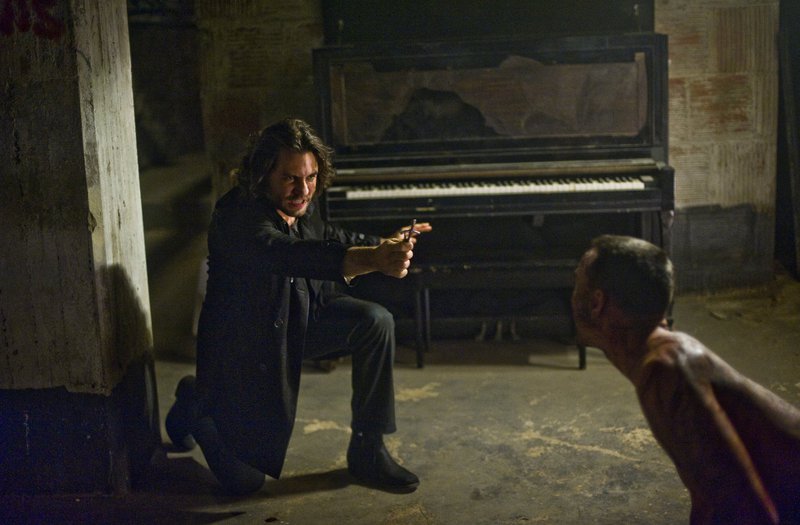 Editor's Note: This was originally published for FANGORIA on June 2, 2014, and we're proud to share it as part of The Gingold Files.

It’s a mid-July night when FANGORIA makes its way up to the Bronx to check out the set of Deliver Us from Evil, but the weather is anything but hellishly hot. Instead, it’s chilly and raining as the crew sets up to shoot an exterior scene—but first, we head into the bowels of the house location.

Descending into a basement hallway with very little headroom, it’s easy to get creeped out, especially when you get to the end of the corridor and enter a dank room festooned with assorted herbs, foodstuffs in jars and wines in bottles bearing handwritten labels and dated tags (some bearing legends like “No end in sight”), arranged on shelves and hanging from ceiling pipes. In the film, we’re told, this is part of the Alberghetti home, whose upstairs has already been filmed at a different location. Detective Ralph Sarchie (Eric Bana) and his partner Butler (Joel McHale) arrive here to investigate complaints of strange, inexplicable events—par for the course for Sarchie both in the film and real life.

Originally known as Beware the Night and based on Sarchie and Lisa Collier Cool’s 2001 book of the same title, Deliver Us from Evil is a fictionalized horror/drama about the man who spent a decade patrolling the 46th Precinct, one of the roughest parts of the Bronx, and whose religious faith led him to also protect the city’s residents as a self-styled demonologist. Directed by Scott Derrickson, who previously tackled possession in The Exorcism of Emily Rose, Deliver Us is a film he’s been involved with since before that one; when producer Jerry Bruckheimer acquired the rights to Sarchie’s tome, Derrickson and his writing partner Paul Harris Boardman were the first to get the adaptation assignment. The project went through a decade of further development with numerous other scribes before winding up back with Derrickson, around the time of his sleeper success with Sinister.

Back in the cellar, another part of the decor is a cabinet that, we’re informed, something dead falls out of in a key scene; a bloody mannequin is standing in for it right now. A little later, makeup FX artist Mike Marino fills us in on a few details. “Today, they filmed part of a sequence with a body rolling out of the cabinet,” says the veteran of Black Swan, Men in Black 3 and many other NYC genre films. “We’re going to do the next series of effects where the eyes move and crack open, and then the stomach cracks open and flies come out. We’re doing that on stage at Kaufman Astoria Studios, because we had to build an elevated floor so we can get underneath it and do all that stuff.”

The upper part of this house is being used as the home of Jimmy (Chris Coy), a soldier recently returned home from the Iraq War with an unholy presence infecting his soul. As a plastic-wrapped camera rolls, Coy, shirtless to show off Jimmy’s tattoos and wearing rubber “bare feet,” bursts out the front door and bolts off down the sidewalk through the rain, with McHale giving chase. During a brief break in the action, Coy says, “I just found out today, actually, that Jimmy is based on every psychopath that Sarchie ever ran into through his entire career.”

The actor also praises Derrickson: “Scott knows how to communicate with his actors really well. You run into a lot of directors who may be visionaries, but don’t know how to talk [to the cast]. He’s certainly not that guy, and he’s great to work with. This is the second movie I’ve done with him; on the first one, he stepped in halfway through and saved it from being a complete disaster,” though the actor remains coy on what film that is.

As far as body makeup goes, Coy seems to be getting off relatively easy. Marino reveals that this is one of his biggest shows ever, explaining, “Most of the characters either inflict wounds on themselves or go through an elaborate possession. One of the characters, Santino, whom Sean Harris [Prometheus] is playing, cuts symbols and Latin words all over his body. He wears so many [prosthetic] pieces, it takes seven and a half hours to do. One of the female characters, Jane Crenna [played by Olivia Horton], does the same thing, but not as excessively, and for Jimmy, we designed all his tattoos and he’s got these crazy fingernails; he’s supposed to be kind of like an animal, a feral guy scratching himself.”

When Derrickson sits down for an interview, he reveals that, beyond Sarchie’s own story, he found inspiration in a couple of older, disparate sources. “Certainly, The Night Stalker [was one],” he says. “That was my introduction to Gothic storytelling. It was the first [scary] thing I saw as a kid; I was too young to be seeing horror films. That was the first thing I remember me and all the other kids in elementary school always talking about. It’s that and a lot of love for the New York cop procedural, where it’s rooted in real detective work and has a lot of action, like The French Connection. I’m not comparing this to The French Connection, but that’s what was interesting to me about this: trying to put elements together that you don’t usually get.

“The emotional core,” he continues, “is that this really is a story about a character, and that’s not always true when it comes to genre films. This is about a particular guy, and he’s a hardcore cop—a lot of anger, he’s violent, he’s good at his job but that takes its toll, and he’s the least likely guy in the world to end up doing what he ends up doing. To take a guy like that and put him in a story that involves the paranormal and supernatural and possession and all that is just great.”

While the real Sarchie (who is on set in an advisory position) was inspired to plunge into the world of the occult by his staunch Christian faith, the screen Sarchie starts off as a skeptic who comes to accept and confront the supernatural when he becomes involved in a case with renegade priest Mendoza (Edgar Ramírez). Along the way, he indulges in some questionable behavior, and Bana says, “Not everything we see him do, we’re going to enjoy. But it’s a great challenge as an actor.”

Bana, whose first outright genre movie this is, responded to both the role as written and the director’s previous work. “In Scott’s films, the characters are very strong, and when I saw Sinister and Emily Rose, I was intrigued. I felt this script was in keeping with the strong characters at the center of those really interesting, scary stories. So [what attracted him] was Ralph, who really jumped off the page, and Scott’s previous work. I’m really excited about it. It’s potentially a lot of fun.”

The actor also appreciates that Deliver Us from Evil is shooting largely on Sarchie’s real-life former stamping grounds, and adds that claustrophobic locations like the aforementioned basement are contributing to the authenticity. “[Shooting in] tight spaces is really interesting. It just helps. You pare it down to the bare essentials, but you’re always going to have your A-camera operator and focus puller, your boom operator, one actor. The way that Scott Kevan [the cinematographer, whose credits include Cabin Fever, Death Race and Underworld: Awakening] is shooting this film, so much of it is very dark and done with flashlights. We sort of self-light ourselves through scenes; Scott will quite often be in there with a flashlight running bounce [cards] in the room while we’re in there. That stuff never distracts me; I enjoy having another job to do, like, ‘Is it possible for you to hit that bounce in the corner in this part of the scene?’ It doesn’t take me out of the moment, and that shooting style really adds to the experience.”

Deliver Us from Evil has been positioned square in the middle of a typically competitive summer, a midrange-budgeted production in the midst of gazillion-dollar wannabe blockbusters. Buoyed by strong advance buzz, Screen Gems is no doubt hoping that it will repeat the box-office victory of James Wan’s The Conjuring, 2013’s July sleeper, but Derrickson insists that that film’s success was not an influence when he was developing Deliver Us. “There was no heat on The Conjuring at that time,” he says. “Zero. Nobody knew what The Conjuring was when we started doing this. But I’m friends with James, and I asked him for an early screening, because there’s so much overlap between the movies—and I took some of that stuff out after I saw The Conjuring. It was like, ‘Oh, f**k, I can’t do that. I’ve gotta take that out. Did he read my script?’ [Laughs]

“I love The Conjuring—it’s a great movie—but this is very different,” Derrickson continues. “That is a movie whose clear, primary purpose is to scare you. This is…I almost hesitate to call it a horror film, to be honest. It’s such a character drama. In fact, tonally—and Jerry would hate that I would say this—but the only movie I’ve been able to think of to compare it to is The Grey, which is an action film, a horror film, a suspense film, but it’s really a drama, because it’s about these people in a suspenseful situation that gives way to bursts of action. I’m trying to make something that isn’t a down-the-center horror film, but is frightening at the same time. In fact, Bob Shaw, our production designer who just did The Wolf of Wall Street, made T-shirts for the art department, because I kept telling him that—they say, ‘It’s not a horror film…but it’s scary.’ ”