If Laurie Strode hasn't earned the honor by now, who has? 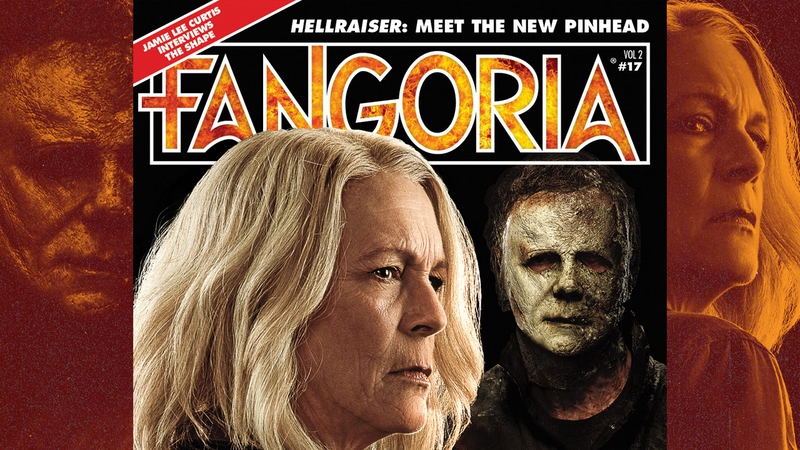 Jamie Lee Curtis was first glimpsed on the cover of FANGORIA back in 1981, relegated to the film strip in a curly blonde wig as the poster for Halloween II took up the main spot. She appeared again - back on the filmstrip - in 1998 for Halloween: H20. It's 2022, and it's time to give the queen her due.

We've done so on our subscriber cover featuring Halloween Ends. (Of course, where Laurie Strode goes, The Shape is not far behind, so rest assured ol' Michael is right behind her on this Fango First.)

For our subscriber cover story, horror icon Jamie Lee Curtis sits for a candid interview with the first man to play The Shape (Nick Castle), and the last man to play The Shape (James Jude Courtney). The trio discusses how Halloween began, how Halloween Ends, and the unusual bond the three of them share. (Eagle-eyed fans will note our tagline is a playful riff on that of the 1978 original; just felt right.)

Elsewhere in the mag we celebrate the Halloween franchise by recounting how Joe Bob Briggs was forced to reconsider his opinion of Halloween III earlier this year, and Stephen Graham Jones writes about the different genre moments that fed the flashpoint of the 1978 classic.

The magazine is also excited to feature a deep dive into the making of the brand new Hellraiser, as we hear from director David Bruckner and producer David Goyer on the unexpected new directions they’re taking the property. We also meet the new Pinhead herself, Jamie Clayton, and learn some of the film’s secrets from makeup FX artists Josh & Sierra Russell.

It being spooky season and all, this issue is PACKED with new release coverage:

Looking backward, we have Michael Gingold examining the fork in the road which had Joe Dante pondering Halloween III, and a revealing chat with the creator of British scare sensation Ghostwatch on its 30th anniversary. Bearded Skulls Makeup FX once more spoil the hell out of a recent gig, and kicking off her new, recurring space in the mag, Legends Makeup Academy co-founder Ve Neill goes deep about her epic work on the classic film Beetlejuice.

Believe it or not, there's more, but we'll save some for later. To get this historic cover, you MUST subscribe; it will not be sold in stores. Hit this link to subscribe, and if you're new to us, the code FINALGIRL will get you 25% off your subscription. This issue ships the first week of October.