Exploring Clothing As Costume And Armor In STUDENT BODY: Threads of Fear

You can't go back in time to give your teenage self some sage advice... but you can make a movie about it. 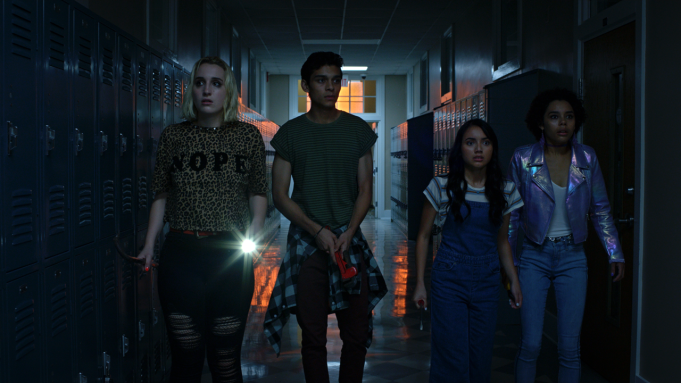 She wore a black Abercrombie & Fitch polo shirt with the collar popped. The jeans were American Eagle: dark wash, low rise, held up by a pink ribbon-style belt. Her brown hair had all the natural floof mine could never muster. Shoes were leather ballet flats from Bloomingdale’s; her wristlet, a Vera Bradley. She actually, really wore Chanel perfume. And she terrified the hell out of me.

“She” was any one of the popular girls I agonized over impressing in middle and high school during the early/ mid-2000s. But the devil was in the details, and the only brands I could afford were Aeropostale, Old Navy, and Payless, not their pricy upgrades. I couldn’t lean on labels or looks to create a cool identity, so my personality had to do the heavy lifting. I gave those girls all the power and left none for myself. They could smell my desperation. You can guess how well it went.

So from ages twelve to sixteen, I was afraid nearly every single day at school. I was afraid that I was, in fact, every bit as lame as my clothes, and that, like the lameness of my clothes, my personal lameness would never change. I was afraid I would never have any real friends, and I would always be on the outside. It was like my life took place in an audience, forever watching someone else’s rockin’ teen movie.

Many years later, I decided to reclaim the girl-centered coming-of-age movie from my former, disempowered self. The result is my debut feature, Student Body, a teen horror movie I wrote and directed. To me, the genre mashup is oxymoronic. I could have no more separated my constant fear in those years than I could have acquired hundreds of dollars to buy Abercrombie and Chanel. With this film, I sought to delve into the darkness of being a young woman: the anxiety of not knowing if your friends really are your friends, the suffocation of male authority figures demanding constant perfection, and the whirling carousel of trying to please both parties, at the expense of staying grounded within your true self. From the inception of the screenwriting process for Student Body, I knew that the characters’ wardrobes would be essential in telling this story. In my memory and on the page, high school was a place of fear, born of a (perceived) unworthy identity. Your identity is never more intertwined with your style than when you’re young.

In the Student Body script, I wanted to evoke an initial impression of each main character with quick but impactful visual brushstrokes. In the opening scene, the lead character Jane Shipley wears an ill-fitting school uniform, dusted with dirt from her walk through the woods to get to class. In the hallway, her impeccably-dressed childhood best friend Merritt, who wears large, purple lightning bolt earrings, picks out a leaf from Jane’s hair. She even points out a gross glob of something on Jane’s backpack– a dead insect, perhaps. I then specified other wardrobe-adjacent props on the page for the other main characters, like hot pink headphones for French, a neon orange gym bag for Nadia, and a vintage film camera with a bright green shoulder strap for Ellis. I wanted the audience to feel like they quickly “got” who each character was from these details. “Oh, Jane is the innocent outsider, Merritt is the princess, French is the class clown, Nadia is the hot-headed athlete, and Ellis is the rebel artist.” Each character begins with a “brand,” a way they present themselves to their peers and, on a meta-level, to the audience. As the story progresses, however, the characters shed that top layer, revealing the incongruencies and insecurities that lie beneath each character’s “brand.” In the midst of intensifying uncertainty and danger, their constructed personas unravel, laying bare their threads of fear.

This unraveling process was brought to life by my talented costume designer, Lauren Oppelt. While the initial impressions of the five main teens in their school uniforms were more specified in the script, their main looks were a blank slate. In the story, the group breaks into their school on a Friday night, wearing street clothes. I wanted these looks, which they would wear for the majority of the film, to be their iconic silhouettes. These teens were to become a new Breakfast Club for this generation. Lauren brought this goal to beautiful fruition and engineered her costume design to subtly externalize the emotional unspooling of the characters.

The main looks Lauren designed for Ellis involved multiple layers of clothing, the topmost being a cool, rebel-style jacket. As things get scarier within the school, Ellis sheds a layer– until he’s left with just a V-neck tee, echoing his vulnerable state. Likewise, Merritt begins the night with a shiny purple jacket, its reflective sheen evoking the mirrors she uses to inspect her complexion. But as chaos breaks out in the halls, her jacket is left behind, and she ends up in a sweaty, plain white tee. Her glitzy, glamorous veneer peels back, and she must contend with her anger and sadness underneath.

For French, Lauren created a graphic t-shirt featuring the poster art of a vintage horror B-movie. This shirt meta-heightens French’s persona as the funny guy of the group, given that he really is in a horror movie himself. When he ends up in just this shirt and a pair of kooky boxers, partying it up, we get the uncomfortable sense that he doesn’t know just how exposed he really is. Lauren also created a “punk rock” aesthetic for Nadia, featuring “tough” materials like rhinestones, fishnets, chunky black boots, and the word “NOPE” across her animal print shirt (a detail I truly love). Nadia wears this look as if it were her armor– until she swims with French in the school pool. In this scene, she leaves her “armor” by the poolside. She opens up to him, revealing her vulnerabilities and insecurities.

For the central character of Jane, Lauren chose a pair of cute overalls with a custom-stitched flower, making her seem both younger and more innocent than the others in the group. Jane’s journey, however, brings her to some very dark places. The juxtaposition between her girlish overalls and their eventual bloodstains represents her loss of innocence– and her transformation into someone darker. She becomes someone, like Merritt, who can’t stay neatly categorized as either “victim” or “villain.” Jane’s “brand” also unravels, revealing the hidden emotions within, shocking both herself and the audience.

Lauren crafted iconic silhouettes with all five teens that display how each character wants to be seen by others and peeks into the aspects that they don’t want others– or even themselves— to see. Underneath their tightly-sewn “brands”– Ellis as the rebel-artist, Merritt as the glam queen, French as the class clown, Nadia as the hard-ass, Jane as the innocent– are vulnerable kids. Angry kids. Scared kids. Their style is intertwined with their sense of identity. But really, what they’re wearing– it’s just a costume.

I wish I could tell my teenage self that those girls wearing their Abercrombie and Chanel costumes were probably scared too. They had an image to maintain, after all. Everyone was always looking at them, expecting a constant standard of coolness. I bet it was a lot of pressure.

I wish I could tell my teenage self that those clothing brands didn’t give those girls power. I did. I gave them the power I needed to give myself.

I wish I could tell my teenage self that those fears I had– the fear of inadequacy, the fear of being alone– that those threads run through everyone.

That’s why I made a movie about it.

More from Lee Ann Kurr at leeannkurr.com and on Instagram @laanwho

Student Body is now available, click below to stream: