"It's got more blood than all of my other films combined, probably." 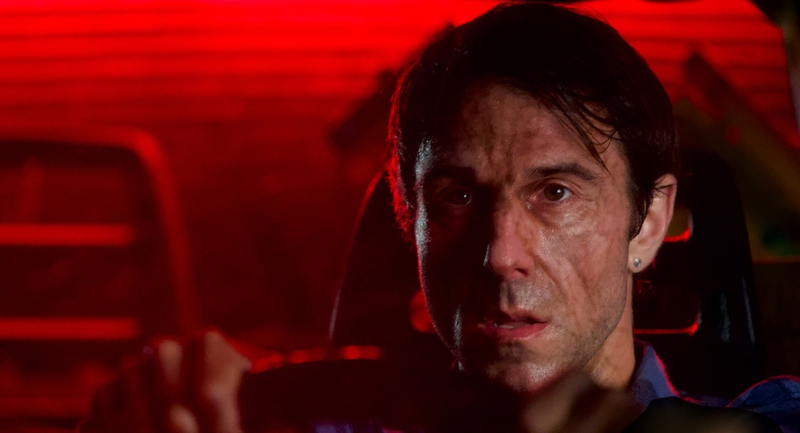 Having offered a very personal take on the vampire story with 1997's Habit and a variation on Frankenstein in 2019's Depraved, Larry Fessenden has at long last fulfilled his desire to round out a triptych of classic-monster homages. The independent horror auteur recently wrapped shooting on Blackout, a werewolf drama starring Alex Hurt (son of the late William; pictured above), Marshall Bell (Total Recall, A Nightmare on Elm Street 2), Joseph Castillo-Midyett, Rigo Garay, Cody Kostro, Marc Senter (The Lost, Old Man) and such past collaborators as Barbara Crampton (Jakob's Wife, We Are Still Here,You're Next), Joe Swanberg (You're Next), Depraved's Addison Timlin and James Le Gros and his regular player John Speredakos. The makeup effects were created by another pair of frequent team members, Brian Spears (pictured below with Hurt) and Peter Gerner. 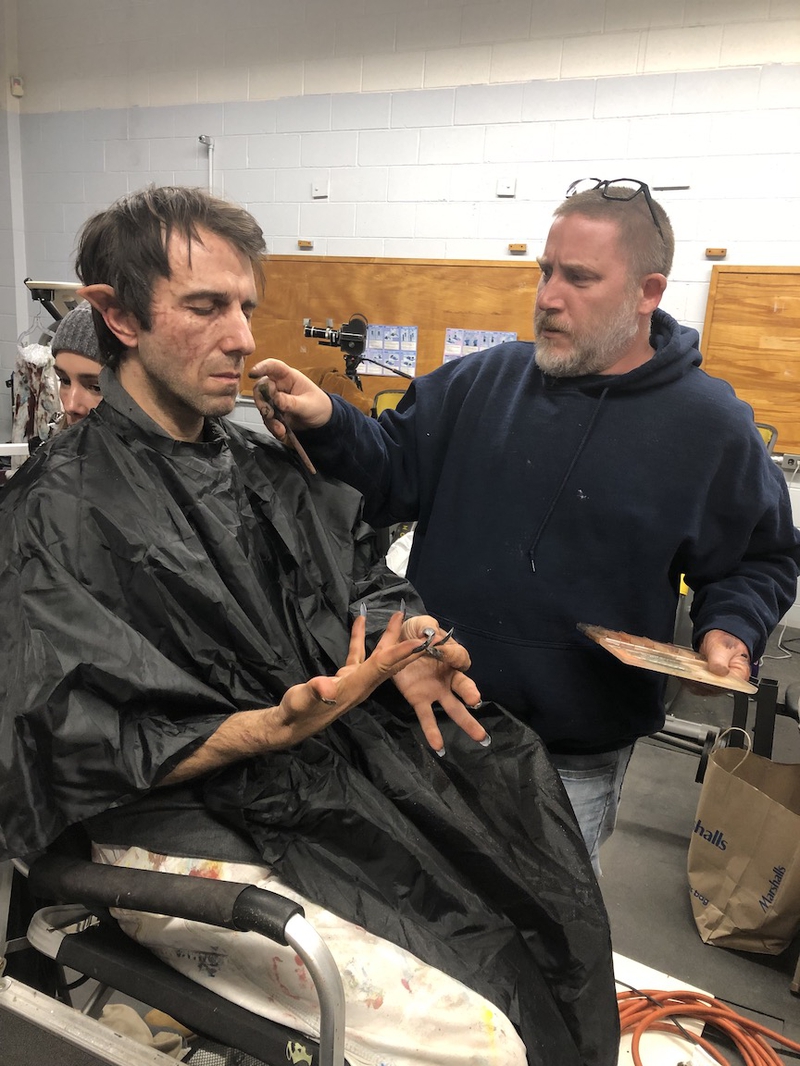 Shot on Fessenden's familiar turf of upstate New York, Blackout is an expansion of his Tales from Beyond the Pale audio drama of the same title. Set in the community of Talbot Falls (a shout-out to Lon Chaney Jr.'s Larry Talbot in the classic The Wolf Man), plagued by a series of mysterious murders. At the center of the story is Charley Barrett (Hurt), an artist suffering the titular episodes. "He usually paints landscapes, but his artwork has become very dark," Fessenden says. "They're sort of self-portraits, and they're blurred like Francis Bacon [paintings]. He goes through one day and seems to be in a real hurry, like he's trying to put his affairs in order. That night, he is heading to his friend Earl's, but on his way, he has an episode and drives off an incline, so he doesn't get there. Then the next day, he goes through another series of encounters, and the premise is, what would you do if you only had one more day? So he keeps trying to do the right thing, and say goodbye to people, and then the next night, he gets to Earl's…and that doesn't go well for anyone."

"It's about all the bad things you do when you can't remember," the filmmaker continues, noting that the title indicates, "Like all of my movies, it's sort of about alcoholism, and that weird state where you can't recall what happened. It's also, hopefully, thematically deeper than that; it's about our pasts and our histories, and of course, it's about a father relationship. He's haunted by his dad, so it's all my usual themes."

There's a touch of mystery to what Charley is going through, Hurt notes. "He doesn't know if he's a werewolf or not, so he's wrestling with a lot of feelings of grief and other things that have to do with alcoholism and addiction. He's wondering if that's what's coming out in these blackouts he's having, or if he's actually turning into an evil creature, this monster that's committing violent acts.

"And if he is," Hurt continues, "he starts out hating the fact that he's a werewolf, and then his journey is that he actually starts to accept it and use it. Larry is really pulling from so many different, beautiful sources for this film."

Lest this sound like a kinder, gentler approach to lycanthropy, Fessenden notes, "It's got more blood than all of my other films combined, probably. I don't know if it comes from a place of anger, or maybe that's just what the werewolf story is." Elaborating on the anger part, he explains, "I'm often responding to the events of the day, so Blackout is about a community that's divided, and scapegoating the wrong people. My theme frequently is, there's a real monster out there, but we're always arguing with each other.

"I'm also very influenced by the Marvel comic Werewolf by Night, and especially one of the issues drawn by Mike Ploog. Almost every image there is iconic to me. Now, I'm not saying we're going to achieve exactly that, but it was such a huge inspiration, that particular werewolf."

While keeping Marvel's wolfman in mind, Spears adds that he and Gerner also looked back even further when conceiving their makeup. "We knew this would be a smaller movie, so we wouldn't be able to do a Howling or American Werewolf in London," he says. "So we wanted to go back to the old-school Universal days and create a less elaborate werewolf, but still have it be very impactful. It's very Lon Chaney Jr.-ish. Larry's got more of that classic Universal vibe in this movie than anything of the present, so we're going back to that as well. We're basically just ripping off [legendary Universal makeup artist] Jack Pierce, if we're going to be totally honest!"

The actor wearing their prosthetics also contributed to the lycanthropic look, Spears says. "Alex changed the makeup considerably. We were going to go with a lot more fur, a lot more hair all over him, and then he came in completely jacked and ripped. We were going to make a full body suit for him, but we scaled back mainly based on Alex's performance. When he's wolfing out and doing these shakes he's been doing, and contorting his neck and body, if you put hair on that, you lose all that definition and detail."

Based on what Fango witnessed during a visit to the movie's set, monster fans are not going to be disappointed. Look for much more on Blackout in the pages of a future issue!