Exclusive Interview: Yudai Yamaguchi And Tak Sakaguchi’s DEADBALL And Other WEAPONs, Part One 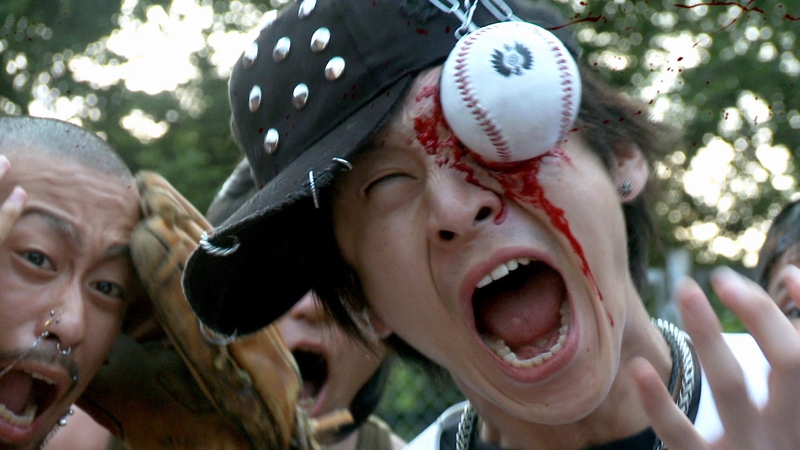 Editor's Note: This was originally published for FANGORIA on July 15, 2011, and we're proud to share it as part of The Gingold Files.

In 2000, Yudai Yamaguchi and Tak Sakaguchi helped jumpstart a new wave in over-the-top Japanese genre cinema as co-scripter and star, respectively, of Ryuhei Kitamura’s sword-and-zombie extravaganza Versus. Three years later, Yamaguchi cast Sakaguchi in the lead of his outrageous sports actioner Battlefield Baseball. This year, the duo have two movies blowing minds and other body parts on the festival circuit—Deadball, a variation on Baseball, and Yakuza Weapon (reviewed here)—and discussed them with Fango.

Speaking at the just-concluded New York Asian Film Festival about the films, both of which are also playing Montreal’s Fantasia, Yamaguchi says that Deadball (pictured above) is neither a sequel nor a specific remake of Baseball, but his attempt to put his original vision for that film on screen. “Battlefield Baseball was based on an original manga by Man Gataro, but it fell into the genre of manga for young boys in Japan,” he explains. “So there were issues of ratings with the film, and there’s a baseball murder I really wanted to do as a true splatter scene, but because of what the original work was and the age group it was targeting, we really couldn’t—that whole scene got cut and changed around. So it became a sort of twist where it’s supposed to be death by baseball, but they don’t actually die.

“Some people enjoyed it and thought that was interesting,” he continues, “and I appreciate that response, but I always had the frustration of wanting to do that scene the way a splatter film normally would, and that feeling has lingered. So when Yoshinori Chiba [one of Baseball’s executive producers] started Sushi Typhoon and we got into a discussion of what kind of film we wanted to make, that was an idea that came back: death by baseball, let’s do it as a splatter film, but not as a sequel. We switched gears; it’s not for the same audience, not for the same taste, necessarily.”

The first death by baseball in Deadball is indeed splattery and spectacular—and tragic. Sakaguchi stars as Jubei Yakyu (the same role he played in Baseball…but different), who as a teenager accidentally kills his father with his super-powered “fireball pitch” in front of his younger brother. Swearing off the game, he instead directs his violent energies into a vigilante spree that lands him in the Pterodactyl Juvenile Reformatory, where only the worst cases go. There, he’s dragooned into joining the facility’s team, and they can use him: Their big upcoming game is against the Black Dahlias, an all-female, all-deadly squad of killers. Much bloodshedding on the field ensues.

Other bodily…products are part of Deadball’s extreme brand of shock comedy; messy cavity searches are routine at Pterodactyl, and the inmates are forced to eat vomit for breakfast every morning. Even for Sushi Typhoon, the company that has given us Mutant Girls Squad, Alien vs. Ninja et al., Deadball really pushes the boundaries to the breaking point—and Yamaguchi laughs and says “Thank you” when he hears this. “We had on special effects [Sushi Typhoon regular] Yoshihiro Nishimura, who of course is famous for doing films like Tokyo Gore Police, and he and his team are real experts on the different ways you can completely destroy the human body,” the director notes. “But it’s not interesting to just do something we’ve already seen, so we started at the point of saying, ‘What’s something that’s never been done before?’ ”

Something that has been done before in youth exploitation pictures is casting overage actors as teenagers—but perhaps not to the extreme of Deadball, with 35-year-old Sakaguchi playing 17-year-old Jubei. “Of course, since he was Jubei in Battlefield Baseball, I felt he should be in this film too,” Yamaguchi says. “And also, he’s the actor who gets me the best, so regardless of his age, I really wanted him for this movie.”

“There’s no way I can pass for a teenager,” Sakaguchi admits, “but I did put in some effort into making the character younger. But the way the part was written, he’s really sort of grown-up and mature—he’s smoking through the whole film, for example.”

And if you think Sakaguchi’s age-inappropriate casting is unusual, consider this: Jubei’s roommate at Pterodactyl, a diminutive 16-year-old boy named Shinosuke, was portrayed by 29-year-old actress Mari Hoshino. “Originally, I was thinking about casting guys who were the actual age of the characters,” Yamaguchi recalls. “But when we got down to it, it’s sort of boring to use the obvious actors. I’ve always been interested in surprising, interesting, unique casting that makes people say, ‘Oh, why is he here? Why is she cast in this role?’ That’s a technique I’ve always been interested in. Mari Hoshino is known in Japan as a very straightforward actress, almost an ingénue. She has never done a movie like this before. And so the reaction in Japan is, ‘Why in the world is she in this movie?’ And that’s something I definitely was aiming for.”

Sakaguchi recalls that Hoshino’s experience was an assist for him on Deadball. “She’s a terrific actress,” he says, “and I went into shooting Deadball straight after finishing Yakuza Weapon, so I was really, really fatigued and sometimes I would mess up my lines. But she would kindly say the lines I had forgotten, and throw them in there.”

Deadball is rife with references to other films both in and out of the genre: The title logo is the same font employed by the Evil Dead films, a syringe of green glowing fluid à la Re-Animator makes an appearance and a character called “Avatar” wears 3D glasses and transforms into a Na’vi. So Shinosuke’s short haircut and owlish round glasses are clearly supposed to recall a certain boy wizard who’s been dominating movie screens for the past decade, right? Yamaguchi laughs at the suggestion. “This is the first time someone’s said that! I sure wish you were there to point that out earlier. I wasn’t thinking at all about Harry Potter, but I should have made that joke. We missed our chance, because Harry Potter’s over now.”

Not all of Deadball’s cast had Sakaguchi and Hoshino’s experience, including the girls portraying the vicious Black Dahlia team. “Those were actually not actors, but professional dancers. They used to be part of a group called Man-Eater; they’ve broken up since, but they were an erotic dance performance troupe. As far as the rest of the cast, we have a lot of people I’ve worked with in the past, where I just thought their acting was interesting or they’ve got really intriguing faces. Even for the small parts, I did a bunch of auditions and got together a group of people with a strong sense of character.”

(Thanks to Marc Walkow, Grady Hendrix and Chisato Uno.)