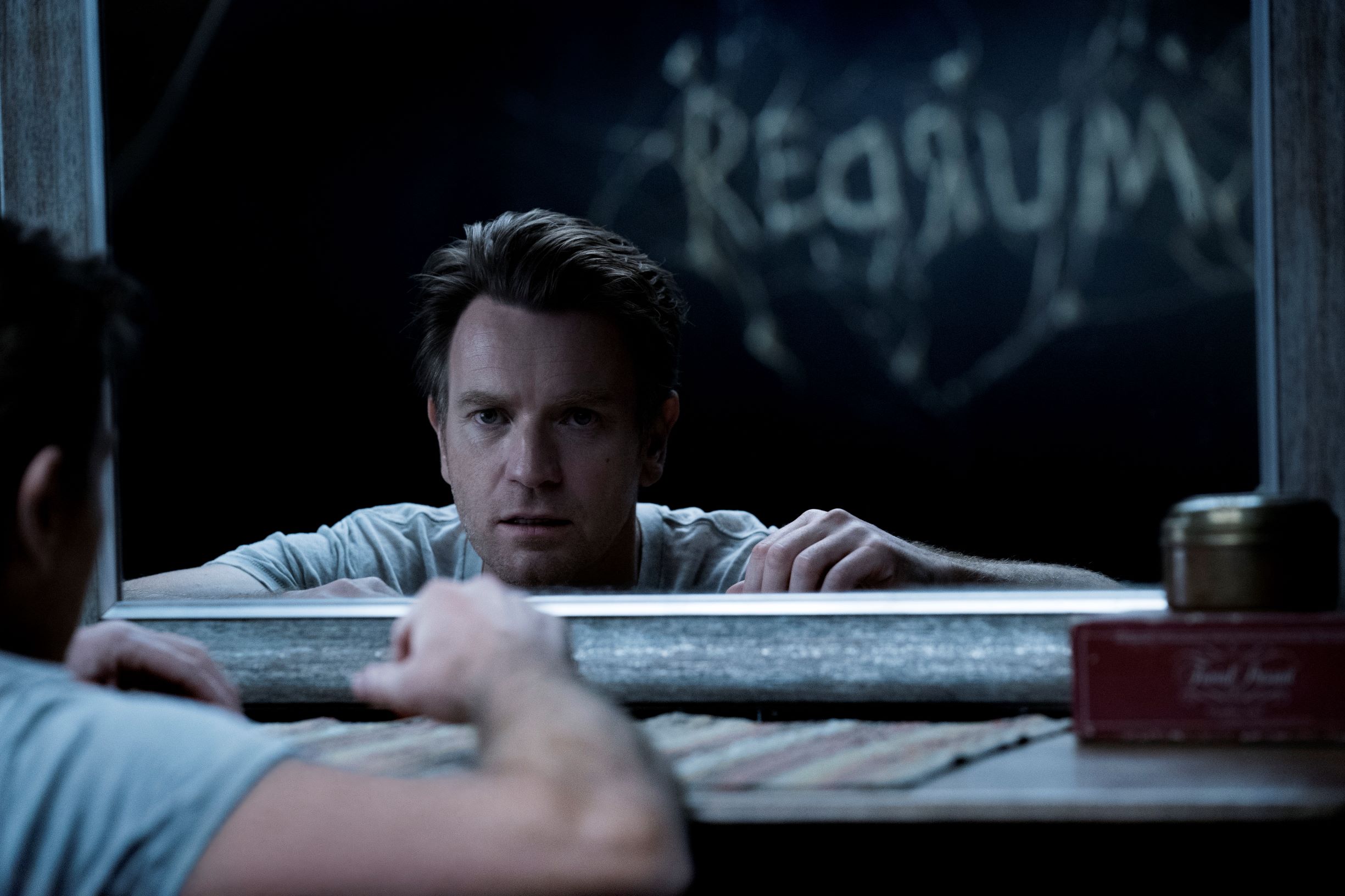 Part I: Casting the Film and Restaging ‘The Shining’

This Friday, Nov. 8th, Doctor Sleep opens as the culmination of a great challenge for writer/director Mike Flanagan: Creating a film that lives up to its predecessor, Stanley Kubrick’s classic The Shining, while standing as its own movie and a compelling adaptation of Stephen King’s 2013 novel. He has succeeded splendidly, and below is the first part of an exclusive interview with Flanagan.

‍Doctor Sleep stars Ewan McGregor as Dan Torrance, the little boy from The Shining now grown up and struggling with alcohol addiction and echoes of his frightening childhood. While repressing the demons of his past, he retains the ability to “shine” and psychically connect with others — one in particular. He forges a connection with a girl named Abra Stone (Kyliegh Curran), and must protect her from a kind of psychic vampire named Rose the Hat (Rebecca Ferguson). She leads a group called the True Knot, who feed on the energy given off by those with the “shining” gift, and the conflict leads Dan back to the Overlook Hotel, site of his past traumas. His mother Wendy (Alex Essoe) and Overlook chef Dick Hallorann (Carl Lumbly) also make appearances, and landing the right actors was crucial for both the new roles and the old ones …

FANGORIA: What went into the casting process for Dan, Rose and Abra?

MIKE FLANAGAN: Casting a character as iconic as Dan Torrance is no small thing. I met with a lot of wonderful actors about the part, and the thing is, when you talk about Doctor Sleep and Dan Torrance, you can’t do it without talking a lot about The Shining; it’s inevitable. What struck me about Ewan McGregor was that we did talk about The Shining for the first couple of minutes, but then for the next hour, we talked about Dan as an adult, and as a struggling addict. That made me feel like Ewan would be the perfect person to play this part. He intuitively understood what was so important about how we approached the movie, which was that The Shining is critical—it absolutely shapes all of the people and the events in this film—but this is also a story that is far removed from that, both in time and in space, and Dan is an adult dealing with the same kind of addiction and anger his father did; that’s the heart of it. The past is important, but it’s not the point, and Ewan understood that about Dan.

Rebecca Ferguson just is Rose the Hat; it’s kind of amazing. When I read the book, I felt Rose was perhaps the best antagonist Stephen King had come up with in 20 years; I just loved her on the page. And you need a character with the charisma Rose has in order to understand how people follow her. She’s a cult leader, and she does some truly, unbelievably horrible things in the story. To go up against a character as established in the popular consciousness as Dan Torrance, you need an antagonist who’s up to the task, and Rose, as written, is that. And it was clear the first time I spoke with Rebecca that she had the gravitas and the charisma and the humor. I looked at her and thought that even when Rose was doing things I couldn’t imagine having to endure watching, I wouldn’t be able to look away from her. She commands that kind of attention. She has made the role iconic in her own way; I can’t wait to see everyone at Comic-Con dressed like Rebecca as Rose next year [laughs].

The final piece of the trinity that makes up this movie, and the most important, is Kyliegh Curran as Abra. Kyliegh kind of came out of nowhere. You hope the industry works a certain way when it comes to discovering talent, and we had looked at over 900 girls to play Abra, all of whom were terrific, some of whom I’d worked with more than once in the past and many of whom had big movies and TV credits under their belts. Kyliegh had not really done anything; her biggest credit was a theater production. She lived about 15 minutes from our offices in Atlanta; she was a local submission, without the weight of a big agency behind her. And her tape just did what you hope tapes of really talented, unknown actors will do—it just rose up the ranks. When we narrowed it down to our top five candidates, we had four very experienced and wonderful young actors, and this complete unknown named Kyliegh who lived just a few minutes away from the office.

So we brought her in for a chemistry read with Ewan, and she sat down and did a scene with him. Then she got up and left, and all of us in the room had to pick our jaws up off the floor and said, “That’s her.” She shines; it’s hard to explain what it is about her, but she completely inhabits that character. It’s not every day as a filmmaker that you get to watch a star be born, and it’s been amazing to have the opportunity to do that.

FANGORIA: Was there a particular amount of attention paid to casting Wendy Torrance and Dick Hallorann?

FLANAGAN: Oh yes. That was one of the first major stressors for me. Once the script was finished, and I knew we’d need Wendy and Dick back, how do you find actors who can step into roles that are so well-known, people find them familiar who aren’t even familiar with The Shining? Performances as iconic as Shelley Duvall and Scatman Crothers—to what extent are we trying to imitate those performances or trying to do something new? It was a very difficult balance to spike, finding actors who would remind us of those performances, who would have similar notes in their appearances and mannerisms and the way they approached the characters, while still taking the characters in directions they didn’t go in The Shining. Wendy and Dick are different in Doctor Sleep, especially Wendy, because she’s been through so much, and the book and movie pick her up after this harrowing experience. She’s not quite the same woman. So how would an actor honor our memory of Shelley Duvall’s performance and then carry it forward in a different direction than we’ve seen it go before?

What we ended up with, with Alex Essoe and Carl Lumbly, are two phenomenal performances that evoke echoes of those classic performances but still do their own thing, and create their own characters. And that, in the same way Ewan approached his part, is indicative of our philosophy for Doctor Sleep as a whole. There are moments when you watch Alex in particular, where she pitches her voice and her posture in a way that is eerie in how much it reminds you of Shelley Duvall. But it’s only reminding you of her; it’s not an imitation. It’s a very delicate balance that Alex strikes; they both do.

FANGORIA: Can you talk about which scenes from The Shining you restaged for your film?

FLANAGAN: There are quite a bit, actually. Dan flashes back to the events at the Overlook several times, especially early in the film. One shot we were able to recreate was that incredible tracking shot of Danny on the Big Wheel, winding around the second-story hallway and landing in front of Room 237. That was an astonishing day on set, with the technology that made that shot possible. Kubrick’s use of Steadicam was revolutionary at the time he did it, and for us, even four decades later, it was still very technically challenging.

It was at moments like that, though, when I felt I was getting a unique kind of cinematic education. I don’t know if I could ever experience anything like this again, because there were a number of times when we were actively trying to recreate shots or entire scenes from the Kubrick film. I got to answer a bunch of questions forensically, almost like I was taking a production class from Kubrick himself, and I know what would have happened if he had moved his lens three feet to the right for a certain shot, you know? I know exactly why he planted the lens at the center of the stairs for this moment, and the actor over here off their mark, and why he chose to break continuity there, because you get a much more satisfying frame.

I know all that because I was able to try it, and it was incredible to spend all this energy reframing, as close as we possibly could, the same shot he had done—and then, just before we rolled, move through the shot a little bit, shift the camera and see what happened. Not because we wanted to change it, since we could always put it back, but just because I wanted to understand the various circumstances that led to his decision to plant that camera right there at that moment. It was fascinating; it was a completely unique educational experience.