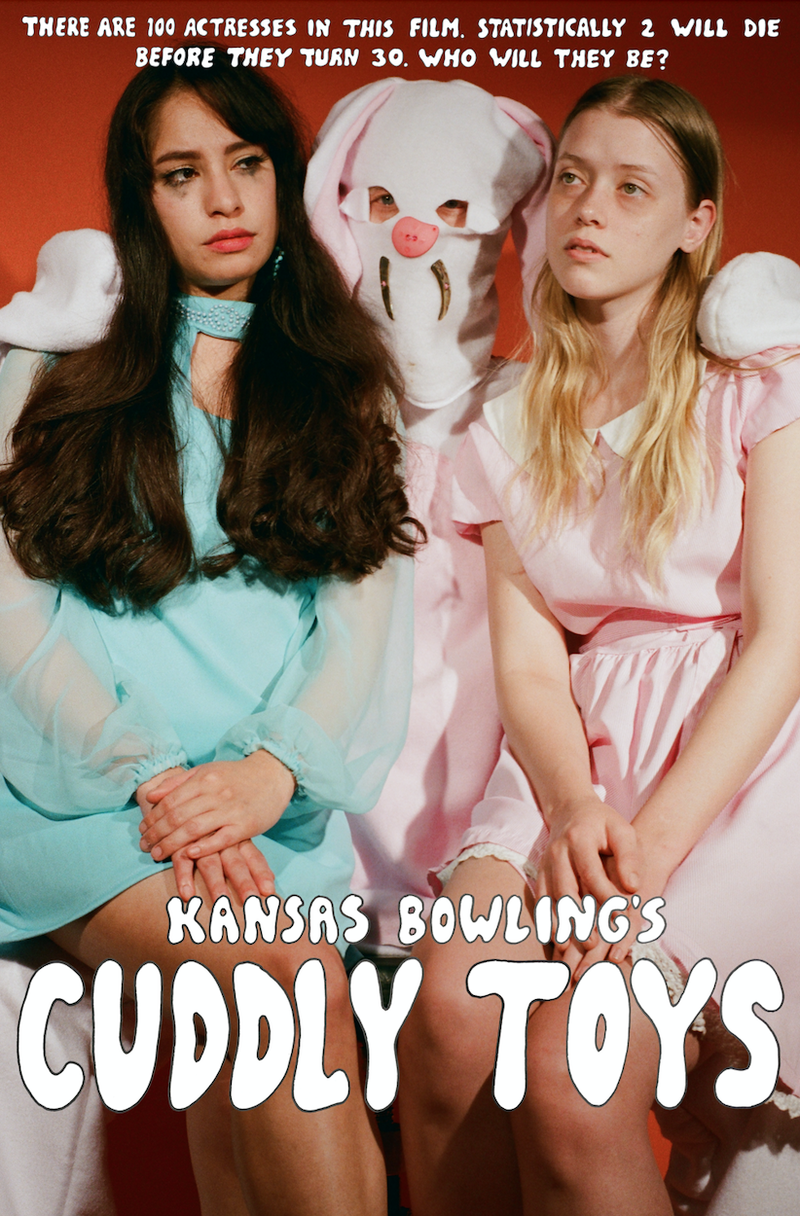 The director discusses the bizarre, the gory, and the traumatic secrets behind the innocence of girlhood.

Kansas Bowling's new film Cuddly Toys is inspired by 1960s Italian shockumentaries, a teenage rock musical, and the real-life horrors of girls entering adulthood. The movie is narrated à la Twilight Zone, introducing each vignette as if talking to a parental audience. It covers the generality that two out of 100 girls are going to have a tragic ending. It's not a feminist anthem, but an unlocked vault to the carnal, the psychological, the explicit, and the revolting aspects of the feminine experience. Cuddly Toys takes viewers to the dark depths of girlhood with the extreme stories of teenage angst, rape, and gore.

Cuddly Toys is named after The Monkees' song for its similar theme of naughtiness, and the female relationships and behaviors hidden from parental awareness. We discuss the violent Mondo films, Orson Welles, and the cinematic integrity of filming on 16mm. Cuddly Toys unmasks the pastel innocence to reveal a bold film that will challenge what you know.

FANGORIA talked to the screenwriter, director, producer, and actress on the telephone about her second feature film, which premiered this week.

I was doing a little bit of research, and a few years ago, in an interview, you described this film as a cross between Bye Bye Birdie and Mondo Cane and Faces of Death. I think it's awesome because those are completely different subjects and genres in film. Did those movies continue to be of inspiration for Cuddly Toys?

Yeah, that still sounds pretty accurate. I actually did the movie in the style of old Mondo movies because it's a genre that I really like, and it is sort of a forgotten genre. I made a modern-day Mondo movie. The whole Mondo genre is sort of just exploitive documentaries, which aren't always exactly the most truthful. [There's] a lot of fake footage, but mixed with real footage, and Faces of Death is, you know, one of my favorite ones of those. It's one of the most iconic ones probably. Mondo Cane was the one that started it all. Then there's Mondo Hollywood, Women of the World, and a bunch of them.

How did those tie in with Bye Bye Birdie? Can you explain a little bit more about that?

Cuddly Toys is a pseudo-documentary about the horrors of being a young girl. I play a professor in the movie, and I talk to the audience as if they are parents, and I'm warning them of what their daughters are doing without their knowledge. In a sense, it's a horror movie if, you know, you view it through the eyes of a parent. It's just about kids doing really bad things and being treated badly. 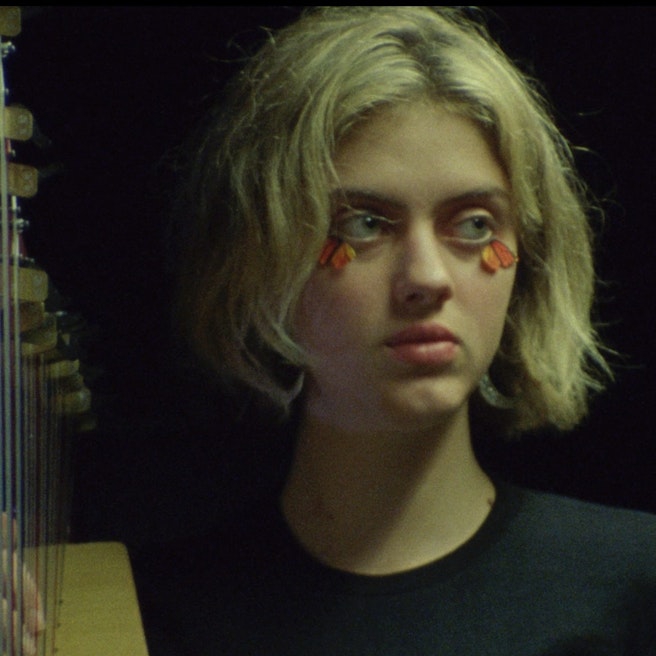 It reminds me of The Twilight Zone and how there's always a narrator. Plus, I think it gives a creepier aspect because there's someone telling you the story, and then the camera will immediately go into the story itself.

Exactly, that's kind of how it's set up. I introduce the segments of the film like Rod Serling in Twilight Zone.

How would you describe it? You said it's about girls, the aspects of [girlhood] and how parents are dealing with it. What kind of complications or issues are you trying to discuss?

It's just about being a girl, and how there are some things that are really hard about being a girl, and there are some things that are a lot easier. It's just about trying to get across an experience that isn't always accurately portrayed in films, but it's definitely focusing on more of the negative, which brings it into the horror [aspect]. It's not a typical horror movie, but there's just some stuff in it that makes people cringe, just depending on how you look at it.

Were there any challenges that you had to overcome while working on Cuddly Toys that you didn't have prior to this film.

I made B.C. Butcher before, and this was a lot different, because that one I had shot for eight days straight, I think. This one I shot all over the country with over 100 actors in like a bunch of different days all pieced together. I shot it in L.A., New York, Las Vegas, Mexico City, Philadelphia, Maryland, just all over the place, and the cast was a lot larger. The way the film is structured is it's a bunch of small vignettes all strung together, so it's a bunch of different scenes. It was just a very different shooting experience than having a one-site cast and shooting with them every day. We were shooting with different people each time we filmed.

Wow, that's very interesting. It kind of takes me back to Mondo Cane, where we get to see little glimpses and pieces from all over the world rather than just focusing on a single place and location.

Yeah, I wanted it to be as close to the old Mondo movies as possible and the Women of the World.

Are there any films besides Mondo Cane or Bye Bye Birdie, and any other directors that you see as inspiration for you to succeed in your work and to try other new things?

My favorite movie ever is F for Fake – it's an Orson Welles movie, and Cuddly Toys was also really heavily inspired by that, especially the editing. F for Fake was edited by two girls [Marie-Sophie Dubus and Dominique Engerer], and I feel like there's a very feminine editing style. Agnes Varda, too, and with the movies that she edits herself. I really relate to, so F for Fake, and her, and how I edited Cuddly Toys, I feel like they're all similar. Editing was a really big deal for this movie. It's hard to explain without people seeing the movie, but once they've seen the movie, they'll be like, 'oh yeah, that is very heavy on the editing.'

You've also directed a few music videos and you've actually acted in some horror films. Were you always interested in acting, or did filmmaking [and] screenwriting interest you first?

I never actually wanted to be an actress, but people just started asking me to act in films a lot. Once I started acting in one thing, I got another role. It's not really a focus of mine. I don't seek out acting roles, but if one is presented to me, I'll do it because it's really fun. It's fun to be part of a film without having to stress about it [laughs] like having every role on set. You know, I really love the horror genre, so I have a lot of respect for it. I like to be a part of it in any sort of capacity. I just acted in a horror movie in Alabama called Third Saturday in October, and I recently acted in a movie called Psycho Ape, which is out right now. I'm about to act in a horror movie by the guys who run Vinegar Syndrome and Massacre Video. I just love horror movies.

So, you kind of submerge yourself in all aspects of it, whether its acting, directing, behind the scenes, or in front of the camera.

Yeah, but I'm definitely a writer and filmmaker first.

Something that really intrigues me about you and your career is that you like to shoot on actual film. It's not digital, its actual film. For B.C. Butcher you shot on 16mm, was that also the case for Cuddly Toys?

Yeah, the whole film is shot on 16mm. A lot of it I shot myself too. There were three cinematographers throughout the whole film and I was one of them.

Most of all, I just love how it looks, but it's also a really fun process, and there are different ways you can experiment with it. There are parts in Cuddly Toys where I had to hand scratch some stuff out, and the process is just really exciting. Not seeing what you're getting and then getting it back, and it always looks way better than real life. The colors are just so vibrant, and there's a lot more you can do— like color correcting the film, too. You can bring out more colors and not have it look over the top. And, it feels really good to just hold your movie in your hand. It's great.

Cuddly Toys is now playing. Visit NPCC for tickets and Kansas Bowling's website for her work and updates.