Read An Exclusive Excerpt From YOU'VE GOT RED ON YOU: HOW SHAUN OF THE DEAD WAS BROUGHT TO LIFE

Clark Collis' behind the scenes look at the making of SHAUN OF THE DEAD. 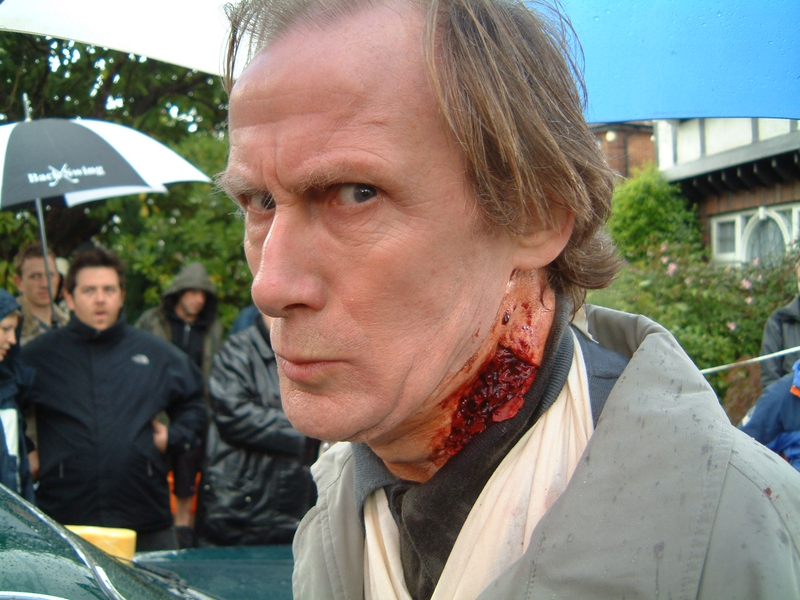 Shaun of the Dead (2004) is a perfect alchemy of horror, heart and comedy. Not an easy blend to pull off, but oh so wonderful when it's done right. Arguably the best to do it since An American Werewolf In London. There are movies that do horror well, there are movies that do intentional comedy well, there are not a ton of movies that pull these off in equal measure while also managing to pull at your heartstrings. One of the few horror movies that without fail, makes me cry. Clark Collis' You've Got Red On You is a deep-dive about how "a low-budget British movie about Londoners battling zombies in a pub become a beloved global pop culture phenomenon." The book comes out November 23, but you can take a peek at an exclusive excerpt (with behind-the-scenes photos) below!

Several of the friends and fans playing zombies turned up day after day, happy to help Wright and Pegg achieve their dream despite the long hours and high temperatures. “For me, Ealing was the happiest bit,” says Tim Chipping. “There were days when it was like the worst factory job in the world, because all you were doing was standing by the window slowly dragging your hand down while they filmed the same scene over and over again. But because you were seeing these two people make their dream come alive, it wasn’t boring, it was amazing. It was just so nice to see them, every day, reach another goal or another ‘I can’t believe we just did that’ moment.”

Paul Gannon has similarly warm memories. “There was a really nice feeling on set,” he says. “Everyone was there to try and make this film. The big space they were filming on was split into Shaun’s flat, and The Winchester, and a bit of the corridor, and the fake outside streets. It meant that many of us could spend a lot of time on the set, just chilling out between takes. I have a lot of pictures of me in Shaun’s flat dressed up as a zombie playing Gameboy. The surreal moment was, we were all sitting in the canteen eating lunch, and I was looking over this whole massive room full of zombies, but every single one was at a table sitting quietly with a knife and fork, eating politely. It was like some kind of weird Italian neo-realism shot.” 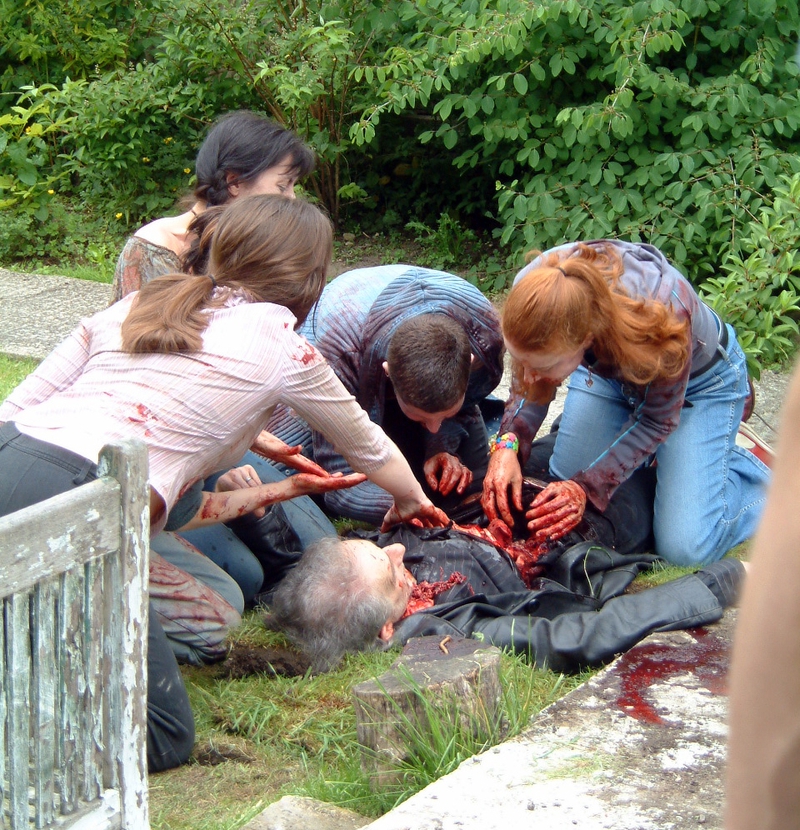 Assistant editor Catriona Delbridge found the sight of zombies eating en masse – even if they were consuming craft services rather than human innards – a disturbing one. “I’ve got such a weak stomach, and I’m terrified by anything,” she says. “I can remember going down to the canteen to have lunch, and seeing the zombies in their get-up, and just being really repulsed, and not really wanting to sit near anybody, especially the guy who gets the record in his face, who I found particularly scary. It was like, I don’t want to sit anywhere near you when I’m having my lunch, thanks.” Ironically, Delbridge found herself joining the zombie ranks on occasion. “When they were doing the scene in the pub, they got everybody down – anybody who was around – to come and do shadowy hands at the window,” she says.

Over time, the volunteers playing zombies started to become firm friends. “You formed little groups, people you were always in scenes with,” says Gannon. “We had a common interest in Simon Pegg’s stuff, Spaced, everything they were doing at the time. We weren’t being paid – we were paid a pound, by law, to be in the film – but we were enjoying just soaking it all up. A lot of the friends I’ve got still in my life now are people I met during Shaun of the Dead.” According to both Gannon and Chipping, the only extras who complained were the professional performers who were actually getting paid to be there. “Some of the agency actors, there was a sort of attitude about them, because they’d done so many films and they’d seen it all,” says Chipping. “There was one particular guy who just would not stop criticising and complaining. He was right behind me, so I could hear him all day. He thought Edgar didn’t know how to direct, and just everything about this was bad, and it was going to be a terrible film. He just wouldn’t stop.” Gannon recalls, “It was always the professional extras – the ones who came from agencies – complaining about the quality of food or how long they had to wait. The rest of us were just, ‘Surely that’s your job!’ Being an extra is primarily a waiting game followed by three minutes of moving your arms. That tends to be it. There was one guy – I wasn’t there at the time – but the story goes that he was kicking off because he didn’t agree with the zombie eye make-up they’d put on him, and he wanted it redone, and he threw a wobbly, and they kicked him off set.” 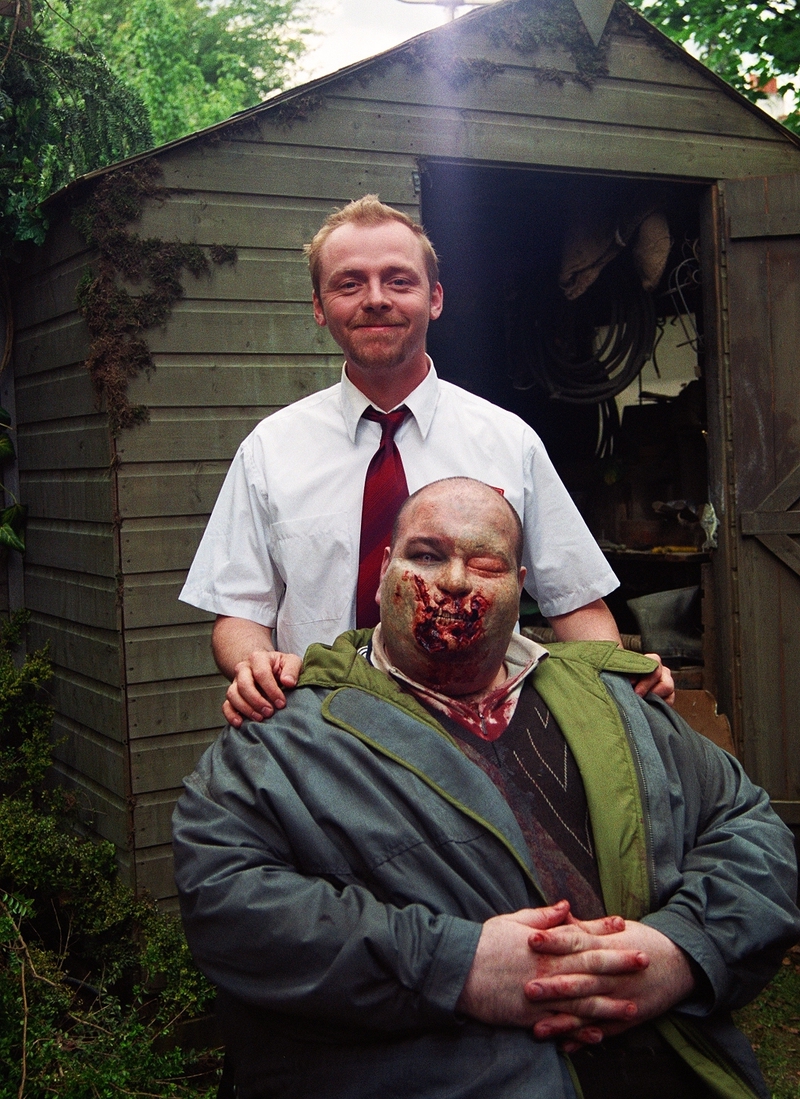 The zombies were rewarded for their unpaid efforts by getting plenty of face time with the film’s two male leads. “Simon Pegg and Nick Frost were always interacting with the extras when they could, chatting, taking pictures,” says Gannon. “It was like a family affair, to some extent, between the creators and the fans.”

Nighy, meanwhile, set an example in terms of putting up with the long days of discomfort. “We got out of the car, and Bill Nighy was covered in syrupy blood – thick, red, gooey stuff,” says Ashfield. “We’d finished for the day, and we were going to go home, and he couldn’t go home without getting really cleaned up first. I said, ‘Oh, Bill, you poor thing.’ He was like, ‘No, what a way to earn a living!’ He’s right. He’s absolutely right.” For Frost, working with Nighy was an eye-opening experience. “Me and Bill, we have a friendship now today, and it started off there,” he says. 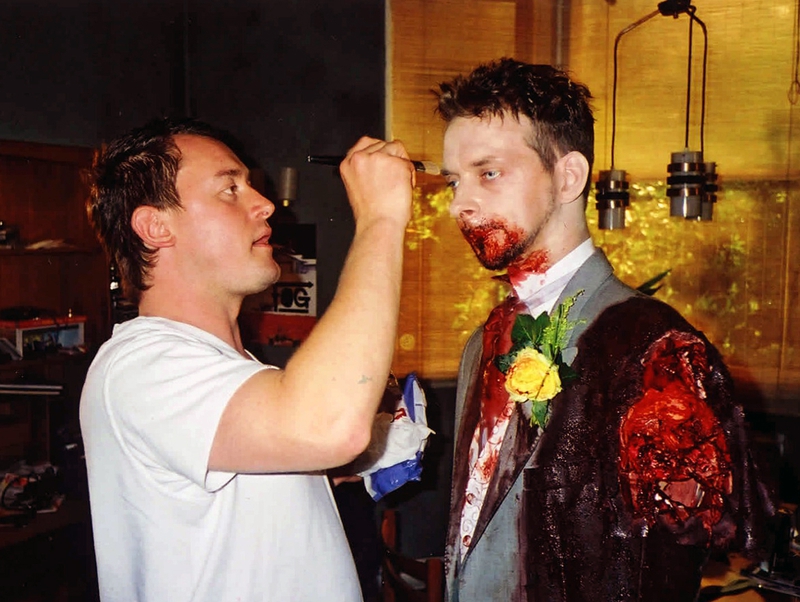 Props department member Segan Friend remains amazed by the quantities of faux gore he and the rest of the props team produced for the film. “We were cooking up our own brew of fake blood,” he says. “The props truck was filled with gallons of it, and body parts that we would dress liberally around the streets.” Once the production moved on from a location, either Friend or his props department colleague Shay Leonard would stay behind to clear up the fake-bloody mess. “Sometimes there weren’t enough locations people,” says Friend, “so suddenly it was just me or Shay, up to our elbows in gore, trying to scrub it off the street. Yeah, definitely got some funny looks, and the blood was predominantly a sugar mix, so you then became a flytrap. You looked even weirder, because you were surrounded by flies, covered in gore, scrubbing the streets. We had a few visits from the police while we were doing exteriors. We’d put signs up saying we were filming a zombie movie and some of it might be distressing, but not everyone would see the signs. They’d see a load of blood-stained idiots running around and be like, ‘Call the police!’” The Shaun of the Dead shoot involved so much fake blood that clear lines had to be drawn about which department was responsible for what gobs of gore. “We were discussing this on set,” says Friend. “Basically, if it was on a bit of clothing, then it was to do with costume; if it was on their skin, then it was to do with make-up; if it was lying around in a pool, it was art department and props; and if it was squirting, then it was special effects.”

One of the most satisfying pieces of publicity was the appearance of Shaun of the Dead on the cover of Fangoria. Specifically, the cover showed the frightening visage of Mark Donovan’s Hulking Zombie above the cover line ‘YOU’LL DIE LAUGHING!’ The cover placement delighted Donovan. “I had an e-mail from Edgar just saying, ‘Brace yourself,’ and he attached a JPEG of the proof in it,” says Donovan. “I used to get FANGORIA as a young kid, but if you’d ever told me I was going to be on the cover of it, I wouldn’t have believed you. It was such an honour, a dream come true kind of thing. When the issue was out, I went into a shop that’s now gone in Covent Garden to buy a couple of copies. The guy at the till was a fan of Shaun and said, ‘I can’t charge you for those.’ I walked out with seven copies free of charge. Maybe that’s why the shop isn’t there anymore.”

Clark Collis' You've Got Red On You: How Shaun of the Dead Was Brought To Life will be released November 23, 2021 but you can pre-order now! Click here to get your copy. LIMITED FIRST EDITION contains red foil gilded page edges, foil cover elements, and a black satin ribbon marker. 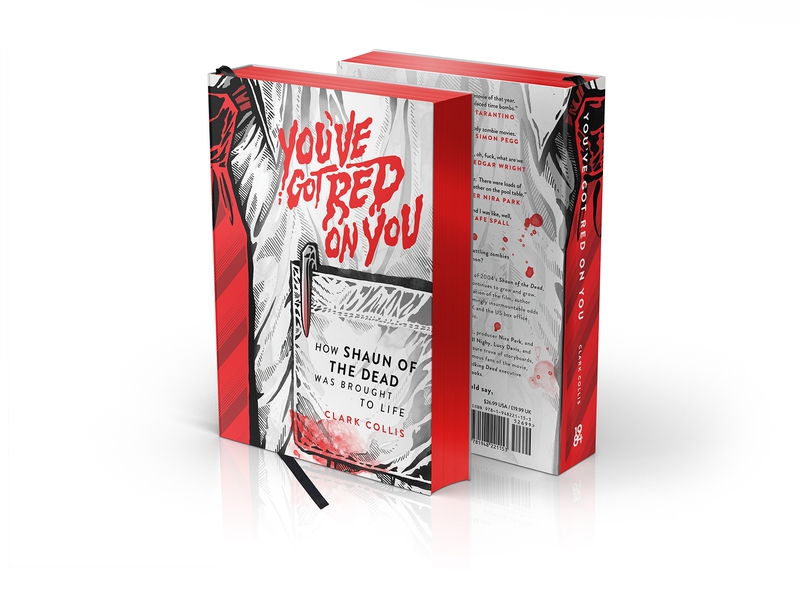