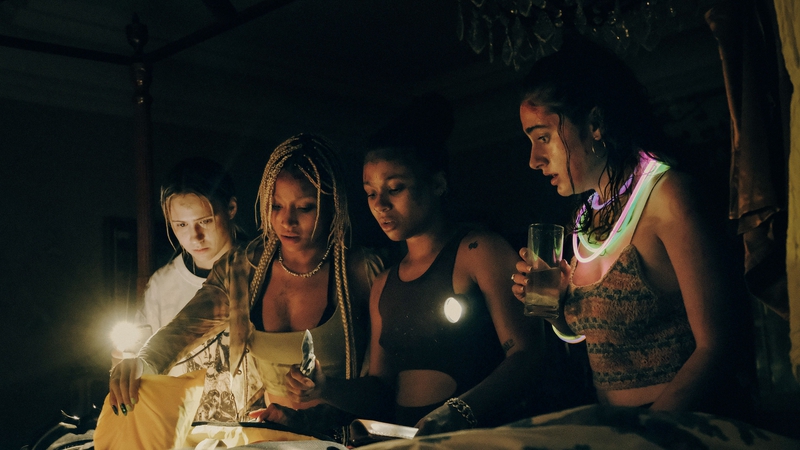 Heading to a secluded mansion to meet or introduce your significant other to nihilistic friends, what could go wrong!? We're finally getting a bit more info this morning with a brand new Bodies Bodies Bodies trailer. We had a vague concept, initially this synopsis is all we had to go on: When a group of rich 20-somethings plan a hurricane party at a remote family mansion, a party game goes awry in this fresh and funny look at backstabbing, fake friends, and one party gone very, very wrong. But now we've got a bit more of the premise! Take a look first:

Alright! So the titular game of Bodies Bodies Bodies seems akin to a live-action version of Mafia. Each player draws a card, the card with an "X" designates the "killer" for the game. The killer must then sneak around and tap victims to "kill" them off. When another player comes across an unfortunate victim, they must yell "Bodies! Bodies! Bodies!" to alert the other players. Naturally, this game of whodunnit appears to have taken a turn that veers a little too far into reality, with what one might assume are actual bodies bodies bodies turning up in the mansion. To borrow a line from our friend R.J. MacReady, "Nobody trusts anybody now." Tensions and suspicions run high as friends turn their backs on one another, and the new girl is singled out as a prime suspect. Nobody is above suspicion!

Catch Bodies Bodies Bodies in theaters August 5th, and check out Jason chatting with the cast on the red carpet during the SXSW premiere.