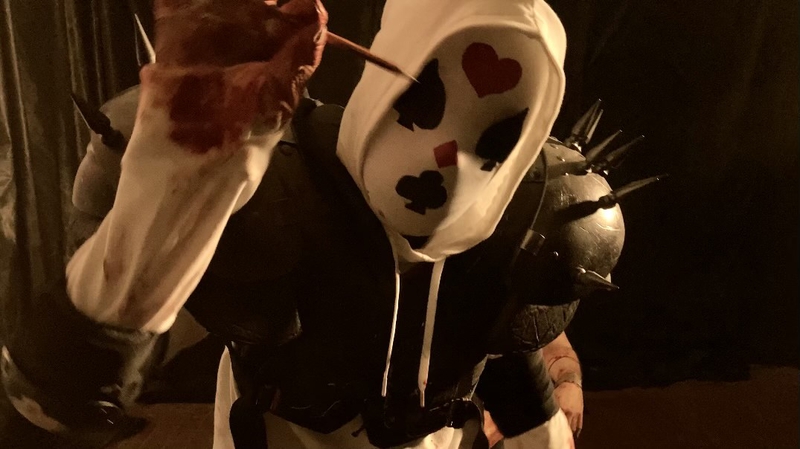 There may not be a current comic book on shelves as unique as Ed Piskor's Red Room (available from Fantagraphics). Grotesque and mesmerizing, it is a sordid, splatterpunk tale, chronicling livestreamed murders as dark web entertainment. It is as brutal as you would expect, but lined with humor, satire, and masterful illustrations.

For those familiar with the series, it seems nearly impossible to bring the world of the Red Room to life, but one man is perfect for that task: Jason Baker, a multi-talented effects creator, protégé of Tom Savini, and owner of Callosum Studios.

Jason worked with his team to create a tense, bloody, short film, the first instance of Red Room in live-action. FANGORIA interviewed him about his experiences in the industry, as well as working with the WWE, designing Blumhouse's upcoming Black Phone, and directing Welcome to Red Room.

What were your earliest inspirations? What made you become an FX artist?

My birthday is in October, so I always spent all my birthday money on makeup and masks. I was that weirdo kid, and my parents thought I was going to grow out of it. But I ended up with a bunch of friends, and we'd run around and make bad slashers in the woods, with no budget, on the outskirts of Seattle. It was the perfect location for our Friday the 13th rip-offs.

I moved out to Pittsburgh to go to Tom Savini's Special Make-Up Effects Program, and then inadvertently ended up working with Tom. I thought it would be for a day, maybe a week of shooting…but it's been nine years.

How has your relationship with Tom grown over those nine years, which has now culminated into becoming business partners?

When I first met Tom, I thought he was just a wonderful guy with a really unique story. Tom, George Romero, and that whole group are so celebrated in Pittsburgh, especially their can-do, guerilla attitude.

For years, Tom and I were just working from his studio, and then I converted the basement of my house to a little effects studio, as well. But then it started snowballing, and we got to a point where I told Tom, "We have to open a real shop… we're getting too much work." These are, of course, good problems to have. But Tom agreed and said, "Well, let's put it all in your name. How about I work for you, for once?"

And here I am, getting to make monsters with one of my childhood heroes.

Of course, we have to talk about one of your greatest collaborations: Firefly Fun House and your work with the WWE, which really brought horror into the world of wrestling.

Jason Baker: You don't meet a lot of horror fans that aren't wrestling fans, and vice versa. It ended up being a pretty perfect fit.

Initially, Tom needed some help recreating Triple H's crown for WrestleMania, and I asked if I could try. That started our relationship with WWE, making masks for various wrestlers and just embedding ourselves into the world. I'd go backstage and see Bray Wyatt, and we'd always talk about doing something together. But then, out of the blue, Bray called me one night and said, "I want to do a children's show…but there's a twist."

I loved it, and we hit the ground running. For the next three months, we worked on everything for Firefly Fun House: the masks, the puppets, the overall theme. We shot the original eight episodes in Pittsburgh, at Tom's school. They let us rent a soundstage, and nobody knew what we were doing (and nobody cared). It's kind of funny, because it became the hottest thing in professional wrestling, but it started by us filming a kid's show over in the corner.

One of your next projects is your work on Scott Derickson's Black Phone. What was it like designing that mask, and getting to see Ethan Hawke embody it?

Dude, I got to make a Universal Monster with Tom Savini.

I went to the mask's test fitting with Ethan. We had to test his mask and immediately get it to set in Wilmington, North Carolina, where Blumhouse shoots most of their movies. So I drove to New York, did the test on Ethan, drove to Wilmington, dropped it off with Ryan Turek and the director, and then drove home and wanted to sleep for four days. But it was an incredible experience.

We worked on it for nearly six weeks, making all of the masks, but the moment that Ethan put one on, it came to life. And I saw it come to life, and it was terrifying.

Ed Piskor's Red Room is incredible, and it is fascinating seeing your interpretation of it. What was your process of taking it from comic book panel to live-action?

The first issue had just dropped, and a buddy of mine was like, "Hey, man, you have to check out this comic book." So I ran over to Eide's Entertainment in Pittsburgh and was just blown away by that first issue.

Then I found out that Ed Piskor lived in Pittsburgh. He's a huge fan of Savini and Romero and that Pittsburgh can-do attitude, so we met up and pitched the idea: "Would you let us take your toy and let us play with it for a minute?"

We went out and shot it in our studio, on a shoestring budget, and did all the effects ourselves. I co-directed it with Aaron J. Shelton: he tackled the visual effects, and I focused on the practical effects and performance.

One of the things we never wanted to do is cut away, because the moment you do, you lose the audience. We tried to hide all of the effects, as much as humanly possible, in-camera. I'm really proud of what we got done, but there's no way I'm getting the deposit on my studio back. [laughs]

There's so much fake blood on the ceiling that I don't know how we're ever going to get it off.

The end result is incredible. Would you want to continue to play in the world of Red Room?

Luckily, Ed loved the film. The comic has an incredible amount of world-building, and it reminds me of the film industry and even professional wrestling, with its rival factions. It has so many fun elements to it that are ripe to be explored further. It is so unapologetic, and I love how Ed does it… he's an equal opportunity sadist. [laughs] There's some class to it all.

And so, yeah, I would love to do more and see how it grows.

Watch Welcome to Red Room below: