Don't Say His Name! Black And Bourgeois Tales Of Terror In CANDYMAN And US

Nia DaCosta's recent Candyman is part of a new wave of horror films that are swarming with ideas; as cerebral as it is visceral, the director deftly balances scares and trenchant commentary on: art and gentrification, problems of representation, police brutality, white supremacy, and the violence that underlies all of these phenomena. It's a heady film, but when the blood needs to flow, it gushes.

DaCosta draws from a tradition that blends shocks with social commentary dating back to the greats — Romero, Cronenberg, and Carpenter, and a newer subgenre to some extent established by Jordan Peele. Not coincidentally, Peele served as one of the producers on Candyman and co-wrote the screenplay with DaCosta and Win Rosenfeld. It is a subgenre in which the heroes and their anxieties are unambiguously Black and bourgeois, and the film can be seen as a thematic companion to Peele's 2019 film Us. To be sure, the two movies would make a smart, gruesome double-feature.

As you will recall, Us was the story of a comfortable middle-class Black family who finds themselves haunted and hunted by their own terrifying doppelgangers. The "tethered," shadow selves to whom they are somehow spiritually connected, the creations of a mysterious government program, forgotten and abandoned to underground bunkers, now escaped and looking for vengeance. On one level, Us was a taught, frightening horror movie; on another, it played as a nightmarish parable about the underclass that forms the subconscious part of neoliberal society; and finally, it was about the fear that we can build ourselves a successful domestic life, only to be confronted by a monstrously Other version of "us," a repressed id that stares back from the reflection in the mirror. 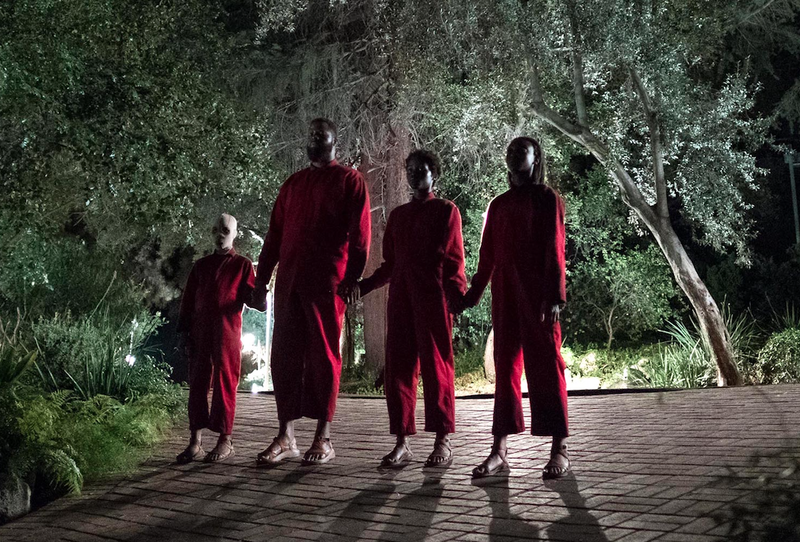 Right from its opening reversed studio cards, Candyman announces that we are again in the mirror world that will reflect our distorted image. This is also Candyman's realm, of course, and the film pays homage to and draws from Bernard Rose's brilliant 1992 movie, which was itself an adaptation of Clive Barker's short story "The Forbidden" and also drew upon a horrific real-life murder. Appropriately, DaCosta's Candyman is a story about how and why we retell scary stories, what we get from them, and what we owe to our ancestors when we do so.

The film's protagonist, Anthony (Yahya Abdul-Mateen II), is an artist whose career has stalled, now living with his partner, art gallery director Brianna (Teyonah Parris), in an upscale condo in gentrified Chicago. Right off the bat, the film announces gentrification as a theme- the Cabrini-Green projects of the original movie have since been razed for new development and the violence/force inherent in removing the original inhabitants from their homes (since the founding of the country, really) has become the ambient noise of urban life. "White people built the ghetto," Brianna complains, "and then erased it when they realized they built the ghetto." Her real estate agent brother, Troy (Nathan Stewart-Jarrett), reminds her she's living on stolen land herself. And Anthony, in the meantime, is living to some extent off his partner. Like Us, the film seems to say we all have someone we owe, and indeed many someones.

Enter Candyman: after hearing bits of the urban legend from Troy, Anthony is fascinated and finally tracks down someone from Cabrini-Green, William (Colman Domingo), who fleshes out the details. Anthony then makes the supernatural, hook-handed killer the star of his latest art show, bringing him newfound success and Candyman the sort of publicity he needs most: the kind that gets people to say his name five times in front of a mirror.

As the murders begin, the new film expands on the original legend. While Rose's Candyman was the son of a slave who was murdered for fathering a child with a white woman, here there have been a series of "Candymans," each with a hook for a hand, and each one the victim of a recurring pattern of racist violence; once by the lynch mob and later by the police. As the pattern seems to be repeating, Anthony finds himself slowly transforming into the racial boogeyman of White society, while not coincidentally creating a buzz in the art world, a situation that suits Candyman just fine.

And so, while not entirely repeating, Us and Candyman, do share very specific anxieties about unearned privilege and what happens when you reach a comfortable place off the backs of unseen victims; be they Candyman or the tethered- sometimes, they come back to claim their vengeance. Both films play off the "imposter syndrome"; a conceptual artwork in DaCosta's film reads: "YOU'RE OBVIOUSLY IN THE WRONG PLACE." Each film's 'monster' is an inverted image of the hero, created by the larger White society, to whom they are now inexorably attached- an id looking back at them. And in both films, the rampaging monster is really more of a buried victim than a force of pure evil. Candyman is an urban boogeyman whose name was repeated, and his story reclaimed; he finally becomes a type of Golem seeking vengeance for the people of Cabrini-Green.

To note these shared themes is not to diminish DaCosta's masterful direction and writing. The film is brimming with striking set pieces, a unique visual style, and a taut story, and it is the first film directed by a Black woman to have reached number one at the box office. Like all movies, this is a collaboration. As an amateur musician, I tend to think of Candyman as a group of brilliant creators jamming together and riffing off an all-time horror classic- that itself riffed off Clive Barker!

At this point, there comes a predictable backlash in which some genre fans complain that movies like Candyman are "too political" or "woke." Horror stories are always set in a specific time and place and reflect the anxieties of the people living (or fighting to keep living) there; and a great many modern horror classics contain a strong social subtext. Consider that one of the genre's masterpieces is about a poor family of slaughterhouse workers who have been thrown out of work by corporate automation! So "Culture War Politics" are nothing new in horror; even the Golem was created to protect the people in his ghetto from anti-Semites- an old school "social warrior"!

However, I think the default assumption has long been that horror movies are made for a predominantly White audience- with a few "Blaxploitation" exceptions- and nearly always made by White creators. There has long been a very enthusiastic Black audience for these films; now, they're behind the cameras. Movies made with a Black sensibility and concerns play differently; imagine the Friday the 13th movies if the local cops were more likely to be threatening than buffoonish. Candyman's best joke plays off the horror movie trope of foolhardy white teens taking dumb chances and getting themselves killed, while a Black counterpart would say "Nope!"

So, it seems that what we're seeing is an emerging subgenre led by a new wave of filmmakers expressing their own fears in their own way. Horror fans should be thrilled. May a thousand bloody flowers bloom!

Nia DaCosta's Candyman is now in theaters and is currently gracing the cover of FANGORIA Volume 2 Issue #12 on newsstands, also available in our online shop.