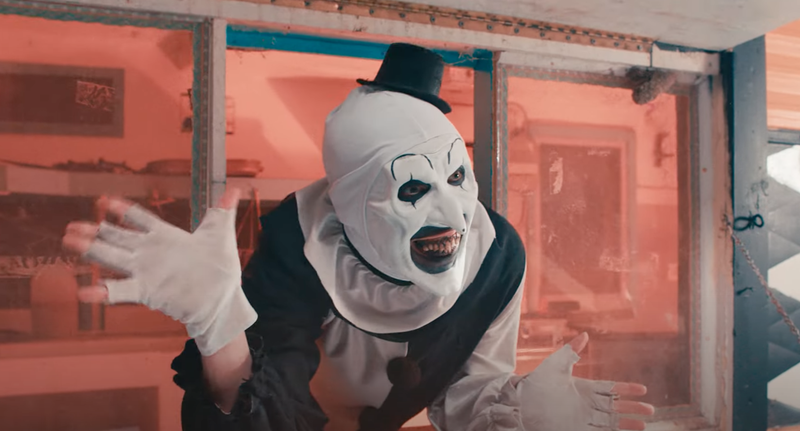 After a world premiere at London’s FrightFest earlier this year, Art the Clown has been scaring his way around film festivals, most recently slicing up a storm at Fantastic Fest this week. Before Damien Leone's Terrifier 2 hits theaters on October 6th, the good folks over at Screenrant have shared an exclusive new clip of the psychotic clown and his latest mischievous misadventure.

In 2016, Leone’s Terrifier became an immediate hit with gorehounds, clown fans and slasher-lovers alike. Terrifier cemented David Howard Thornton’s freakish funnyman as a modern cult horror icon, with the sequel promising to be just as much of a circus. According to Screenrant;

Terrifier 2 ups the horror ante when, a year after the events of Terrifier, Art the Clown is resurrected by a new demonic being who takes the form of a young girl. Art immediately mounts a brutal new killing spree in the town of Miles County, but his special target is Sienna, a teenage girl who cosplays as an angel on Halloween night.

In the new clip, we see Lauren LaVera as Sienna, one of Art’s new playthings, as she is confronted by the clown in a bizarre dream sequence involving cowboy hats, a banjo and some bloody, bladed cereal. We already saw Art get up to some of his old tricks in the first trailer for Terrifier 2, and from the looks of this clip he shows no signs of slowing down.

If you weren't already hyped enough, Slash Film revealed earlier this month that Terrifier 3 is pretty much guaranteed, with Leone commenting that "I would like to just tell a solid story where it has a nice arc for my heroes, my villains, it's complete. So a three is, I can almost guarantee a part three. After that? We'll see if there's anything left and if the fans still are still accepting of this character and this franchise."

Trust us Damien, as long as Art has kills in him, he'll have fans ready and waiting to cheer him on.

While you wait for Terrifier 2 to hit theaters, grab yourself a bowl and chow down on the new clip here: