Cast And Director Of PREY Talk All Things PREDATOR 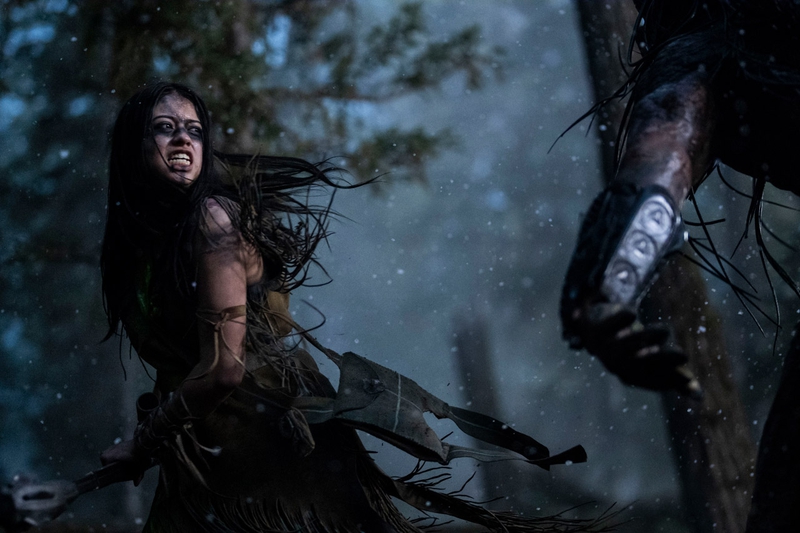 Our favorite space hunter is back in Prey, a brand new prequel film set in the Predator universe. Dan Trachtenberg (10 Cloverfield Lane) helms the film as director, working off a script penned by Patrick Aison (Wayward Pines).

Set in the world of the Comanche Nation 300 years ago, the film follows a female warrior named Naru (Amber Midthunder) who finds herself within the sights of a deadly Predator creature deployed near her tribe.

To celebrate the film's release on Hulu, we spoke with the cast and creative team behind Prey about all things Predator.

With various installments already pitting the Predator against Xenomorphs, Schwarzenegger, and tons of red shirts, taking the helm on a new entry in the ever-growing Predator narrative is no easy feat. Director Dan Trachtenberg discussed how in the dark the creative team was when starting work on Prey.

"Being completely honest, the first [question we had] was 'Cool! When do I get the bible? When do I get all of the history of everything?' It does not exist. We were flying blind enough on our own fandom, myself and the writer Patrick Aison, until we linked up with ADI, who did tremendous work in this movie," said Trachtenberg. "We were lucky to have them not because they are some of the greatest creature artists in the history of movies, but also their history with the Predator franchise meant they had a bible of at least all of the ones they had worked on. It really helped us in not only crafting our creature but just, in general, helping the movie." 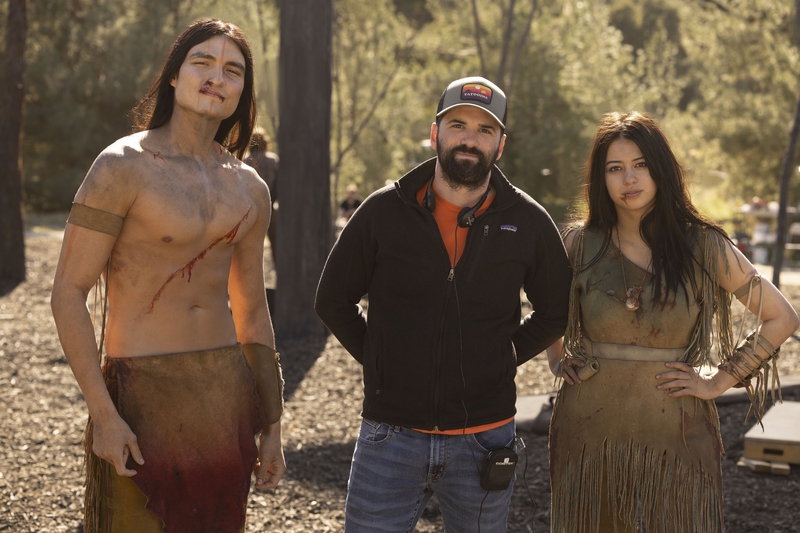 The Predator's design has gone through a plethora of variations and evolutions throughout the franchise. Trachtenberg and his team worked hand in hand with special effects group ADI to design the perfect creature for Prey.

"The thing I was hellbent on was making sure that this felt much more alien and creature-like than ever before. Never allow the limitations of the practical suit to get in our way," said Trachtenberg. "I always wanted the head to be more proportional to the body, so they placed the head on top of Dane DiLiegro, our performer's head, so he didn't have to fit inside, and then it would have to be giant to fit all the gears and gizmos of the puppeteering." 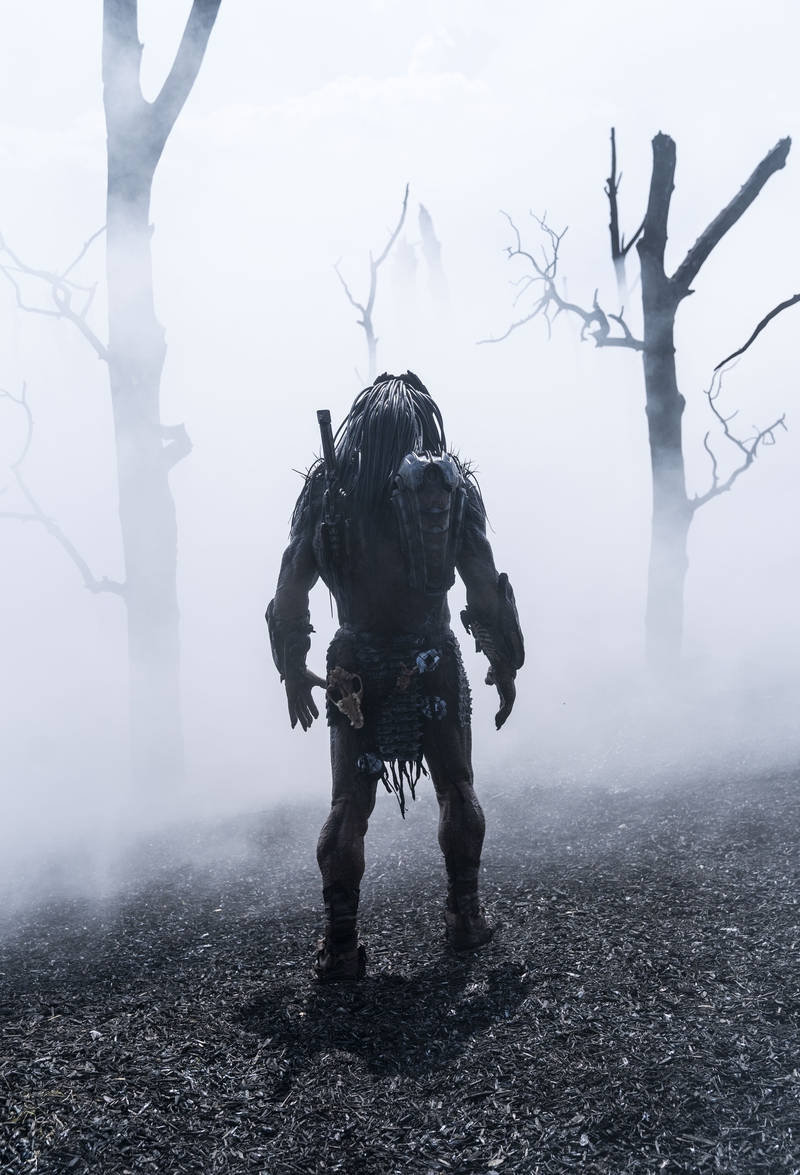 To bring the Predator to life, Trachtenberg collaborated with creature actor Dane DiLegro to discover how this iteration of the alien creature would move.

"There was a lot of frankly taking away rather than adding. There was a lot of making it smaller, the performance. Because there is certainly an instinct to feel like you have to make yourself look bigger, but the suit does a lot of that work for you" Trachtenberg explained. "Dane had a lot of great instincts and constantly brought up ways of handling stuff that I was tripping up on…The ADI team had great instincts not only in the design of the suit but actual puppeteering which brought so much emotion. We talked a lot about how we could make him feel like he's actually angry or curious, so it wasn't just this thing trudging through the woods, you could feel like it was thinking and feeling."

For cast members Dakota Beavers and Amber Midthunder, encountering the Predator himself on set for the first time was an unforgettable experience.

"The first time I saw him, we were still shooting the other scenes without him. There was kind of a buzz on set, and then I see him go walking through the trees. It's kind of like a, 'I just saw a sasquatch' moment, you're like, 'what the heck is that man!' It's kind of a shock but also like damn, that's pretty cool," said Beavers.

"I said, 'I can kill that…' Which was my Naru brain speaking out of my body I think. Then I immediately actually looked at it and spent a long time thinking about the practicality of what it would be like to fight. I looked up to it and was just mesmerized, the suit, the head, the animatronics, and how detailed even the fingernails, the paint on the arms, veins and stuff" said Midthunder. 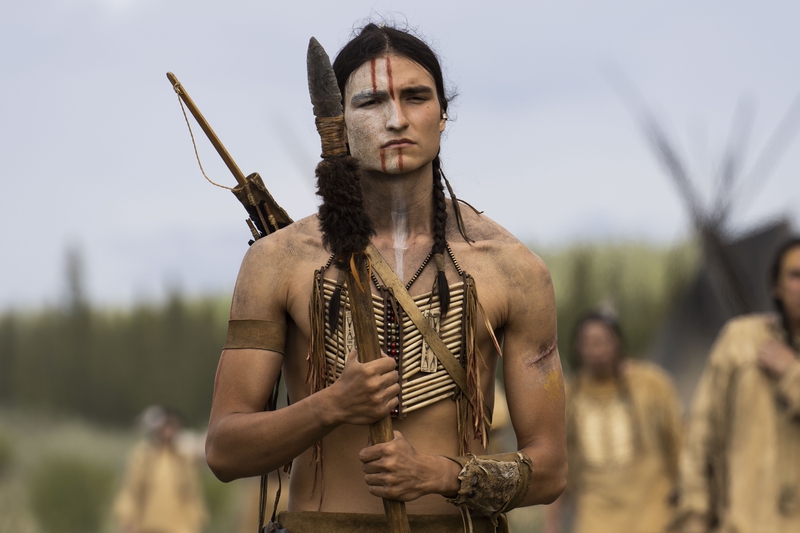 "I kind of went off in the tent and put the headphones in, and I would crank some music that would make the emotions kind of well up within me," said Beavers. "I would try and take that to the scene. I do a lot of eye closing. I kind of just try to shut out everybody. I just close my eyes and go to another place."

When working on any Predator film, one thing is certain: there will be blood. Beavers talked about what it was like seeing the macabre makeup effects on set.

"I remember the first time I saw a decapitated head without spoiling anything. I was watching the camera, and I see this decapitated head swing by the lens. And I was like, 'Holy crap, that looks real.' And it was somebody I knew, it was their head," said Beavers. "I'm really good friends with the woman who is head of the special effects makeup department, and she's just got a bunch of heads at her house. She's got several famous people's heads that she took from different movies. She just has them chilling in her house." 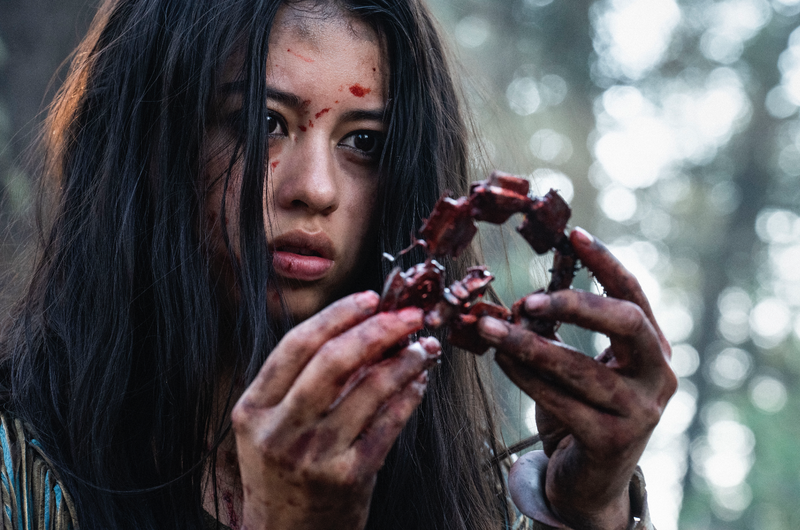 Serving as the film's protagonist, Amber Midthunder has several intense fight sequences with the Predator himself. Midthunder described the challenges of performing choreography with an actor in a creature suit.

"Dane inside the suit can't see anything. He had little eye holes out of his neck, but like he then had to look down so he could barely see out of the eyes, and even when he did move to start shooting, he could only look at feet," said Midthunder. Knowing that I was fighting somebody who was blind and couldn't feel anything was definitely scary because you know once you're going, you're just going, and you gotta hope that nobody messes up."

One of the most suspenseful moments in the film comes when Naru becomes stuck in quick-sand-like sludge in the middle of the woods. Midthunder described the process of shooting the disgusting sequence.

"I wish it was in a studio. But it was just in the middle of the woods somewhere, as our whole movie was. There was like a giant mud pit that was dug out of the ground, and there was a metal platform with the moss over it and then the mud pit. I don't know what it was but it was some kind of thick, muddy, sludge, and it smelled awful," said Midthunder. "It was so heavy, so I would just walk on the platform and at some point I would fall off, and then I would move and move and move and then get stuck under it and have to get out. And every time that I got out, I would get ushered to a water truck for like horses. These four very sweet women would hose me down and hold my things…And then send me back out to do it again. We did that for like five days." 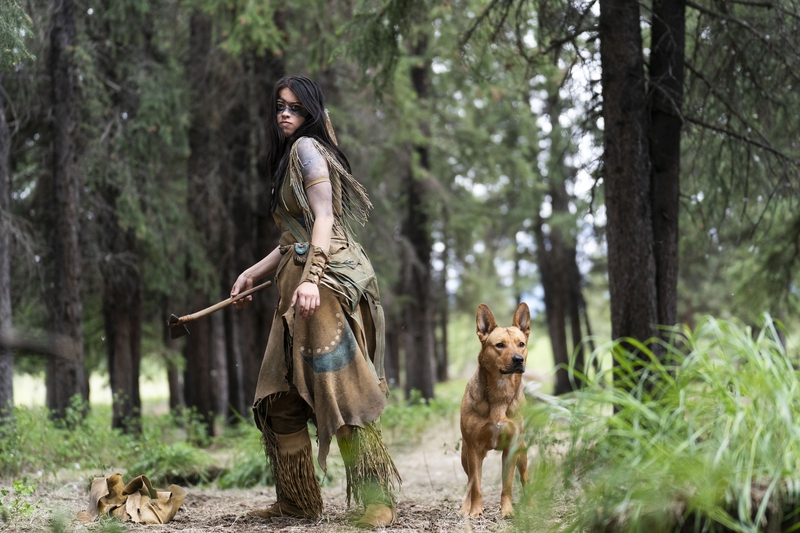 In the film, Naru has a companion in the form of her trusty canine. Midthunder recalled her experience working with the pupper named Coco.

"That dog was chaotic. She was very sweet though, I love her. She was a rescue, adopted specifically for this movie. That was I guess what they found to be the most accurate breed for the time period and the location. So it had to be a dog specifically like her," said Midthunder. "That was maybe like two months before we started shooting, so she didn't get all the years of training that movie animals typically do. So a lot of the days of having Coco around it was a lot of running, a lot of yelling, and a lot of energy. But I thought she was the cutest thing in the world, and I love Coco."

With several feature films under his belt, Trachtenberg definitely understands the genre filmmaking process to its fullest extent. For our final question, he discussed his advice for young filmmakers trying to enter the industry.

"It's a simple one: it's to make things. If you make things as often as you possibly can with the resources that you have available, there's really nothing stopping you. From this weekend coming up and the next one after that and the next one after that, what have you, to make things," said Trachtenberg. "The nuance that would be that there will come a point when you've gotten all you can out of making things with only what's available to you, and the only way to progress, and learn more, and become a stronger storyteller, filmmaker is to then stop just using what's around you and try to make things that you don't have to make an excuse for. So getting real actors, a real editor, cinematographer, producer, all those things so before you hit play for your family, you're not saying, 'Well forgive the sound because', or 'just pretend that my buddy looks 35' None of that. You first need to learn one way, and then you can only progress if you do the other thing as well."

Prey is now streaming on Hulu! 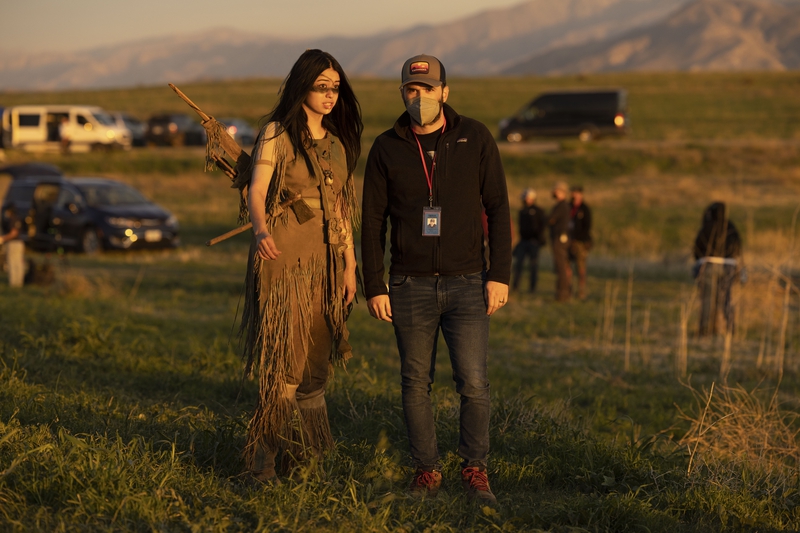