Stay out if you don’t want to get bit. 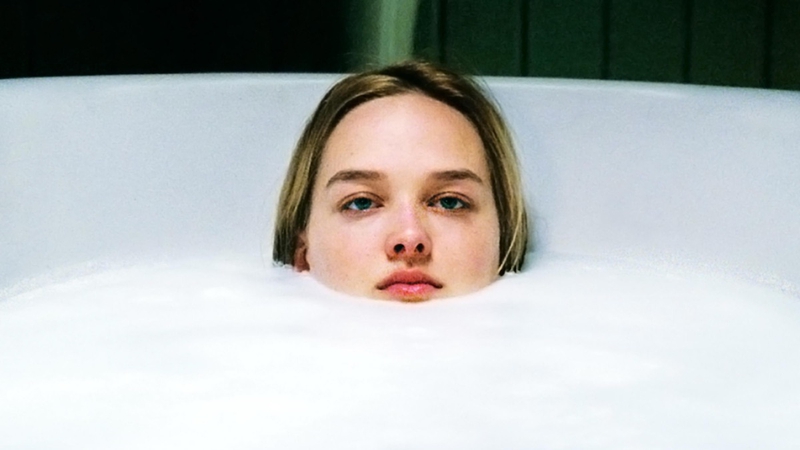 A well-documented and thoroughly remarked upon phenomena in online dating is the prevalence of cishet dudes whose profile pictures show them holding a dead fish. Why? writers from The New Yorker, The Cut, Elite Daily, and so on have all pondered, each article turning up explanations like “it shows he can provide” or “it weeds out incompatible suitors.” But for me personally- horror scholar that I am- the phenomenon is entirely about vagina dentata. Let me explain.

The toothed vagina has been a common figure in the folklore and mythology of cultures the world over since time immemorial, but like all monstrous technologies, the stories don’t all signify the same anxieties or moralities—by which I mean, they don’t all serve the same socio-cultural function. Further, our analyses and understandings of these myths have also changed over time.

Of the lore known to us, three types of stories emerge. In one iteration- the most popular- cishet intercourse is framed as a mythic conquest to the underworld in which a Hero must tame the monstrous vagina dentata, but oftentimes leaves a single tooth for the express purpose of his sexual pleasure. Such storytelling was popular in India, Western Asia, Africa, and amongst Indigenous North American tribes, but it is the indigenous Wapisiana and Taruma people of central South America who tell of the first woman with a carnivorous fish in her vagina. In a psychoanalytic way, the dude who hopes to attract someone with the currency of a dead (conquered) fish isn’t altogether different from Perseus holding the head of Medusa. He thinks he’s an Alpha Hero, and he’s letting you know you’re next.

A subcategory of these narratives conjure the vagina dentata as a strict cautionary tale; one that warns men against rape or intercourse in general with strange (foreign) women. But the stories that account for the third type are diametrically opposed to these, concerned as they are with the agency of the person in possession of dentata.

A legend from the Ainu- among Japan’s indigenous peoples- tells of a woman with a demon in her vagina who castrates multiple men on their wedding night. What distinguishes this legend from others is that the choice to defang her vagina is one she makes for herself in pursuit of her own pleasure (sexual and otherwise). Another of these myths comes from the Māori. The legend is something of a final battle in the mythos surrounding Māui, a beloved trickster figure who birthed islands and descendent of the guardians of the underworld. His botched baptism is said to be the reason for human mortality, so in an effort to achieve immortality, he enters the vagina of the goddess, Hine-nui-te-pō (the “great woman of night”) with the goal of emerging from her mouth, but is instead bitten in half by her vagina’s obsidian teeth.

As Barbara Creed recognizes in The Monstrous-Feminine: Film, Feminism, Psychoanalysis, “The myth about woman as castrator clearly points to male fears and phantasies about the female genitals as a trap, a black hole which threatens to swallow them up…. The vagina dentata is the mouth of hell…who promises paradise in order to ensnare her victims.” The horror of the vagina dentata is in this elucidation of the vagina as “a mouth,” “a doorway,” a cavernous black hole that leads to the interior, that receives (devours) and expels—much as other bodily holes do. All of which makes the vagina dentata among the most essential iterations of The Swallowing.

While much analysis tends to focus on vagina dentata purely as a product of patriarchal culture’s desire to transform difficult women into monsters, I find this argument overly rooted in biological essentialism and frankly just…dissatisfying. Hine-nui-te-pō can be read as a woman, yes, but she is also the earth, the night, the Void itself. A manifestation of the divine.

Though Teeth is (somehow) the only horror movie to give its protagonist an overt case of vagina dentata, a slew of other films can certainly be interpreted through this particular lens. Tremors, Poltergeist, Piranha, Alien, Little Shop of Horrors, The Descent, and The Thing all fit this bill, but chief among them is the Big Bad Shark in Jaws. 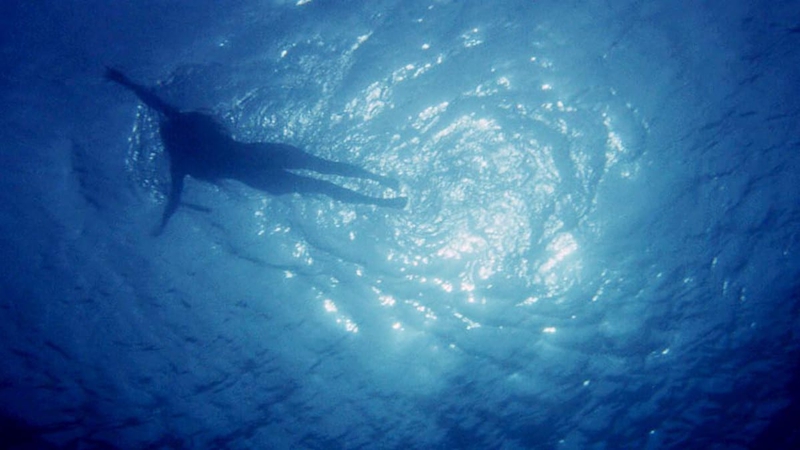 In her studies of the vagina dentata, Creed cites Erich Neumann’s The Great Mother to note the myths that, like those of the Wapisiana and Taruma, “represent the toothed vagina as an animal.” Jaws is far and away the most notable example of such storytelling on film. I’ve written before about the ecophobia of the shark’s villainization but here, we’ll take a more metaphorical, figurative approach to this particular iteration of The Swallowing.

There are deeply compelling parallels between the opening sequences of Jaws and Teeth (I’ll continue to discuss these in the following section), which are both profoundly psychosexual in nature and profoundly preoccupied with consumption/castration. Like the shark, Chrissie’s (Susan Backlinie) unnamed suitor spots her across the party, then stalks her in pursuit as they run toward the water. Chrissie moves gracefully across the shore and leaps into the water while her pursuant clumsily fumbles over himself. “I’m coming!” he calls to her, “I’m definitely coming…I can swim!” And then, out of earshot, “I just can’t walk or undress myself.”

The scene can be interpreted as demonstrative of her sexual prowess and his ineptitude, the ocean functioning as a liminal space of sexual discovery where impropriety is obscured for taking place underwater. But the communion Chrissie experiences isn’t the one she expects. Drawing influence from 1954’s Creature From the Black Lagoon, the shark stalks her from beneath and eventually devours her—but not the suitor too inept to get in the water. The morality is, of course, “don’t go in if you don’t want to get bit,” and bears a remarkable resemblance to the cautionary versions of the vagina dentata myth. From this point in the film, Stephen Heath notes that “all the victims are male and the focus is on losing legs.” Creed paraphrases: “the narrative sets up an opposition between the men and the shark—an opposition symbolized in the long shot of the boat seen through a pair of shark’s jaws.” 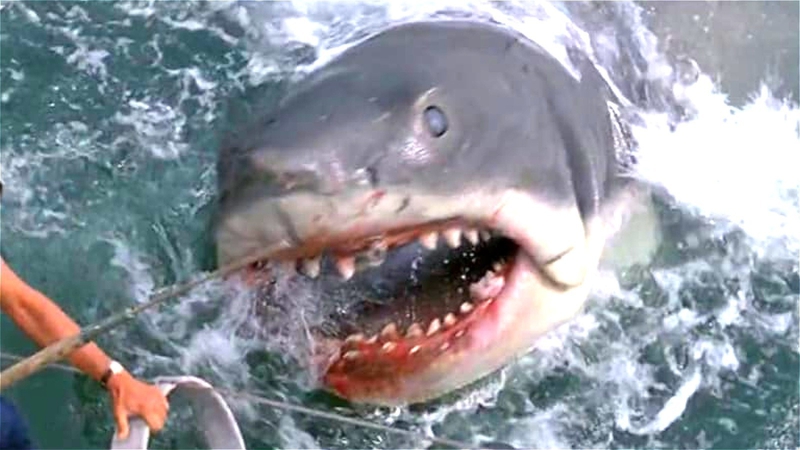 Jaws is, first and foremost, an adaptation of Moby Dick, the American romantic novel by Herman Melville, which similarly sets up a binary opposition between man and the natural world, but more specifically, between man, the ocean, and its denizens. And because water bodies are overwhelmingly coded feminine within just about any global cosmology, and because said denizens (whales, sharks, fish, eels, lampreys, and so on) are geometrically tubular with gaping toothed mouths, this opposition and desire for conquest becomes another iteration of the old vagina dentata myths where intercourse is framed as a Hero’s Journey. As Wolfgang Lederer writes, “the breaking of the vaginal teeth by the hero, accomplished in the dark and hidden depths of the vagina, is the exact equivalent of the heroic journey into the underworld…. Darkness, depth, death and woman—they belong together.”

The devouring shark, the patriarchal compulsion toward conquest and domination, the human anxiety of being devoured by nonhuman, godlike forces all coalesce to make Jaws both a quintessential manifestation of The Swallowing and among our most popular modern vagina dentata tales. 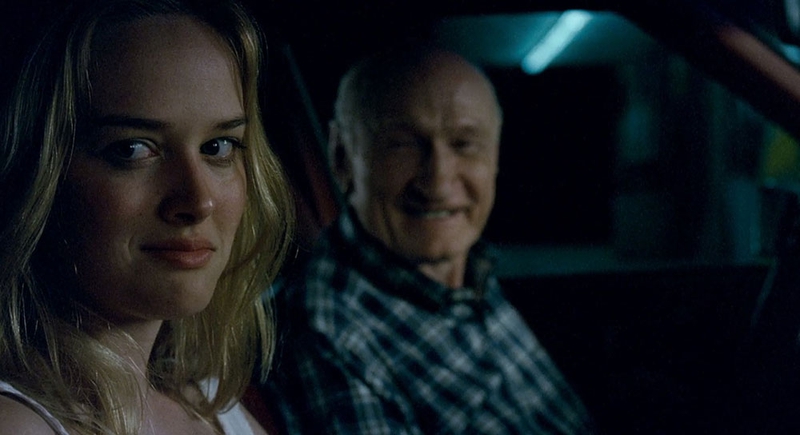 Like Jaws, Teeth opens with a score evocative of a similar sense of imminent doom. The camera’s gaze pans over a Simpsons-esque skyline of suburban banality and lands on what should be the picture of middle-class American idyll: a mom and dad laying in the sun while their children- an older boy, younger girl- sit in a kiddie pool. The quaintness of the image doesn’t last. A blended family, Brad (Hunter Ulvog), the son, isn’t happy. When his father asks him to “stop splashing [his] sister,” he responds with a decided, “she ain’t my sister!”

Also like Jaws, the water of the kiddie pool is a murky, dangerous space of discovery for both the self and Other. Indicated as sexual discovery between the two teens in Jaws, Teeth complicates this with its child-subjects. Immediately after expressing that he does not regard Dawn (Ava Ryen Plumb) as his sister- that they are not blood relations- Brad sees her downward glance and interprets it as a glance at his penis. “Let’s see yours now,” he commands. The camera returns to their parents until Brad lets out several pained yelps. Concerned, they rush over to find his index finger severely bitten and bleeding profusely. The scene is intentionally constructed in such a way that the lines between sexual assault, standard anatomical exploration, and dominance behavior are extremely murky, and the film that follows only strays into more brackish waters. 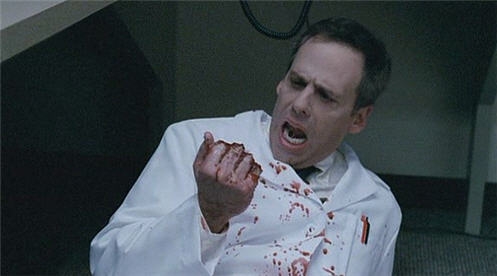 The encounter has an enormous impact on both Dawn and Brad, albeit diametrically oppositional. Dawn (Jess Weixler) grows up to become a devout Christian and- conveniently- an active advocate of premarital abstinence, disturbed by the “impure” thoughts inspired by the new boy, Tobey (Hale Appleman). Brad (John Hensley) is something else. He possesses a strange fixation on his stepsister, even as he torments her with his disturbing attitude toward women in general, which is perhaps best evidenced by the rottweiler named “Mother.”

Because the vagina dentata is a literal rather than metaphorical entity and because Dawn- the possessor of the dentata- is the film’s protagonist, Teeth offers a very different perspective than just about anything that precedes it. Christianity is of critical significance as the veil behind which Dawn hides from herself, though rendered in such a way that it actually reveals the interplay between religious devotion and kink/fetish. The audience is meant to question if her puritanical repression is a symptom of traumatized avoidance from being assaulted by her stepbrother—but is it the assault(s) she’s most traumatized by? Or her body’s defense?

When that veil is forcibly pierced, Dawn is forced into confrontation with herself as The Swallowing, an act which leads her to essentially devour the self she had been to protect her present and future selves from a world (and sibling) that seeks to devour her as well. She understands herself as a monster, but comes to locate power in that monstrosity and a strange sort of freedom in her capacity to terrify.