BE(ware) THE SWALLOWING Love Will Tear Us Apart in THE SADNESS, TITANE And GANJA & HESS

“All romances end in tragedy. One of the key people in a romance becomes a monster sooner or later,” David Cronenberg once wrote. The relationship between love and horror, romance and the gothic, is just that: a relationship. Tensions that co-create each other because even what we might consider a “successful” love, looked at too closely, unilaterally bends horrific. The act of loving is often predicated on the act of romanticizing. To love is to see the best parts of a person; the challenge, to hold their best parts as close as their worst, up to — and oftentimes, beyond— the point that the worst becomes harmful or that harm becomes legible. But where that is can never really be known, precisely because another person can never truly be known, the horror of which inspires a wide range of expressions. Consider the common desire, when presented with a baby (or puppy for that matter), to want to “eat them up,” the inspiration behind one of the most famous rhymes in all of children’s literature: “Oh please don’t go—we’ll eat you up—we love you so!”

Every last one of us has a horror story about romance—by which I mean, a horror story in which either we have been idealized into objectification or have idealized another into fiction. Most of us have several of these stories from both perspectives, and some of us, generations’ worth.

At its most horrific, what dresses itself up as love regularly sanctifies and codifies abuse, rape, murder, torture, and sexual enslavement—and always has. In Venus in Two Acts, Saidiya Hartman points to “the slippage between victims and sweethearts, acts of love and brutal excesses” that characterize “the documents, statements, and institutions” that make up the archive of Atlantic slavery; how “the habitual violence of the slave ship” (in addition to “the pest-house, the brothel, the cage, the surgeon’s laboratory, the prison, the cane-field, the kitchen, the master’s bedroom”) was largely articulated through “the language of romance.” As evidence, she presents the testimony of a ship’s captain who described the captives as “young sprightly maidens, full of jollity and good humor.” By contrast, the 18th-century freedman and abolitionist, Olaudah Equiano- who survived the Middle Passage as a small child- speaks overtly in his Narrative of the “common practice [of] clerks and other whites, to commit violent depredations on the chastity of the female slaves,” children included.

Hartman’s intent is to reveal “the traffic between fact, fantasy, desire, and violence”; how the particular rhetoric illustrated makes plain “the pleasures extracted from the destruction and degradation of life,” and how the ghost of that violence lives on in the archive itself, its language, the desire to romanticize it, to try to make it less horrifying than it was. What she calls the “libidinal investment in violence” is something we still see framed as a form of hunger inherent to human nature precisely because hunger is inherent to human nature. In such spaces, hunger, desire, and divinity become interchangeable- easy to mistake for universal- but when you look at society, whose hungers, desires, and ways of loving are pathologized and who are lavished upon to the point of mass extinction? Put another way, whose gluttony is catered to, and who is told to starve?

The truth is, this topic- love and horror, romance and the gothic, their relationship to The Swallowing- is utterly sprawling. Encyclopedic in scope. It’s possible to draw from anywhere: personal experience, literature, the historical record, from mythology, philosophy, theology, music, the visual arts of all mediums. It is among the most primary preoccupations of human existence, and- it goes without saying- among the most primary preoccupations of the horror genre at large. David Foster Wallace famously wrote that “every love story is a ghost story.” Facts. But the sentiment stretches further. Every story about monstrosity is, at heart, a story about love. 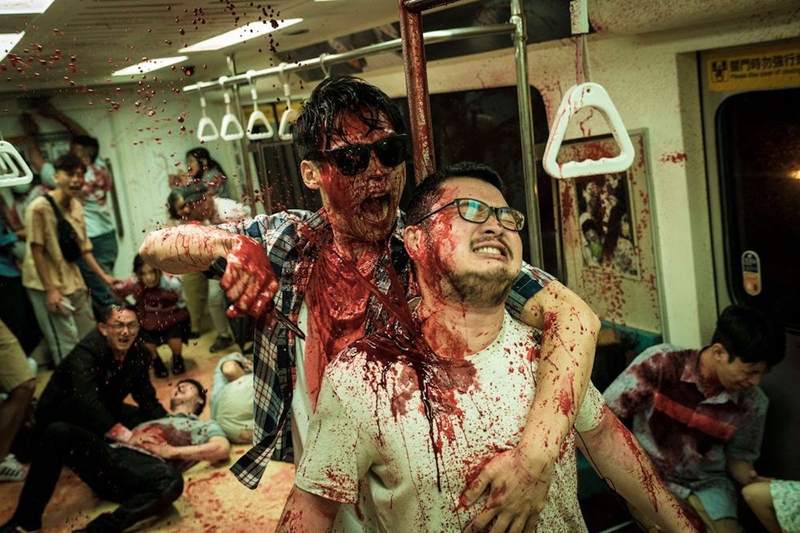 Such themes are at the heart of writer-director, Rob Jabbaz’s Taiwanese pandemic project, The Sadness. You’re going to hear this film described as a zombie movie, which it is but also isn’t. The monsters Jabbaz imagined are far from undead—human, even as they have lost their humanity. As Dolores Quintana wrote, “they don’t want to eat you; they want to hurt you.” It’s out of this small shift in detail that much of the film’s very real horror arises.

Though framed by a love story, The Sadness is not a film for the faint of heart. Jabbaz told Quintana he took inspiration from Peewee’s Big Adventure, using Jim’s (Berant Zhu) bike ride through a devastating vision of Taipei as he attempts to reunite with his girlfriend, Kat (Regina Lei), to propel the film’s action. Meanwhile, Kat attempts to evade a demented businessman (Tzu-Chiang Wan) she first encounters on the train and a litany of other terrors. The body horror, violence, and gore featured in the film is extraordinary, relentless, overtly, and brutally sexual. But it is not violence without purpose. Nihilistic as the film’s visuals are, the point is to refuse to let the audience off the hook; to intentionally make the film a positively ruthless portrait (and condemnation) of the human depravity and absence of care demonstrated during the pandemic’s course.

Jabbaz intends to portray the “libidinal investment,” the same “pleasure extracted from the destruction and degradation of human life” that Hartman observed in the historical archive of slavery. I want to be clear that I am using a historian’s analysis to describe speculative fiction because there is nothing depicted in this film that has not taken place in real life. One scene in particular- I’ll refrain from specificities- so skillfully demonstrates the collapse of the spaces between cannibalistic hunger, desire, and the divine, I’ll likely be thinking about it for years to come. Even as a work of cinematic fiction, the horror imagined in The Sadness is real-life horror: at any moment, we might discover those we love are capable of hurting us and others in ways we never imagined possible. And at any moment, we might discover the same to be true about ourselves. 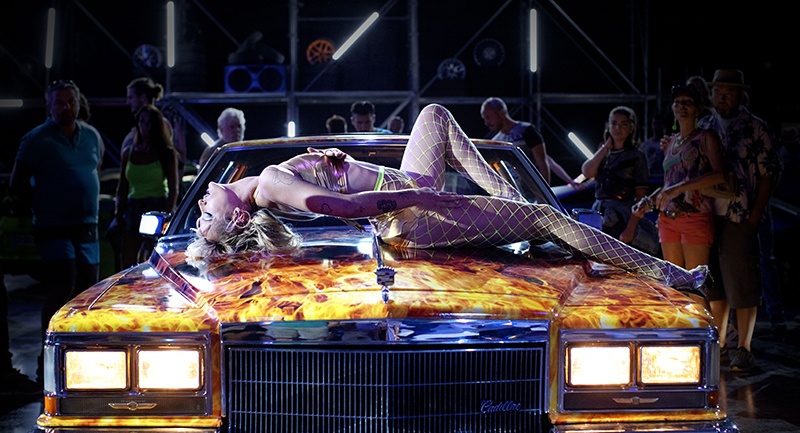 Alexia (Agathe Rousselle) is a lot of things. A serial killer and not. A woman, a man, and neither. On its face, Titane follows her attempts to evade capture for a number of brutal murders, but in actuality, Julia Ducournau’s Palme d’Or-winning feature is a transgressive meditation on the destructive, alienating nature of heteronormativity and the gender binary.

Like its predecessor, Raw, Titane opens with a car crash. This is where we meet Alexia, a child still, in the moments before the crash that would necessitate implanting a titanium plate in her skull—a child with an unusual love of cars. Reintroduced years later, she’s monetized her adoration as a dancer at motor shows where men consume and objectify her image to the same degree as the merchandise up for sale, and where she meets Justine (Garance Marillier), a potential lesbian love interest. Writer, Drew Gregory calls this set up “a trick,” and it is. If the body in front of her isn’t the body of a Cadillac, she doesn’t want it.

The circumstances of Alexia’s first murder feel justified, the following murders, less so. But their triggers are the same: sexual advancement. An undeniable aspect of girl-woman-femmehood is the experience of being perceived as a consumable prey item. Femininity is a trap, so when the opportunity presents itself, she does her best to shed it- adopts the identity of a boy named Adrien who’d been missing for years- but an overlap occurs in this transformation. Her rejection of the gendered and sexual roles prescribed at birth (including the role of daughter) coincides with a strange pregnancy she conceals by binding her breasts and her growing stomach. Simultaneously, the rejection, the pregnancy, the identity swap coincide with a reluctant fondness for Adrien’s father, Vincent (Vincent Lindon), the aging captain of a team of firefighters. In him, we see masculinity as both toxic and tender because Vincent’s love is utterly absolute: relentless, beyond reason, seemingly unconditional.

Apart from the tension derived from the film’s very real body horror, the relationship between Alexia-as-Adrien and Vincent accounts for its emotional stakes. Alexia is subsumed both by what grows inside her, and within the life Vincent imagined for Adrien; Vincent is consumed by his own grief. Their relationship makes quite literal the sentiment of Heidi Priebe’s over-quoted-if-true statement that “to love someone long-term is to attend a thousand funerals of the people they used to be.” In the end, all transgressions are revealed, and both allow themselves to quite literally be devoured- and reborn- by truth, by love, by sheer devotion.

Gregory writes that “Being trans is body horror because being a person is body horror. Trans people are not artificial. All people are artificial.” Titane exposes all the incongruities of gender, of sexuality, of family and love and how complicated the loving relationships between individuals truly are. It reveals that living is a process of endlessly killing, reimagining, and recreating ourselves but further, that loving is a process of endlessly allowing another to kill, reimagine, and recreate themselves—and that is universal. 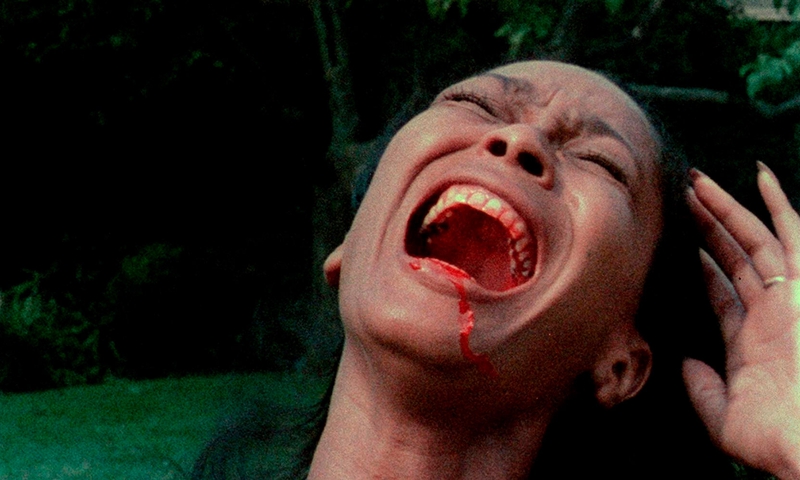 Aesthetically speaking, you’d be hard-pressed to find a film more beautiful than Ganja and Hess, or more romantic in atmosphere. There is a dreamlike quality to the project’s stylization that distinguishes it as a horror film (and product of the blaxploitation era and business model) but which ultimately signals the idealized dream the titular characters represent.

Like William Marshall’s Mamuwalde (Blacula), Dr. Hess Green (Duane Jones) is an aspirational figure: a successful and respected anthropologist, wealthy, elegant, refined. Despite his success and achievements, Hess is haunted by the specter of lynching and white supremacy, primarily because of his proximity to whiteness, being “the only colored on the block.” The initial conversation and resultant struggle between Hess and his assistant, George Meda (played by writer-director, Bill Gunn), illustrates how Black folks are so often denied romance, our dreams interrupted by the looming threat of a noose or other such violence which accounts for the particular gothicism of Black life.

When Meda stabs Hess with a cursed ritual dagger and then kills himself, Hess becomes infected with vampirism. Shortly thereafter, Meda’s widow, Ganja (Marlene Clark) arrives to look for him and is horrified when she discovers his body, but gradually, she and Hess fall in love. In a pivotal moment, Hess asks, “The fact that you think I’m psychotic doesn’t frighten you?” when his addiction is revealed. “Aw man,” Ganja smiles, “everybody is some kind of freak.” As in Titane, there’s an understanding that we’re all monsters in some way; that love is measured in loving the monstrous in another.

I’ve written previously about the magnificent scene of Ganja’s transformation and how it uses both the scream and The Swallowing to indicate the immensity of this moment in Ganja’s existence. But love also signifies The Swallowing in Hess’s consuming guilt at having changed her. Their romance is interrupted when he chooses to kill himself, but the horror of that interruption ultimately gives way to a new dream: Ganja’s.

The film ends with her newly made lover emerging from water, then running towards her, emblematic of the future she imagines for herself. And like all endings that are actually beginnings, there is both romance and horror in this too. While I’m personally inclined to romanticize the possibilities of Ganja’s future, the impulse says more about me than the film itself, which is, of course, the point. Everything we love and desire and offer grace to, everything we idealize, is ultimately a mirror of our own perceived monstrosities. There is no horror without romance.