The Aura Of Horror: Finding Scares In Unexpected Cinema

There’s a faint whiff of fright in the air in these wholesome classics. 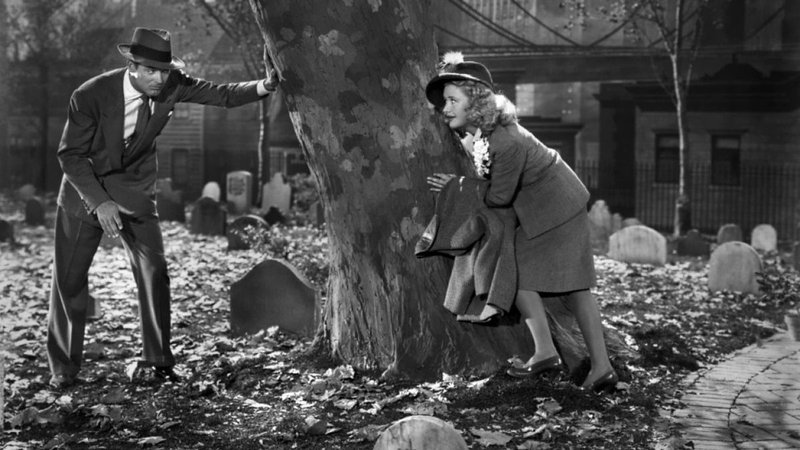 Cary Grant and Priscilla Lane in ARSENIC AND OLD LACE.

Beyond the gothic imagery of the Universal Monster and Hammer films burned into my memory, it’s the atmosphere of old horror I pine for most. Following the lady in white up a winding staircase, clutching her candelabra, visiting the local fortune teller for a little communing with the dead, creaky doors and shadowy figures triggering fear in the imagination – all those spooky details that conjure the spirit of Halloween night.

Exploring cinema adjacent to these eras, I’ve discovered the atmosphere I crave exists in some surprising places. Horror DNA in films like René Clair’s I Married a Witch (1942), Frank Capra’s Arsenic and Old Lace (1944), and David Lean’s Blithe Spirit (1945) convey a haunting aura while keeping the scares to a minimum. This more wholesome approach would later thrive in beloved shows like The Munsters and The Addams Family, where the peculiar began to be celebrated in opposition with traditional society. Sure, these films aren’t classified as horror – they’re categorized instead as fantasy, crime and black comedy. Yet when you look beyond the veil of playfulness on the surface, what lies beneath is undoubtedly mysterious and spooky.

Usually, there’d be no question of genre in a movie that features multiple serial killers and takes place on Halloween. But when you’re shaking with laughter instead of fear, I suppose the scariness gets a little lost in translation. Arsenic and Old Lace masks horror with comedy, using Cary Grant’s slapstick antics to divert attention from what’s happening behind closed doors. (What’s happening is twelve dead bodies buried in the cellar, in case you didn’t know). What I love most about the film is that, in contrast to franchises where the killers literally hide behind a mask, Abby and Martha Brewster (Josephine Hull and Jean Adair) are cheerfully up-front about their little murder-hobby. In fact, these spinster sisters view poisoning lonely old men as a genuine act of kindness. Welcoming them to their humble abode with a glass of elderberry wine – laced with arsenic, strychnine and just a pinch of cyanide, no less.

More telltale beats of horror arrive in the menacing form of Mortimer Brewster’s (Grant) older brother, Jonathan (Raymond Massey), a man who bears a striking resemblance to Boris Karloff, thanks to an operation performed by the inebriated Dr. Einstein (Peter Lorre) immediately following a viewing of Frankenstein. Even Cary Grant’s unflappable swagger is knocked off-balance by the mayhem in this madhouse. From the corpse hidden in the window seat to the elaborate funerals taking place in the cellar, house Brewster is as macabre as any murder house on screen.

I Married a Witch entrusts Veronica Lake’s otherworldly beauty to cast its spell, and it’s one we’re still under decades later. “Long, long ago when people still believed in witches,” before being burned at the stake, she and her father (Cecil Kellaway) cursed the family of their accuser, dooming them to a lifetime of unluckiness in love. More Bewitched than The Witch, Lake’s love spell gone awry invokes something closer to lighthearted romance than fright. Dear old dad, on the other hand, is relentless in his crusade, using his powers to take possession of mortals, burn buildings and have his revenge, no matter the cost. Witchcraft is a punchline at best with plenty of old-school effects setting the scene. Yet one look at the promo photos, featuring Lake dressed as a witch on her broom, surrounded by cauldrons and creepy jack-o-lanterns, summons exactly the Halloween vibe we October people find hard to resist. 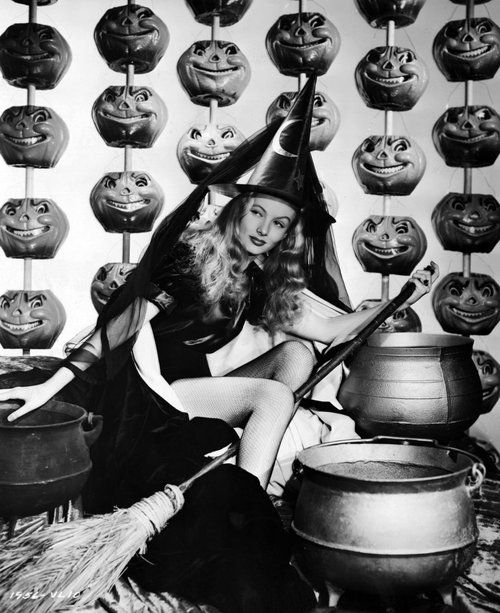 Then there’s Blithe Spirit, kicking off its ghostly romance with a séance conducted by the amiable Madame Arcati (Margaret Rutherford) – a psychic medium both bold and down-to-earth when it comes to her eccentric gifts. The atmosphere here is designed with an array of enchanting effects. Raising the spirit of the dreaded ex-wife, once again, charm and romance take the spotlight. From Elvira’s (Kay Hammond) ethereal appearance to the wicked delight she takes in stirring up trouble between her ex-husband (Rex Harrison) and his second wife (Constance Cummings), there’s an air of gothic elegance to this pastel ghost story. Of course, it’s all fun and games until it ends in murder.

Now, I’m not suggesting these films should be classified as horror, only that they have enough of a dark side to appeal to fans of the genre – those, like me, who revel in the shadowy corners of cinema to keep the spirit of Halloween alive year-round. Because even disguised by playfulness, as in any good horror flick, it's what’s left to the imagination that awakens the mind to fear. Although the horror may be subtle in these wholesome classics, it still lingers in the air.