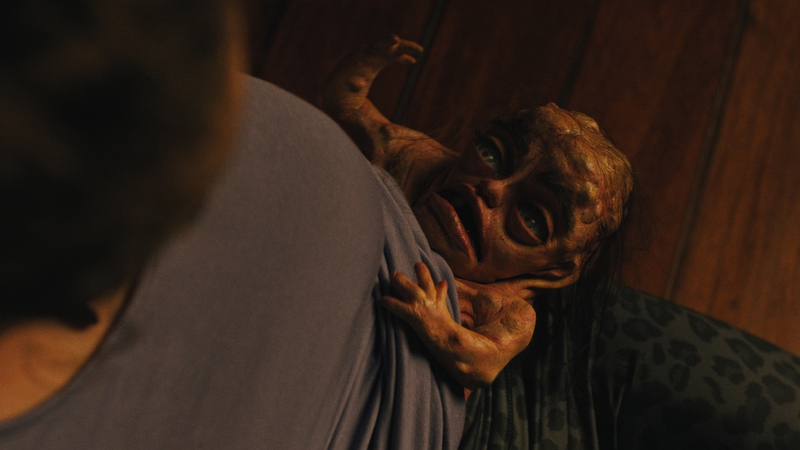 Hulu is partnering with 20th Digital Studio to produce nine upcoming horror features over the next few years. The nine-film lineup will be direct expansions of the platform's "Bite Size Halloween" short film collection. One of those bite size horrors is currently playing at the Sundance Film Festival. Anna Zlokovic's Appendage centers on a young fashion designer who is dealing with a physical manifestation of her anxiety. This bite size body horror stars Rachel Sennott (Shiva Baby) and Eric Roberts and you can catch it at Sundance right now. Zlokovic has signed to write and direct the feature length adaptation and casting is reportedly already underway.

The rest of the upcoming feature film slate is rounded out with tech horror, animatronic pandas, Shannyn Sossamon, and more wonderfully horrible imaginings. Here's a breakdown of the first round of confirmed films being added to the collection:

Wormeater, a rural British family trauma body horror from writer/director Ben Steiner,  recently completed filming in the UK with stars Kate Dickie (Game of Thrones, The Green Knight) and Jemima Rooper (The Girlfriend Experience, upcoming Flowers In The Attic: The Origin). The film is a thematic successor to Steiner’s 2018 20th Digital short Urn.

The Hug, will expand on the story of the animatronic "Pandory the Panda" who terrorized children in his Pizza Palace in a viral 2018 short from 20th Digital. The original creators, writing/directing team Jack & Justin (Bishop and Nijm, respectively) have signed on.

Clock by writer/director Alexis Jacknow and inspired by the “Bite Size Halloween” 2020 short of the same title will follow a woman's desperate attempt to fix her broken biological clock.

Additional scripts from “Bite Size Halloween” filmmakers are currently in development and will be announced at a later date.

Click here to get your Sundance Film Festival Tickets, going on right now. Packages and single screening tickets are available. Visit the official festival page for Appendage here, and we will keep you posted on Hulu's upcoming horror slate!