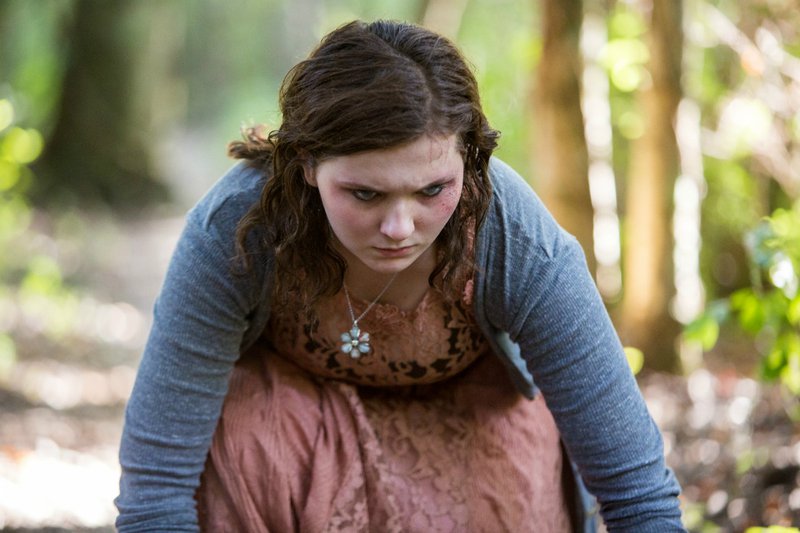 Editor's Note: This was originally published for FANGORIA on May 5, 2015 and we're proud to share it as part of The Gingold Files.

To portray a teenager slowly succumbing to a zombie virus, who better to cast than a young actress who considers The Exorcist a bedtime story? Starring opposite Arnold Schwarzenegger in Maggie, Abigail Breslin is a living dead girl who’s heartbreaking rather than horrifying, and took some time to talk to FANGORIA in this exclusive interview.

Maggie takes place largely in and around a rural home where farmer Wade Vogel (Schwarzenegger) does his best to care for his daughter Maggie while an undead apocalypse rages in the world around them (see review here). Directed by Henry Hobson from a script by John Scott 3, Maggie is the latest in a string of genre features the 19-year-old Breslin has appeared in. After making her screen debut at just 5 as Mel Gibson’s daughter in M. Night Shyamalan’s Signs, she did a series of comedies (including an Oscar-nominated turn in Little Miss Sunshine), family fare and TV shows before returning to the fright fold as the rifle-toting Little Rock in Zombieland. Since then, Breslin has played a ghost making her way through a time-bending scenario in Haunter and a psychopath’s abductee in The Call; she has the teen shocker Final Girl coming up later this year and is currently filming the Fox series Scream Queens opposite Emma Roberts and Jamie Lee Curtis.

Back when you were fighting the undead in Zombieland, were you thinking that it might be fun to play one?

Yeah; I actually asked one of the producers on that if they’d let me be a zombie extra, and he just said no way—it would take too much time to get the makeup on and off of me. So it has always been a dream of mine, and it’s a little bit different this go-round, but it’s still very much a dream fulfilled [laughs].

Maggie presents zombieism as a metaphor for a terminal illness that your onscreen family has to deal with. Was that an idea you explored while preparing for and playing this character?

Yeah. To me, Maggie is so different from most zombie movies. It really is about the slow progression and deterioration that the virus puts you through, and the isolation—socially, and even from your family. It’s about caring for someone who is that ill, but with a more immediate kind of fear, because Maggie could turn violent at any moment. It was kind of difficult, because there weren’t many references for this approach to the zombie virus, so we were kind of making it up as we went along. That’s why I was drawn to it, because I’d done Zombieland, but this was a unique kind of zombie movie.

One thing that makes it unique is Arnold Schwarzenegger playing a role unlike any we’ve seen him in before. How was it working with him?

It’s definitely a very different movie than I’ve seen him in, and it’s certainly surprising when you first hear that Arnold Schwarzenegger’s playing a farmer. It’s hard to not have a preconceived notion about someone who’s been in movies like The Terminator; he’s so iconic and so well-known for being who he is. Before I met him, I was kind of expecting that, and Henry, the director, was just like, “He’s totally different.” And he was; he was so nice and warm and funny, and talking about his kids all the time. One day I was in hair and makeup complaining about some guy, and Arnold was right behind me asking questions about him, like, “What is he doing? What’s going on? When did you guys first go out on a date?” And I was like, “I’m having this conversation with Arnold Schwarzenegger right now!” He was always a generous person and actor, and he’s amazing in the movie; he brings such a vulnerability to it. He was perfect for the role.

What was the experience like wearing all the special makeup the role of Maggie required?

The makeup was really fun for me. I’m a huge horror fan, so I love doing stuff like that. The contact lenses kind of drove me crazy, because I couldn’t really see in them, so I was always bumping into things and walking along the walls. But I had a blast doing it. The only time it would be a problem was when I had been working a long day, and then at the end I had to take the makeup off, and I’d be like, “I’m not in the mood, I’m just going to go home.” One time we stopped at a restaurant, me and my mom, and I went into the bathroom totally forgetting I was wearing a dress where you could see my legs, and I had black veins and blood and a prosthetic thing on my leg. This woman who was washing her hands in there just shrieked, and I was like, “What?” She said, “Um…are you OK?” and I was like, “What are you talking about?” and she just ran out. I was like, “I’m so, so sorry, this is just makeup from a movie I’m making…” It was hard to explain!

Maggie’s slow deterioration is crucial to the film’s drama; was it shot in sequence, and if not, was it difficult to express that progression while shooting out of order?

It was not shot in order—well, some of it was. We did film a lot of the first stage early on, and then we jumped around a bit. It was a short shoot, so we had to go by which locations we had at the time. Henry really spaced it out well and was good about making sure I knew where I was at each point. In the makeup trailer, we had this list of stages; it was 1, 1.5, 2, 3, 3.5 and 4, and under each stage it said what the makeup was and things like, now she can smell humans as meat and things like that, so I knew, for example, “Today, she’s stage 2.” It was a pretty good system going, so I never felt totally discombobulated—though toward the end, we had to do four of the stages in one day!

Haunter was another recent film where you navigated a complex story; what was it like shooting that one?

Haunter was really fun to make, and challenging. It was a long shoot for me; I was 16 on that one, and it was in Canada, and in the States, when you’re 16, you work a certain amount of hours, but in Canada, you can work way longer than that. I was alone for most of it, so it was kind of crazy, but Vincenzo Natali, the director, was amazing—he always made sure I knew where I was, at which point of the movie. It was definitely weird, because we were all in a studio and not a real house, with smoke machines going all the time, and then you’d leave and be like, “Oh my God, there’s still sun outside, it’s still day!” I got to do a lot of action stuff on that too, and I had a great time with that.

A couple of years ago, it was announced that you were going to star in a movie called Peste that sounded very similar to Maggie; both scripts were even on the Black List. What happened to that one?

I don’t know; I couldn’t even tell you, to be honest. I just remember that I was going to do it, and then Maggie came along and I did that first, and I’m not really sure what happened with Peste.

What are some of your favorite past zombie films?

That’s really hard, because although I’ve always been a horror fan, I haven’t seen too many zombie movies. I love Shaun of the Dead, but that’s more of a horror/comedy. I’m only just now starting to get into serious zombie movies; I didn’t really watch any before I did Maggie, because I didn’t want to get any idea about zombieism; I wanted to make Maggie different. I’m really more into exorcism movies, actually.

Exorcism/possession is one of the only horror subgenres you haven’t done yourself; would you like to star in a film of that type?

Yeah, I totally would. Anything like that would be really cool for me, just because I’m such a nerd; when I’m talking to my friends like, “I’m really stressed tonight, I’m going to watch a movie and go to sleep and try and calm down,” and they ask, “What are you going to watch? A romantic comedy or something?” I’ll be like, “No, I’m going to watch The Exorcist. Duh! Isn’t that what everyone falls asleep to?”