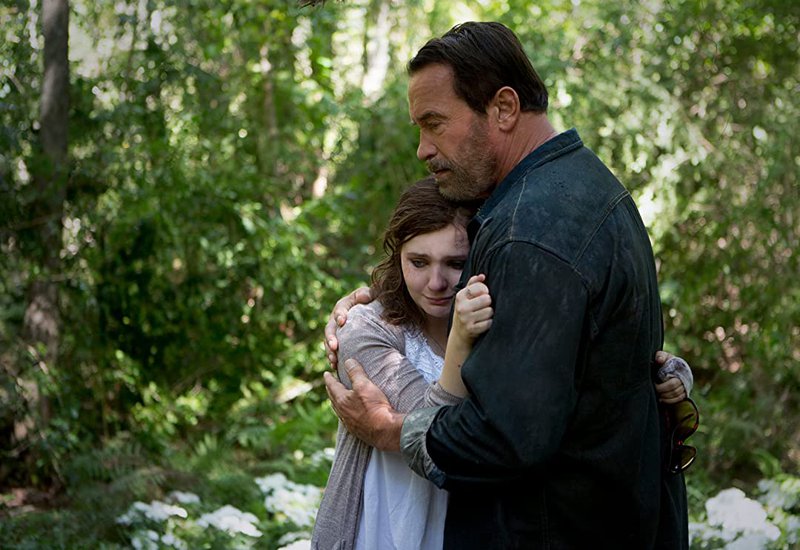 Editor's Note: This was originally published for FANGORIA on April 23, 2015, and we're proud to share it as part of The Gingold Files.

Maggie is not what a lot of people will expect when they hear it described as an Arnold Schwarzenegger zombie movie, and in the end, it’s not really Schwarzenegger’s film. Abigail Breslin is the true star, and she kills it (no pun intended).

Maggie does begin like the end of a typical Arnold epic, with a city in ruins, abandoned and wrecked cars strewn across highways and fields in flames. The world has gone to heck thanks to a “necroambulist virus,” which slowly turns those afflicted into mindless flesheaters. Screenwriter John Scott 3, making an auspicious debut, cannily presupposes that the basic tenets of the undead genre are by now common knowledge, and plunges us right into a scenario in which farmer Wade Vogel (Schwarzenegger) drives his pickup into the midst of the madness, in search of his daughter. Teenaged Maggie (Breslin) has picked up the infection from a bite on the arm and run away from home for the sake of her family’s safety, but Wade, who has already lost his wife and is not about to lose their child as well, successfully tracks her down and brings her home.

The idea of Schwarzenegger, with that unmistakable accent, as a rural Midwesterner does give one pause, though he certainly still has the physique of a man who has spent his life working the land. The movie, in fact, gives him only a handful of lengthy dialogue scenes; for the most part, Wade is a man of few words and a lot of emotion as he deals with Maggie’s gradual dissolution, Scott’s screenplay mining the same metaphorical territory as David Cronenberg’s The Fly. Schwarzenegger proves up to the challenge of a more internal, heartfelt role, making it easy to empathize with his devotion to his daughter. And of course, you believe it when he stands up against anyone who might harm his little girl or take her away from him. Joely Richardson, as Wade’s new spouse and Maggie’s stepmother Caroline, has her own share of affecting moments playing a woman whose love for a child who isn’t hers is severely tested by the distressing circumstances.

The film belongs to Breslin, though. Having previously fought Zombieland’s hordes of ghouls, the young actress proves (as she did in the underseen Haunter) her skill at navigating and expressing all the shadings of a role in which she herself is fated to become one of the living dead. Alternately succumbing to grief and terror and desperately trying to hang onto normal teenage life (particularly in one moving sequence during which she reunites with her circle of high-school friends), Breslin is heartbreakingly good, bestowing Maggie with an innate humanity that shines through even as her physical appearance deteriorates.

That condition is evoked via excellent makeup by department head Karri Farris and her team of FX artists, whose work on Breslin and various secondary zombies strains the boundaries of the PG-13 rating to the breaking point. Despite the decaying flesh and destroyed brains, however, Scott and director Henry Hobson (also a feature newcomer making a strong first impression) are after a dramatic mood piece rather than a typical horror show, focusing less on the gory details than on the way its people react to them, succumbing or not to their fears and suspicions. Using plenty of tight, handheld close-ups for an especially intimate feeling, Hobson creates a portrait of a family, as well as a community, under gruesome pressure that could be an especially affecting side story to The Walking Dead (for which Hobson designed the opening titles).

Hobson’s talented compatriots in maintaining that atmosphere include cinematographer Lukas Ettlin and composer David Wingo (who previously elicited Middle American unease with his score for Take Shelter). Their concerted achievement is to steer a subgenre that has recently been done to, well, death into new territory where it can strike chords one doesn’t often find in movies about people succumbing to a blood-hungering pandemic. This is one zombie movie that’s alive with human feeling.