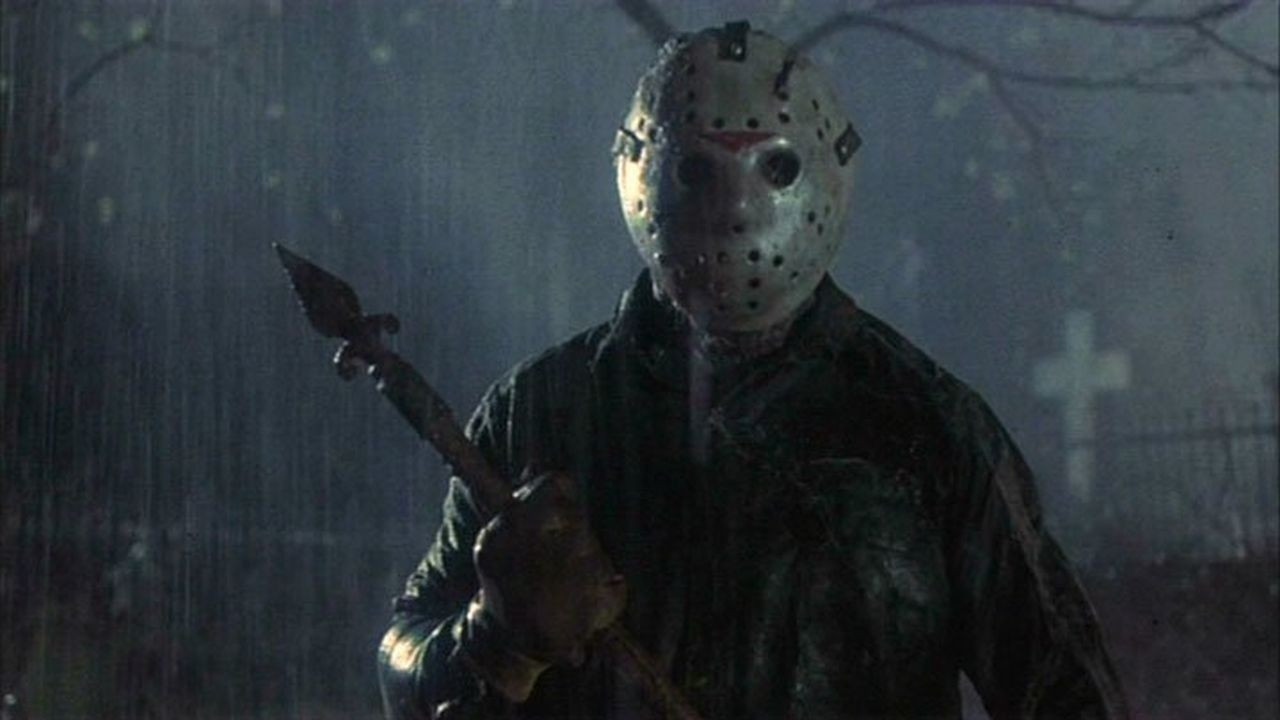 Recently, Fango EIC Phil Nobile Jr. was enough of a mensch to send me a link to a Twitter thread that had just gone up, and which he wanted me to be able to read before what he anticipated would be its quick deletion. In case it’s gone by the time you’re reading this (aaaaand it looks like it is), it was a deep-dive confessional by Friday the 13th reboot storywriter Mark Wheaton explaining how he’d pitched the film as a replacement for New Beginning, which would serve to tie together disparate plot threads of the various entries in the franchise. It was a fascinating read, and it got me thinking about something that’s interested me for years now, and which would be the subject of my own Friday the 13th dream project: a unified theory of Jason Voorhees.

Now, the one thing the Friday the 13th movies have kept consistent is that Jason drowned as a child due to the negligence of the counselors at Camp Crystal Lake; that years later, his mother sought revenge against a completely different group of counselors* and got decapitated for her trouble; and now Jason is back and he’s pretty pissed. That’s pretty much the only stuff the movies have been consistent about, though. Whether it’s the dates the movies take place (Tommy’s age difference between parts 4 and 5 pushes the chronology forward about a decade, while part 8 clearly takes place in the 1980s), if Jason’s body was cremated or buried, or what color Jason’s pants are, these were movies made for the primary purpose of making a quick buck and often without the input of any creatives from earlier entries in the franchise. The result is some of the most muddled character backstory in the horror monster canon; and I’d like to take my own personal, totally unbiased shot at coming up with a unifying theory of Jason Voorhees that ties everything together and makes some sense of him, or rather as much sense can be made from an eight-foot-tall hillbilly superkiller. In order to do that, let’s take a look at the piece of swiss cheese that is Jason’s character arc.

The series is quick to start playing fast and loose with its own canon, already changing things up with Part 2. Since Jason is the villain this time around, the creators had to come up with some explanation for why he was running around the woods killin’ folk and not at the bottom of a lake. The movie opts to have Ginny speculate on a super convoluted chain of events that the audience is apparently meant to take as fact: that Jason somehow survived his drowning as a child; that, despite apparently having special needs, he was able to survive in the wilderness for the next twenty-plus years; and that, on the night of his mother’s death, he just so happened to emerge from the woods right in time to see her die. Notably, this film gives us the most normal looking Jason we’ll ever get: He’s of average height, has normal looking hands, the beard and hair you’d expect from a guy who’s lived alone in the woods for most of his life, isn’t terribly deformed, and walks and runs like any guy on the street.

Part 3 more or less runs with the same continuity, with Chris Higgins having survived a previous encounter with Jason a year prior to the film’s events, indicating he was wandering around before his mother died. This subplot becomes problematic for a few reasons, including the fact that it depicts Jason wearing the same clothes we see him obtain at the beginning of the movie, and that he inexplicably allows Chris to live. That narrative decision was part of an aborted plan to turn Jason into a sexual predator and make Part 3 a rape/revenge movie; thankfully, more sensible heads prevailed, realizing that it’d probably hurt ticket sales to turn the star monster of their franchise into a rapist. In one of the series’ few attempts to reconcile its own continuity, Jason’s injury from Part 2 is made less severe, though we’re beginning to see the seeds of supernatural qualities—while a machete to the shoulder wouldn’t be immediately fatal to most, it’s still not something you walk off, and he’s decidedly less human looking here.

The Final Chapter is where stuff gets really sketchy. While not explicitly introducing the supernatural, this film gives us a Jason that spends the first several minutes of the film apparently dead—a natural reaction to getting an axe planted in your head. When he wakes up/resurrects, he’s the least human we’ve ever seen him, with a faint green tinge to his skin and clawed hands, to say nothing of the very fatal looking head wound.

Of course, by the time Part VI rolls around, things get explicitly supernatural—no one was going to ask audiences to believe that he could survive getting a machete through the head and then subsequently being diced like a tomato by a pissed-off Corey Feldman, so Tom McLoughlin gave us an electrically-charged Frankenjason. In addition to salvaging the franchise, McLoughlin also made an important impact on the character’s backstory—per this version, Jason had drowned as a child, was always a supernatural force, and, what’s more, has a mystical link to Crystal Lake. Not only would this be the mythology used in the next two films (and kinda-sorta Freddy vs. Jason), the retcon also corrects most of the issues with the previous films. If Jason really did drown as a child, and he is a supernatural force borne of revenge, everything suddenly makes sense.

If we accept that the attack on Chris occurs after Pamela’s death, then it’s his mother’s demise that resurrects Jason from his watery grave—meaning that, perhaps, the canoe “dream” at the end of Part 1 isn’t a dream. This gives Crystal Lake mystical powers, so is it hard to accept that Pamela’s severed head dropping into the waters could serve to revive Jason as a vengeful spirit in the same vein as the Japanese onryō or Navajo chindi? One of the things that’s personally appealing about this theory is that it gives the series an even greater tragic arc, cementing not only a unifying vision of Jason himself but a cohesive thematic theme to the entire franchise: the consequences of child abuse, and the unique position survivors find themselves in as they grow into adulthood and lose the sympathies of society. A common emotional struggle that child abuse survivors describe is the feeling that they remain trapped between worlds, forced to grow up too quickly but never having experienced a real childhood. An undead Jason serves as a fantastic visual metaphor for this.

This reading even goes some way towards explaining why he looks the way he does—he’s no longer a human but an approximation of one—a child’s exaggerated idea of adulthood manifested in death: giant and super-strong, his grotesque appearance informed by his perception of the abusive adults around him. It also explains why he has such a bone to pick with any young, beautiful, sexually active person—he’ll never grow up, hang out with friends, fall in love, or enjoy any youthful rites of passage. If you were a pubescent child trapped in the rotting corpse of an adult, watching beautiful young people callously partying at the spot where you died, you’d be pretty pissed, too.

It’s a nice, unifying take on things that the creators should’ve run with. It delineates him from all the other slashers, and gives him a unique origin story. Unfortunately, Jason Goes to Hell was more Jason Rips off The Hidden, introducing some stuff about demon worms (because you can totally picture Mrs. Voorhees as a devil worshipper), while Jason X decided to inject its own confusing take on things with something about regenerative powers (to say nothing of the nanites. Those fuckin’ nanites). Then, of course, the reboot went the route of giving us a totally human, totally living Jason; and while it goes some way towards cleaning up the continuity, it also strips Jason of some of the grandeur he could have had. (Judging by the huge pot field that he’s so protective of, this Jason also tokes, which, theoretically, should make him the mellowest Jason. He is not; although Jason Takes a Hit should be up for consideration as the next film in the franchise).

As of now, the future of the series is (still) up in the air, and at this point it’s looking like we’ll find a successful vaccine/cure for COVID-19 before the rights issues are settled and we get another entry. Hopefully, if/when the series gets back off the ground, the writers will take a nod from McLoughlin and give us a Jason who’s undead, pissed, and tragic.

*You better believe if I ever get my shot at this franchise, we’re finding out whatever happened to the original counselors. They’ve got a lot to answer for.

‍Preston Fassel is an award-winning author and journalist whose work has appeared in FANGORIA, Rue Morgue Magazine, Screem Magazine, and on Cinedump.com. He is the author of "Remembering Vanessa," the first published biography of British horror star Vanessa Howard, printed in the Spring 2014 issue of Screem Magazine. From 2015 to 2017, he served as the assistant editor of Cinedump.com. Since 2018, he has served as staff writer for FANGORIA magazine. His first novel, Our Lady of the Inferno, was the recipient of the Independent Publisher Book Award for Horror and was named one of Bloody Disgusting's 10 Best Horror Books of 2018. Twitter: @PrestonFassel