This version delivers horror and a palpable shittiness to old Ebenezer. 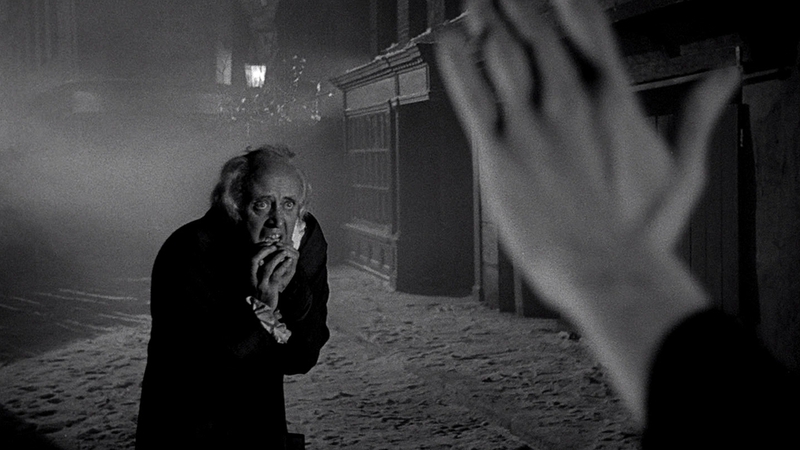 "I wear the chain I forged in life! I made it link by link and yard by yard! I gartered it on of my own free will and by my own free will, I wore it!"- Jacob Marley, A Christmas Carol (1951)

"Oh, this is too scary! I don't think I wanna see anymore!"- Rizzo the Rat, A Muppet Christmas Carol

Decades ago, one of my parents received a copy of the film A Christmas Carol during one of those "Secret Santa" events workplaces have been doing since time out of mind. Usually, you walk away from these things with a tea cozy or a gift certificate to the Jam of the Month Club, so the fact that it ended with a shiny new DVD (we had just made the transition over to the new media format the year previous, which should give you an idea of how decrepit I am) was cause for celebration. I remember excitedly popping the disc into our player - the novelty of which still hadn't left me - and us all settling down in front of the tube for an evening of sickeningly wholesome holiday fun.

What we got instead was something completely unexpected: a darker telling of the well-known story, featuring an uncommonly menacing Scrooge alongside a few genuinely frightening moments that gave even my horror-hardened nerves a jolt. We were watching the 1951 release of the Charles Dickens tale, a take on the classic that I still include yearly in my watch list of holiday fright films. While it may seem tame when in the company of edgier fare like Krampus, Black Christmas, or even Gremlins, this iteration of Ebenezer's self-reflective journey to redemption brings the spooky goods when it needs to and understands above all what it is at its core: a ghost story.

The majority of us know A Christmas Carol's narrative, (the 177-year-old novella has been adapted for film alone almost 50 times, meaning Scrooge is practically written into the DNA of pop culture) but here's the gist of it for the uninitiated: a greedy old man who places money above everything else in life is visited by the ghost of a former business partner on Christmas Eve. The wailing specter informs him that three spirits will visit him during the course of the night and that if he does not change his ways, he will be condemned to an afterlife of loneliness and misery.

It's safe to say that A Christmas Carol's story has lost a bit of its bite over the years, thanks in large part to both overfamiliarity and the softening of its characters in more family-friendly iterations (I mean, let's face it: it's hard to keep your edge when there's a version of your story featuring the Muppets as its cast). Which is why I find this 1951 adaptation so refreshing and deceptively modern: it has a perfect balance of darkness and light. Director Brian Desmond Hurst and screenwriter Noel Langley (who some may recognize as one of the scribes credited on The Wizard of Oz) understood that in order for Scrooge's metamorphosis by the film's end to truly hit emotionally, we need to find him completely unrecognizable from the man we first meet. The warmth and kindness radiating from him later on, needs to be just as bewildering to the audience as it is for his peers when they encounter him on Christmas morning, and in order for that to happen, the initial shittiness of old Ebenezer needs to be palpable. 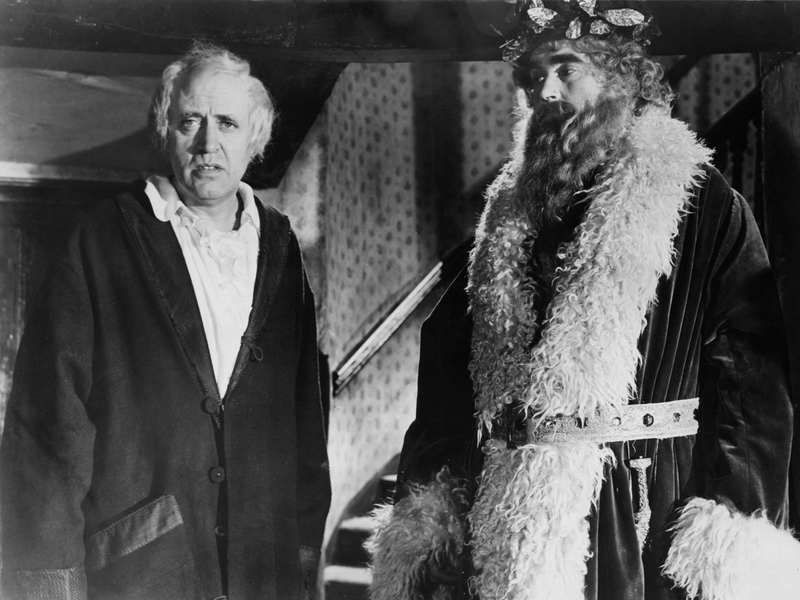 And boy, is it ever! The notoriously prickly Scottish actor Alastair Sim (An Inspector Calls) brings out the bastard in Scrooge with a vigor few actors have matched since. This is not some grumpy old man mumbling "humbug" under his breath; this is a beady-eyed, conniving, heartless wretch posing as a human being. Sim's delivery as he launches verbal assaults at a group of orphaned children in front of his business, declares Christmas "a poor excuse for picking a man's pocket every 25th of December," and floats out prisons and workhouses as a solution to homelessness is all the more unpleasant thanks to the glint of glee in his eyes.

Then there are the scares.

A Christmas Carol isn't packed wall to wall with frights by any means, but this adaptation's spookier instances are so effective that they still stand up today 70 years after its release. Michael Hordern (Watership Down, Where Eagles Dare) lends a volatility to the character of Jacob Marley that simmers under the surface until it boils over in terrifying fashion minutes into his encounter with Scrooge. As his former business associate attempts to dismiss him as a piece of undigested beef from that evening's supper, Marley leaps to his feet, and an agonized screech erupts from him while he rattles the length of heavy chains that cling to him. 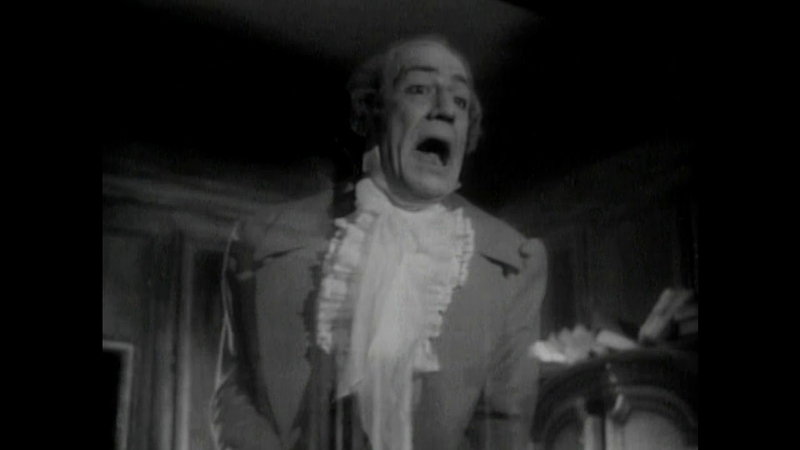 It's a startling moment (I can still see my mother's hands shooting up to cover her ears during it, something she always does during particularly tense movie scenes), and it's all the more affecting because of Marley's tangible desperation. Hordern gets across terrifyingly well how truly agonizing the spirit's personal hell is and the guilt he is doomed to grapple with eternally. You can't help but feel his regret in the pit of your stomach when he wails, "BUSINESS!? Mankind was my business! Their common welfare was my business! And it is at this time of the rolling year that I suffer most!"

Closely following those lines is perhaps the film's most haunting image, one that has stayed with me for years since that first viewing. To emphasize to Scrooge what awaits him if he does not open his heart to the experiences he's about to have that evening, Marley leads him to a window that overlooks the street outside Ebenezer's home. There, in a mound of snow, they see a mother cradling her infant child. Unbeknownst to her, she is surrounded by dozens of writhing spirits, all trying to reach out and make contact in a futile attempt to save them from their freezing ordeal.

"They seek to interfere for good in human matters and have lost their power forever," says Marley. As Scrooge stares in shock at the horrible tableau before him, his friend's ghost joins the ranks of the dead who want so desperately to make amends for their past selfishness but must live with the consequences of their actions for eternity. It was a damn heavy sight to see in what we were expecting to be standard happy holiday film fare, and I'll never forget how it sucked the air out of the room that night as my family and I watched. 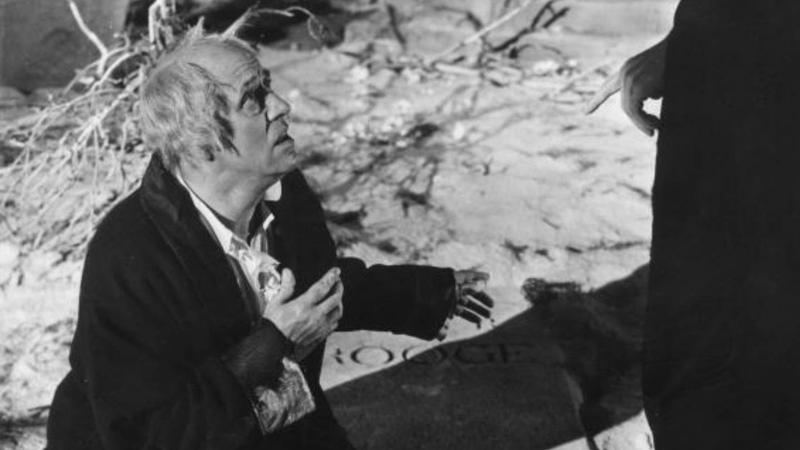 In the end, Scrooge's eventual change of heart feels more like a miracle than a tired story beat. But if the optimism and hope that washes over A Christmas Carol's final scenes due to that transformation intoxicate, then those feelings are owed in large part to the darkness shown previously. The warmth of its finale is far more palpable, thanks to the chills that came before it. Maybe those flashes of horror were the reason my family never sat down together to watch it again, but they're exactly why it's become a staple for me.