SATAN'S SERVANT: The Horror Film Made By Teens For $2000

While their peers are making 30-second TikToks, these 18-year-olds just dropped their first feature on streaming. 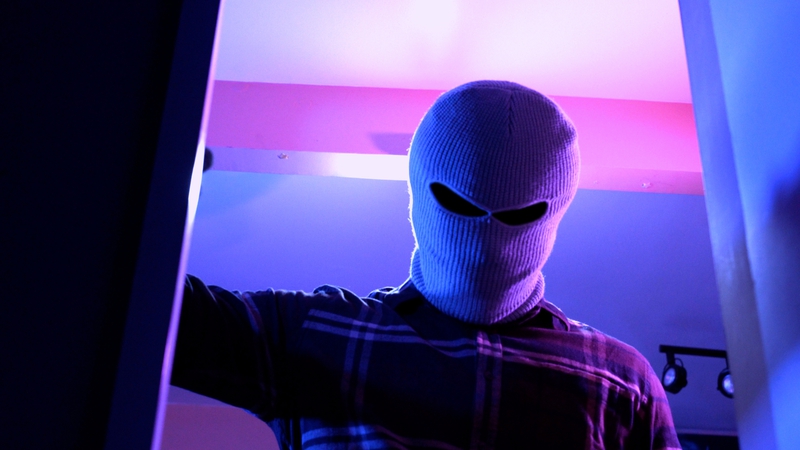 The Devil's Butcher in SATAN'S SERVANT.

About a month ago, I got an email from an 18-year-old young man named Jack McDermott. Jack and his friend Ethan Gomez Zahnley had just spent a chunk of the pandemic making a horror feature called Satan’s Servant, and they really wanted me to watch it. I was really charmed by their approach and, thinking back to my teen days of wanting to make horror movies with my pals, popped some popcorn and pressed play on the link Jack sent me. And I really enjoyed it! Their film, following a group of suburban teens who stumble upon a murderous plot by neighborhood parents who've converted to Satanism ("and not the hipster freedom-of-religion kind"), is surprisingly polished, has a scrappy DIY energy to it, and legitimately has its own, often hilarious voice. I told Jack and Ethan to let Fango know how we can help spread the word.

That day is upon us, as Satan’s Servant is available for rental or purchase today (links at bottom of page). We’ve got an exclusive clip to share, as well as a Q&A with Jack below. I found him to be an inspiring and enterprising young talent, and if Satan’s Servant is what he and Ethan can do out of the gate, during a pandemic, with a budget of $2000, I cannot wait to see what they grow into from here. 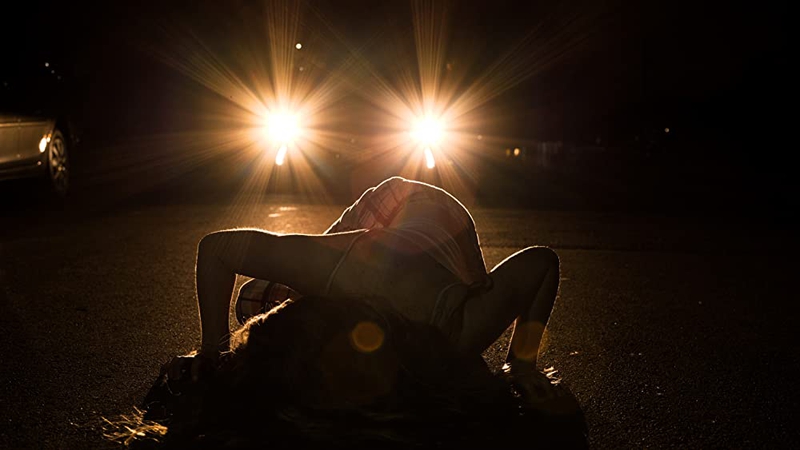 How did you get into horror?

A big influence on my love of horror was my local Alamo Drafthouse. It's about 40-minutes from my house but their selection of horror films (and the ways they described them) had me making that trip as much as possible. They showed me the wide spectrum of films that fall under the genre of horror.

Around the beginning of high school, I also began making short horror films with my friends under the banner Screenager Productions and realized how fun it is to make horror movies. I loved trying to figure out how to make the coolest, goriest kills with just the stuff lying around at home. As my team grew, we learned that horror is a genre that is quite forgiving to low budgets, which made it our go-to. However, it wasn't until the pandemic that I fell in love with horror cinema. At that time, my schoolwork had really slowed down so I got a Shudder subscription and began watching a horror movie almost every day. I fell in love with films by Dario Argento, Stuart Gordon, and John Carpenter. Their films were my favorites because they were super entertaining but also inspiring. I would watch them and try to figure out how they filmed each kill scene and think about how I could try to do it on my own. After a few weeks of daily horror movies, I began writing Satan's Servant.

Lots of people from your generation have gravitated to short-form content on YouTube and TikTok. It's easier to digest, cheaper to make, and arguably more popular with Gen Z. What made you and Ethan decide to attempt an entire feature?

A couple of years back, we'd made a mockumentary mini-series titled American Rhapsody that was about 50-minutes long in total. It turned out surprisingly well considering we didn't have a script, but it was lacking in some technical areas. Right before the pandemic, Sean Okimoto, my best friend since preschool (he plays Tyler in the movie), came up to me at school and asked, "So when are we doing another big project like American Rhapsody?" At that time, I didn't have an answer but once the pandemic began, I decided to spend my newfound free time writing a feature film that we could make once the pandemic subsided. Ethan and I both initially viewed this as a practice feature film where we would use this low-stakes production as a learning experience. However, after eight months of pre-production, we realized that this movie could turn out much better than we had anticipated, and the idea of it being a practice feature faded away.

When we hear “film made by teens for $2000,” we’re expecting a lot of shaky handheld iPhone camerawork, which you absolutely do not have in this film. It's pretty polished. Talk to me about some of the technical challenges and how you met them.

Shaky camera work has definitely been a problem with some of our older films but we filmed Satan’s Servant almost entirely with our camera (a Sony A7SII) on a gimbal to avoid that. A big technical challenge was lighting since most of the film was set at night and we couldn't afford any big lights. We ended up buying three Aputure MC's which are these little pocket-sized wireless lights that were powerful enough to light our actors from a short distance.

Pretty much all of our problems came from our budgetary constraints since most of our budget was going towards feeding the crew. One of the main ways we got around this problem was with the script. When I was writing it, I made a conscious effort to string together a story that involved the locations and props we had access to (or could get for cheap). That's why most of the film is set at people's houses. Another big challenge was designing the Devil's Butcher since we wanted to have a menacing, supernatural villain but we knew we wouldn't be able to execute any complicated VFX. We ended up having his costume be 90% practical; the only VFX would be digitally removing his eyes, which I knew that I could do.

What did you think you would be able to bring to this genre that you didn't see already happening?

One of our main goals with this film was to make a horror film featuring teenagers that we could relate to. That meant having teen characters that are actually played by teenagers, talk like teenagers, and interact with technology like teenagers. It seems like a lot of genre films featuring young ensembles are set in the past since that's when the filmmakers were teens, so we were excited to do one that was set in the present and in a world that feels familiar to us. We also felt that since we were trying to make this world feel realistic, certain slasher tropes wouldn't fit as well. For instance, we wanted to keep the characters grounded by highlighting the guilt felt by the survivors. I also chose to focus more on fleshing out the characters than having massive twists, since having characters that people care about leads to a bigger impact when they get decapitated.

My favorite part of the movie is the comedic beats between Tyler (Sean Okimoto) and James (Carlos Noreña). Okimoto in particular is hilarious with his delivery. How did you know they'd be able to carry a whole film?

Sean has been acting (and composing music) for my films since 8th grade. I wrote the role of Tyler specifically for him and he really stepped up to the plate since this was by far the most dialogue he'd ever had to learn. Carlos has been a friend of ours throughout high school, and whenever we'd worked together on previous projects he always showed up incredibly prepared and totally understood the character. We thought that they were going to do well in the roles but they blew us away with their chemistry and improvised body language. Neither of them is planning to pursue acting professionally (Sean is planning to major in Psychology and Carlos will major in Nuclear Physics), but they really brought it for this film.

What was the budget on the film? I saw a crowdfunding page where you raised $1500.

That fundraiser got us $1,000 since we donated about $500 of that to the Equal Justice Initiative. Then, Sean, Ethan, and I each pitched in a bit and bringing us to a production budget of $2,000 with a few hundred extra for promotion. However, we were able to stretch the budget by calling in a lot of favors on this production and found that both friends and strangers were quite eager to support us in this endeavor.

This movie presents parents as suspect and not trustworthy, yet in all likelihood you really needed the help of adults to help pull this off. Were they cool making a movie where their generation are either ineffectual or the bad guys?

Our parents were all surprisingly okay with it and really did help out a lot with the production. If you look through the credits you'll notice the same last names popping up a bunch. It wasn't a conscious decision to portray every adult in the movie negatively, but we definitely wanted this film to highlight that our generation is capable of a lot more than people might think.

What's next for you guys? Do you want to stay in horror or are you looking to branch into other genres?

I definitely want to continue making horror movies since they are so creatively exciting and the horror community has been so incredible to get to know and become a part of. I'm currently developing a new film that's a summer camp slasher with a bit of a twist but before I can get too serious about that, I'm gonna be attending Loyola Marymount University as a Film Production major. Ethan will be attending UC Santa Barbara and is also majoring in film. He too plans to continue making horror movies but also hopes to branch out into other genres. With our whole team spreading apart for college, it's hard to predict what will happen to Screenager Productions since each member of the cast and crew was so crucial to making this movie work, but we plan to reunite down the road (maybe for Satan's Servant 2?).

Satan’s Servant is now available to rent or purchase on Amazon. Outside the US, it can be viewed here. The filmmakers will be donating 15% of the film's earnings to the Equal Justice Initiative. Follow the filmmakers on Instagram for more! 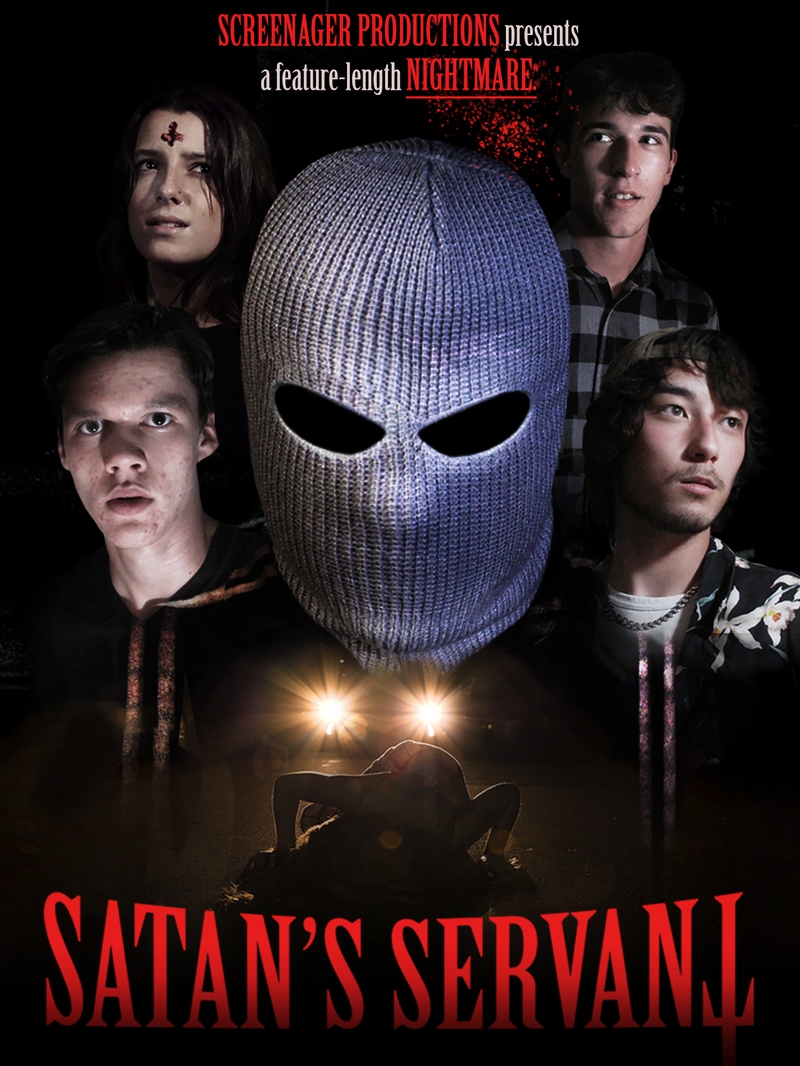