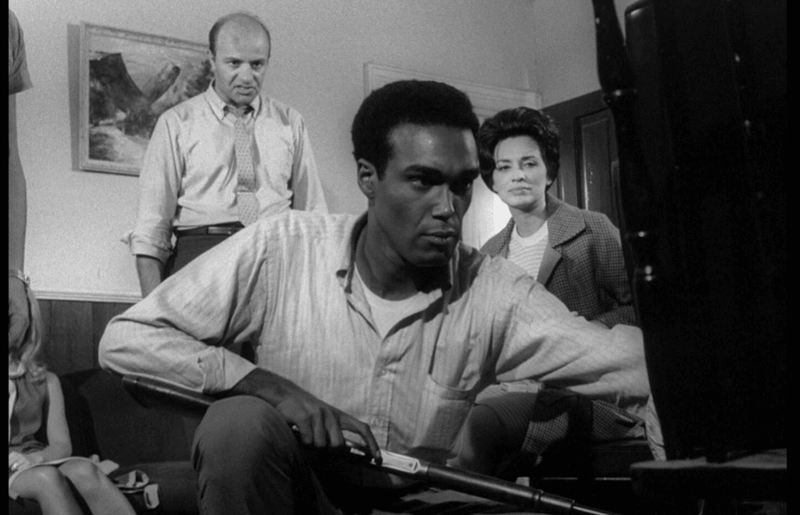 In the 1940s and 1950s, post-war horror tended to come in one of two flavors. There were the overtly psychological horror films - terrifying glimpses into our own selves and the darkness we were apt to find there. This was the purview of Val Lewton, Henri-Georges Clouzot and of course Alfred Hitchcock. With their chilling explorations of the human psyche, they created the seeds for much of the modern horror to follow, democratizing fright and showing us that we were all capable of committing unspeakable evil. It’s not a big reach to understand why such a narrative preoccupation would germinate and flourish in the shadow of World War II.

The other horror trend that picked up steam in the wake of the Second World War was the attack of the Other: The Thing From Another World, Them!, It Came From Outer Space. The threat was coming from outside the house, and each of these films showed the battle-tested machine of AMERICA holding its ground and defeating the Other.

This was a format that existed for a solid decade and change, but in 1968 George Romero smashed that psychological chocolate into that jingoistic peanut butter and showed us that when confronted with an outside threat, not only will our personal failings and capacity for evil be the engines of our own ruin (and 2021 has certainly revealed that to be an authentic plot point), but the rock-solid institutions that kept the invaders at bay were little more than myth. The survivors inside that farmhouse in Night of the Living Dead had (through bickering, lack of cooperation, and GUNS) already done much of the damage themselves, but they were finished off by the system that was supposed to protect them. The cavalry came over the hill to the rescue...and put a bullet in the head of the last man standing.

Romero expanded on the theme in Dawn of the Dead, throwing us in media res into a scene in which the infrastructure is well on its way to collapsing: a SWAT team (with “a few bad apples,” as contemporary politicians like to say) shoots up a tenement full of minorities with no regard for who’s a zombie or not; the residents of that building, unwilling to cooperate with CDC mandates and distrustful of government (mind, Dawn was filmed six years after the public revelation of the Tuskegee Experiment), have allowed the zombie outbreak to thrive in their basement; and the local TV station is knowingly broadcasting defunct shelter locations, nonchalantly sending people to their deaths, lest viewers change the channel. From the opening credits, the protagonists know that these institutions will not protect them, and that they need to flee the big cities, areas where things will go most wrong. “If it’s anything like Philly we may never get out alive,” as one character says (somewhat prophetically: six years after Dawn, Philly police would settle a standoff with a local black activist group by dropping a bomb on the group’s home, killing six adults and five children, and burning down over 60 nearby homes).

By the time we get to Day of the Dead, the broken infrastructure is all that’s left, with beleaguered scientists watching consequence-free military personnel threatening to kill civilians and arguing in an underground bunker over a battle plan in a war that’s long been lost. (Romero’s Land of the Dead, which depicts one-per-centers paying for the privilege of ignoring the plague outside their front door, buying their way into a gated community where they can still enjoy shopping and patio dining during the apocalypse, is at this point worthy of its own 2021 reassessment.) Ineffectual bureaucracy and shady leaders who don’t have our best interests in mind are of course not relegated to Romero; they’re a crucial plot element in everything from Jaws on down. But it’s remarkable that Romero made various disparate scenarios work as a whole to illustrate what we now know is a core truth, and one that many viewers found to be the least plausible element in his zombie canon: when the shit hits the fan, we are terrifyingly, sometimes fatally on our own.

The tagline of Day of the Dead (according to IMDB; I can’t find it on a trailer or poster at the moment) was “Prepare yourself for the darkest day of horror the world has ever known!” And it’s been ringing in my head lately. Prepare yourself. Horror has been telling us to prepare ourselves for years. It’s been warning us that this system, this infrastructure, will not save us, or protect us, or even consider us. We’ve all spent a year finding out the hard way that Romero was right.

This was originally published in FANGORIA's email newsletter, The Terror Teletype. Subscribe here!