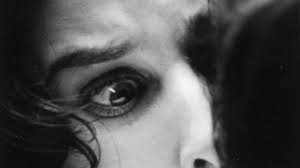 The following contains spoilers about Alison Maclean’s 1989 short film Kitchen Sink but – yippee! – you can view the short film here on YouTube before you read further.

It could just be me being an enormous weirdo, but I suspect I am not the only giant horror nerd who likes to keep a few legitimizing anecdotal tricks up my sleeve to woo less genre-inclined people to horror film when this dark obsession almost inevitably comes up in those everyday social encounters with the non-horror aligned whom we seemingly can never escape (try as we may). My pet favorite "fun fact" to pull out at barbeques is Alison Maclean’s 1989 short film Kitchen Sink, and I suspect through it I have converted more than a handful of people to our spooky cause.

“Did you know,” I drop into conversation with that undeniably over-rehearsed air of casualness only the truly socially anxious will understand, “that the director of Natalie Imbruglia’s iconic Torn music video got her big career break with a surreal horror short that played at the Cannes Film Festival?”. Once we go through the seemingly obligatory debates about how to pronounce “Imbruglia” (Imbroogleah? Imbroglio? Imbraghoulia?), almost like clockwork conversation turns to that music video, that song. And, inevitably, how straight-up wackadoodle it is that something so utterly pure could have possibly have come from the mind of a director who had anything to do with a genre as unwholesome as... ew... horror.

Hearing Maclean talk about Torn, however, we start to get the inkling that she didn’t totally desert her love of the dark and twisted that marked not just Kitchen Sink, but her controversial (and almost indescribably brilliant) 1992 debut feature, Crush. The premise of the Torn video is as simple as it is elegant: across its four-minute run time, Maclean intercuts footage of the singer's desperately earnest performance of the song to-camera with a crew in the background dismantling the set behind the singer and actor Jeremy Sheffield rehearsing a vague, melodramatically overwrought love scene. What we don’t know from the video, but that Maclean has revealed in interviews, however, is that the scene they are performing is one that Maclean herself wrote – an adaptation, no less, of one taken from Bernardo Bertolucci's notorious Last Tango in Paris (1972).

So even incorporating the music video for Torn – arguably Maclean’s most famous if not widely seen film work – we suddenly begin to see a through-line developing in the director’s filmography that reveals a taste for the dark and twisted. When it comes to Kitchen Sink, that Maclean’s Criterion Top 10 from 2017 included both Chris Marker’s La Jetee (1962) and David Lynch’s Mulholland Dr. (2001) further reveal that her own tastes and predilections lie quite nicely on the weird and dark side of town, and certainly in this early, hugely successful short we can see how a similar sensibility manifests in her own unique vision.

Kitchen Sink is a banger; it’s dark as hell and weird as fuck, just the way we like it. The film begins as her untitled woman protagonist (Theresa Healey) is engaged in the banal rituals of domesticated femininity: house cleaning. That ubiquitous experience of seeing something tiny yet gross poking out of the sink sparks the film’s actions, the thread turning into a rope, turning into an umbilical cord that births a peculiar fetus-like blob.

Disgusted at first and hurling it into the trash, she rethinks her actions and, following the familiar domestic instructions any housewife would know – just add water! – the strange human-like blob transforms in the bathtub into a fully grown yet strangely hirsute adult human male (Peter Tait). With a giallo-like straight razor, she carefully shaves the beast (a King Kong poster carefully placed in the background earlier in the film makes sure we get the reference of humanizing the animal), and to our protagonist’s surprise as much as ours, she discovers her sink beast is in fact the perfect new lover. Nothing lasts forever, of course, and just as strangely as he appears, he unravels – quite literally – before her.

Maclean was born in Canada and now lives in New York, but Kitchen Sink was made when she was living in New Zealand, where she was raised. In her director’s statement at the New Zealand Film Commission, she wrote of the film, "The story came to me in much the same way as events unfold for the woman in the film. I could see this hair sticking out of the plughole and on closer inspection, the story began to emerge and to transform itself in quite a surprising way.” Maclean continued, “It's a dark little fable about fear and desire – about a woman who re-fashions a monster into a man, and finds herself falling for her creation. In some sense I see it as a Pygmalion-type story, with the genders reversed." Elsewhere, academic Liz Faber has suggested the film is "what Frankenstein might have been if [Mary] Shelley had told it today, from a woman's perspective."

I’m going to hazard a guess that to viewers new to this film, that old cliched chestnut “Lynchian” may find itself front and center, but I am going to go out on a limb and argue instead that Kitchen Sink is above all else fundamentally Macleanian. Certainly the programming committee at the Cannes Film Festival were convinced of its originality, not to mention the other notable international film festivals where the film was played which transcended the art film circuit into more familiar genre territory, playing at fests including both Sitges and Fantasporto.

Kitchen Sink is a treasure, a gift to share amongst friends who are blessed enough to be discovering it for the first time. I legitimately cannot begin to count how many times I have seen Kitchen Sink, and it is one of those rare films that the more I watch it the less I understand it, which is an extraordinarily bewildering and yet quite wonderful sensation. I have, over the years since I first saw it, shifted away from trying to engage with the film on a purely intellectual level and moving towards what I increasingly feel is baked into its very textures: Kitchen Sink primarily demands a sensory experience rather than a more rational or analytical one.

That sense of tugging on a frayed rope, the sharp drag of a straight razor on skin, the smell of hair, the touch of skin, that almost irrational impulse to pull at a loose thread… these are the things that most immediately leap to my mind when I think of the film today rather than the more orthodox privileging of narrative (“this happened and then this happened and then this happened”). Kitchen Sink is a film we feel as much as logically make sense of, one of the many elements that has made it such an enduring and enigmatic masterpiece of women’s horror filmmaking that simply every self-respecting horror fan should know.