The Lady of the Woods 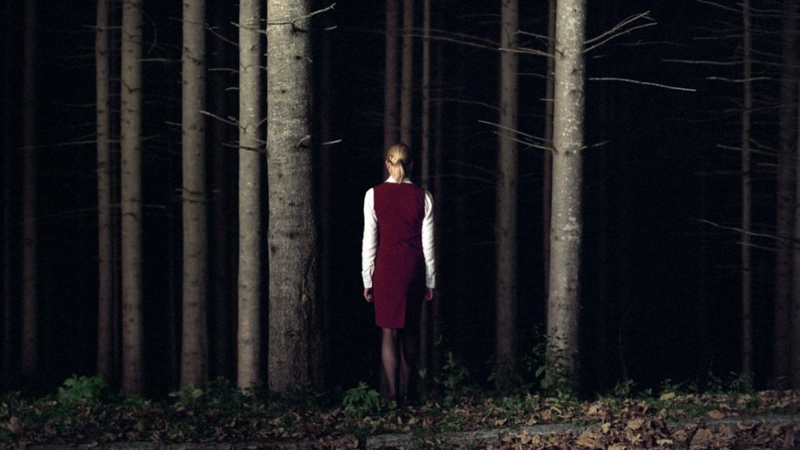 There's a bad habit in film marketing where highbrow art films with undeniable horror themes more often sweep the word "horror" itself under the carpet in order to not put off the bourgeois purveyors of the high arts that they see as a more discerning consumer of their product than we dirtbag, genre-loving riff-raff. But run from the word as they may, they can't hide: we will find these dark-themed, spooky films, no matter how much you try to get us off your scent!

Exhibit A: Jessica Hausner's 2004 feature, Hotel. Now don't get me wrong, if you define horror as a movie constructed from a string of jump scares and a CGI monster whose convincingness ranges in technical quality, I can very confidently say this film is not for you. This is not a popcorn horror movie. This is not a film to drink beer with your mates for shits and giggles with in search of rowdy fun. This is a quiet film - and a very deliberately slow one - where the question is not 'when does it show its hand?' but rather 'does it show its hand at all? Does it have hands? What is a hand?'. The first time I saw this film, I wasn't expecting it to fall anywhere near my horror interests, but the more I watch it - and I watch it a lot, drawn back to it almost compulsively like a moth to a flame - I find that I am leaning in more and more aggressively to it as perhaps not a typical horror film, but a horror-adjacent film at the very least, regardless.

Hotel is a film whose impact lies in what it leaves out rather than what it includes. And I don't mean this in the usual way that we do when we talk about horror; if it is a case of only implying what the menace or threat or disturbance is rather than revealing it in all its glory, this film takes that idea to an extreme where it can somewhat disingenuously deny even being a capital-H "Horror" film at all. And there are, as suggested, probably very practical reasons for that; promoted as a "drama", Hotel was included in the 2004 Un Certain Regard section at the Cannes Film Festival, which while not totally horror-phobic of course, is perhaps obviously more likely to welcome films that fit more readily with the broader Cannes brand. Keep in mind, it would take another 17 years for a more overt woman-directed horror film - Julia Ducournau's Titane - to win the Palme d'Or, only the second woman ever to win that prize at Cannes after Jane Campion and The Piano in 1993.

Hausner, of course, is no stranger to genre, and has increasingly flourished in it, most recently with her straight-up brilliant 2019 sci-fi film Little Joe, a sort of Invasion of the Body Snatchers meets Little Shop of Horrors themed meditation on the antidepressant sector of the pharmaceutical industry and the broader cultural fetishization of 'happiness' as a shallow, marketable ideal. Shot in an exquisite primary colour palette by Hausner's frequent collaborator cinematographer Martin Gschlacht (who also lensed Hotel), Little Joe was not just in competition for the 2019 Palme d'Or at Cannes, but it was at this festival that Emily Beecham won the prize for Best Actress. It's probably also worth flagging that Hausner is no stranger to Cannes and these two films are hardly anomalies in her filmography; Lovely Rita played in the Un Certain Regard programme in 2001, as did her 2014 film Amour Fou, while her movie Lourdes won the Vienna Prize for Best Film at the Venice International Film Festival in 2009.

To put it mildly, then, Hotel is not your usual genre film, and Hausner is not your usual genre filmmaker. Rather, she does something that I personally adore in a director's work: she understands the mechanics of horror, and uses it as a tool to develop her own vision her own way. She uses genre as a loose scaffolding rather than a regimented, colour-by-numbers framework, which allows her extraordinary creative freedom to make the kinds of movies that have made her such an interesting and diverse filmmaker. To a skeptic, Hotel might not tick all of the obvious boxes of what makes a horror film a horror film, but for me, it's precisely this instability that makes it so unsettling and so fascinating to watch from the perspective of a horror fan. 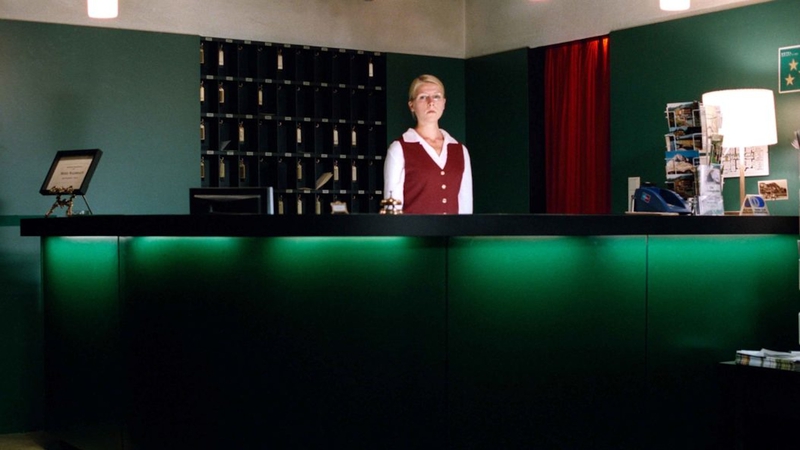 The film begins with a classic example of Gschlacht's signature static cinematography that often feels as much like a still photo as it does a moving image. It's a disorienting image, and it takes a moment to click. Our protagonist Irene (Franziska Weisz) stands below what we now understand is the roof of a wood-paneled elevator; she is being taken on the token first-day-of-work tour by one of the upper management at the rural Austrian resort she now works at as a receptionist. It is a formal situation, and there is an awkward obedience in her presentation. But even in this very first moment, we understand that the pleasant world the hotel of the title offers is a facade with something much more chaotic underneath; the speaker we see embedded in the ceiling is playing soothing muzak, but there's something wrong. The music keeps distorting, crackling, and ultimately, it's the opposite of soothing - it reveals the shallow facade of pleasantness for exactly what it is.

Along with Irene, we learn many things about the hotel as our introduction continues. The basement door, we are told, must always be locked because "the devil never sleeps." Superficially obedient, the devil appears not to bother Irene, who throughout the film will use this same door to sneak outside for quick cigarette breaks. We also learn her predecessor left the job without explanation or notice, and that the people she works with are cagey, unfriendly, and stand-offish. The drawcard to the area, we discover, are the beautiful surroundings; the lush forest, the exquisite nearby valley, and the local tourist attraction: a cave shrouded in mystery labeled by the locals as "The Devil's Cave." The legend surrounds the so-called Lady of the Woods, who was accused of witchcraft and burned at the stake in 1591. In more recent years, strange disappearances added to the cave's mystique, and visitors to the hotel are encouraged to visit it for a pleasant day's hiking trip.

But these things lie on the outskirts of Irene's experiences in her new job. Highlighted by the cinematography and the slow pacing of the editing, we are constantly reminded that this bustling public space is also at times eerily bereft of human presence in a number of shots that are memorable - and unsettling - for precisely indicating people should be there, but are not. Rather than pointing to anything particularly suspicious about that, Hausner is more concerned with Irene's growing yet carefully repressed experience of isolation at the hotel, and we see this in the numerous carefully framed shots of empty spaces.

Irene does her best; she attempts a friendship with her colleague Petra (Birgit Minichmayr) and even a fledgling romance with local man Erik (Christopher Schärf). She works, she sleeps, she swims, she walks; things are functional for Irene until they are not.

Hotel is by no stretch a typical horror film and absolutely does not offer a typical horror film experience, but it is one that the more I watch it, the genuinely more terrifying I find it. This is a haunting film about labor, obedience, the invisible presence of passive-aggressiveness as a form of violence, and that odd, intangible spirit of being aware that other people long gone once worked where you now work - that intangible presence of workplace ghosts.