Learning How to Fly. 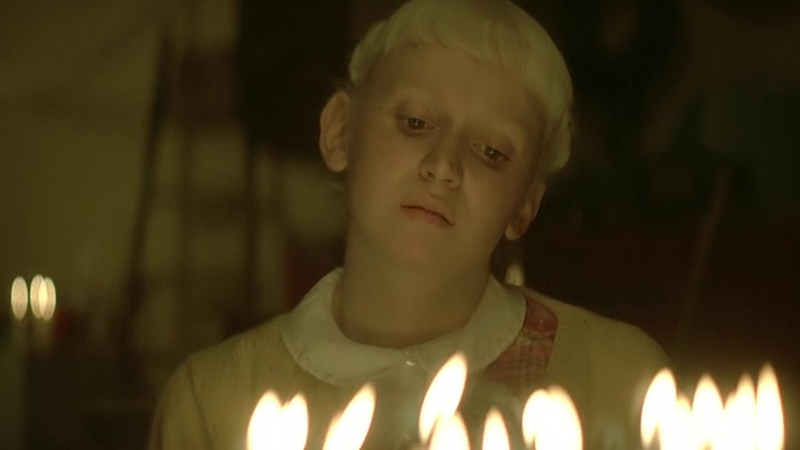 The figure of the babysitter sits in a liminal, transformational, and often quite volatile space between being a surrogate mother/caretaker figure and being a child themselves. Babysitting is a typically gendered role, the stereotypical image presented in screen culture with teenage girls or young women. In horror, the role of the babysitter is a frequently fraught one, ranging from the Final Girls played by Carol Kane in Fred Walton's When a Stranger Calls (1979) or Jamie Lee Curtis in John Carpenter's Halloween (1978) right through to the other extreme of the 'evil' babysitter, such as recent popular manifestations including Joseph McGinty Nichol's The Babysitter (2017) with Samara Weaving and Emelie (2015), starring Sarah Bolger.

The title character of Agnès Merlet's Dorothy Mills is played by Jenn Murray - who won an Irish Film & Television Academy award for her performance - and riffs explicitly on this later manifestation; the figure of the corrupt/violent/malign babysitter. The film's action begins very early with an intricately and carefully shot scene showing the young Dorothy's violence against the baby that has been left in her care. Even before the film begins and we are to meet Dorothy properly, the nature of this particular crime remains deliberately ambiguous, referred to as both "abuse" and "molestation." There's an implication that there is a sexual nature to the crime, but we never get the details of what they might be. However, what is more apparent is that whatever Dorothy has done is very, very serious. We hear the baby's screams, and we see the look of shock on the child's parents' faces as they grab the swaddled infant from Dorothy, looking at what lies within the blanket with undisguised horror.

The film follows Jane (Carice van Houten), a visiting psychiatrist's visit to the small, bleak island community where this action has taken place to investigate the matter and form a report on Dorothy for official purposes as officials decide what to do with her. Jane has her own traumatic background to contend with, but our connection with Jane is largely predicated on our shared predicament in that neither of us really feel we get to know Dorothy properly until the film unfolds, revealing the girl's secrets. But the secrets are not Dorothy's alone; the community in which the film is set is superficially a god fearing one, but the deeper Jane (and we) immerse ourselves within this world, the more we discover that the levels of godliness in deed as much as word leave much to be desired.

Merlet is a French filmmaker who both wrote and directed Dorothy Mills. To date, this is one of four feature films she has helmed as director including her award-winning coming-of-age film about two troubled young French boys in Son of the Shark (1993), her loose 'biopic' on the famous woman 19th century Italian painter Artemisia Gentileschi, Artemisia (1997), and, most recently, the supernatural thriller Hideaways with Rachel Hurd-Wood (2011). Dorothy Mills brings to the fore a variety of threads we can see elsewhere in Merlet's work; distressed youth, dysfunctional societies, and a tendency to experiment with different genres, weaving them together to make her own unique vision come to life.

In the case of Dorothy Mills, how this manifests is hard to miss; every time you think you can lock this film down to a recognizable singular subgenre, it shifts gears in a way that some critics dismissed as flighty, but for me was genuinely exciting. This indicates a real agility in the filmmaker's understanding of how genres work on a mechanical level. The thrill of this film is how these different subgeneric threads almost congeal into a wholly uncomfortable bad vibe jelly; to name these subgenres would concretely enter spoiler land, however, as part of the experience of Dorothy Mills is the emotional and intellectual whiplash we experience when we're just about to dismiss Merlet as being predictable, and she takes a sharp turn towards somewhere we might never have expected.

The different subgeneric threads in Dorothy Mills made it a slippery film for critics to feel they could get a handle on, which sadly (and in my mind, quite unfairly) saw it shoehorned into descriptors that were wholly unrepresentative of what Merlet was seeking to do with the film. Most famously, perhaps, is a quote from Variety that was emblazoned across the top of the 2009 DVD release, calling the movie "a contemporary take on The Exorcist." Being generous, while I can see how there might be some very thin links there that hold water, this is less a case of an apt descriptor as it is more likely a desperate publicist trying to figure out how the hell to sell a film with so many different moving parts. To say the least, this quote is far from representative of this film, but this is not to say there are no concrete references to great movies in there - I won't name them as that will give too much away, but one is a cult film from 1962 and the other, an Oscar-winning psychological thriller from 1957.

Beautifully shot by prolific Greek cinematographer Giorgos Arvanitis (a regular collaborator of Catherine Breillat, the DP behind her movies Romance, Fat Girl, Anatomy Hell, and The Last Mistress), Dorothy Mills is all about secrets, things long buried, and the inability to 'see' people for who they really are. This is, in formal terms, often communicated visually in relation to women who either cannot see or are unable to see, where vision is consciously hindered. A small but curious character is an older blind woman, and there are many shots of women behind glass that in some way distorts both the ability of women to see through these windows, while simultaneously corrupting the image of them we see through the glass:

Most opaque, of course, is the image of Dorothy herself. For much of the earlier part of the film, we quite literally hardly see her at all. When we finally do, along with Jane's role as her assessing psychiatrist, the challenge is how do we construct a conceptual framework to 'see' (or at least understand) Dorothy at all when she is - for reasons the film slowly reveals - become increasingly complex. We are presented with a doll-like little girl who lives in a house that resembles the dollhouse in her very bedroom, and like Jane, our challenge is to discover the human being inside.

After watching Dorothy Mills, you will discover that the film has much more going on thematically than I have gone into detail here, out of respect for your experience of discovering the film's secrets for yourself. But the film is all about secrets; it's not merely a movie about what Jane is privy to seeing and knowing, but about what we are, as both film spectators, and as human beings. The film is called Dorothy Mills, but it might be a misnomer to merely understand that as indicating on a simplistic level, that the film is 'about' the character Dorothy Mills. Merlet has much bigger things in her sights and uses a range of genre tropes, codes, and conventions to ask us critical questions about the assumptions we make not only of other people, but also of ourselves.