"We let them watch the first twenty minutes, so they all could see themselves on the big screen, and then we had to drag them out." 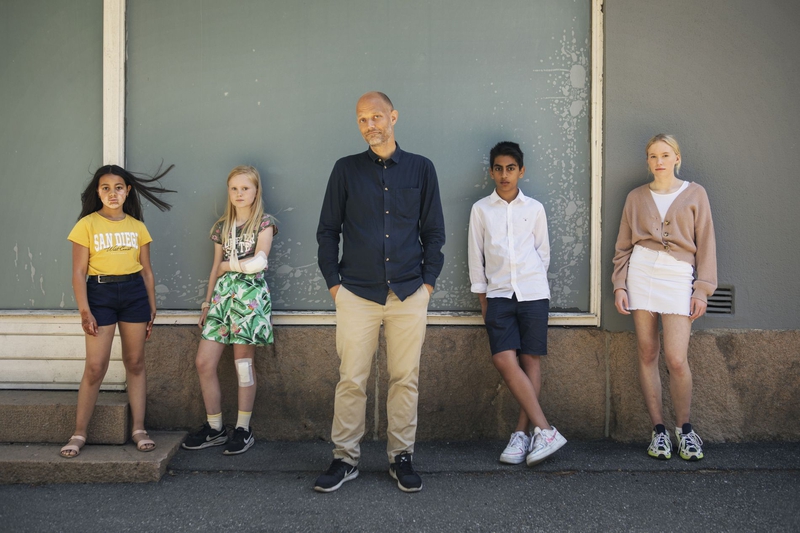 THE INNOCENTS: Vogt and cast.

In the long pantheon of scary-kids movies, there have been few as deeply unsettling and gripping as The Innocents. Coming to theaters and VOD/digital platforms this Friday, May 13, writer/director Eskil Vogt's movie sees its quartet of youngsters getting up to stuff that would be most inappropriate for children their age to watch.

And so it was, Vogt tells FANGORIA, with the exceptional young stars of The Innocents: Rakel Lenora Fløttum, Alva Brynsmo Ramstad, Sam Ashraf and Mina Yasmin Bremseth Asheim, playing a quartet of youngsters who discover they have special psychic abilities—which they don't always use to positive ends. Things were different on set; there was, he notes, "complete transparency and honesty" about what the junior actors—discovered through a year-long search—would be doing during shooting. "First, of course, the parents knew everything before I offered the roles to their children," he explains.

"But I didn't have the kids read the script or tell them everything from beginning to end, because after five minutes, they would be looking out the window. I mean, they were great actors and very motivated, but they were still kids. So I just explained their characters, what they did, how they ended up, and I would answer any question they had truthfully. Since we had so much rehearsal, they had the opportunity to ask anything they needed to know before we were on set actually filming it."

"We'd been working together for months by that point, so we had a real trust in each other. And what I found was that some of the scary scenes were the easiest for them. It was fun, it was play-acting, and they got to do extravagant things. They understood the difference between fiction and reality, and it was all filmed one piece at a time, so it wasn't overwhelming. So they had a lot of fun with the violence when there was violence [laughs], and the stunts and everything."

"But of course," he continues, "I didn't want them to see the finished movie, because that's something else. There were scenes they weren't around for, and when it was all put together with the sound effects and everything, it has more impact. So at the premiere, we let them watch the first twenty minutes, so they all could see themselves on the big screen, and then we had to drag them out kicking and screaming because they wanted to see more! They were running around trying to get a glimpse through the doors or any way they could. They were able to go back in at the end and get the applause, and everyone was so happy to see them there and smiling! But now it's up to their parents to decide when they're old enough to see the whole thing."

Look for more with Vogt on The Innocents later this week!