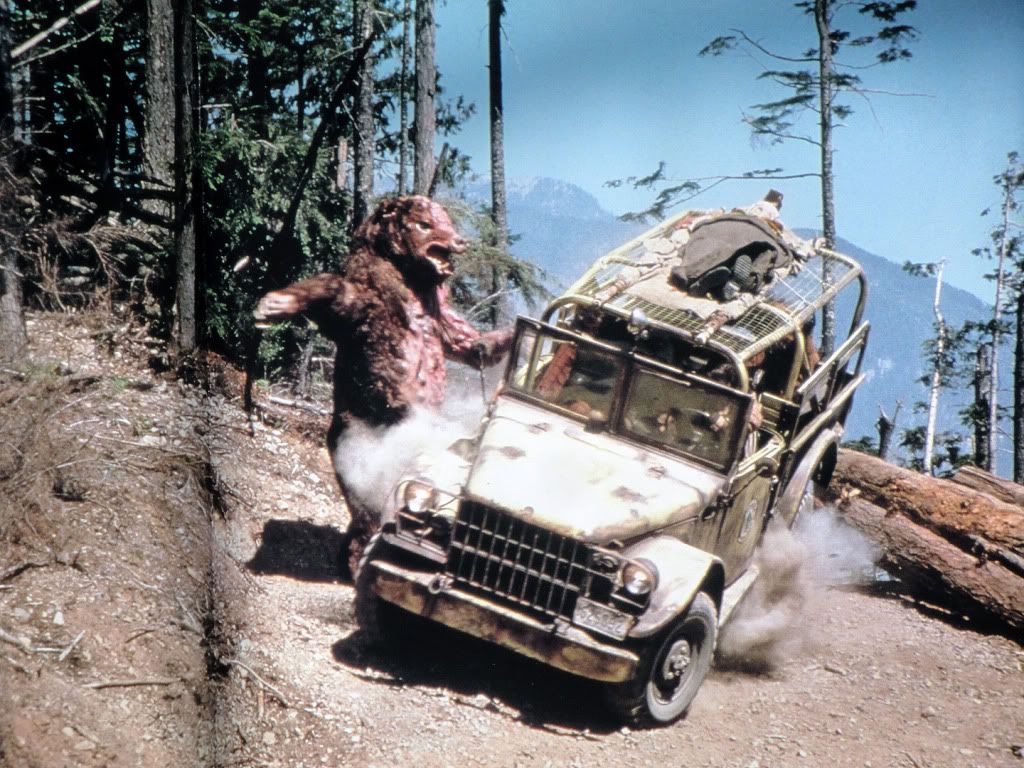 hen it arrived on newsstands in 1979, the first issue of FANGORIA featured pieces on Tom Savini, a new movie called Alien, the 25th anniversary of Godzilla and other expected topics. Most pieces expressed unbridled enthusiasm, but one article sounded more skeptical. Written by Bob Martin, the unfortunately headlined, “Red Man’s Revenge or, Mother Nature Strikes Back” noted some curious coincidences between two films scheduled for release in June: Nightwing and Prophecy, both ecologically themed horror movies that prominently featured Native American characters. In Martin’s words, both featured “[a]n ancient Indian legend… an aging and half-crazed Indian Sage… a virgin wilderness desecrated by the white man’s greed… and nature’s ghastly retribution.” But the parallels didn’t stop there: Both adapted recently published novels, and both were helmed by A-list directors and featured casts and crews filled with recognizable names.

So how did this bit of parallel thinking happen? It seems to have been an unhappy accident rather than one film ripping off the other. Sometimes the prevailing winds blow filmmakers toward the same destination, and in 1979, they tended toward stories of Native American lore and monstrous animals, for some reason. A couple of factors likely played roles. The environmental movement that built momentum throughout the ’60s continued to be both a cultural force and a source of horror and science fiction inspiration in the ’70s, via films like Silent Running, Frogs and Godzilla vs. the Smog Monster. Elsewhere, Steven Spielberg’s Jaws both redefined how successful a movie could be and ushered in a series of beasts-on-the-hunt imitators like Orca and Grizzly. Spielberg’s ascent also gave permission to legitimate directors to get their hands bloody with horror movies. By decade’s end, the trends converged.

It wasn’t a happy convergence. With Nightwing and Prophecy, directors Arthur Hiller and John Frankenheimer, respectively, found themselves out of their elements, straining to make movies that didn’t match the material and struggling with make-up and special effects that could vary wildly in quality from shot to shot. They’re both atmospheric, thoughtful movies filled with details drawn from their settings, but those qualities seem designed to patch over embarrassment at having to deal with, respectively, killer bats and mutant bears.

Of the two, Hiller was the least likely horror director and tried to distance himself from the genre in the lead-up to the film’s release.

“I wouldn’t have taken this job if it were only a film about attacking people,” Hiller told journalist Dick Kleiner while shooting the film. “I see this as much more than that.”

Specifically, he saw it as a conflict between two different Southwestern Native American tribes and their divergent approaches to contemporary life. Adapting Martin Cruz Smith’s novel of the same name, the film swaps out the Hopi tribe for the fictional Maskai, a small, tradition-adhering people whose reservation life contrasts with that of the nearby Pahana (Navajo in the novel), whose leader has embraced the culture of the outsiders and become determined to profit from the decision by selling some sacred land to a mining company. This does not go well, leading to a string of attacks by vampire bats. But are the bat attacks the result of nature being knocked off balance or the fulfillment of an apocalyptic Maskai prophecy?

Ultimately, it doesn’t matter. Hiller fills the film with long, gorgeous shots of the Southwestern landscape and spends time drawing distinctions between the Maskai and Pahana. But none of it seems particularly credible, in part due to the casting. There’s now more widespread awareness of the issue of authenticity in casting than in the 1970s, but even by the standards of the era, it still feels off to have Nick Mancuso in the lead as Youngman Duran, a Maskai deputy, and Stephen Macht as his Pahana antagonist. In dealing with Native American issues, the film always feels like the work of outsiders looking in.

And ultimately it is a movie about killer vampire bats, presented more or less as creatures straight from hell that need to be killed on sight. At least that’s the attitude of visiting scientist Phillip Payne (David Warner, who at least appears to be having fun), who shows up and sets about attempting to destroy the bats with extreme prejudice. As for the bats, some of them look amazing. The handiwork of Carlo Rambaldi, who would help craft E.T. a few years later, they’re convincingly monstrous when seen in close-up — but far less scary when rendered as cartoony bits of animation swarming around actors doing their best to appear scared by empty space.

Hiller began the ’70s with a Best Director Oscar nomination for Love Story then spent the rest of the decade on a wild up-down path that had taken him from flops such as Man of La Mancha to hits such as Silver Streak. Nightwing would be one for the flops column, but 1979 would also see the release of the classic comedy The In-Laws. Hiller had a weird career, one that looked as if he took whatever work came to him even to the end. (His final credit is National Lampoon’s Pucked in 2006.) And sometimes that work involved trying to make the next Jaws out of material that stubbornly refused to be anything but a poky, old-fashioned monster movie with some fancy trappings.

What kind of monstrous consequences?: Try flesh-hungry raccoons for a start then move onto gigantic bears with what appears to be brains on the outside of their skulls. Sound scary? It’s really not, which is sadly only the film’s second-biggest problem. Frankenheimer brings tremendous filmmaking skills to the movie, even attempting to make footage of a paper mill in action seem compelling. But dullness sets in early and never really lifts as the film follows health department agent Dr. Robert Verne (Robert Foxworth) and his cellist wife Maggie (Talia Shire) from Washington, D.C., to the deepest woods of Maine to intervene in a dispute between a local tribe and a logging company run by Bethel Isley (a deeply accented Richard Dysart). Once there, they find themselves troubled by strange noises and the aforementioned violent raccoon before encountering their deadliest foe: the Katahdin.

What’s a Katahdin? In Isley’s words, a legendary creature that’s “sort of a Bigfoot, I guess, only it’s uglier. Larger than a dragon and it’s got the eyes of a cat.” But the legend turns out to be all too real. Or maybe it’s just pollution from Isley’s plant that makes it a reality. Eventually, Robert deduces that run-off mercury has been creating mutant creatures, from giant tadpoles to deformed human infants. The most effective stretch of Prophecy has less to do with mutant bears than Maggie’s slow reckoning that the child she’s carrying might also be a mutant, a mounting horror Shire conveys mostly through silent expressions. If, of course, she survives the Katahdin, that is. And when Robert and Maggie decide to bring a Katahdin cub back to civilization, that prospect becomes even slimmer.

Beyond the dullness, the Katahdin proves to be the film’s biggest problem. On the Scream Factory Blu-ray, special effects artist Thomas Burman recalls having to rush the job to make a deadline, a job he took only after Rick Baker and Stan Winston proved too expensive or unable to work within the time frame. An accomplished designer who had contributed to Close Encounters of the Third Kind and would later work on everything from Body Double to The X-Files, Burman’s no slouch. This seems to be a case of him doing the best he could in a bad situation.

“I think it’s ridiculous but maybe we can do something with it,” he recalls telling Frankenheimer after looking at the design handed to him. Burman also recalls the creature being booed at the premiere, which he blames on rivals at Rick Baker’s studio attempting to sabotage his work. True or not, it’s hard to see anyone being too scared by what appears to be a half-melted refugee from Chuck E. Cheese’s Rock-afire Explosion.

Then again, maybe in a less somber film, it might have worked. Instead, Frankenheimer treats the material with deadly seriousness. Like Hiller, he had been bounced around quite a bit by the 1970s, which found him steadily employed but turning out as many misses as hits. It’s the sort of situation that could lead a director to latch onto whatever felt like it might catch on. And if monster movies with ecological themes were what the public seemed to want, so be it. As with Nightwing, however, it turned out they wanted something else. A brief moment, in which it looked like monster movies that doubled as warnings to take better care of the Earth might be the next big thing, drew quickly to a close.

Keith Phipps writes about movies and other aspects of pop culture. You can find his work in such publications as The Ringer, Mel Magazine, Vulture, TV Guide, Decider, Polygon and The Verge. Keith also co-hosts the podcast The Next Picture Show and lives in Chicago with his wife and child. His all-time favorite horror film is Dawn Of The Dead, but he’s still baffled by the moment when the biker decides to use the blood pressure machine in the middle of the zombie attack. Follow him on Twitter at @kphipps3000.