The Eyes Have It: What Makes The Monster From AN AMERICAN WEREWOLF IN LONDON Really Scary

A look into the monstrous alter-ego of David Kessler and why it's so terrifying. 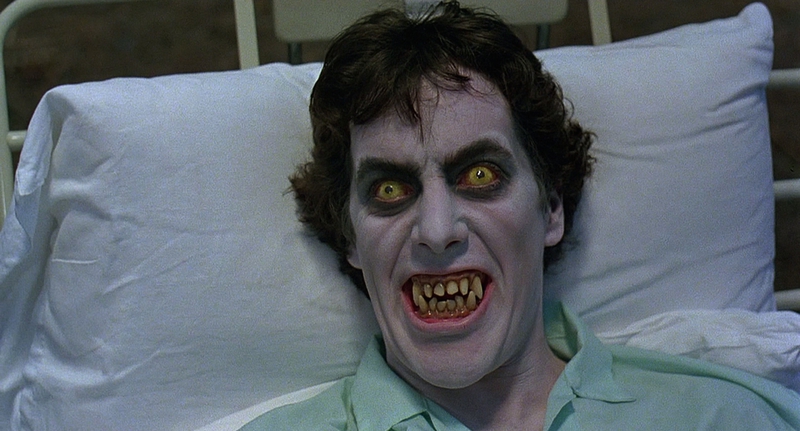 All the better to see you with, my dear. David Naughton in AN AMERICAN WEREWOLF IN LONDON (1981)

No one knows who said "the eyes are the window to the soul," and whoever did probably never imagined that saying used in an article about a film where a bunch of walking corpses sit in a porno theater discussing the best ways to kill themselves. Nevertheless, it's a remarkably true statement which is probably why it's endured for so long. Much like director John Landis' 1981 classic An American Werewolf in London, which this week celebrates forty years of not only carnivorous lunar activities but also the scariest werewolf ever to hit the screen, courtesy of makeup effects genius Rick Baker. And it's all in the eyes.

Just look at one of the most notoriously scary moments in the film, where a peaceful David Kessler (David Naughton) lies in a hospital bed, albeit in the middle of a forest. Jenny Agutter's Nurse Price attends to him, smiling warmly at his serenity, but suddenly David wakes up, turning into a nightmarish demon. It's a shot that terrified me as a child, leading me to conquer my fear by pausing the screen at that moment so I could stare at it until it didn't bother me that much. But while David's teeth are quite upsetting, and a precursor to his eventual lycanthropic canines, it's his bright yellow eyes that make it terrifying, staring out of the screen and directly at the audience, telling them they're going to be in for something truly hairy.

Even the Nazi demons that invade David's dreams and attack his family have those same piercing yellow eyes, and finally, when David makes his legendary transformation, the audience sees why. It's at the turning point, when it goes beyond just growing hair and stretching hands; when David's skull elongates into a snout and Landis inserts an extreme close-up of his eyes looking straight at the audience. Yellow fire surrounds the pupils, reflecting Landis' view of the creature as a four-legged hound from hell as if the eyes contain some remembrance of the terrifying place this monster has been summoned from.

Of course, when the werewolf first inhabited the silver screen, the eyes were strictly human. Artists like Jack Pierce were beholden to the technical limitations of the time and the kind of content they could show in the era of Will H. Hays' Motion Picture Production Code. For Universal's first feature foray into lycanthropy, the makeup in Werewolf of London (1935) made actor Henry Hull look like he was halfway through a transformation. When Lon Chaney, Jr. took up the werewolf mantle for the 1941 picture The Wolf Man, Pierce used the full face makeup he had originally planned for Hull. This gave Chaney's Larry Talbot the hirsute face that became an icon while still allowing him to emote through his actual eyes, similar to Bela Lugosi's Sayer of the Law in another Universal classic, 1932's Island of Lost Souls. 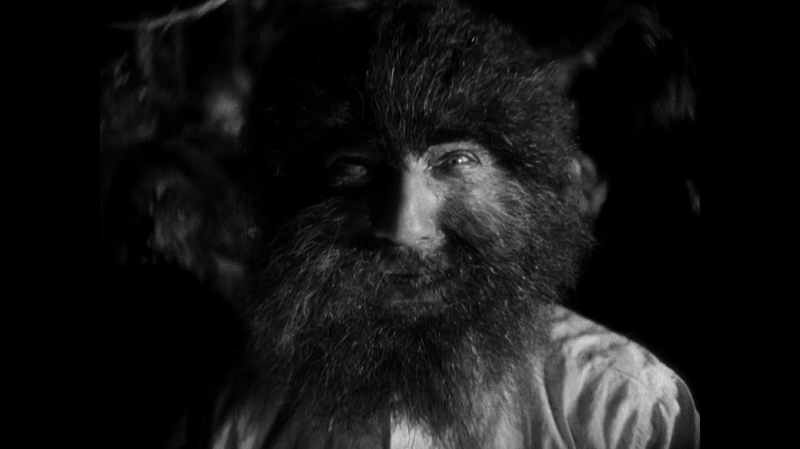 It's well known that Baker was originally going to work on Joe Dante's The Howling, which came out five months before An American Werewolf in London in March of 1981, but instead recommended Rob Bottin, who a year later would spectacularly work his magic on John Carpenter's The Thing. It's an inevitability that both creatures are compared, but Bottin's wolf is very different than Baker's; for a start, it's bipedal. It also has a very different impression, with Bottin's monster spending much longer time on-screen when it attacks both Terri (Belinda Balaski) and Karen (Dee Wallace), both of which are harrowing scenes with credit to not just the actors and Dante's direction, but also the movement of the performer in the suit and the puppeteers.

Bottin wisely used contact lenses, which at that time were thick like glass and fit over the entire front of the eye, as opposed to the easy-fit modern ones anyone can buy in a store today. The eyes were not only creepy but also helped with the budget, being one of two ways to easily show actors in early transformation—the other of course was the monstrous teeth. Unfortunately, the final werewolf makeup for Karen at the end of the film doesn't really work. It's understandable why Dee Wallace wanted her character to turn into something less gruesome, but it just means the emotional impact is lessened.

Baker's wolf, however, was barely meant to be seen at all. "That's one reason he's sculpted with this extreme expression," said the artist in the documentary Beware the Moon: Remembering An American Werewolf in London. "I thought if it's only going to be [seen] this long, let's make it look scary." The expression on the wolf is terrifying, but the way Landis shoots its scenes, you barely see it.

In David's first night of attacks, you only see the monster for seconds at a time, and the predominant image is an extreme close-up of the wolf's face, including those burning eyes. Millisecond-long near-subliminal inserts of the creature staring right at the audience are cut in after the deaths of Harry and Judith and the three homeless folks Alf, Ted, and Joseph. The result being that you think you've seen more than you have because of such an extreme image, likened to the flash images of the demon Pazuzu William Friedkin used in his 1973 masterpiece The Exorcist. Further shots of the wolf are more abstract, such as the shot from the top of the escalator as it approaches Gerald Bringsley, where, just for a second, the audience sees just how big the creature is.

At this point, our brain has been processing these different images in our head to come up with an idea of the wolf; we do the same during the first half of Jaws (1975) to give us an idea of how big the monster shark is, or what exactly the extra-terrestrial menace in Alien (1979) looks like. But the first time we get a good shot of the monster is when the copper sees it in the cinema, around ten minutes from the film's end. It's a truly bloodcurdling moment, not least because it's eating the poor usher's entrails, but also because the eyes and the huge blood-stained canines standing out like neon lights in the darkened room, we can't help but imagine what it would be like if it ate one of us.

Quick shots of the wolf are then seen as it marauds through Piccadilly Circus via George Folsey, Jr.'s suitably manic editing, and as it's cornered in the alleyway, the film shows us our monster up close. But here, we get an unexpected reaction from the wolf as Alex pleads with it—with David—and says that she loves him. Landis puts in a reaction shot of an extreme close-up of the eyes where, for a second, that intense expression of violence and death leaves the wolf's face, and the eyes open up. David is fighting this.

But as we all know, the wolf overcomes him, and he is shot and killed, leaving behind the bloodied corpse of a human. But what stays with us as The Marcels wail over the end titles is the tragedy that this horrific beast, this terrifying monster from the depths of hell, was just a man, trapped. Cursed. And that not even love could save him. And that's truly scary.